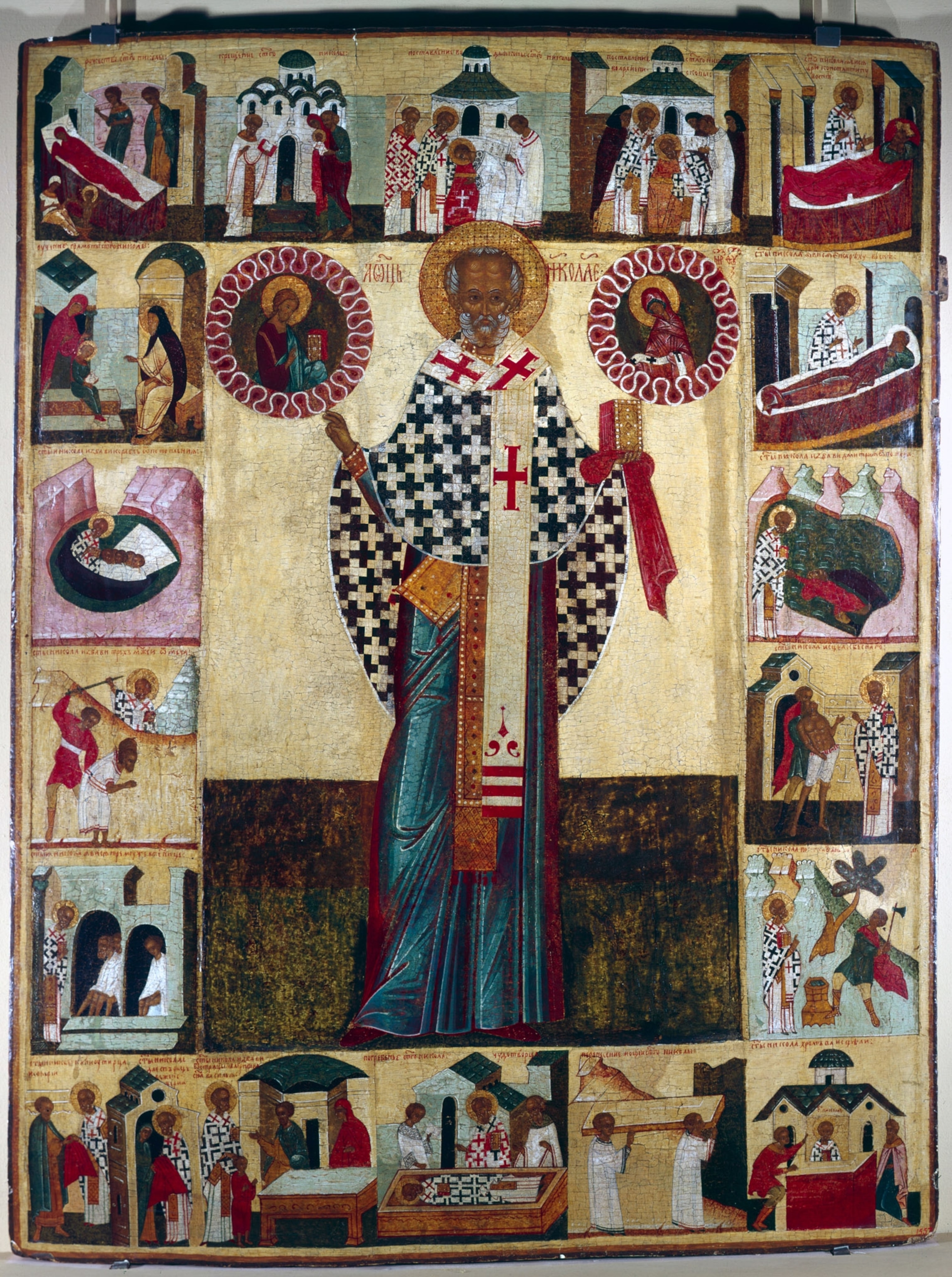 How Christmas has evolved over centuries

People around the world celebrate the birth of Jesus Christ on December 25. Here’s why—and the history of its iconic symbols from Christmas trees to Santa Claus.

There's no more recognizable Christmas symbol than Santa Claus—a jolly bearded man who also goes by Saint Nick. Santa is based on St. Nicholas, a third-century Greek bishop associated with December gift-giving. In this Russian icon, St. Nicholas is surrounded by scenes from his life.
HIP, Art Resource

Christmas is both merry and bright—but how did it become so popular? Laden with tradition and brimming with festivity, the Christian holiday, observed in most of the world on December 25, celebrates the birth of Jesus Christ in Bethlehem.

In modern times, it has become an increasingly secularized holiday marked by a season of good cheer and festive family fun, punctuated by traditions culled from a variety of cultures. Here’s how Christmas came to be, and what’s behind some of its most cherished customs.

When was Jesus Christ born?

The Christian gospels do not mention the date of Jesus’ birth, known as the Nativity. They do tell the story of his immaculate conception and humble birth.

According to the gospels, Jesus’ mother, Mary, was a virgin selected by God to bear his only son. After learning Mary was pregnant, her fiancé, a carpenter named Joseph, wanted to cancel their engagement. But an angel appeared to him in a dream and told him not to be afraid. The newlyweds then made an arduous journey to Bethlehem to participate in a mandatory census. (How the Advent season evolved as a countdown to Christmas.)

The influx of visitors to Bethlehem meant that there was no lodging for the expecting couple to rent. After an innkeeper took pity on them and let them sleep in his stable, Mary gave birth to the son of God. She lay him in a manger as angels sang and a bright star began shining in the sky.

Historians disagree on how December 25 became associated with Christmas. However, by A.D. 336, Christmas was celebrated by the Christian church in Rome on that day, which coincided with the Roman winter equinox festival of Saturnalia. (Here’s why some people celebrate Christmas in January.)

Winter festivals had existed worldwide since ancient times, and eventually many of those festivals’ traditions became linked with Christmas. For example, the Germanic solstice festival of Yule featured banquets and celebration, and Celtic Druids held a two-day solstice festival during which they lit candles and decorated their homes with holly and mistletoe.

Over time, Christmas gained popularity—and new traditions. In medieval England, Christmas was a 12-day festival involving all kinds of revelry, from plays to wild feasts to pageants celebrating Jesus’ birth. Music, gift giving, and decorations all became the norm.

The most extravagant feasts were celebrated by monarchs such as Henry III, whose guests gorged themselves on 600 oxen at one 13th-century Christmas feast. Universities would crown a “Christmas King” or “King of the Beans” who “ruled” his peers during the holiday season, and even the most modest celebrations included hymns and carols.

But not everyone relished the celebrations. In 1644, English Puritans banned the festival, prompting rioting and helping stoke England’s second civil war.

England did not have a monopoly on Christmas. Celebrants all over the world incorporated customs from their wintertime festivals into the holiday—perhaps none more so than the Germans.

Germany is credited for giving birth to one universal symbol, the Christmas tree, which evolved from the pagan tradition of decorating with tree branches. Germans called their version, an indoor pine tree adorned with candles and presents, a Tannenbaum. The tradition took flight in the 19th century, when the British royal family, who had German roots, put up a Christmas tree and started a global trend. (The surprising history of Christmas trees.)

In Germany—the originator of many other traditions, such as Advent wreaths, nutcrackers, and Christmas markets—Christmas was shaped by political forces too. In the 1930s, the Nazis attempted to redefine the holiday as a non-Christian celebration of the Third Reich.

The U.S. falls in love with Christmas

Like in England, American Puritans banned Christmas, in Massachusetts in 1659, only lifting the ban in 1681. In the United States, Christmas was not celebrated with much gusto until the Civil War, which reinforced for many the importance of home and family. In 1870, after the war’s end, Congress made Christmas the nation’s first federal holiday.

Meanwhile, as immigrants flooded into the U.S. in the latter half of the 19th century, they brought their own traditions with them. As Christmas historian William D. Crump writes in The Christmas Encyclopedia, this created “a kind of Christmas melting pot, with assimilation of various cultures into a more uniform and widely celebrated holiday at home with the family.”

One of those cultural icons that immigrants brought with them would become a distinctly American celebrity—Santa Claus.

One of the most popular figures of a modern Christmas is Santa Claus, the round-bellied, white-bearded patriarch who takes a reindeer-driven sleigh to deliver presents to good children the world over. The character is based on St. Nicholas, a third-century Greek bishop who became associated with December gift-giving. (How St. Nicholas became known as Santa Claus.)

Santa came to the U.S. with German and Dutch immigrants in the 18th and 19th centuries. He was popularized in stories by American authors such as Washington Irving and Clement Clarke Moore—whose poem “A Visit from St. Nicholas” is perhaps better known by its opening words, “Twas the night before Christmas.”

Santa’s iconic look was propagated by illustrator Thomas Nast, who drew on European folk tales to create a Santa whose popularity soon spread around the globe. In 1890, merchant James Edgar started an indelible custom when he dressed as Santa and greeted children in the aisles of his Brockton, Massachusetts, department store. The idea took off, and Santas have frequented department stores (and more recently, malls) ever since.

The origins of other Christmas customs

Light has always been a part of winter festivals, with their signature long, dark nights. Electric Christmas lights are a modern spin-off of the old-fashioned candles that Germans placed on their trees. Thomas Edison, inventor of the lightbulb, is credited as the inventor of the first strand of lights. In 1882 his business partner, Edward H. Johnson, created the first Christmas tree illuminated with colored lights.

American innovation also shaped the always popular tradition of exchanging gifts on Christmas. In the 20th century, commercial gift wrap replaced brown-paper wrapping when Rollie B. Hall, whose brother had founded Hallmark Cards, used stylized French envelope liners after running out of tissue paper at his store. Hallmark had a hand in the modern Christmas card, too, riffing on the late 19th-century’s small printed cardboard cards to create a larger one with a book-like format perfect for personalized sentiments.

Gifts, cards, and decorations are all well and good, but for many, Christmas isn’t complete without their favorite foods. Gingerbread houses gained Christmas popularity in the early 19th century after the Brothers Grimm published Hansel and Gretel, in which two children are kidnapped by a witch who lives in a house with walls made of gingerbread and other sweets. From fruitcake to wassail punch, each culture has its own spin on what’s considered Christmas food. (15 Christmas dishes from around the world.)

Though Christmas has religious origins, it’s become a secular—and increasingly commercialized—holiday. That’s sparked concern for centuries, says historian Lisa Jacobson. “People have complained about the excessive commercialization of Christmas ever since its [modern] incarnation in the mid-19th century,” she tells the University of California Santa Barbara’s The Current. “I don’t think that ambivalence has ever entirely disappeared.” (See how Christmas is celebrated around the world.)

Those who fear the holiday has strayed from its religious roots have a point. In 2019, more than nine in ten Americans polled by Gallup said they celebrate Christmas—but just 35 percent said they saw the holiday as “strongly religious.” But with its mishmash of pagan and religious traditions, the holiday offers something—whether holy or not—for everyone who celebrates it.