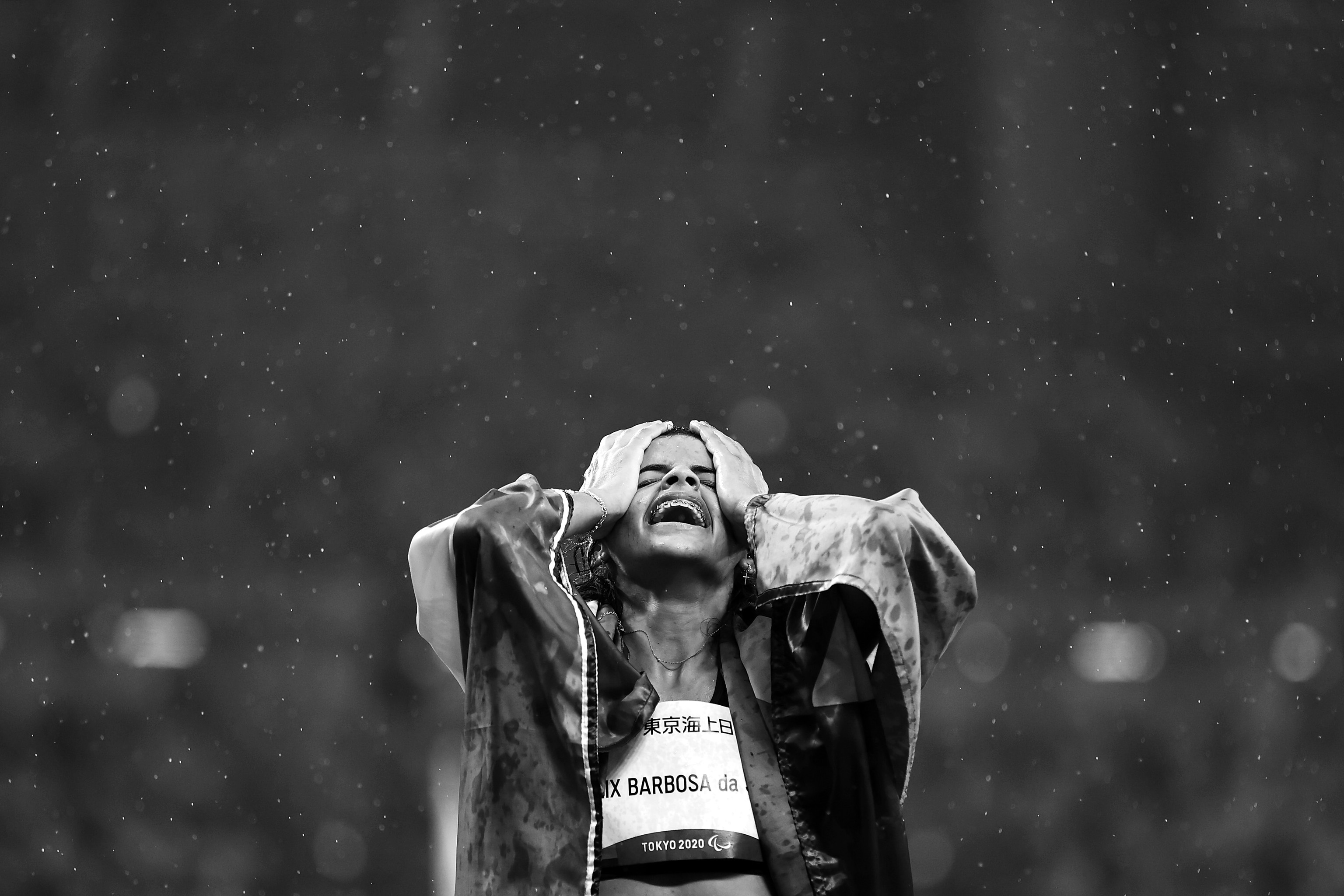 How the Paralympic movement evolved into a major sporting event

First founded as an archery contest for 16 disabled veterans, the games now rival the Olympics as an athletic spectacle.

Jardenia Felix Barbosa da Silva of Team Brazil celebrates after winning the bronze medal in the Women's 400m - T20 at the 2020 Paralympic Games in Tokyo, Japan. The T20 refers to the race's disability classification.
Photograph by Kiyoshi Ota, Getty Images

Jessica Long is one of the most decorated athletes in the United States. The 29-year-old swimmer won four medals at the 2020 Tokyo Paralympic Games, bringing her total count to 28. For years, the games have given her the chance to compete at the highest level—and something to look forward to every four years.

“Since I was 12, when I won my first gold in Athens, I wanted people to know what the Paralympic Games were,” says Long, whose lower legs were amputated when she was a baby due to a congenital condition. “Each year the excitement and the build-up for the Paralympic Games has grown more and more. Here in Tokyo, this is one of my favorite Paralympics I’ve ever attended.”

Participation in the Paralympics is at an all-time high. At the Tokyo games, which began on August 24 after the conclusion of the Olympics, more than 4,500 athletes from 163 countries are taking part, marking the largest number of athletes to compete in the games at once.

The Paralympic Games are relatively new compared to the Olympics. But the event has evolved dramatically from its beginnings. Every four years the International Paralympic Committee (IPC) has included more athletes with a wider array of disabilities, and from a larger number of  countries, playing more sports.

The first Paralympic Games were played in 1948, although sporting activities for athletes with physical impairments had existed for at least 60 years before that. Deaf athletes created their own sports clubs in Berlin as early as 1888.

But the idea of competitions for disabled athletes didn’t spread widely until World War II, when it became a way to assist injured veterans and civilians. Ludwig Guttmann, a doctor who ran a spinal injury center in Great Britain, spearheaded the movement.  He believed that participating in athletics would be a form of mental and physical rehabilitation. Concerned that people with disabilities were often neglected, Guttmann saw sports as part of “the social reintegration of the paralyzed into society.”

“I found that sport for the disabled has a tremendous effect on the social point of view,” Guttmann said in an interview on the IPC website. “When I saw how sport is accepted by the paralyzed it was logical to start a sports movement.”

In 1948, on the same day as the opening ceremonies for the Olympic Games in London, Guttmann organized the first contest for impaired athletes, which he named the International Wheelchair Games. Sixteen ex-servicemen and women in wheelchairs competed in archery during the games.

The games became an annual event, each year expanding to more athletes. Javelin throwing was soon added to the lineup. The name changed to the Stoke Mandeville Games, after the hospital where Guttman worked, and in 1952 the Netherlands sent a team, making the competition international.

In 1960 the Stoke Mandeville Games officially became the Paralympic Games. That year, more than 400 athletes with disabilities from 23 countries gathered at the Olympic Stadium in Rome following the conclusion of the Summer Olympics. They competed in archery, basketball, swimming, fencing, javelin, shotput, club throwing, swimming, table tennis, pentathlon, and even snooker.

Since then, the Paralympics have been held immediately after the Olympics in the same host city. The name “Paralympics” reflects the games’ parallel nature: It comes from the Greek preposition "para," which means "beside.” The Olympics and Paralympics exist in tandem.

The growth of the Paralympics was swift. At the 1976 games in Toronto, over 1,500 athletes from 40 countries participated in 13 different sports. That year also saw the first Winter Paralympic games, which were held in Sweden. By the 1988 Paralympics in Seoul, the Paralympics were using the same facilities as the Olympics. By 1996, the Atlanta games were billed as “The World’s Second Largest Sporting Event” and the games were televised.

The increased exposure to the event led to more inclusivity. Guttman’s games had been designed for veterans with spinal injuries. Eventually the games opened to civilians, but they were still limited to participants with spinal injuries. By in 1976, athletes with disabilities beyond spinal cord injuries—for instance, amputees and those with vision impairments—were invited to compete.

That raised the question of how to make contests fair—so the least-disabled person wouldn’t always win. Paralympics organizers started to classify competitors by the extent and type of their disabilities. The classifications fall into three broad categories—physical, visual, and intellectual—and determine whether athletes are eligible to compete in a sport and how competitors are grouped together for events.

For Long, the games have been a gift. She now holds the second most medals of any Paralympian—and the same medal count as Olympic swimmer Michael Phelps. “I don’t know where life is going to take me,” she says, “but the Paralympic movement has given me this entire, wild, amazing journey.”