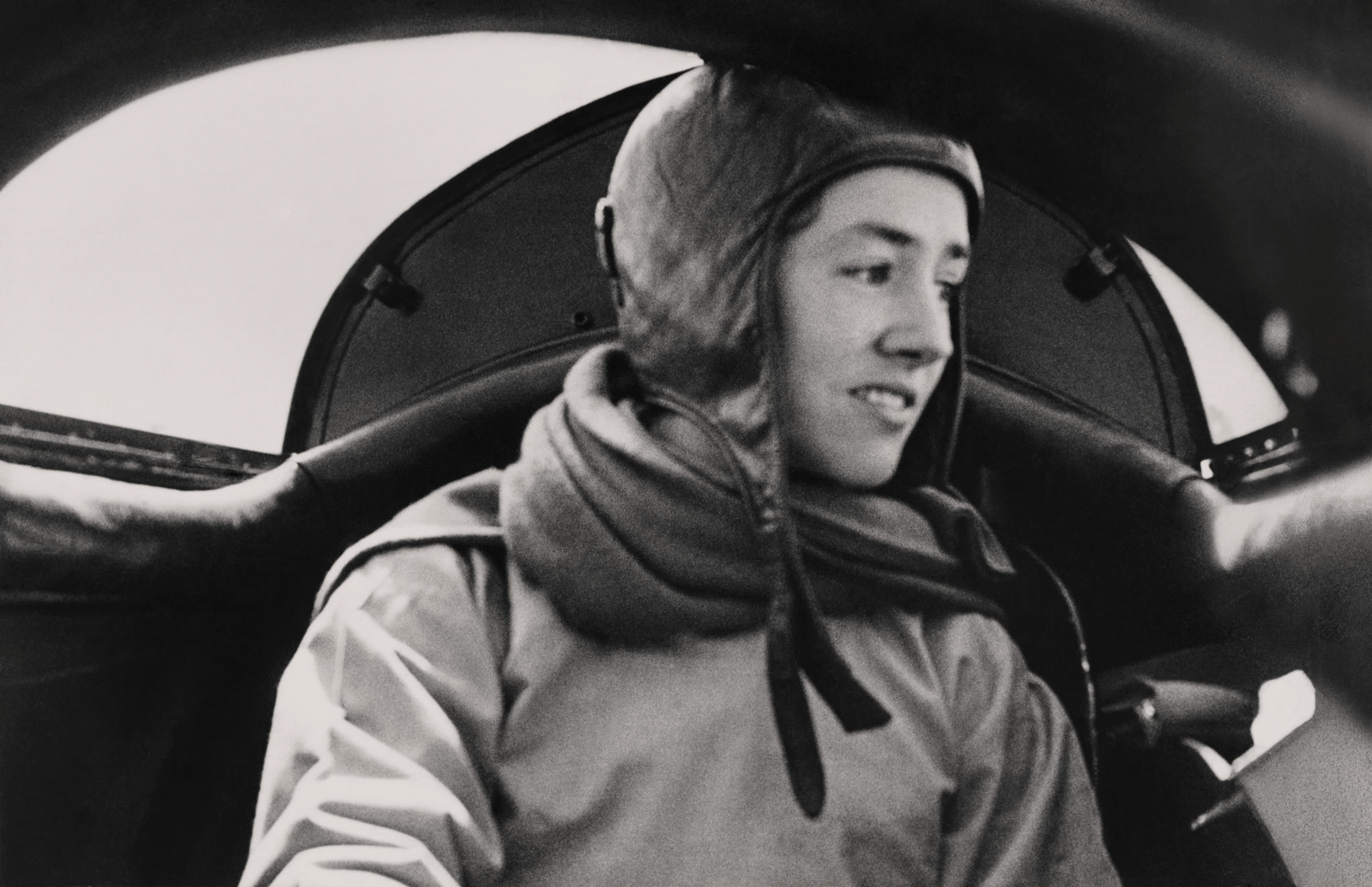 Taking a break from operating the flight radio, Anne Lindbergh pilots the Tingmissartoq, as she and her husband, Charles, fly over Sweden. The pair were crossing the northern Atlantic Ocean in 1933.
Photograph by Charles and Anne Lindbergh, Nat Geo Image Collection
This is part of a weekly series for Women's History Month that tells the behind-the-scenes stories of trailblazing women at National Geographic. Read more profiles in the March 2020 issue.

Anne Morrow’s first date with Charles Lindbergh was in an airplane over Long Island in 1928. Her suitor had just made the first solo, nonstop transatlantic flight and was arguably the most famous man in the world. They had met the year before in Mexico City, where her father was ambassador, while Lindbergh was passing through on a tour of Latin America. He had offered to take her family on a ride in his five-passenger plane.

“Suddenly I felt the real sensation of going up—a great lift, like a bird, like one’s dreams of flying—we soared in layers. That lift that took your breath away—there it was again!” she wrote in her diary. “I will not be happy till it happens again.”

They had only two more dates before getting engaged. Three months after their wedding, Anne made her first solo flight. In 1930 she was the first woman in America to earn a first-class glider pilot’s license.

That year Charles and Anne flew from Los Angeles to New York in 14 hours and 23 minutes, breaking the transcontinental speed record. Anne was co-pilot, radio operator, navigator—and seven months pregnant. Although the plane’s fumes made her feel sick, she couldn’t complain. “It would prove I’m a weak woman,” she later said.

Then they flew to Japan, where Anne set a record for long-distance radio communication. The media began calling them “the First Couple of the Skies.” Anne gained recognition as an aviator and author in her own right, publishing a series of books that detailed the pair’s adventures in the air. Listen! The Wind recounted 10 days of a six-month survey of Atlantic flight routes in 1933, from New York to Africa and then on a perilous 16-hour direct trip to South America. The account, the New York Times Book Review wrote, “is a record of technical achievement, a record historically valuable; in Anne Lindbergh’s hands it becomes literature.”

In 1934 she was the first woman awarded National Geographic’s Hubbard Medal, for flights totaling 40,000 miles. The next year, the president of Smith College granted her an honorary master’s degree, saying she had “proved to an admiring world the compatibility of imagination and practical dexterity; of sensitiveness and fortitude; of modesty and daring; the pride of her college, the glory of her country.”

By then, the couple’s lives had darkened. The all-consuming media and public obsession reached a tragic crescendo when, in 1932, their infant son was kidnapped and murdered. A photographer who managed to get a picture of the dead baby was selling $5 copies. Threats and extortion bombarded the Lindberghs. Desperate to escape the spotlight, they moved to England. Then Charles became enamored of Germany’s technological advances. He accepted a medal from the Nazi regime and became a vocal opponent of the U.S. entering World War II. Anne wrote a book in support of isolationism and called fascism the unstoppable “wave of the future.”

The once adoring public—and Anne’s own mother—turned against the couple. In later interviews and published diaries, Anne regretted their stance, which she described as being mostly her husband’s. “My marriage has stretched me out of my world, changed me so it is no longer possible to change back,” she wrote.

She found redemption through writing. In 1955 she released Gift From the Sea, a reflection on women’s lives that was lauded as a feminist manifesto, became a finalist for the National Book Award, and topped best-seller lists for 80 weeks. Her personal experience—of living with a man who was controlling, sometimes cruel, and was later found to have three secret families in Europe—surely bled into her writing.

Back at Smith College to receive an honorary doctorate, in 1970, Anne embraced her next cause: the environment. A crisis, she told an audience, was “encroaching on us like a lava flow.” She urged the young students to seek solutions to the degradation that could soon affect the idyllic campus around them. Reversing the trends, she said, “will take a revolution.”

In 1979, five years after Charles’s death, Anne was inducted into the National Aviation Hall of Fame. In an interview with the New York Times, one of her daughters said, “Some people think my mother, all 90 pounds of her, is a fragile woman…She’s about as fragile as a bar of steel.” Anne outlived Charles by 22 years, editing and writing in seclusion in Connecticut.