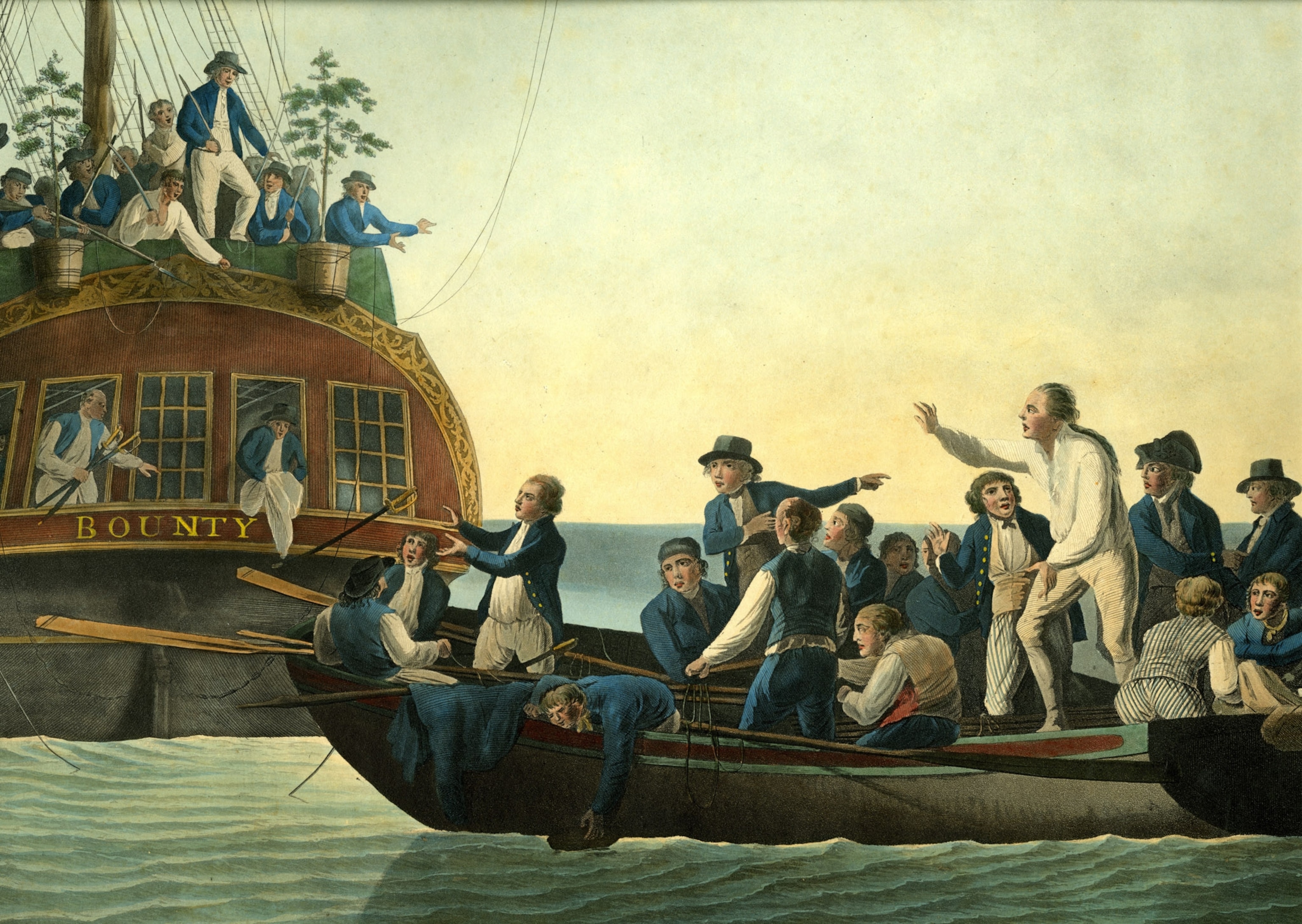 The real story behind the infamous mutiny on the H.M.S. Bounty

The British naval crew’s rebellion is legendary. But here’s what happened afterward—from marooned mutineers to court-martials.

On April 28, 1789, the men aboard the H.M.S. Bounty, a British naval vessel commanded by Captain William Bligh, mounted a legendary mutiny. Having spent several idyllic months on the island of Tahiti, the men wanted to build a permanent settlement in the South Pacific.
Painting by Robert Dodd, Bridgeman Images

Idyllic islands. An epic journey. A rebellious crew. When the H.M.S. Bounty set sail from England in November 1787, its captain and crew could never have anticipated that their peaceful voyage would end with court-martials, marooned mutineers, and generations of settlers on a far-flung island in the South Pacific.

Now famous for its mutiny, the Bounty has become a big-screen legend, spawning five feature films in the 20th century alone. But the ship’s voyage, and it's unforeseen consequences, were very real.

The Bounty sets sail to Tahiti

The Bounty was a vessel of Britain’s Royal Navy, but its mission was peaceful. Veteran captain William Bligh had been tasked with a voyage to gather breadfruit, a tropical fruit related to the fig that the British crown thought would make cheap, nutritious rations for the enslaved workers at sugar plantations in the British West Indies.

Carrying a crew of 46, including two botanists, the ship had no commissioned officers except for Bligh and sailed alone, lacking the protection of other British vessels. But Bligh anticipated a peaceful journey to Tahiti, which had been visited by Captain James Cook in 1769 and was viewed by British mariners as a breadfruit-laden paradise.

In October 1788, after a storm-tossed journey spanning 10 months and 27,000 miles, the Bounty finally reached Tahiti. It was as idyllic as the Bounty’s crew had been told it would be, and they took full advantage of it. They were welcomed by the Tahitians, who traded with them and even took them into their homes. They also formed attachments to the island’s women, who sold sexual favors in exchange for items like nails.

By day, the crew gathered breadfruit and tended the plants; by night, they reveled. Over the course of five months on the island, more than 40 percent of the men were treated for sexually transmitted diseases that had been imported to Tahiti years before by English and French explorers.

When the Bounty set sail again on April 1, 1789, the seeds of mutiny had already been planted. The men had experienced Tahiti as a paradise, and Bligh, who was widely known as a strict disciplinarian, was frustrated by his crew’s lack of discipline. The captain was “fault-finding, insulting, petty and condescending” on the journey, writes Bounty expert and author Sven Wahlroos, and “seems to have relished humiliating all his officers.” He singled out his master’s mate Fletcher Christian, scapegoating and punishing him in front of the crew. On April 27, he accused Christian of stealing from the Bounty’s stash of coconuts and punished the entire crew for the theft.

Though historians still argue about the true cause of the mutiny, they agree that for Christian, his captain’s accusation was the final straw. On April 28, a group of mutineers led by Christian armed themselves with the Bounty’s muskets and burst into Bligh’s cabin, taking him prisoner. “I have been in hell for weeks past with you,” Christian reportedly told Bligh.

Chaos ensued and the ship’s crew split into two factions, one loyal to Bligh, the other determined to desert. The 23 mutineers put the captain and 18 other men on a boat, gave them some rations and a sextant to help them navigate, and set the boat adrift. The Bounty was under rebel command.

Christian and his crew, which included a few captives who remained loyal to Bligh, wanted to build a permanent settlement and set their sights on the Tongan island of Tubuai, about 400 miles south of Tahiti. There they met and killed a group of hostile native islanders, then went back to Tahiti to seek laborers and supplies. Certain that the Tahitian chiefs, who had good relations with Britain, would refuse to help them if they knew what had happened, the mutineers covered up the mutiny, lied about their mission, and returned to Tubuai with 30 Tahitians. But they gave up the fight for Tubuai after continued hostilities with the islanders and growing divisions among the crew made a takeover unsustainable.

The mutineers returned to Tahiti, only to find that their lie had been discovered. Desperate and cornered by a new plot to mutiny against him, Christian lured a group of Tahitians onto the Bounty for a party, then took them captive and set sail again. Sixteen British sailors were left behind in Tahiti.

Meanwhile, Bligh and his loyalists were on a wild journey of their own. At first, they headed for a different Tongan island, but abandoned it after hostile encounters with its native residents, who stoned the ship’s quartermaster to death. With dwindling rations, the group set out for a Dutch settlement in Timor, some 3,500 nautical miles away. After 47 days they arrived and reported the mutiny to the Crown.

Several died on the way home to England, but Bligh survived. “I have lost the Bounty,” he wrote to his wife before his journey home. “My conduct has been free of blame, & I showed everyone, that tied as I was, I defied every Villain to hurt me.”

At home, Bligh was court-martialed and acquitted of responsibility for the loss of the ship. H.M.S. Pandora then set sail from England on a mission to capture the mutineers. When the crew arrived in Tahiti in March 1791, they captured the 14 surviving mutineers whom Christian had abandoned. But the Pandora ran into a disaster of its own when it foundered on the Great Barrier Reef, and four of the shackled captives drowned.

In September 1792, the 10 men who had been brought back to England faced court-martial. Under English law, any man who remained on the ship was guilty of mutiny regardless of whether he had actively participated. Four were acquitted, and six sentenced to death by hanging. Three of those six were ultimately pardoned, but the other three mutineers—Thomas Burkett, John Millward, and Thomas Ellison—were hanged on October 29, 1794.

By this time, the remaining mutineers and their Tahitian captives had found a safe haven on Pitcairn Island, a far-flung island in the southern Pacific. The verdant, uninhabited island seemed like a potential paradise, and the mutineers soon burned the Bounty and set up a permanent colony there.

But the tensions that had marred their voyage persisted on the island. The Tahitians the mutineers had taken captive resented the English men’s abuse of the women, whom they treated as sexual possessions. One of the Tahitian women, Tevarua, is thought to have killed herself in response to her ongoing mistreatment. In September 1793, the Tahitian men killed four of the eight mutineers, including Christian. Within the next decade, all but one of the remaining mutineers, John Adams, died.

In the years that followed, the mutineers’ descendants set down roots on Pitcairn Island, though they abandoned and returned to the island multiple times in search of supplies and more productive land. Those descendants still live on the tiny island, which is a British Overseas Territory with a population of around 50. In 1957, National Geographic Explorer Luis Marden found what remained of the Bounty off the island’s east coast.

Today, the story of the Bounty is remembered for its infamous place in Britain’s colonial history as much as its adventure and drama. Between disease, the arrival of Christian missionaries, and the sexual exploitation of women, historian Diana Preston told National Geographic in 2017, European explorers “effectively destroyed all the things that people had found exotic and attractive about Tahitian culture.”