It was planned as a Native American-governed state, until politicians folded Indigenous lands into Oklahoma—a decision that still impacts life there today.

Its name is derived from a Choctaw term for “red people,” yet Oklahoma’s nickname—the Sooner State—comes from the white settlers who descended on it to claim Native lands. That tension is nothing new: Once divided into one territory for whites and another for Native Americans, Oklahoma has not buried the legacy of its frontier past.

In July 2020, the Supreme Court ruled that, despite its location inside a U.S. state, much of eastern Oklahoma is an Indian reservation. The landmark decision is the latest foray in a long battle over who should own and inhabit Oklahoma’s prairies and mesas—a battle that almost led to Oklahoma becoming two different states.

The conflict was born in the southeastern United States, the ancestral lands of the Cherokee, Chickasaw, Choctaw, Muscogee (Creek), and Seminole people that spanned from modern-day North Carolina to Mississippi. In the late 18th and 19th centuries, the white settlers who flooded the area dubbed these nations the Five Civilized Tribes due to their willingness to develop economic and social ties. Nonetheless, these white newcomers pressured the U.S. government to push Native Americans out of their lands.

Counties with 10% or higher

In July 2020, the Supreme Court ruled that

much of eastern Oklahoma fell within an Indian

reservation. The ruling meant that Native

Americans living in that territory were under the

legal jurisdiction of their own nation rather

than the state of Oklahoma. Legal experts 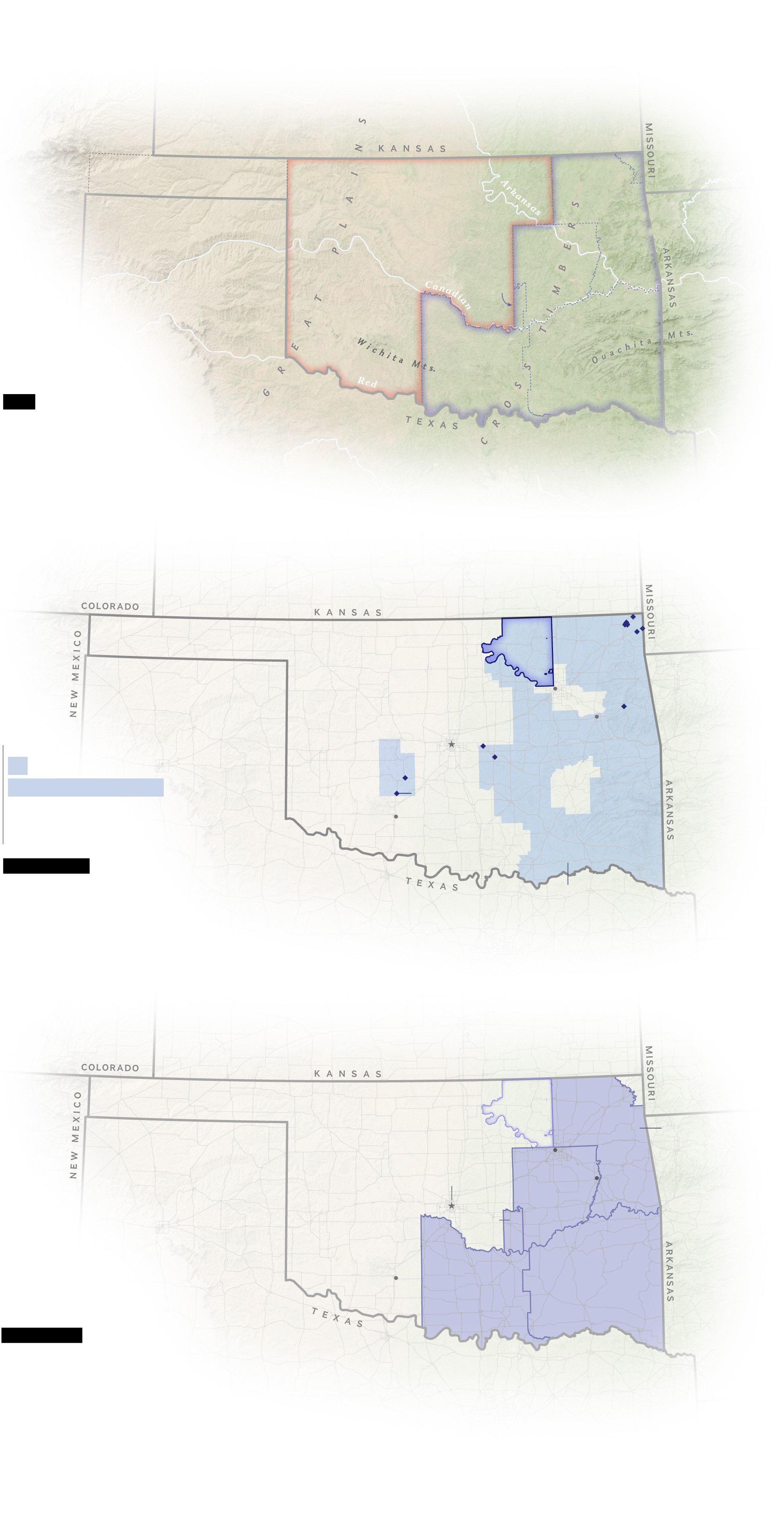 In July 2020, the Supreme Court ruled that much of

eastern Oklahoma fell within an Indian reservation. The

ruling meant that Native Americans living in that territory

were under the legal jurisdiction of their own nation rather

than the state of Oklahoma. Legal experts believed non-

native populations would not be affected.

In 1830, Congress passed the Indian Removal Act, which allowed then president Andrew Jackson to grant Native American tribes land out west in exchange for their ancestral lands. Under duress, the Five Tribes signed a variety of treaties ceding their lands in exchange for promises like an 1833 treaty that guaranteed “a permanent home to the whole Creek nation of Indians.”

Though many went without resistance, others refused and were driven from their homes at gunpoint. Between 1830 and 1850, about 100,000 Native Americans were relocated—a forced migration known as the Trail of Tears.

Their new home was located a thousand miles away in Indian Territory, the area west of the Mississippi and east of the Rockies. There, the Five Tribes settled onto land in what is now central and eastern Oklahoma alongside 21 other tribes. Over the years, the United States claimed more Native land and Indian Territory shrank to roughly the boundaries of modern-day Oklahoma. (See how photography has helped heal this this Indigenous community in Oklahoma.)

In the 1880s, it shrank even further when the U.S. switched from a policy of removal to allotment, a system designed to force Native assimilation into white culture by dividing their traditional communal lands overseen by tribal governments into small, individually owned properties. The Five Tribes were excluded from the policy, but the lands of other tribes in western Oklahoma were carved into tiny portions and doled out to individuals, many of whom sold their shares to white settlers or the U.S. government.

White settlers also sought to take over the area they called the Unassigned Lands, a two-million-acre swath of central Oklahoma the U.S. had forced the Muscogee and Seminoles—who had sided with the Confederacy during the Civil War—to cedemore than a decade earlier. Would-be settlers known as the Boomers squatted on the land and, after years of lobbying, the federal government agreed to open it to white settlement in 1889.

Fifty thousand white settlers flooded into surrounding areas, waiting for the land to open on April 22, 1889. (Some illegally entered beforehand and were given the nickname “Sooners.”) At noon, they surged over the borders to make their claims. In a single day about eleven thousand homesteads were claimed.

A little more than a year later in 1890, the federal government created Oklahoma Territory from the Unassigned Lands and the western Oklahoma lands. White settlers were eager to turn the territory into a state to gain representation in Congress. But both the settlers and Congress were split on how to proceed. Seeing the eventual acquisition of the Five Tribes’ land as a foregone conclusion, they argued about whether Indian Territory should join with Oklahoma Territory or as a separate state.

As these debates raged, white settlers continued flocking to Oklahoma—and into Indian Territory, where they were allowed to settle on surplus lands they purchased from tribal governments. Eventually, they far outnumbered Native residents.

The federal government cleared the way for statehood in 1898 with the Curtis Act, which announced that tribal governments would be abolished in March 1906 and forced the Five Tribes to accept the allotment law from which they’d been exempt. Five Tribes leaders realized they would soon have no control or federal recognition. In a last-ditch effort to retain their sovereignty, they held a convention to form a state of their own.

In August and September 1905, delegates drafted a constitution and a proposed government for a proposed Native American-governed state they called Sequoyah. But though a referendum in Indian Territory passed by an overwhelming margin of both Native and white voters, Congress never voted on the issue.

It came down to politics—the Republican-led Congress and Republican President Theodore Roosevelt worried that the state would elect Democratic Senators due to the area’s history of Southern alliances. But as historian Barbara A. Mann notes, Sequoyah was also unpalatable to white lawmakers who desired a state governed by and for white citizens. (Native American imagery is all around us—while Indigenous people are often forgotten.)

Instead, Congress passed the Oklahoma Enabling Act of 1906. This new law settled the debate over statehood by inviting representatives to write a state constitution, choose a capital, and move forward with a state that combined both Oklahoma and Indian Territories. On November 16, 1907, Oklahoma became the nation’s 46th state.

Today, more than 13 percent of Oklahomans are Native American, and Oklahoma has the second highest number of Native Americans of any state. But over the years a debate has arisen as to whether the state’s eastern region can still be considered Native land as more and more of the newly created allotments were sold off by individual Native landowners or seized by the state for the payment of taxes.

In July, the U.S. Supreme Court settled the longstanding question when it handed down a ruling in McGirt v. Oklahoma, a case that concerned Jimcy McGirt, a Seminole man whom the state convicted of a sex crime in 1996. His lawyers argued that the state never had jurisdiction to prosecute the crime since it was committed on land promised to the Muscogee in the 1830s. In the U.S., crimes involving Indigenous people that are committed on Indian reservations are instead subject to federal and tribal jurisdiction. The Supreme Court agreed 5-4, a ruling that was hailed as a victory by the Muscogee (Creek) Nation and other tribes as recognition of the land’s reservation status.

The ruling’s reverberations were most immediately felt in federal and tribal courts, where local prosecutors immediately began referring criminal cases related to people of Native American descent. Though the ruling does not apply to non-Native Oklahomans suspected of committing crimes in the former Indian Territory or affect property ownership, it’s unclear if it has wider implications beyond criminal law for government functions such as taxing or zoning.

For many, the ruling represents a move toward long-sought Native American sovereignty in Oklahoma. “Many folks are in tears,” Jonodev Chaudhuri, the Muscogee (Creek) Nation’s ambassador, told Indian Country Today after the ruling. “Despite a history of many broken promises, as is true with many tribal nations, the citizens feel uplifted that for once the United States is being held to its promises.”