The Falkland Islands Preserve Wildlife and Habitat After War

The isolated Falklands, best known for sheep and a brief war, offer a living lesson in what happens when nature is allowed to flourish.

This story appears in the February 2018 issue of National Geographic magazine.

On the rocky shores of Steeple Jason, a distant island in the Falklands archipelago, I am awed by the magnificence before me. More than 440,000 black-browed albatrosses, the world’s largest colony, nest on steep cliffs. Along the beach below, southern rockhopper penguins call loudly. The always relentless striated caracaras—known as Johnny rooks—scout for penguin chicks or carrion to eat.

The imagery is fitting. I am, after all, in the Falklands. War is a common theme. About 250 miles off the coast of Argentina, the British territory consists of more than 700 islands and islets, sparsely settled by about 3,200 people. Best known for the long history of disputes over the land, involving France, Spain, Argentina, and the United Kingdom, the archipelago wears the scars of war openly. The last conflict, when Argentina invaded the islands it claims as the Malvinas in 1982, ended after a brief but intense engagement with the United Kingdom. Roughly 20,000 land mines have not been accounted for, burned-out helicopters mar the landscape, and the Royal Air Force still has an active airfield on East Falkland.

About 3,200 people call the long-contested

Falkland Islands home, leaving much of the

British territory to wildlife. The habitat is so

to their environment can affect their

The archipelago is a haven for more than a hundred

bird species, many of them seabirds. Thirty-six

percent of the global numbers of southern

*LOCATION DATA ARE FROM 2015. BREEDING-PAIR

ESTIMATES ARE BASED ON THE LATEST ISLANDWIDE 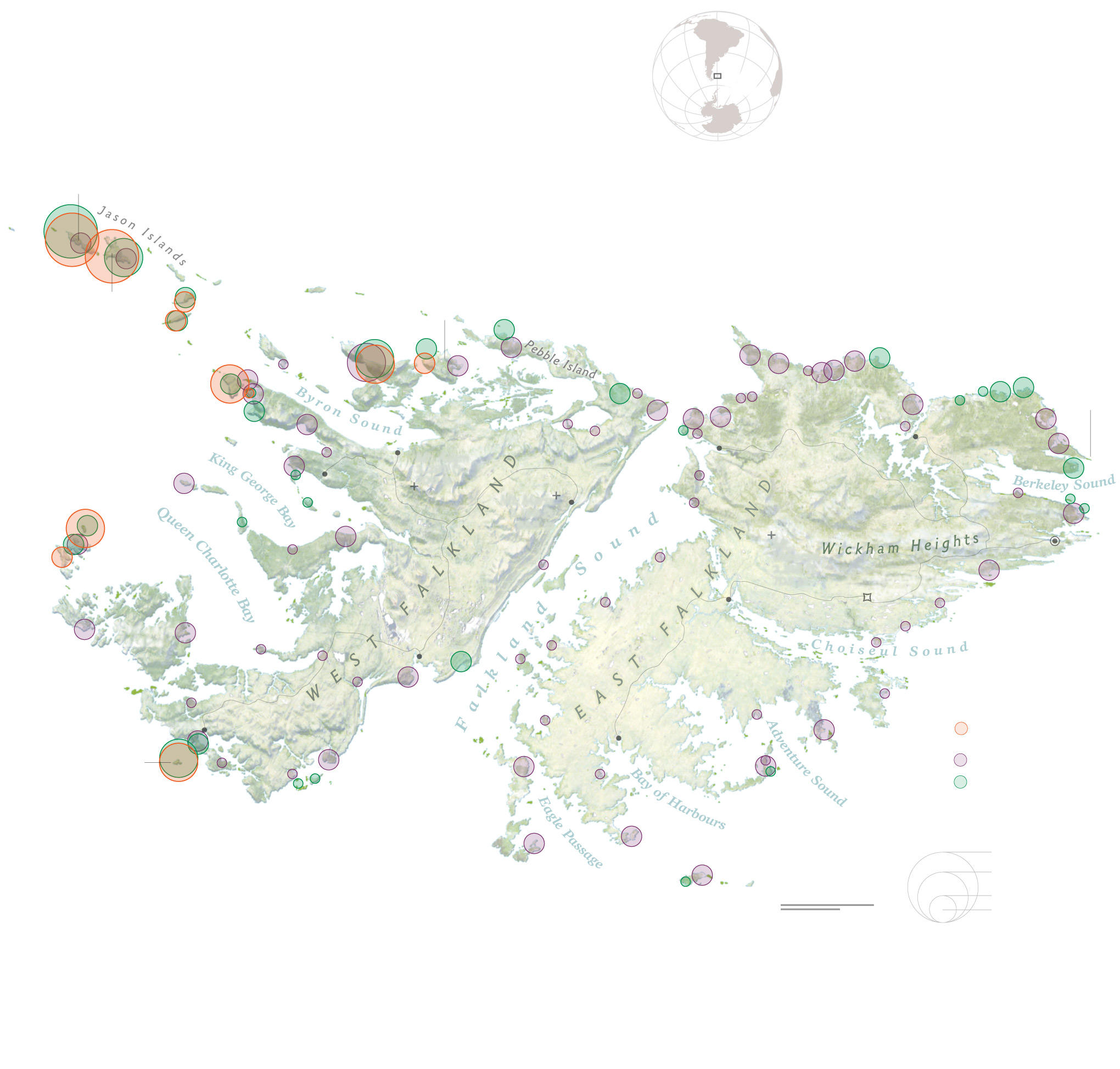 leaving much of the British territory to wildlife. The habitat is so vital to

certain seabird species that harm to their environment can affect their

Threats to biodiversity include

overgrazing and the introduction

of non-native species, such as

predators that can alter

The archipelago is a haven for more than a hundred

bird species, many of them seabirds. Thirty-six

percent of the global numbers of southern

*LOCATION DATA ARE FROM 2015. BREEDING-PAIR ESTIMATES ARE BASED ON THE LATEST ISLANDWIDE CENSUS, FROM 2010.

But for all the conflict—and despite extensive sheep farming—the islands appear surprisingly utopian. From the nutrient-rich ocean waters to the rain-sprinkled mountains, I’ve rarely encountered such an intact ecosystem in almost three decades as a photographer.

Steeple Jason and neighboring Grand Jason, two islands untouched by war, might be the greatest Falklands success stories. Sheep and cattle grazed relentlessly on the otherwise uninhabited islands for nearly a century before a British bird lover acquired them in 1970. He turned the islands into a private sanctuary, and the vegetation began to recover. In the 1990s, New York hedge fund pioneer Michael Steinhardt bought the islands, and in 2001 he and his wife, Judy, donated them to the Wildlife Conservation Society, which owns and manages them. Researchers and tourists have been allowed only on carefully controlled visits. 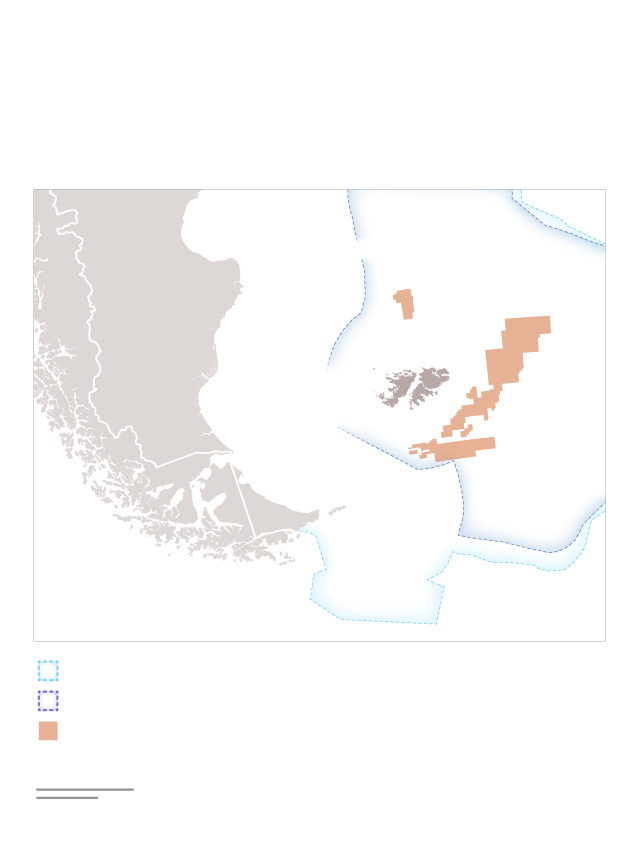 Britain and Argentina warred over the islands

in 1982, and both claim them. Tensions remain

as interest in oil and gas exploitation grows.

Fast-forward to today, and the resiliency of nature is in evidence everywhere around me. The diversity on display is as if the Pacific Northwest, the West Indies, and Antarctica had collided in the South Atlantic. On five-mile-long Steeple Jason, 48 bird species have been observed. But the extraordinary profusion of Falklands wildlife still faces man-made risks: pollution, degraded habitat, oil slicks, baited hooks dragged behind fishing vessels, and, notably, climate change. The ocean may cool around the islands and warm farther away, disrupting the food web that nourishes seabirds and marine mammals. Increased oil exploration near the islands has also raised concerns about a devastating spill. The Falkland Islanders, though, have a growing incentive to embrace conservation. With more than 60,000 tourists visiting a year, ecotourism is now the second largest source of revenue, behind fishing and ahead of sheep farming.

As a trained biologist, I can’t help but be obsessed with the difference between the islands left alone and the islands touched by our heavy hand. What can we learn from Steeple Jason’s abundance? There is hope, and there is healing, if we choose to let nature be. Exploring the island’s sloping grasslands and looming mountains is like walking back a thousand years in time. The ecosystem pristine. The wildlife extravagant. The animals unafraid of us.

Mischievous Johnny rooks try to steal items out of my camera bag. Albatrosses hover overhead, suspended on the constant updrafts that blow off the Atlantic. One taps the back of my head lightly with its feet as it passes above me. I imagine it does so on purpose; these are precise birds. Where else can animals feel so free to engage in play with the likes of us? More important, how can we help them remain so unafraid? If we keep treating our fragile Earth simply as a place for resources to be extracted, it will continue to suffer. I see Steeple Jason as a testament to Earth’s resiliency but also a call for urgency. We need more Steeple Jasons, more places where we stop waging war on the environment and give nature the time it needs to flourish.

Paul Nicklen, a photographer, filmmaker, and marine biologist who was raised in the Canadian Arctic, has documented wildlife around the world for National Geographic.