This refuge may be the most contested land in the U.S.

The Trump Administration has finalized plans to sell oil leases in the Arctic National Wildlife Refuge. Here’s what’s at stake.

Read Caption
In spring, caribou migrate to the Arctic National Wildlife Refuge’s coastal plain. There they spend six weeks grazing on tundra, giving birth, and dodging mosquitoes and predators—including Alaska-native hunters, for whom caribou are a crucial resource. The coastal plain is also where the oil may lie.

The Trump Administration has finalized plans to sell oil leases in the Arctic National Wildlife Refuge. Here’s what’s at stake.

Update: On Monday, November 16, 2020, the U.S. Department of the Interior called for companies to begin reserving tracts to bid on during an upcoming sale of oil leases in the Alaska National Wildlife Refuge. In August, Interior said it would begin selling the leases possibly before the end of 2020. But environmental groups promised to continue challenging the effort in court, and drilling in the refuge is unlikely to begin for years. With oil prices still low following their historic plunge earlier this year, it's also uncertain how much industry interest there will be in new leases.

This story appears in the June 2018 issue of National Geographic magazine.

The bush plane lurched off the gravel airstrip, banked slowly over the village of Kaktovik, and was soon a yellow dot soaring over a brown sea of tundra—and perhaps the most contested real estate in the United States.

The coastal plain of the Arctic National Wildlife Refuge (ANWR) has been for millennia the summer home of hordes of caribou and migratory birds, the winter home of polar bears, and a hunting ground for Alaska natives. It also may hide some 7.7 billion barrels of oil, and therein lies the problem.

When Congress created the 19.3-million-acre refuge in 1980, the nation was facing its second oil crisis in less than a decade. So lawmakers postponed deciding the fate of a potentially oil-rich area, covering 1.5 million acres, of the coastal plain. They’ve been fighting over it ever since.

“When I first came up here in the early ’70s, it was untrammeled country,” said pilot Pat Valkenburg, a retired biologist for the Alaska Department of Fish and Game. “Now every time ANWR gets into the press, another slew of people come.”

That flight I took with Valkenburg was in 2005, but the refuge has been in the press a lot lately. After nearly 40 years and more than a dozen failed attempts by Republicans to open the area to oil exploration, Alaska Senator Lisa Murkowski slipped a drilling provision into the tax bill her party passed last year.

Drilling won’t happen for many years, experts say. But the current U.S. administration is eager to proceed with the two lease sales, of at least 400,000 acres each, ordered by the new law. Assuming various regulatory and legal hurdles can be cleared, Alaska and the U.S. government will split the proceeds, which the Congressional Budget Office puts at $2.2 billion. Recent lease prices suggest that’s wildly optimistic.

Alaska, a state with neither a sales tax nor an income tax, needs every dime. The oil and gas industry funds 90 percent of the state budget—plus an annual dividend of over $1,000 to each Alaskan—mostly through a tax on North Slope oil flowing through the Trans-Alaska Pipeline System (TAPS). Since oil prices plummeted in 2014, the state has suffered multibillion-dollar budget deficits. More ominously, in spite of a recent uptick, the amount of oil oozing through the pipeline has fallen steadily since 1988. A 2012 report from the U.S. Energy Information Administration estimated that if oil prices stayed low, the pipeline would shut down by 2026.

“If they shut TAPS, Alaska dries up and blows away,” says one petroleum geologist who spent his career there. More than one-third of the state’s 300,000 private-sector jobs depend on oil and gas.

Rich in biological diversity and potential

has been contested since it was estab-

lished in 1980. Opening its coastal plain

to oil drilling, conservationists say, could

threaten crucial habitat for caribou and

vulnerable species such as polar bears,

which already are struggling with the

ferred a decision on oil

acres of the coastal

plain. Only one well has

ing in ANWR, to birth cubs.

OF FISH AND GAME; ALASKA OIL AND GAS 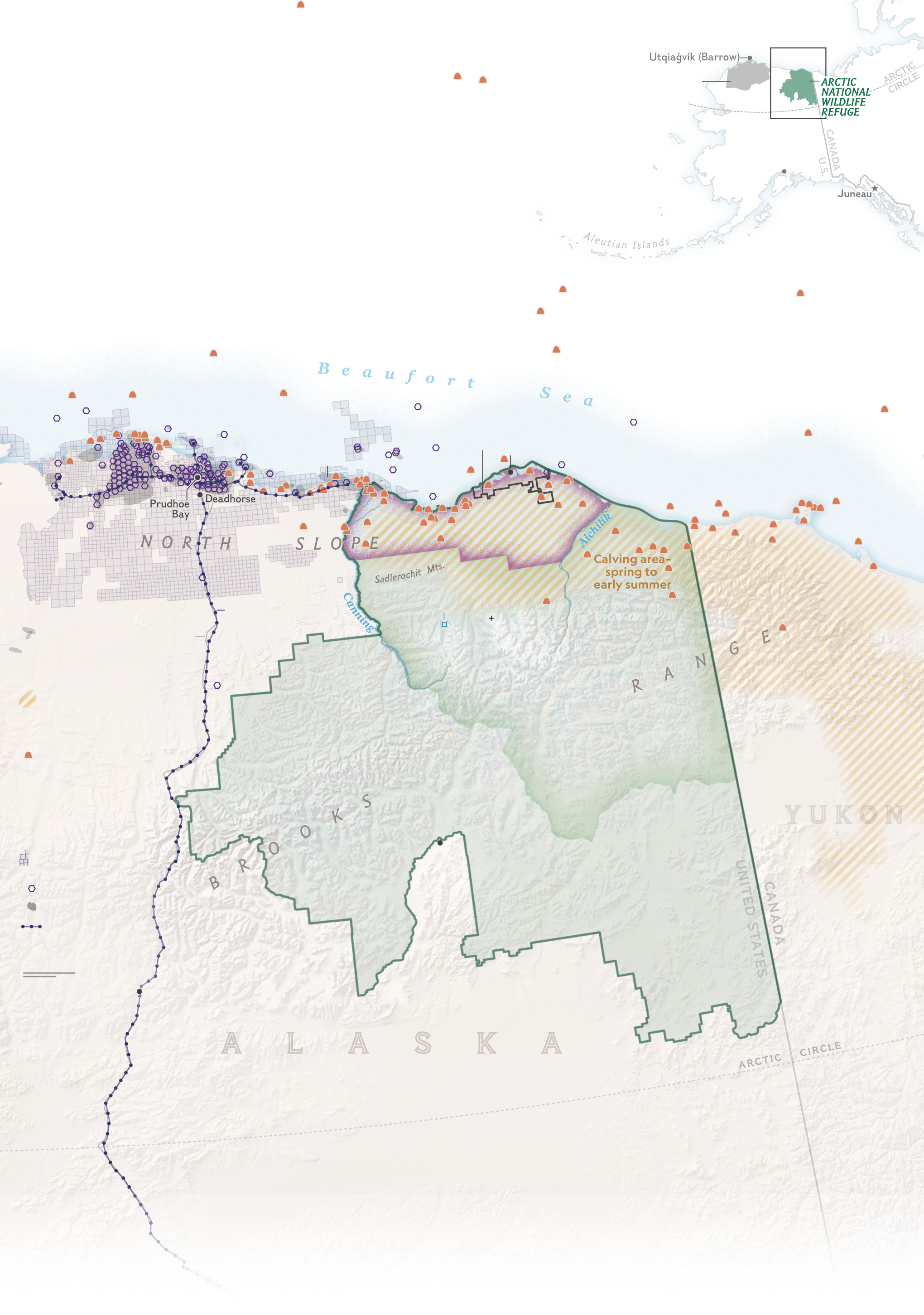 Wildlife Refuge (ANWR) has been contested since

it was established in 1980. Opening its coastal plain

such as polar bears, which already are struggling

with the effects of climate change.

in 1.5 million acres of the

coastal plain. Only one

well has been drilled.

on land, including in ANWR,

This herd migrates to ANWR’s

coastal plain to find food during

Scattered in the refuge are small tracts

of native lands of up to 160 acres, originally

granted by the 1906 Alaska Native

West of ANWR, the National Petroleum Reserve-Alaska and adjacent state lands are already open for exploration. New discoveries have given those areas an estimated 8.7 billion barrels of recoverable oil—a billion barrels more than the Arctic refuge. That estimate comes from a December report by the U.S. Geological Survey (USGS), which was ordered to delay releasing the report until after a crucial vote on the tax bill.

Alaska politicians may be desperate for oil, but for the nation as a whole, now awash in shale oil and gas from the lower 48 states, the cost-benefit calculation of drilling in America’s wild frontier is different. “That’s the million-dollar question,” says Mouhcine Guettabi, an economist at the University of Alaska in Anchorage. “Whose welfare are we maximizing? Are we taking into account the value every U.S. citizen places on wilderness? Or are we just maximizing the benefits to Alaskans?”

Photographer Florian Schulz grew up in southern Germany dreaming of wilderness such as this. “There is nothing in Europe even remotely similar,” he says. “This is one of the last truly wild landscapes. It’s like looking back in time to when mastodons roamed the land.”

He has spent much of the past four years exploring the refuge. From the taiga forest in the south, over the crags and alpine meadows of the Brooks Range, to the rolling tundra that flattens out to the Beaufort Sea, ANWR is more than 30,000 square miles of intact ecosystem; only a few scattered cabins reveal the hand of humanity. The contrast across the refuge boundary at the Canning River is stark: On the other side stands ExxonMobil’s new Point Thomson gas field, with nearly 300 acres of gravel pads, blue steel buildings and white steel tanks, docks and an airstrip, and 11 miles of gravel roads. A single pipeline threads off to the west, toward the distant brown haze that perpetually hangs over Prudhoe Bay, the industrial center of the North Slope.

In 2005, after Valkenburg and I banked back over the Canning and into the refuge, he pointed out clutches of buff-brown caribou that soon became scattered herds. We followed the foothills of the Sadlerochit Mountains toward the snow-capped massif of Mount Michelson.

Suddenly, just beyond a narrow green valley known as Sunset Pass, there they were: tens of thousands of caribou, milling about, waiting their turn to enter the bottleneck. We made a slow turn over the forest of antlers. The Arctic sun bathed the herd and the valley in gold. It was a scene that’s been going on for millennia, one Schulz knows well—and one that is seared in my memory too.

Today the Porcupine caribou herd is thriving, a record 218,000 animals strong; more than half the females give birth in the refuge. Polar bears are not thriving. The southern Beaufort Sea population fell 40 percent in the first decade of this century. The bears are less healthy, they’re having fewer cubs, and more cubs are dying. As sea ice thins in the warming Arctic, more bears will need to den on land in winter. ANWR’s coastal plain has the best denning habitat in Alaska.

No one knows exactly how much oil lies beneath that plain or how oil exploration might affect its wildlife, although some disturbance would be inevitable. Before the U.S. Department of the Interior (DOI) sells leases, it will have to conduct an environmental impact study in which experts and the public will weigh in.

Both sides of the debate are gearing up for a protracted legal and political fight.

“We don’t want DOI to rush to have a lease sale,” says Kara Moriarty, president of the Alaska Oil and Gas Association. “We know the environmental community will challenge the draft, challenge the sales, challenge the result. We want the department to cross every T three times.” Her second grader, she says, will be getting his engineering degree before any oil flows from ANWR: “It’s truly for that next generation.”

Steven Amstrup, a polar bear scientist at the USGS for 30 years and now with Polar Bears International, says oil companies can limit their impact on polar bears by, for example, limiting exploration until April, when the bears leave their winter dens and head out to sea. But such measures ignore the big picture, Amstrup says. “We already know how to save the polar bears,” he says. “We need to stop burning oil. If we don’t do that, all the regulations we put on the ground won’t matter. If we don’t stop global warming, none of this matters.”

The debate truly is about future generations: What will they value most in northern Alaska? A few more barrels of a fraught fuel? Or their very own real-life Jurassic Park? “One thing’s for sure,” Amstrup says. “Wherever they drill, it’s not going to be wilderness anymore.” How that affects the rest of the ecosystem—and the nation—is the two-billion-dollar question.