Year of the Bird

Have Parrots Become Too Popular for Their Own Good?

They sing, dance, and steal our hearts. They’re so beloved as pets that international traffickers are now stealing them from the wild.

They sing, dance, and steal our hearts. They’re so beloved as pets that international traffickers are now stealing them from the wild.

This story appears in the June 2018 issue of National Geographic magazine.

Sometimes the sounds of a vocalist warming up drift through the lush aviaries of Umgeni River Bird Park. The prima donna in question? A parrot named Molly. The blue-fronted amazon learned to sing scales from a former owner. Many of the parrots at this zoo and breeding center in Durban, South Africa, are rescues, given up by people unprepared for the challenges of owning a large, needy bird. Not only are parrots loud and destructive; some are as smart as a three-year-old child, and some can live 80 years.

Even so, the draw to keep parrots—what conservation ecologist Stuart Marsden calls the “humans of the bird world”—can be irresistible. Highly social and intelligent, the birds create meaningful, powerful bonds with their owners. Combine that with their ability to mimic human voices, and it’s no coincidence that parrots are arguably the most popular pet birds on Earth.

In some cases, however, their popularity is hurting them. Despite robust breeding programs worldwide, many parrots are still plucked illegally from the wild. One reason: Organized-crime rackets that have made billions of dollars trafficking animals such as elephants and rhinos have added parrots to their repertoire. Australian palm cockatoos have been known to fetch up to $30,000 a bird on the black market. The illegal parrot trade is rampant in Latin America and the Caribbean, where laws against it can be lax or difficult to enforce.

“In the United States, if you go buy a parrot, the odds of it being captive bred are 99 percent,” says Donald Brightsmith, a zoologist at Texas A&M University who studies macaws in Peru. But “if you’re in Peru, Costa Rica, or Mexico, the chances of it being wild caught are 99 percent.”

The demand for pets, coupled with deforestation and habitat loss, is the primary driver of parrots’ imperiled status. All but four of the roughly 350 species qualify for protection under the Convention on International Trade in Endangered Species, or CITES.

By far the most coveted species is the African gray, the best talker of them all. Over the past four decades, at least 1.3 million grays have been exported legally from the 18 countries where they live, according to CITES. Hundreds of thousands more have likely died in transit or been snatched from the rain forests of West and Central Africa.

The hub of the trade is South Africa, which exports more African grays than any other country. Historically most orders came from the United States and Europe, but fear of bird flu and laws restricting the bird trade dried up those markets. The Middle East now fills the void. South Africa exported thousands of grays to the region in 2016.

That year, CITES made the controversial decision to add the gray parrot to Appendix I, a designation covering species threatened with extinction. To continue selling birds abroad, breeders must now prove to CITES inspectors that their African grays are raised in captivity, not caught in the wild. Most captive-born chicks have a permanent ID ring placed on their legs. Illegal traders may have figured out how to attach the rings to wild birds, so it’s not always easy to tell the difference between captive-bred and wild-caught birds. But there might be a way. 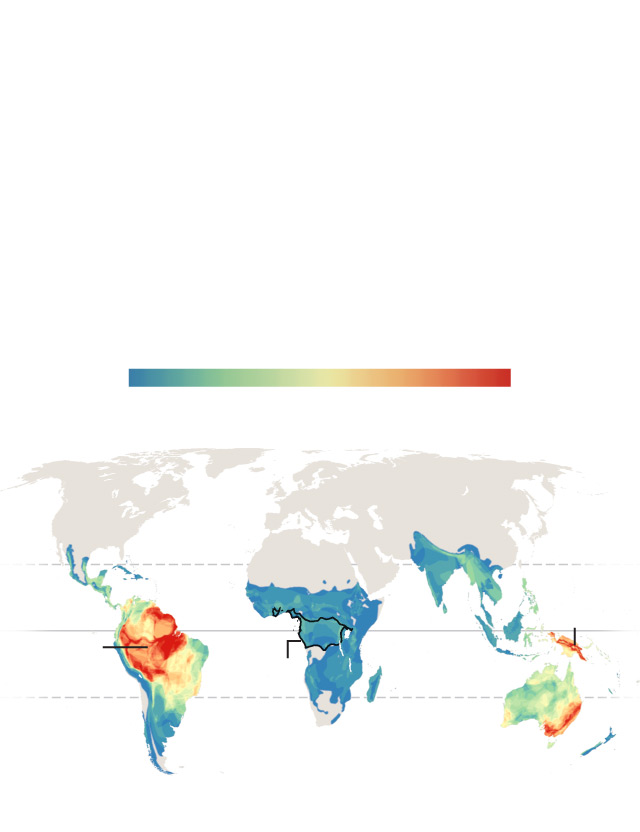 With more than 350 species, the parrot fam-

cockatiels, and cockatoos—ranges over five

continents. The Amazon, New Guinea, and

Australia have the greatest variety.

With more than 350 species, the parrot family—which also includes parakeets, macaws, cockatiels, and cockatoos—ranges over five continents. The Amazon, New Guinea, and Australia have the greatest variety. 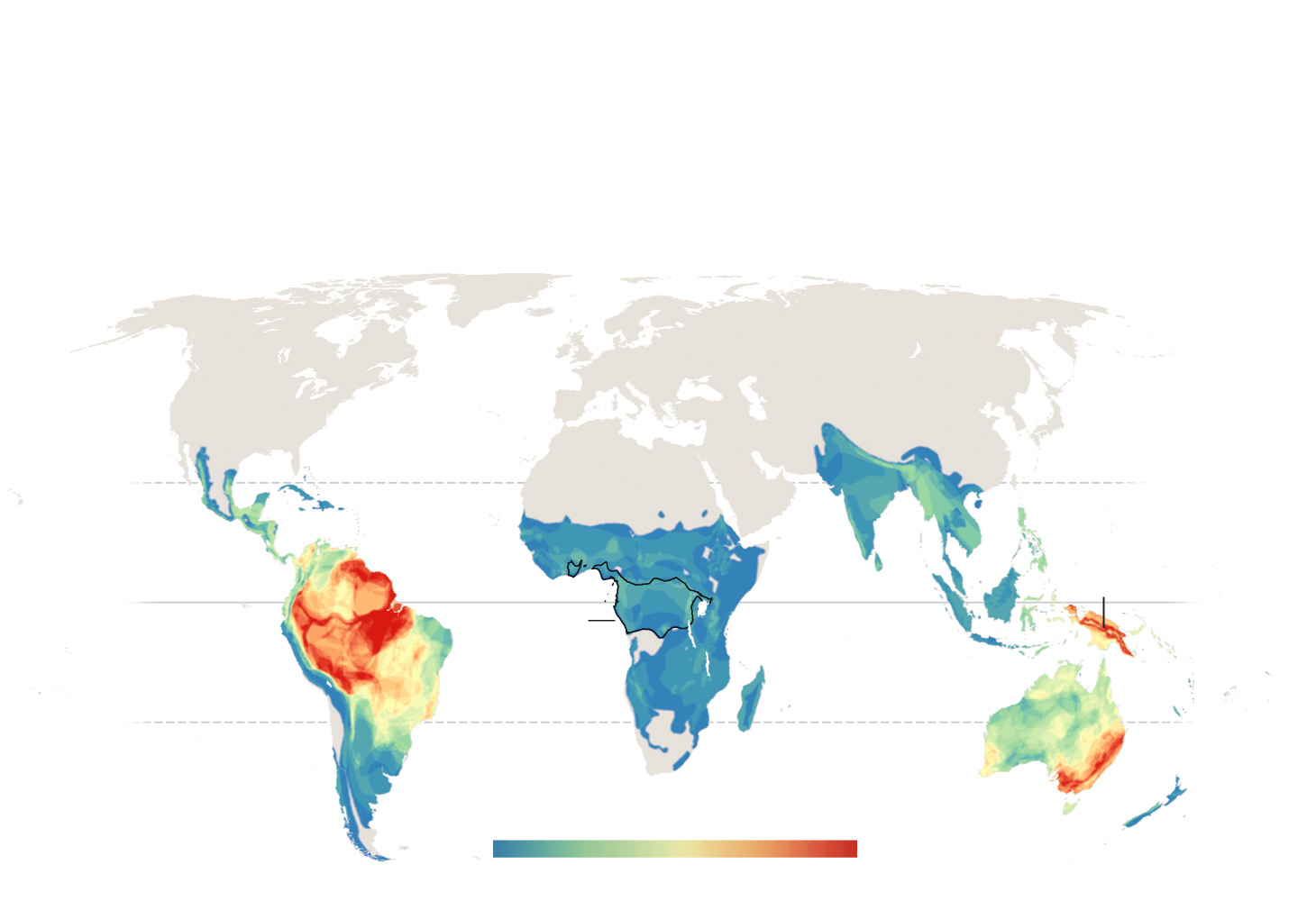 With more than 350 species, the parrot family—which also includes parakeets, macaws, cockatiels, and cockatoos—ranges over five continents. The Amazon, New Guinea, and Australia have the greatest variety.

Geneticists at South Africa’s University of KwaZulu-Natal hope to develop a gene-based method for determining whether a bird is wild caught or captive bred by sussing out distinct genetic profiles. Such DNA work could lead to a test that allows a breeder, pet buyer, or airport inspector to take a sample from a bird and discover its origins on the spot. A similar approach could use chemical isotopes in parrot feathers to reveal their diets, which point to their place of origin.

There have been some encouraging developments for parrots in recent years: Saudi Arabia and the United Arab Emirates—countries that initially refused to implement the CITES restrictions—have since stated publicly that they will no longer import wild-caught grays.

Then there are the conservation success stories. The critically endangered Puerto Rican parrot, for example, was down to 13 individuals in the 1970s, owing mainly to the loss of old trees with nest cavities. Then biologists launched a captive-breeding program and began installing nest boxes made of PVC pipe. Wild and captive birds now number in the hundreds—though two devastating hurricanes in 2017 dealt them a temporary setback.

The long-term challenge, conservationists say, is convincing the public that parrots are more than amusing sidekicks on pirates’ shoulders, or pets singing songs and mimicking vulgarities from a cage. They’re hundreds of species that live wild and free on nearly every continent, an entire cast of noisy and colorful birds that, before long, could keep flying under the radar and into extinction.

Christine Dell’Amore is natural history editor for National Geographic. Photographer Joel Sartore has been described as a modern-day Noah for building the Photo Ark, an ongoing project to document every species in captivity. He takes studio-style portraits in zoos and wildlife sanctuaries to "get people to care" about species at risk and conservation. Join our #SaveTogether campaign, and learn more about the new Birds of the Photo Ark book.