The World Has Left Yemen to Die

Exclusive photos give a rare look inside the country, where civil war has trapped civilians in a life of violence and disease.

This story appears in the August 2018 issue of National Geographic magazine.

The young woman was carried into the hospital at 9:30 a.m. Twenty minutes earlier she had been hanging laundry when a bomb fell in her courtyard on the outskirts of Taizz, an ancient city in southwest Yemen. A man covered in blood, her cousin, cried as the doctors rushed her to the trauma center.

“Both legs?” he asked when the doctor returned and gestured to show where they would amputate. One leg was shredded; the other had a protruding bone. Both, the doctor confirmed. She was put in an ambulance and taken to another hospital. Then there was silence. The nurses scrubbed blood off the floor and waited for the next patient.

That night, Matteo Bastianelli, an Italian photographer who’d watched the scene, wrote in his diary about life in Taizz after three years under siege: “Doctors wait, with the thunder of airplanes in their ears and the dust in their eyes, living with the fear that something terrible and irreparable could happen at any moment."

Once known by the Romans as Arabia Felix, “Fortunate Arabia,” Yemen was a strategic port at the entrance to the Red Sea, made rich by spices and scents. Today it’s one of the poorest countries in the world. Until 1990 north and south Yemen were governed separately, and this divide continues to fuel conflict. In late 2014 separatist Houthi rebels seized the capital of Sanaa in an attempted coup. Fearing a regional shake-up, neighboring Saudi Arabia intervened on behalf of President Abdrabbuh Mansour Hadi’s former government. With support from the U.S., the U.K., and nearly a dozen Arab states, a Saudi-led coalition launched an air campaign to help Yemen’s government keep its grasp on large swaths of the country.

Since April 2017, more than a million suspected cholera cases have been reported in Yemen.

An international blockade and reliance on imported medical supplies have made it difficult to contain and treat the outbreak.

North and south Yemen were governed separately until the country unified in 1990. Tensions between political factions erupted in 2014, creating what the UN deems the world’s worst humanitarian disaster.

Area under control or influence

Al Qaeda in the Arabian Peninsula and tribal allies 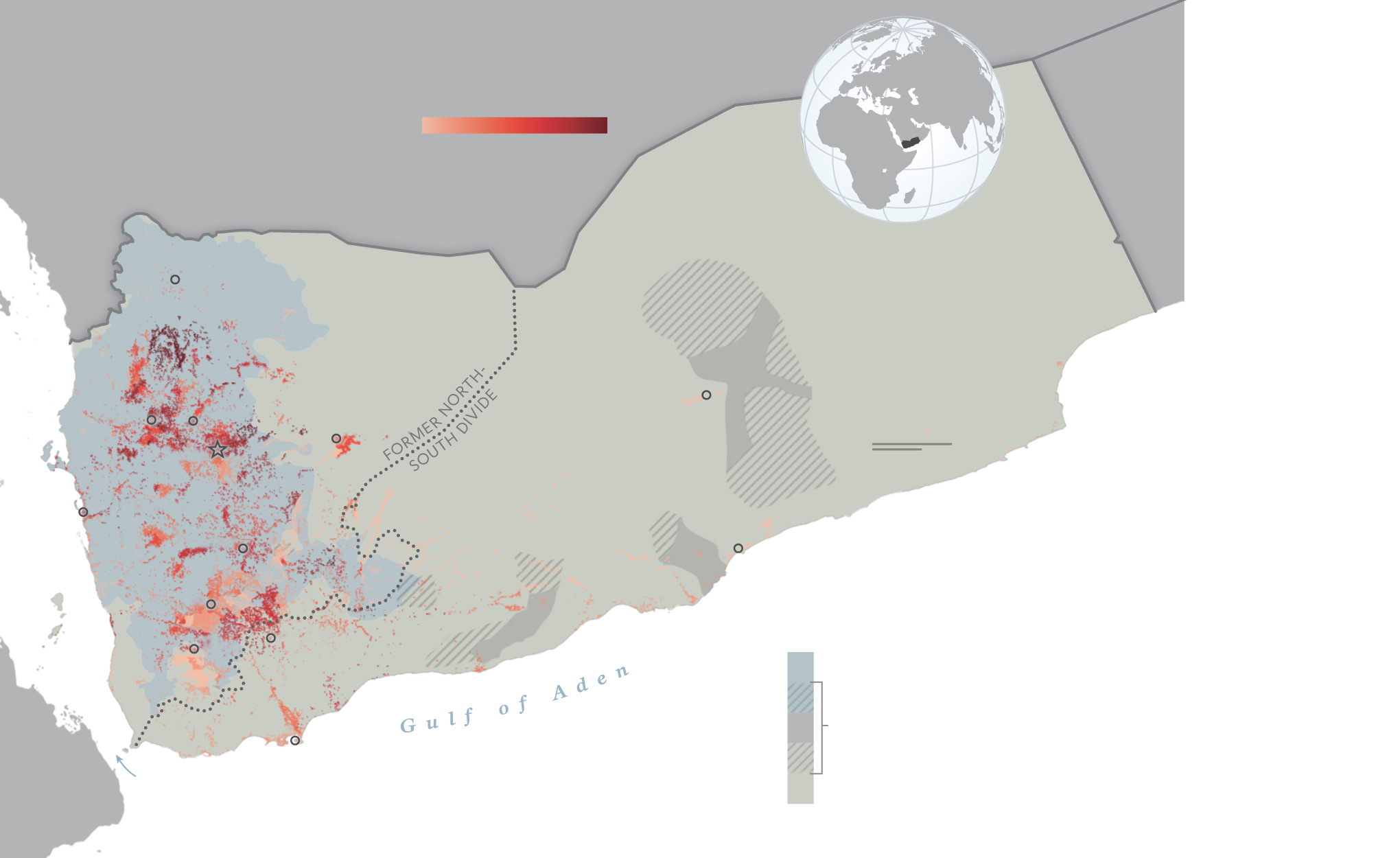 Since April 2017, more than a million

suspected cholera cases have been

reported in Yemen. An international

blockade and reliance on imported

medical supplies have made it difficult

to contain and treat the outbreak.

North and south Yemen were governed separately until the country unified in 1990. Tensions between political factions erupted in 2014, creating what the UN deems the world’s worst humanitarian disaster.

Area under control or influence

Al Qaeda in the Arabian Peninsula and tribal allies

After three years of fighting, the numbers are stunning: In a nation of nearly 29 million, 22 million Yemenis are in need of humanitarian assistance, according to the UN. Two million have been displaced. At least 10,000 are dead. With the economy and health care system in shambles, Yemenis make desperate decisions to find medical treatment. Some take dangerous cross-country journeys to hospitals run by humanitarian groups; others spend their savings at private clinics. More than half of Yemen’s hospitals are closed or partly functioning, and sometimes administrators must choose between buying medical supplies and fuel for generators. Infectious diseases such as cholera and diphtheria are rampant, reflecting the lack of treated water and other basic government services.

Before 2015 the recently built, five-story white stone building on the outskirts of Taizz was slated to be a hotel. Less than two miles behind a battlefront, it’s now a maternity hospital and trauma center run by Doctors Without Borders. Behind the concrete barrier, malnourished babies are fed, cholera patients recover, and war victims are bandaged: young boys hit with shrapnel while playing in their yards, the hospital’s own night watchman, hit by a shell while shopping.

Doctors and other health workers at public hospitals haven’t been paid since 2016. Humanitarian groups are supporting the health ministry with salaries and supplies. But a Saudi-led coalition blockade on the country’s airports and ports in an attempt to stop supplies from reaching the rebels has arbitrarily delayed or diverted aid shipments, says Kristine Beckerle, with Human Rights Watch, adding that both sides “are weaponizing aid.”

Since 2017 the country has seen more than a million suspected cholera cases—the worst outbreak in modern history. One NGO ordered a shipment of medication in July 2017. It didn’t arrive until April.

Many of Yemen’s doctors have moved to private hospitals or fled the country, leaving a shortage of medical professionals. Those who stay behind train their neighbors to treat wounds in case of an emergency overnight, when it’s too dangerous to travel.The private clinics cost more than even a middle-class civilian can afford. If you are dying, one elderly man told Bastianelli, you have to pay to be pronounced dead. The other option is to drive across the front lines to one of the country’s two open airports. Few can afford the cost of fuel—or the risk. “They’re locked in Yemen. No country is giving them asylum or making a humanitarian corridor,” says Bastianelli. “They count the days and wait to die.”