This new Olympic sport went from fringe hobby to a worldwide influence on cityscapes and fashion.

A crowd gathers at Venice Beach Skate Park to watch the feats of skateboarders such as Sean Davis (airborne, right). The 22-year-old moved from Illinois to California last year to pursue dreams of being a pro skater in the sport’s epicenter.

This new Olympic sport went from fringe hobby to a worldwide influence on cityscapes and fashion.

This story appears in the June 2020 issue of National Geographic magazine.

On a sunny Monday afternoon at Venice Beach, a tall young man in a T-shirt and baggy pants leaps over the rail of the skate park, drops his skateboard onto the concrete surface, mounts the wood with his left foot, and proceeds to glide along the park’s perimeter with increasing speed. He descends into one of the park’s two deep bowls, then soars back up and over its far lip. Approaching a platform, he and his skateboard leap onto it—but not before his back foot twirls the board 360 degrees, a move he executes again as he flies off the platform’s other end and lands on the pavement.

His name is Sean Davis, and since the age of eight, he has thought of himself as a skateboarder above all else. From Naperville, Illinois, he moved to Los Angeles last year, couch surfing and at times sleeping in his car—all to be here in Southern California, the sport’s birthplace.

From a neighborhood hobby to a sport that gained traction in California’s surfing scene in the 1950s, skateboarding is now mainstream and global. Its scruffy DIY ethos has swept Shanghai, São Paulo, Helsinki, and even Kabul. Skateboarding has its own language for moves (fakie, vert, kickflip, ollie), founding fathers (including Tony Alva, Steve Caballero, and Tony Hawk), journal of record (the San Francisco-based Thrasher), definitive film (the 2001 documentary Dogtown and Z-Boys, directed by skateboarding legend Stacy Peralta and narrated by Sean Penn), and celebrity hobbyists (Justin Bieber, Rihanna, Lil Wayne, Miley Cyrus).

Once regarded—in the words of Ocean Howell, formerly a pro skateboarder and now an associate professor of history—as “a thorn in the side of landscape architects, planners, and building owners,” skateboarders today have become unofficial advocates for urban planning and design.

“Governments are now supporting it as a sport, just as they are soccer,” says Yulin Olliver, a Los Angeles–based sports agent with Wasserman, which represents several skateboarders.

As the ultimate validation, and in tacit acknowledgment of their need to appeal to a younger audience, the next Olympics plan to include new events: men’s and women’s street and park skateboarding. The former will take place on a course of stairs, handrails, curbs, and other urban-style features; the latter in a meandering terrain of hollowed-out dips and bowls.

For all the sport’s ubiquity, skateboarding’s ground zero remains its origin point: Southern California. The state’s history, from gold miners to tech entrepreneurs, is a repeatedly told tale of reinvention and smashing norms.

The daily spectacle played out at Venice Beach Skate Park is deceptively whimsical, seemingly of a piece with the pickup basketball games and tennis matches a couple hundred yards away. But the skateboarders have more in common with the previous era’s bodybuilders such as Reg Lewis and Dave Draper, who epitomized not only the California lifestyle but also its coolly determined ambition. Just as those musclebound beach boys sought to reconfigure the human physique, skateboarders flock to Southern California to carve and pare the lanes of human traffic.

“This is exactly as it’s depicted,” says pro skateboarder Sebastian “Sebo” Walker, 32, who relocated from Salem, Oregon, more than a decade ago and spent four years sleeping in the back of a van so he could spend his days honing his craft in SoCal skate parks. “Sunny every day, great skateboarders everywhere, a world-famous lifestyle that’s very much real.”

That pervasively casual lifestyle has been augmented with an upmarket sheen as Venice Beach has become a well-traveled destination. Visitors compete with locals for table space at popular restaurants such as Charcoal Venice, the Tasting Kitchen, and the sleek coffee bar Intelligentsia. But no touristic experience at Venice Beach would be complete without checking out its skateboarding scene. 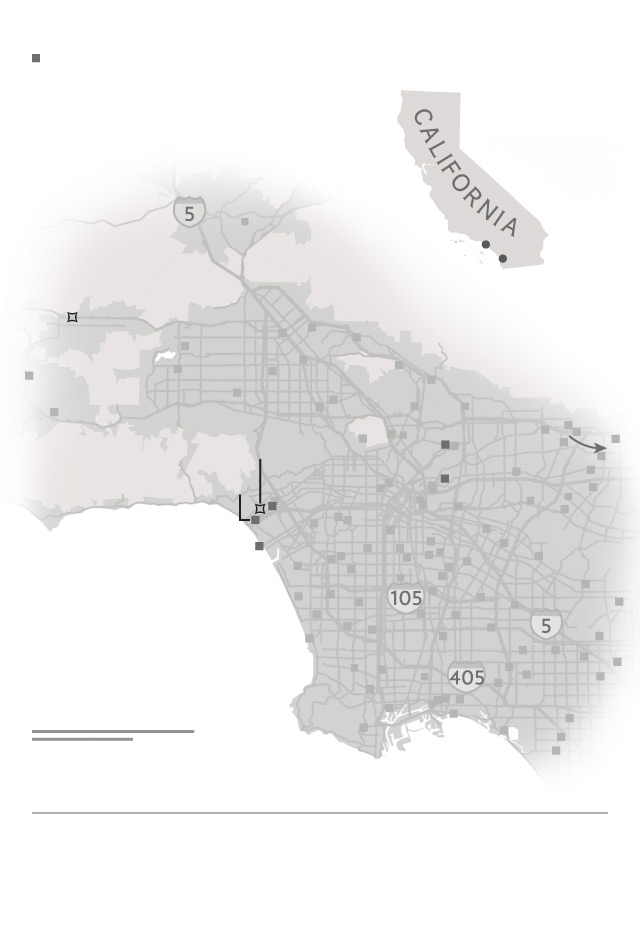 Still, Venice’s skate park is barely a decade old. Santa Monica’s park, The Cove, was built in 2005, while West L.A.’s skateboarder haven in Stoner Skate Park opened in 2010. Each has a neighborhood constituency. “It’s a brotherhood of sorts and very much territorial,” says Jim McDowell, a co-owner of Santa Monica’s tiny but evocative skateboarding shop Rip City Skates, founded in 1978 in a former bar. “The Venice Beach guys said ‘screw you’ to the Santa Monica guys, and vice versa.”

The skate parks of Southern California—now influencing public spaces all over the world—are themselves copies of denuded urban thoroughfares. They emulate the outlaw tradition of skateboarding as a reimagination of staid, orderly cityscapes. Staircases, park benches, guardrails—they’re all there to be skated on. “Skateboarding is about bending the rules,” says Steve Alba, a legend in the sport for over four decades. “It’s an us-against-them mentality.”

Salba (as he’s known), now 57, was among the second wave of pioneering skateboarders after the Z-Boys, so named for the Zephyr surfboard shop in Santa Monica that they frequented. He helped popularize vertical, or “vert,” skateboarding during the 1970s, when a severe drought in Southern California kept many residents from filling their swimming pools.

The deep bowls in today’s custom-designed skate parks are modeled after the private pools that Salba and his gang used to sneak into, merrily launching their daredevil sky-bound tricks before the police came.

One winter morning outside a residence in San Bernardino County, I watch Salba and some half dozen younger skaters ply their trade in a drained pool that the owner agreed to let them use. Two of them are superstars in the genre: Oskar “Oski” Rozenberg, a 23-year-old Swedish dynamo widely understood to be among the most inventive skaters in the world; and 22-year-old Tristan Rennie, a San Bernardino County native possessed of mentholated calm.

For an hour they take turns whirling and grinding, floppy-haired gladiators on wheels in a backyard Colosseum saluting each other’s tricks with choruses of “Sick, dude!” and “That’s rad, bro!” Salba zooms down into the pool with them. He wears a helmet—always red—as well as matching leopard-skin pads on his elbows and kneecaps, and is noticeably stiffer of gait. Still, the younger skaters look on Salba with reverence. Through various sponsorships, mentorships, video sales, and apparel deals, not to mention his continued activity in pools throughout the so-called Badlands of Los Angeles and San Bernardino Counties, Salba has managed to pull off the most complicated skateboarding trick of all. He has made a career out of this.

“It’s cool to see this new generation hearkening back to the old ways,” the veteran says. “Like Oski. He doesn’t get to do this [skate pools] much in Sweden … But this is what skateboarding’s about—not letting things get in your way.”

Sean Davis knows all about not letting things get in his way. He waits tables at a steakhouse in Santa Monica, to which he skates from the Venice Beach Skate Park some mornings and then back to the park when he clocks out in midafternoon. Once it’s dark, Davis logs on to his computer and posts videos of his latest feats—a good-natured Midwestern dude seeming to fly on a slab of wood directly into the maw of the setting sun—to his more than 12,000 followers on Instagram. At night he dreams of new tricks to execute. He jumps rope in the morning, lifts weights, and does yoga. He visits a local CBD shop to buy a cannabis-derived lotion to treat the pain endemic to a sport that involves flinging one’s unprotected self into a concrete bowl. He has broken an ankle, an elbow, a wrist, a finger, a thumb, a toe, and a relationship with the girl who made the move with him from Illinois to California.

His dedication to the sport is total. Davis has accumulated a handful of sponsors, including Nike, though for the most part the rewards are free gear. He would like to be a professional, to skate for a living, perhaps even start a line of skateboard-oriented clothing. For now, Davis is focused on a singular quest: “to fulfill my childhood dream of seeing my name on a board.”

It is not so wild a fantasy. The renegade nature of the sport has long been on a collision course with its widespread commercial potential—which arguably began with the release of Tony Hawk’s first of several skateboarding video games in 1999.

Olympic status has now conferred on it a legitimacy that from certain angles appears awkward. For a sport that prioritizes individual style above all else, how competitors like Tristan Rennie will fare under the mantle of Olympian uniformity is anyone’s guess. (“I mean, what is the training we’re supposed to be doing?” Rennie asks.)

Two hours by car south of Venice Beach in the oceanside town of Encinitas, I find 16-year-old Bryce Wettstein in her backyard, negotiating the deep curves of her personal skate ramps, named the Iguana Bowl after the family’s deceased pet iguana.

As a teenager, Wettstein cuts a familiar figure: giggly, chronically tongue-tied, a bit clumsy. But she becomes a titan when she mounts a board, either in the Pacific Ocean or on concrete. From age five, she surfed and skated, and by eight did both of them competitively, unable to choose a preference—until about three years ago, when it dawned on her that reacting to nature on a wave did not fully tap into her creative impulses the way riding a skateboard did.

Plus, says Wettstein, “in surfing, you are greatly at the luck or mercy of Mother Nature.” In 2019 she achieved distinction as the U.S. women’s national champion in park-format skating. Wettstein is a female standout in what has been, since its inception, a sport fueled by testosterone swagger. That fact presents opportunities for women, as well as challenges.

“On the men’s side, there’s an ocean of talent, so it’s harder for any one male to rise up and break through the noise,” says Wettstein’s agent, Yulin Olliver. “On the other hand, the sponsorship and contest deals offered to women are so small, you have to piece a lot of them together.”

According to Olliver, there are fewer than a dozen women in the U.S. who can claim skateboarding as a full-time job—and none of them are getting rich off skateboarding sponsorships.

Wettstein, for her part, is still in school. Her immediate concern is not financial viability but the possibility of being disenrolled for missing too many school days while traveling to contests in Brazil, Sweden, Peru, and China.

And she hopes to qualify for the Olympics. If sailing through the air on a wheeled wooden board is a Californian’s ultimate fantasy, then the world of medal platforms and national anthems is a dream on another scale entirely.

The skateboarders of Southern California are architects on wheels, endlessly redefining their sun-bleached urban landscape. To watch them pursue their now Olympian sport on Venice Beach—ledge-grinding and kickflipping down paths all their own—is to witness something as timeless as the Pacific waves: the human impulse to defy the natural laws of the universe. And, of course, to look cool while doing it.

Robert Draper has been a contributing writer for National Geographic since 2007. Dina Litovsky last photographed girls in science fairs for the November 2019 Women’s Issue.