Cutting-edge 3D forensic technology has enabled experts to create a stunningly lifelike portrait of a noble woman who lived and died in South America some 1,600 years ago.

See how science and technology reconstructed the face of the iconic Moche mummy, the Señora de Cao.

Cutting-edge 3D forensic technology has enabled experts to create a stunningly lifelike portrait of a noble woman who lived and died in South America some 1,600 years ago.

See how science and technology reconstructed the face of the iconic Moche mummy, the Señora de Cao.
5 Minute Read
By A. R. Williams

In 2005 archaeologists working at the site of El Brujo on the north coast of Peru uncovered an intriguing bundle of cloth. It had been buried in an ornately painted funerary complex of adobe in about A.D. 400. Inside lay the naturally mummified body of a young female aristocrat from the Moche culture, which flourished in that region a thousand years before the Inca. Experts have now recreated the woman’s features using techniques normally employed to solve crimes.

The mummy is known locally as the Señora of Cao, named after a nearby town, Magdalena de Cao. She’s currently on display in a museum at El Brujo, but she’s hard to see. To help preserve her, she’s kept in a climate-controlled chamber. Visitors can look in through a window, but they don’t view the mummy directly—they only get a glimpse in a deftly angled mirror.

The museum’s curators wanted to give visitors a better look at this remarkable woman. They also needed to make a permanent record of her remains, which will inevitably break down with the passage of time. The solution was to create as faithful a reproduction of her face as technology would allow, as well as an exact replica of the body in its current state. “That kind of record could keep this extraordinary discovery alive for many generations to come,” says archaeologist Arabel Fernández López, who oversaw these efforts.

Assembling an international team of archaeologists, physical anthropologists, forensic scientists and artists, and engineers specializing in 3D technology, the Augusto N. Wiese Foundation launched the project last November. The foundation has supported research at El Brujo since excavations began there in 1990 under the direction of Régulo Franco Jordán.

The Moche flourished for more than seven centuries in Andean river valleys in present-day northern Peru. Almost a thousand years before the Inca, El Brujo was one of many seats of power in the region. 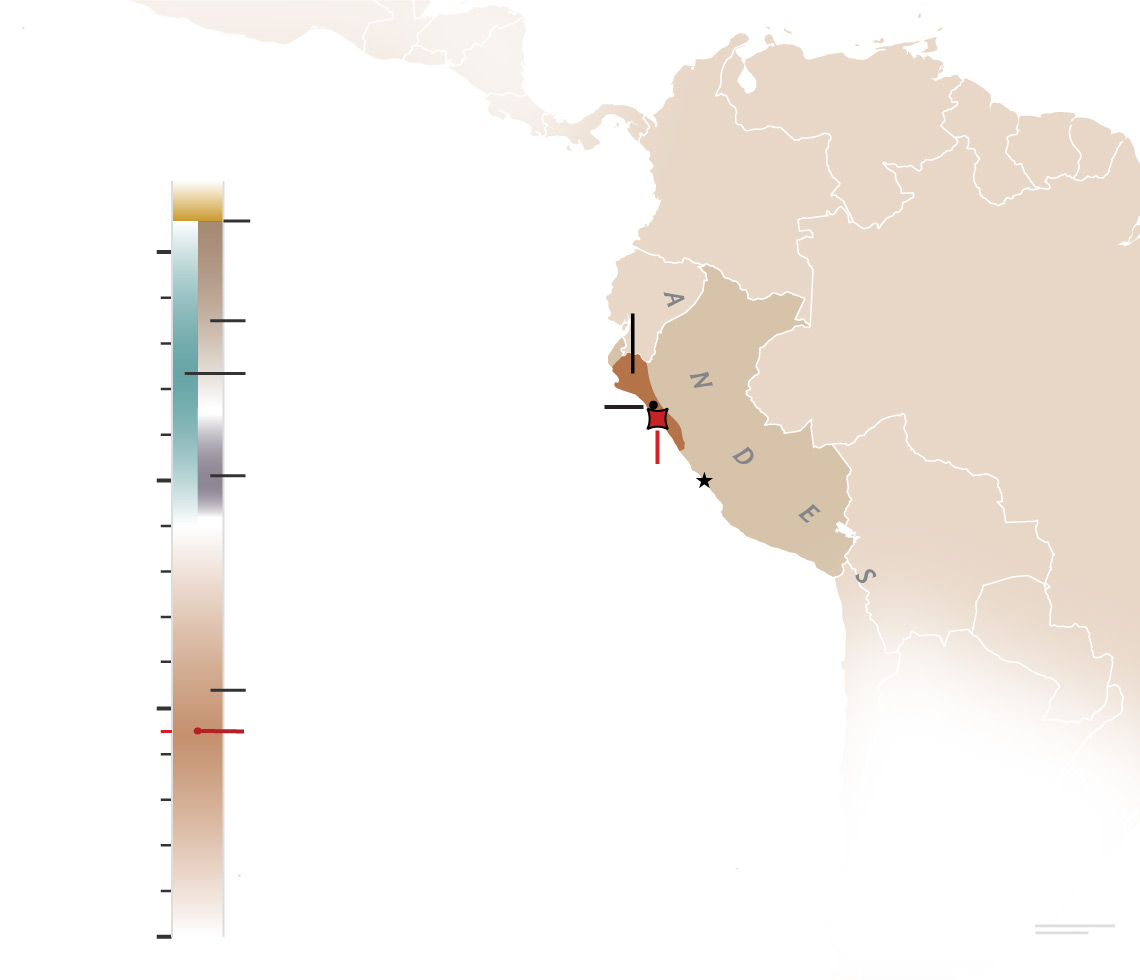 The Moche flourished for more than seven centuries in Andean river valleys in present-day northern Peru. Almost a thousand years before the Inca, El Brujo was one of many seats of power in the region.

Research has included unwrapping the 20 layers of fabric that wound around the Señora’s body and enveloped a wealth of artifacts, many of gold, silver, and gilded copper. (Read “Mystery of the Tattooed Mummy.”)

The Señora was only in her mid to late 20s when she died. Why she was buried with all the finery, and precisely what role she played in her community are still mysteries. “Without written records, we don’t know who she was,” says John Verano, an anthropologist from Tulane University who assisted in both her unwrapping and her facial reconstruction.

Clearly she was an important person. At just under five feet tall and slightly built, she was no battle-ready warrior. But perhaps she was the wife of a ruler—or even a ruler in her own right.

To solve the mystery of what she looked like, investigators first had to produce digital images of her mummy. In similar cases, such as King Tut and Ötzi the Iceman, bodies have been scanned with a stationary medical CT machine. But the Señora had her pictures taken with state-of-the-art, hand-held laser scanners designed by FARO, a 3D technology company. The devices were originally created for industrial applications, but they’re now proving useful in forensic investigations and in cultural heritage projects like this one.

After the scanned data were entered into a computer, forensic experts began to rebuild the Señora’s face. Using specialized software, they first stripped off the facial skin to expose the bones of the skull.

From there, they proceeded as if she were a homicide victim—in a very old, very cold case. They placed tissue-depth markers according to averages gleaned from cadavers, and then added the facial muscles. “It’s the exact same process you’d go through hands-on in the traditional method, adding clay to a model, but it’s rolled into the digital environment now,” says Joe Mullins, a forensic artist for the National Center for Missing & Exploited Children in the U.S. who was a consultant for this project.

The mummy’s skull displays the high cheekbones and facial proportions that are typical of the Moche. But a living person also has soft features that usually don’t survive after death, so the rest of the reconstruction work involved interpretations based on educated guesses.

The Señora, in fact, is not in the best of shape. Her lips have retracted, her nose is gone, and her eyes and eyelids are dry and sunken. That meant the experts had to rely on other sources for clues about what she may have looked like: the people portrayed on Moche pottery, studies of excavated Moche skeletons, photographs of northern Peruvians taken a century ago, and the faces of Moche descendants who live in the area around El Brujo today.

Once the face had been fleshed out on the computer, the entire head was printed in 3D. A model for a museum display was then created in fiberglass. But that model was as blank as a mannequin, bringing up another set of questions. What color were the Señora’s eyes? What did her eyebrows and eyelashes look like? What was the shade of her skin? And to make her come to life fully, she also needed clothing and jewelry that were appropriate to her elevated status.

Fernández López worked out those details with a sculptor who specializes in recreating historical figures for museums. “It was very emotional to see that final stage of the reconstruction,” she says. “It’s as if this woman had been resurrected. I said to myself, ‘OK, Señora, you’re with us once again.’”

The museum at El Brujo is now creating a special gallery to showcase the reconstructed face. Set to open at the end of August, it will also include displays on the technology that the project used, the visual resources that were consulted, and various interactive presentations. “We want people of all ages to have a unique, memorable experience that connects them with the Señora of Cao,” says Fernández López.

The locals have already embraced the Señora as one of their own, often representing her in civic events and school activities. “People are very proud of her,” says Fernández López. “She turns up in discussions about the indigenous community’s cultural identity and has become an icon of Peruvian womanhood.”

Now the people of northern Peru have undeniable proof that this distinguished, powerful woman from long ago looked just like them. “I think it’s going to be particularly important for children,” says Verano. “Looking into her eyes, they’ll be able to see their own relatives from town, and their own ancestry. It’s something that a mummified face just can’t give you.”