Electric Cars May Rule the World’s Roads by 2040

New analysis suggests the gasoline engine may be like the horse-and-buggy a century ago: doomed to a rapid demise.

Electric vehicles will one day push gas- or diesel-powered ones to the curb—but how soon? Sooner than you might think, according to researchers at the International Monetary Fund and Georgetown University: Based on how quickly horses and buggies disappeared in the early 1900s, the researchers argue, more than 90 per cent of all passenger vehicles in the U.S., Canada, Europe and other rich countries could be electric by 2040.

Along with a spate of recent commitments to electric vehicles by governments and car companies, the study offers hope about the prospects for weaning the transportation sector off carbon. Of more than one billion registered vehicles on the road today, only two million are electric (with one million of those in China). But if EVs catch on as fast as the researchers project, it could reduce oil use by 21 million barrels a day and cut CO2 emissions 3.2 billion tons a year — equivalent to 60 percent of total U.S. emissions today.

Other studies project a slower rollout, although newer ones tend be more aggressive. Bloomberg New Energy Finance recently bumped up its estimate of the EV market share in 2040 from 35 per cent of all new car sales to 54 percent. RethinkX, an independent think tank, is even more bullish, saying most U.S. vehicles will be electric by 2030 —just 13 years from now.

The authors of the IMF-Georgetown working paper, “Riding the Energy Transition,” base their own optimism on an analysis of past technology transitions, especially the one from horses to cars.

“We were surprised at how fast cars replaced horses as the main means of transport in the early 1900s,” says IMF economist Fuad Hasanov. “It happened in only 10 to 15 years in spite of the many hurdles.” By comparison, the barriers to adopting electric vehicles today seem small.

No Gas Stations. A Lot of Manure

In 1910 there were few paved roads in America, and the biggest worry in cities was what to do with all the horse manure that was piling up. Gasoline was hard to find; today’s massive infrastructure of refineries and gas stations was just beginning to be built. Driving one of Henry Ford’s new Model T’s was a daunting change from a horse, with or without buggy, and it was as affordable to Americans then as a $137,000 car would have been in 2015—which is close to twice the price tag of Tesla’s Model S. Not surprisingly, very few people bought Model T’s at that price.

And yet by 1921, the price had dropped to the equivalent of $35,000, governments and the oil industry had spent massively on roads and other infrastructure, and sales of Model T’s shot up to a million a year. By 1925 they were nearing two million.

If electric vehicles are adopted at that pace, say Hasanov and Reda Cherif of IMF and Aditya Pande of Georgetown, they’ll account for 5 percent of all vehicles by the late 2020s and 36 percent by the early 2040s. The researchers call that the “slow-adoption scenario.”

In their “fast-adoption scenario,” the researchers extrapolate the rise of electric vehicles, not from the rate at which gas-powered cars were adopted a century ago, but from the rate at which horses disappeared. That happened much faster—in part because public transit was expanding rapidly at the same time. Many people who gave up horses didn’t buy cars at first; they hopped on electric street cars.

Today there’s no comparable public transit boom, and switching from gas-powered to electric cars is much easier than switching from horses to cars was a century ago. The researchers conclude that the fast-adoption scenario—which matches the actual EV adoption rate between 2011 and 2015—is much more likely. 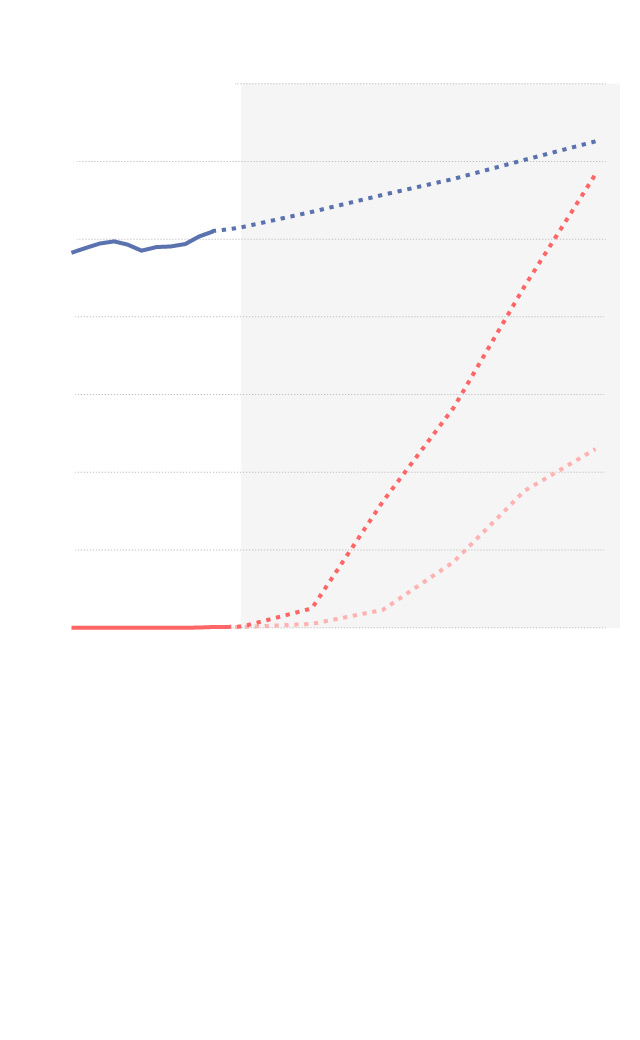 Projection produced in five-year increments starting from 2017 and is

based on an assumption of constant vehicles per capita with around 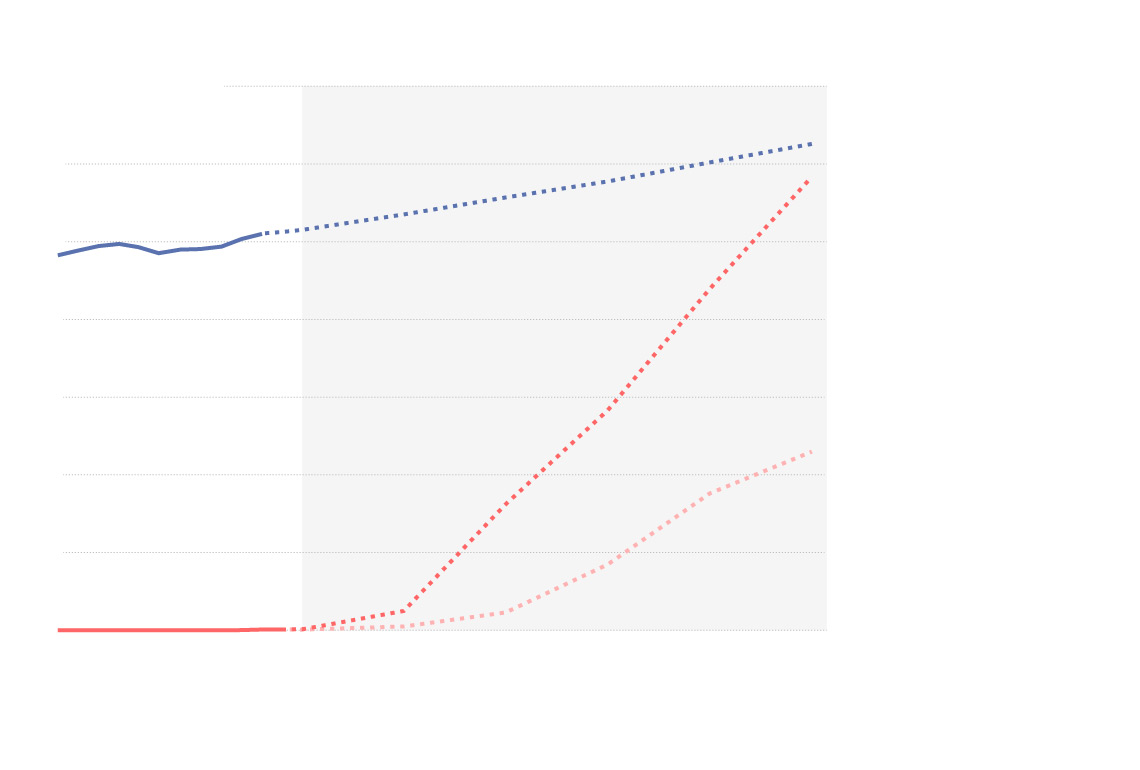 of constant vehicles per capita with around 0.8 percent U.S. population growth per year. 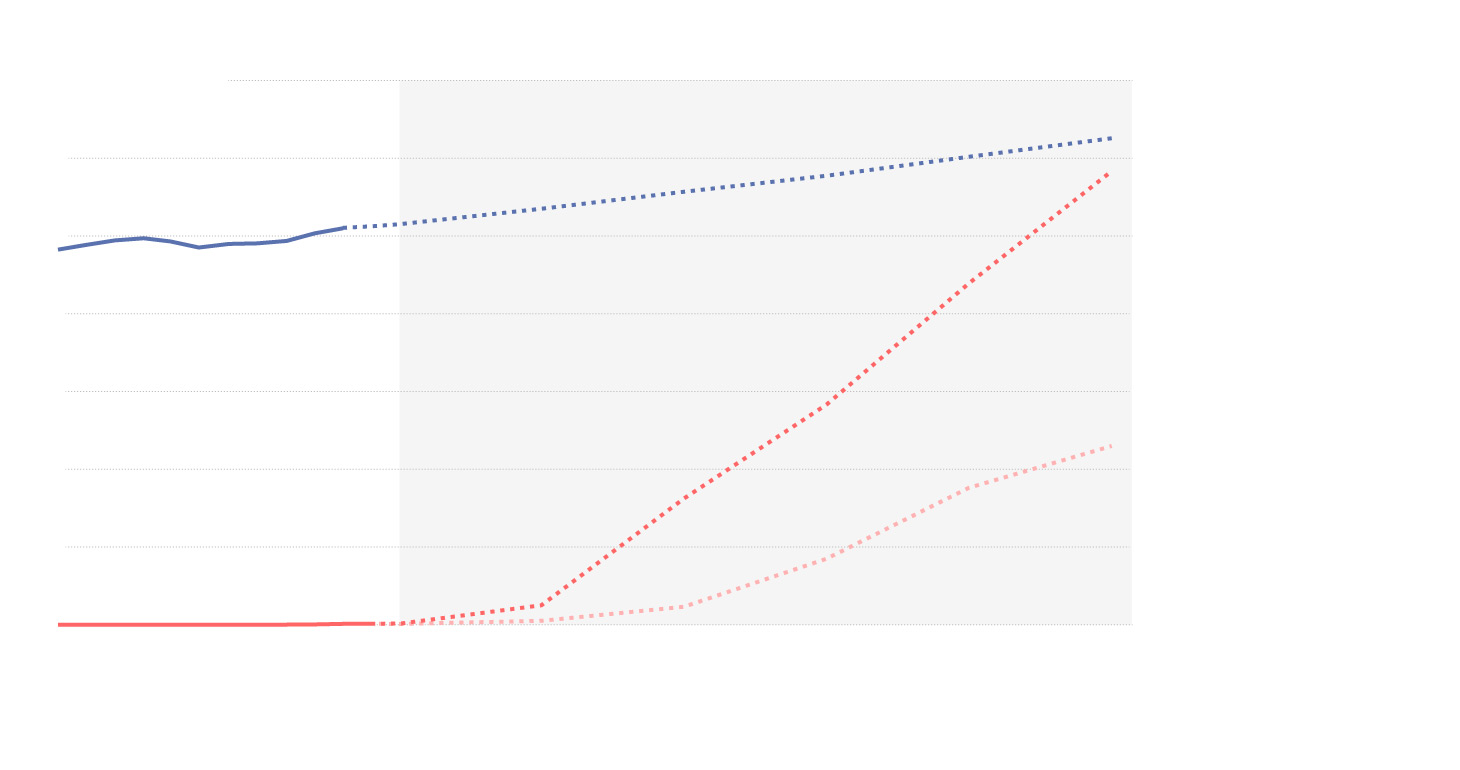 the U.S. would be electric.

capita with around 0.8 percent U.S. population growth per year.

If that sounds implausible, consider cell phones, says Cherif. In the 1980s, when cell phones were bulky, expensive, and had a short battery life, experts predicted that by 2000 the industry might sell 900,000 units a year. Actual sales that year were 109 million—and by 2014 another unexpected technology transition had happened: Virtually all of those phones were smart phones.

“Adoption of a new technology like electric cars may seem slow or look like it’s never going to happen,” says Cherif, “until it passes a threshold and then it just takes off.”

Tesla’s new Model 3 is priced at $35,000 and can travel 220 miles on a full charge. That may be the threshold price for electric vehicles, Cherif says. Between March and June 2016, more than 400,000 people placed $1000 deposits to pre-order the Model 3—a car that didn’t yet exist. The first 100 Model 3s were delivered this past August.

Those four months in 2016 may come to seem like the car and oil industries’ “Kodak Moment”. Kodak made film for cameras and was one the world’s most powerful companies; it invented the digital camera in 1975. But it failed to adapt to the new technology and filed for bankruptcy in 2012.

Fearing a similar fate, just about every automaker is now jumping on the electric-powered bandwagon. Sweden’s Volvo Car Group will only produce electrified models — hybrids and fully battery powered — by 2019. Jaguar Land Rover will follow suit in 2020. VW has pledged to become the world leader in electric vehicles by 2025. Even James Bond could be driving an all-electric Aston Martin as soon as 2019.

Governments are joining in. Norway will ban the sale of fossil fuel-burning cars and vans in 2025. Governments in the U.K., the Netherlands, and France have promised the same by 2040. Germany, home of Volkswagen, Mercedes-Benz and Porsche, is talking about a similar ban.

China just announced it too will ban the sales of gasoline and diesel vehicles—though it has yet to set a timetable. China is the world’s biggest car market, selling 20 million vehicles a year. It already has more than 40 different electric vehicles available, most made by Chinese companies.

This past May India’s Energy Minister Piyush Goyal predicted to National Geographic that only electric vehicles will be sold in India by 2030— even without a government restriction, because they are cleaner, quieter, longer-lasting, and will cost less.

In China and India but also in western Europe, air pollution is providing a big motive to go electric, says Bloomberg analyst Albert Cheung. Conversely, any reduction in government commitment to fight air pollution could slow the uptake of electric vehicles. So could super-cheap gas prices and a lack of investment in charging infrastructure.

But all in all, Cheung says: “it is looking harder and harder to apply the brakes to that electric vehicle bandwagon."

The Revolution Will Be Autonomous

Stanford economist Tony Seba pushes the vision of an EV revolution a step further: He says it’s coming in the 2020s, and it will be self-driving. In a new study, “Rethinking Transportation 2020-2030”, Seba and his colleagues at RethinkX say 95 percent of all passenger miles will be in autonomous electric vehicles by 2030.

How is that even possible? First, Seba assumes electric vehicles will be much cheaper to buy than today because of falling battery costs and the fact that they’re easier to manufacture and maintain — only 20 moving parts versus 2000 for gasoline or diesel vehicles. “Today’s electric vehicles have gone over 200,000 miles and all they needed were new sets of tires,” Seba says. One Tesla S has logged 500,000 miles with the same battery.

Second, according to Seba, the majority of vehicles will be owned not by individuals but by transportation companies. Commercial fleets are eager for electric vehicles—especially self-driving ones. Eliminating drivers could generate huge cost savings for the likes of UPS and FedEx, Uber and Lyft. Self-driving taxis and commercial vehicles are being tested in Pittsburgh, Phoenix, and Boston, as well as Singapore, Dubai, and Wuzhen, China.

Cost is what will push Americans out of their driver seats, Seba says. Electric vehicles are four times more energy efficient and cheaper to fuel; autonomous ones could be even better. Owning and operating the average gasoline-powered vehicle costs close to $10,000 a year when driven 15,000 miles, according to the auto club AAA, and that vehicle is parked 95 percent of the time.

In Seba’s vision, there will be 200 million fewer passenger cars on American roads in 2030. Instead there will be millions of self-driving vehicles that anyone can access with the touch of a button, to go where they want for a few pennies per mile.

“Instead of spending $10,000 a year for road transportation, a family might spend only $1,000,” Seba says. “It will make no rational economic sense to own a car, because it will be so cheap to hail an autonomous electric vehicle.”

But will it still make irrational, emotional sense? Aren’t cars part of the American identity? For now maybe they are—but so were horses once.

Editor's note: An earlier version of this story misstated the price of a 1910 Model T. The figure of $137,000 in 2015 dollars is a measure of the car's affordability in 1910 (not its actual price), taking into account that Americans today are on average much richer than in 1910.