How one mistake led to a harrowing race to save hundreds of men trapped in the Florida Keys.

Fred Ghent and Ray Sheldon were honest men who made a mistake. But when they underestimated an approaching hurricane, at least 250 luckless World War I vets died, caught in the path of the most intense hurricane that has ever struck the United States. 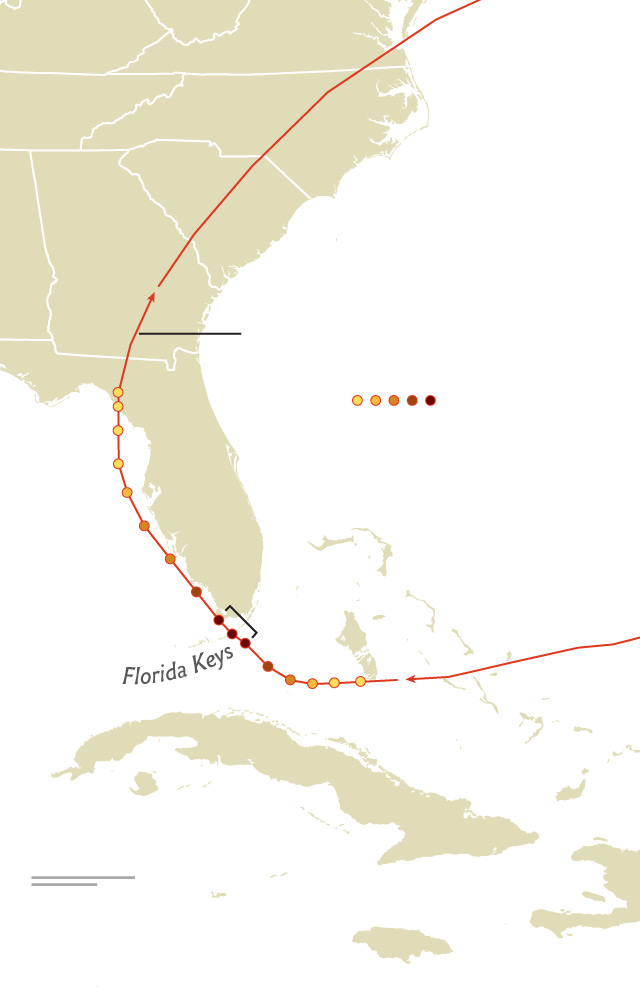 It was late summer, in the depths of the Great Depression. In the once-prosperous city of Key West, residents were trying to survive on an average monthly income of $7—about $125 in 2017 dollars. The city had declared bankruptcy.

The Federal Emergency Relief Administration came up with two options: move Key West’s 12,000 residents to Tampa, or clear the garbage from the streets, fix up the quaint but dilapidated buildings, and repackage Key West as a tourist attraction.

To build much-needed bridges and roads for the venture, the government came up with a plan. They’d send jobless World War I veterans to the Keys to build the road. They’d pay them $30 a month—about $540 in 2017 dollars—plus free room and board.

Ghent was a compassionate man, an Alabama native and engineer. But the veterans he supervised were a surly, rambunctious lot. Many suffered from what we today recognize as post-traumatic stress disorder. In 1935, it was known as “shell shock.”

In 1932, thousands of the same vets had been chased out of Washington, D.C., by tanks and bayonets after appealing to President Herbert Hoover for early payment of a bonus they’d been promised for their wartime service. Evicting the vets was a public relations fiasco for Hoover, and probably helped cost him the 1932 election.

For his successor Franklin Roosevelt, sending the veterans to the remote Keys seemed the perfect solution—it gave them work and got them far from public scrutiny.

The natives living in the island village of Islamorada about 80 miles south of Miami didn’t know what to make of the troubled men. They tried to remember their Methodist teachings of tolerance and compassion, but sometimes it was a stretch—especially when the vets turned to boozing to drown their misery.

“I often thought that it was almost a crime to allow so much drinking in the camps,” said John Russell, then a Postmaster and a community leader in Islamorada, where the work program was headquartered in a hotel. “When they got paid, they would drink until it was all gone. Then they would wait until their allowances came again to get more.”

And when they drank, they brawled. “We always had boom days then, suturing their wounds,” said Dr. Lassiter Alexander, a physician at a small hospital that cared for the vets.

Russell and other natives did what they could for the men. But the sea-savvy islanders worried about the vets’ flimsy shacks on the beach, only a foot or two above sea level. Hurricanes were a fact of life in the Keys, and the natives knew that even a minimal hurricane would swamp the camps with seawater and shred the shacks.

Fred Ghent knew hurricanes were a threat, but in the early summer of 1935, he thought he’d solved that problem. He’d discussed sending a special Florida East Coast Railway train from Miami to evacuate the vets should a storm come their way.

But he’d managed to misunderstand the communications. He thought a train would be kept in constant readiness for use at a moment’s notice. Railway officials tried to tell him they’d need several hours to assemble a train and get it to the Keys, and if he wanted a train constantly parked on a sidetrack in Miami, he’d have to pay for that.

When Ray Sheldon, a Massachusetts native, was hired as the new supervisor of the three work camps, Ghent conveyed his mistaken impression to Sheldon that he’d taken care of the hurricane threat. Sheldon didn’t ask questions.

In late August 1935, a patch of windy thunderstorms rolled off the west coast of Africa and rumbled across the Atlantic Ocean. These storms—known as tropical waves—are the seeds from which hurricanes can form.

Most tropical waves don’t develop into hurricanes. But sometimes conditions are exactly right. The storms pick up a counterclockwise circulation imparted by Earth’s rotation, draw energy from warm, late summer seawater, and evolve into a tropical storm.

Meteorologists didn’t have a lot to work with to help them track these storms in 1935. Radar was in its infancy, and weather satellites were the stuff of science fiction.

Still, the U.S. Weather Bureau—predecessor of the Weather Service—had launched a national advertising campaign in July 1935 to assure the nation that Atlantic hurricanes would no longer avoid detection.

“Uncle Sam has perfected his hurricane service for this area, perfected it to the extent of putting a decided crimp in their stealthy approach,” the advertising copy read.

It was a foolish statement.

By Labor Day weekend, the developing storm had slipped into the Bahamas. In the Weather Bureau’s advisories, it was little more than a windy rainstorm. On Saturday, Sheldon and his new wife went to Key West for a brief postponed honeymoon.

But one of their subordinates, Sam Cutler, was deeply worried. He talked by phone with Ghent, who was back in his Jacksonville office, urging him to summon the train and evacuate the vets.

Others who’d worked with Cutler, a former safety engineer, regarded him as conscientious and highly competent. But many among the work camps’ administrators regarded him as a very nervous fellow who imagined things.

Ghent wasn’t ready to evacuate. Sheldon would make the decision when he returned from his honeymoon, he said.

Early Sunday morning, Sheldon’s phone rang in his Key West hotel room. It was a local Weather Bureau meteorologist. Things could get rough Monday. He might want to get back to the camps.

Sheldon called a meeting of administrators late Sunday afternoon. A few started to offer suggestions, but Sheldon made it clear he was in charge and would make the decisions.

He still wasn’t read to evacuate. He knew the drunken, surly vets would be nearly impossible to handle aboard the train. He wanted to wait until the last possible moment.

Cuban officials weren’t so sure about the storm’s location, and decided to get a fix on it. On Monday afternoon, a daredevil American pilot named Len Povey, who’d been hired by Cuban political strongman Fulgencio Batista to train military pilots, climbed into the open cockpit of a small biplane fighter. He was going to fly out over the Straits of Florida and find the hurricane.

Around mid-afternoon, he spotted it.

“It appeared to be a cone-shaped body of clouds, inverted, rising to an altitude of 12,000 feet,” he later told the Associated Press.

“The waves in the sea below broke against each other like [they were] striking a seawall,” Povey said.

He also discovered that the storm was many miles north of the Weather Bureau’s plot, and was heading for the Florida Keys.

Around 2 p.m. on Monday, Labor Day, Fred Ghent called to order the evacuation train. It was then that he discovered that it would take workers hours to assemble the train in Miami.

At 4:25 p.m., engineer J.J. Haycraft opened the throttle of his steam locomotive, and the evacuation train slowly moved out of the yard. In the Keys, about 400 vets waited while their flimsy camps started coming to pieces.

“It was already blowing hard, and we piled out as fast as we could,” said Lloyd Fichett, from Terra Alta, West Virginia. “As we came out the door the corners of the mess hall had started breaking off, and it began blowing harder each minute. By the time we got to the railroad tracks, it hit us with all its force. The canteen blew down and wood started flying in all directions. It was terrible.”

As the train left the mainland peninsula and entered the islands, waves were breaking across the tracks, and Haycraft had to slow the locomotive. A few miles from Islamorada, the train was snatched to a jarring stop when it snagged a steel cable that had blown across the tracks. Eighty precious minutes were wasted untangling it.

In Islamorada, hotel owner Ed Butters and his family were riding out the storm in his automobile. Butters was fascinated and horrified as he watched the needle of his barometer fall, an indication that the center of the storm was moving closer. When the weather is calm, a barometer will read just under 30.00 at sea level. Butters held his barometer aloft, shone his flashlight and called for the others’ attention. The needle had fallen to an unbelievable reading of 26.00. Butters rolled down his car window and hurled the instrument into the storm. He couldn’t stand to watch it any longer.

Around 8:15 p.m., the rescue train rolled into Islamorada and stopped to pick up Ray Sheldon and other administrators. Sheldon climbed aboard the locomotive. Moments later, the full fury of the storm’s winds—likely 200 mph—and massive storm surge slammed into the island. A newspaper reporter aboard the train later recalled that the passenger cars were “swirled about like straws.” Only the 160-ton locomotive remained upright on the tracks.

Veterans were dying as the work camps disintegrated. They were speared by flying lumber, brained by coconuts flying nearly 200 miles per hour, or simply blown off the islands to who knows where. When it was over, more than half of the 400 or so men in the camps were dead. Counting the natives, at least 408 were killed in the storm—almost half the people living between Key West and Miami.

Since Ed Butters threw away his barometer, his astonishingly low reading could not be verified. But the official reading, confirmed by the U.S. Weather Bureau, wasn’t much higher—26.35 inches, making it the most intense of any U.S. hurricane at landfall to this day.

When reporters finally got to the shattered work camps, the nation was outraged. Sheldon and Cutler survived the storm, and many blamed Sheldon and Ghent for the vets’ deaths. But a hasty investigation conducted by WPA officials concluded the vets’ deaths were “an act of God.” That didn’t sit well with many ministers, who said God may have caused the storm, but men had left the vets in harm’s way. Yet the verdict stood. The storm, given no name but the Labor Day Hurricane of 1935, began slipping into the mists of history.

Award-winning author Willie Drye is working on a new edition of his first book, Storm of the Century: The Labor Day Hurricane of 1935. He is represented by the Jeanne Fredericks Literary Agency and by Straight Arrow PR.