The West Antarctic Ice Sheet Seems to Be Good at Collapsing

As it shrinks, sea level rises—and a new study finds it shrank dramatically even when Earth was not as warm as today.

Scientists have discovered that the West Antarctic Ice Sheet underwent a major retreat between 10,000 and 12,000 years ago, at a time when the world was actually cooler than it is today. The collapse happened at the close of the last Ice Age, and it left the ice sheet 135,000 square miles smaller than it is today – a difference nearly as large as the state of Montana.

“That the ice sheet could retreat beyond where it is today, in a climate that was likely quite a bit colder than today, points to extraordinary sensitivity,” says Robert DeConto, a glaciologist at the University of Massachusetts Amherst, who was not involved in the research.

Most researchers had believed that the West Antarctic ice sheet hadn’t been much smaller than it is now for at least 120,000 years. “We were really surprised,” says Reed Scherer, of Northern Illinois University in DeKalb, who co-authored the new paper, published today in the journal Nature, with nine other scientists.

West Antarctica is considered the most vulnerable of Earth’s three major ice sheets. It rests in a deep, broad bowl that dips thousands of feet below sea level – exposing it to warm ocean currents. It would raise sea level by 11 feet if it collapsed.

(Read more here about the threat from melting Antarctic ice.)

Scientists hope that by reconstructing the past advances and retreats of the West Antarctic ice sheet, they can predict its future fate amid global warming.

Another paper published in the same issue of Nature confirmed the urgency: It found that Antarctica as whole lost more than 3 trillion tons of ice between 1992 and 2017. Most of that came from West Antarctica, where the rate of ice loss has tripled in the last quarter century.

The new evidence of West Antarctic fragility stems from two research expeditions that visited the region in the last several years. Scherer was part of the first one. It began in January 2013, as a convoy of tractors, towing a million pounds of equipment on massive sleds, arrived at a remote spot on the ice sheet, just 380 miles from the South Pole. The place seemed unremarkable – nothing but flat, wind-sculpted snow in every direction.

The expedition’s true objective lay half a mile beneath the surface: a body of water, called Lake Whillans, sealed under the ice sheet. The lake’s outline had been mapped with ice-penetrating radar. No human had ever laid eyes on it. But that January, the equipment on those sleds was assembled into a monstrous drill that, with a jet of hot water, melted a hole, 20 inches wide and 2,600 feet deep – straight through the ice, and into the lake.

Scherer and his colleagues plunged a hollow cylinder into the bottom of the lake, and hoisted up 18 inches of mud – gritty stuff, full of the fragments of Antarctic bedrock, pulverized by sliding ice. When Scherer viewed that mud through a microscope, he found it littered with delicate shards of curved, dimpled glass: the ancient shells of diatoms, tiny marine creatures that had lived in this place at a time when it was covered not by ice, but by ocean – perhaps with a bit of ice floating on top.

Carbon-dating of the mud showed that some of those diatoms had been deposited in what is now Lake Whillans as recently as 10,000 years ago—which was startling enough. But Scherer and his colleagues tested mud from nine other holes inland from Lake Whillans, as far as 120 miles from the present ice edge. They found young material in every single one. “That was the real shocker,” says Scherer.

It suggested that the West Antarctic ice sheet had pulled back at least 120 miles. But even that is “just a lower limit,” says glaciologist Slawek Tulaczyk of the University of California at Santa Cruz, who co-led the drilling expedition.

Since glaciers constantly drag along the mud at their base as they flow toward the coastline, he explains, the young mud in the boreholes could have come from as far as 300 to 400 miles inland—meaning that 10,000 years ago the edge of the ice sheet may have been as far inland as that.

Even as Scherer, Tulaczyk and their colleagues grappled with these surprises, another scientist, unbeknownst to them, was making his own discovery.

Jonathan Kingslake, a young glaciologist now at the Lamont-Doherty Earth Observatory in New York, spent two months in late 2014 camping on the opposite side of West Antarctica, 800 miles from Lake Whillans. Driving snowmobiles roped together in a single line—lest one of them plunge into a crevasse—he and his guide towed a sled carrying an ice-penetrating radar. As they traveled, sometimes 15 hours a day, the radar traced internal layers and cracks hidden thousands of feet down in the ice.

In his tent one night, reviewing the day’s data on his laptop, Kingslake saw something intriguing. The radar’s black and white traces showed a series of bright lines rising from the bottom of the ice.

Those lines, he ultimately decided, were the scars of old cracks that had opened, long ago, at the bottom of the ice sheet—at a time when it wasn’t thick and sitting on bedrock, as it is now at that place, but thinner and floating on the ocean. The cracks had formed as the ice skidded and juddered over a subglacial mountain. Then they had filled with seawater and refrozen. 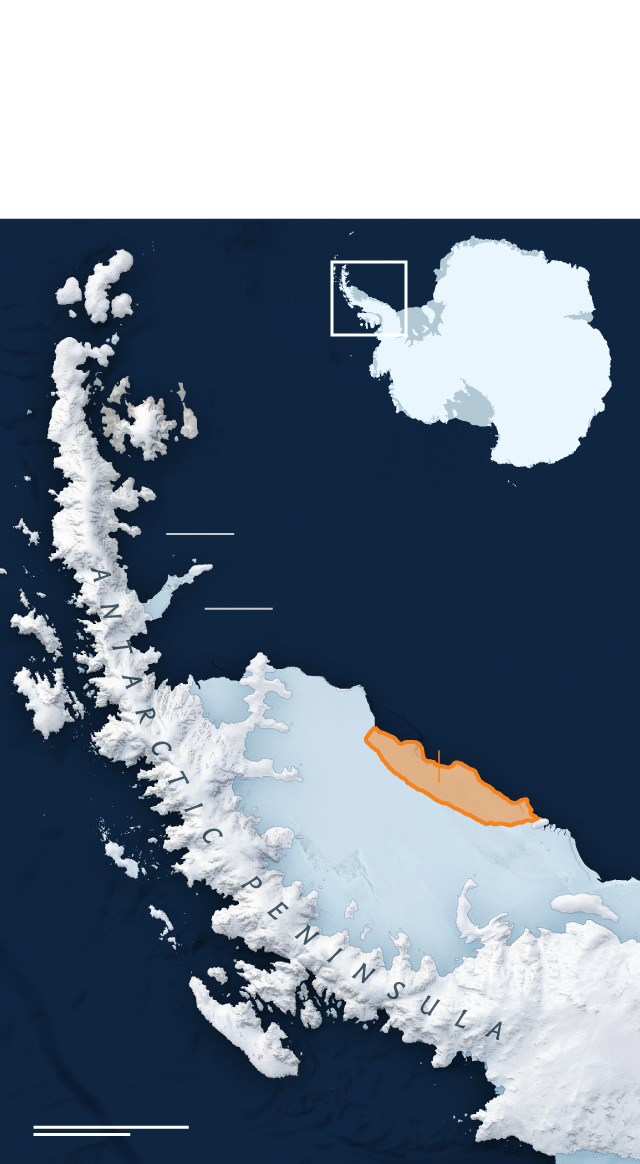 The Birth of an Iceberg

The chunk of ice that broke off the Larsen C Ice

Shelf on July 12 is the size of Delaware and weighs

around one trillion tons, making it one of the largest

icebergs ever recorded. The detachment may

hasten the collapse of the entire ice shelf. 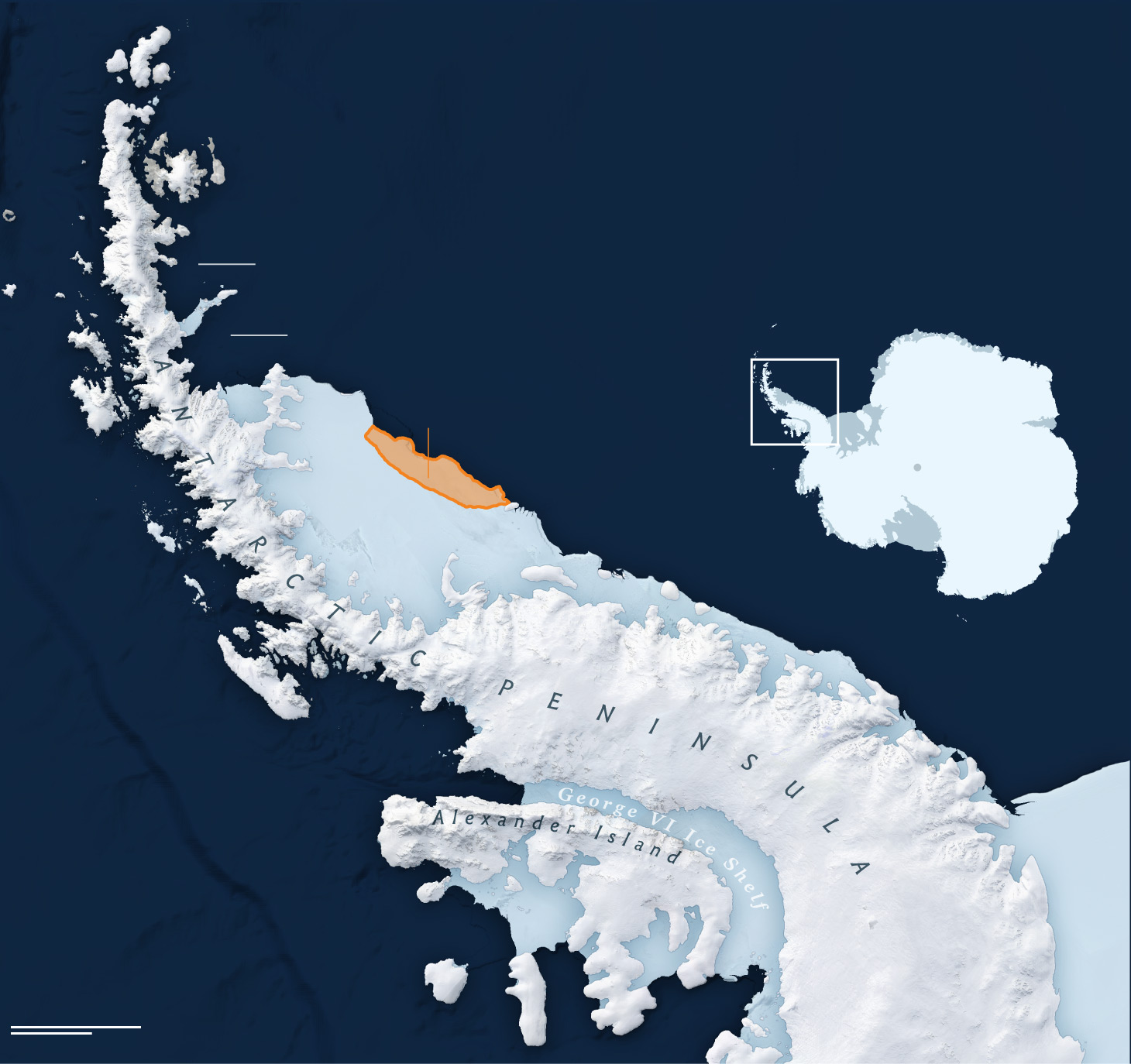 The Birth of an Iceberg

The chunk of ice that broke off the Larsen C Ice Shelf on July 12 is the size of Delaware and weighs around one trillion tons, making it one of the largest icebergs ever recorded. The detachment may hasten the collapse of the entire ice shelf.

On the far side of West Antarctica from where Scherer and Tulaczyk worked, Kingslake had found independent evidence that the ice sheet had once retreated far inland. Reviewing all the evidence, Torsten Albrecht of the Potsdam Institute for Climate Impact Research in Germany estimated that the retreat happened 10 to 12 thousand years ago. Compared with the present, Albrecht calculates, West Antarctica contributed roughly 30,000 cubic miles of ice to sea level rise— equal to 130 trillion tons.

Rebound Won't Save Us

At that time, the ice sheet was already in the midst of shrinking from its Ice Age maximum, when it extended 600 miles further out to sea than it does today. And the ocean floor sat at least 1,300 feet lower than it does today—because the weight of the massive ice sheet had pressed down on the Earth’s crust.

As the ice retreated, thinned, and floated, this allowed warm ocean currents to slither in along the deep ocean floor. That melted the ice ever more rapidly, sending the ice sheet into full-blown collapse. It roared right past its present-day boundaries, retreating at least 120 miles further inland than today.

This runaway collapse was eventually halted by slow changes in the Earth’s crust. The removal of all that ice allowed the crust to rebound upward. Researchers calculate that the seafloor under the ice sheet rose as quickly as 7 inches per year, or more than 1,300 feet over the course of several thousand years. This sheltered the remaining ice from the deep ocean currents that were melting it, allowing it to stabilize, re-advance, and eventually reach its present-day size—perhaps as little as 2,000 years ago.

As the planet warms today, will this sort of glacial rebound protect us from a wholesale collapse of the West Antarctic ice sheet, and the catastrophic sea-level rise that would result? Since temperatures and atmospheric carbon dioxide levels are already far higher than they were 10,000 years ago, and still rising, Tulaczyk warns, the glacial retreat and rebound observed back then can’t simply be extrapolated to the future.

But in any case, glacial rebound is too slow a process to be a comfort to humans. It would not rescue coastal cities from sea level rise, Tulaczyk says, “unless we are willing to hold our breath for thousands of years underwater.”