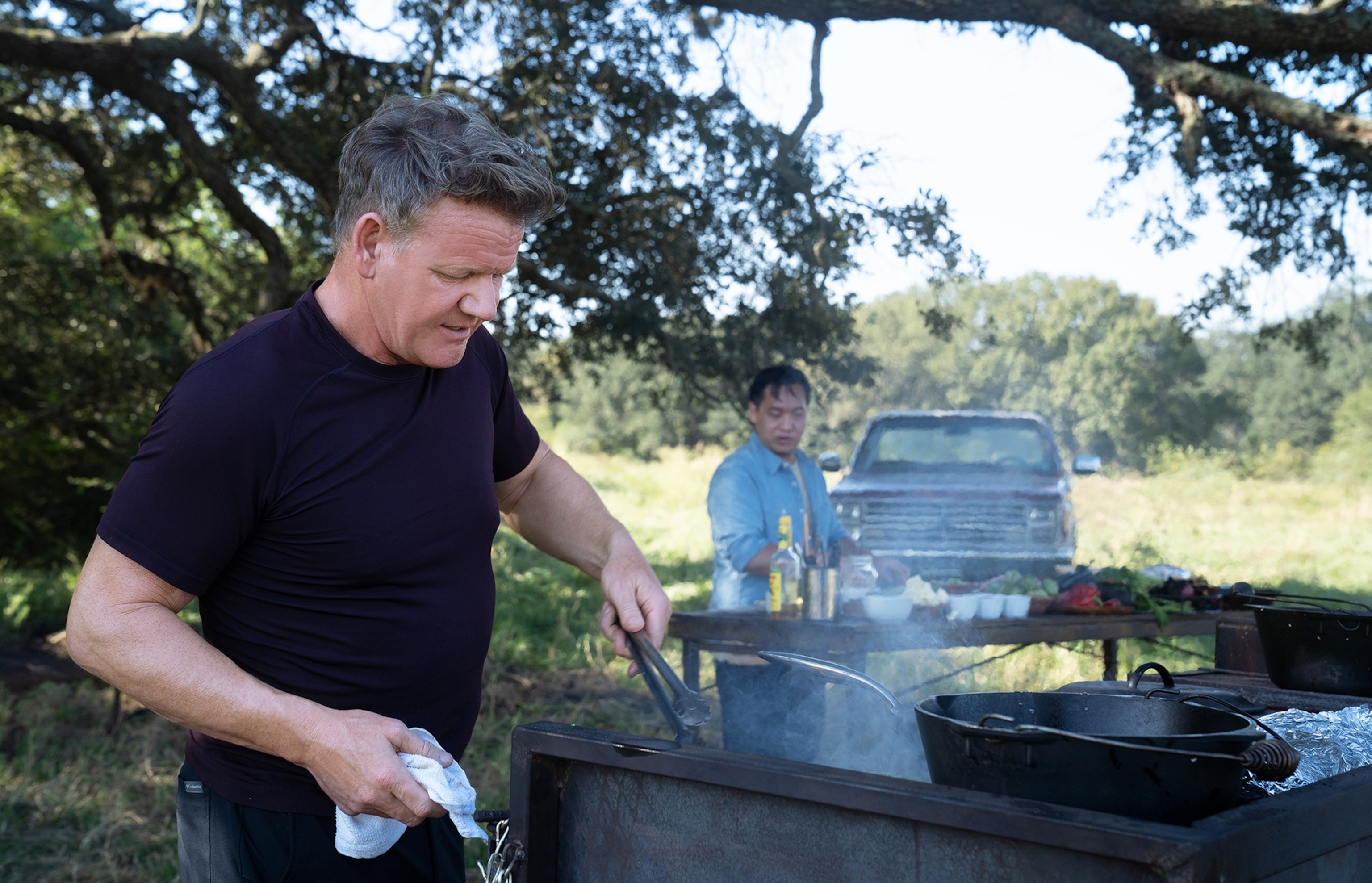 In the rugged, vast terrain of south-central Texas, Gordon discovers a greater understanding of what it means to be a Texan.

Wearing a black felt cowboy hat while astride a white horse named Mouse, Gordon Ramsay trails two horse-savvy girls as they herd cattle on a south-central Texas cattle ranch. With their helpful instructions to “feel the rhythm,” “don’t be tense,” and most importantly, “don’t fall off,” Ramsay has his hands full on the uneven terrain. But it’s the price he’s willing to pay for some of the best beef in the Lone Star State. “I’m in a flimsy pair of trousers and a cowboy hat, trying to blend in with the locals,” he says. “I stood out, for all the wrong reasons.”

Texans have a reputation for their big and bold attitude, a reflection of the behemoth size of the state and its challenging landscape and climate. Scratch the surface, and there’s much more than appearances suggest. “A lot of people view Texas as a dusty, rugged state,” says Chef Justin Yu, Texas native, James Beard Award-winner, and chef/owner of Houston’s Theodore Rex restaurant. “You do have to be tough to make it here, and there are a lot of ingredients that are difficult to work with, but there are beautiful flavors and plenty of depth.”

With its varied terrain that stretches from coastal plains to the rolling hill country, Texas culture has always been about roughing it to some degree. Yu challenges Ramsay to dig deep into the layers of this land to experience true Texas flavor that spans a variety of cultures, making it a much more diverse culinary destination than its reputation might suggest. “Maybe we’ll call it a throwdown,” says Yu, in anticipation of a good old-fashioned Texas cook-off at the end of Ramsay’s adventures, a challenge that Ramsay is more than willing to accept.

The bounty of the land shows in foraging for wild ingredients, like petite native pecans that have a slightly tannic flavor with a buttery sweetness, or prickly pear cactus with its edible paddles that taste like green beans and their pink fruit with a flavor reminiscent of pomegranate. Traditional corn tortillas made from hand-ground masa are essential to Tex-Mex food, a fusion of Mexican and American cuisine, largely as a result of Tejano culture. Aside from beef, a favorite local barbecue protein is pork, and hunters pursue invasive free-ranging feral hogs to keep their numbers under control. Despite playing a key role in the regional ecosystem, the Western diamondback rattlesnake is often considered a pest, with its dangerous venom. But with its light, delicate flavor, the snake’s meat is also a Texan food source for those who can catch one safely.

On his quest to find out whether everything is truly bigger in Texas, despite having to tangle with rattlesnakes and feral hogs, hike through the brush to find pecans, make his own masa, and don a cowboy hat to herd cattle, Ramsay enjoys the challenge. “I knew Texans were a breed of their own,” he says. “But never in my wildest dreams did I know they possess that much grit.”

This article was produced by National Geographic Channel in promotion of the series Gordon Ramsay: Uncharted.