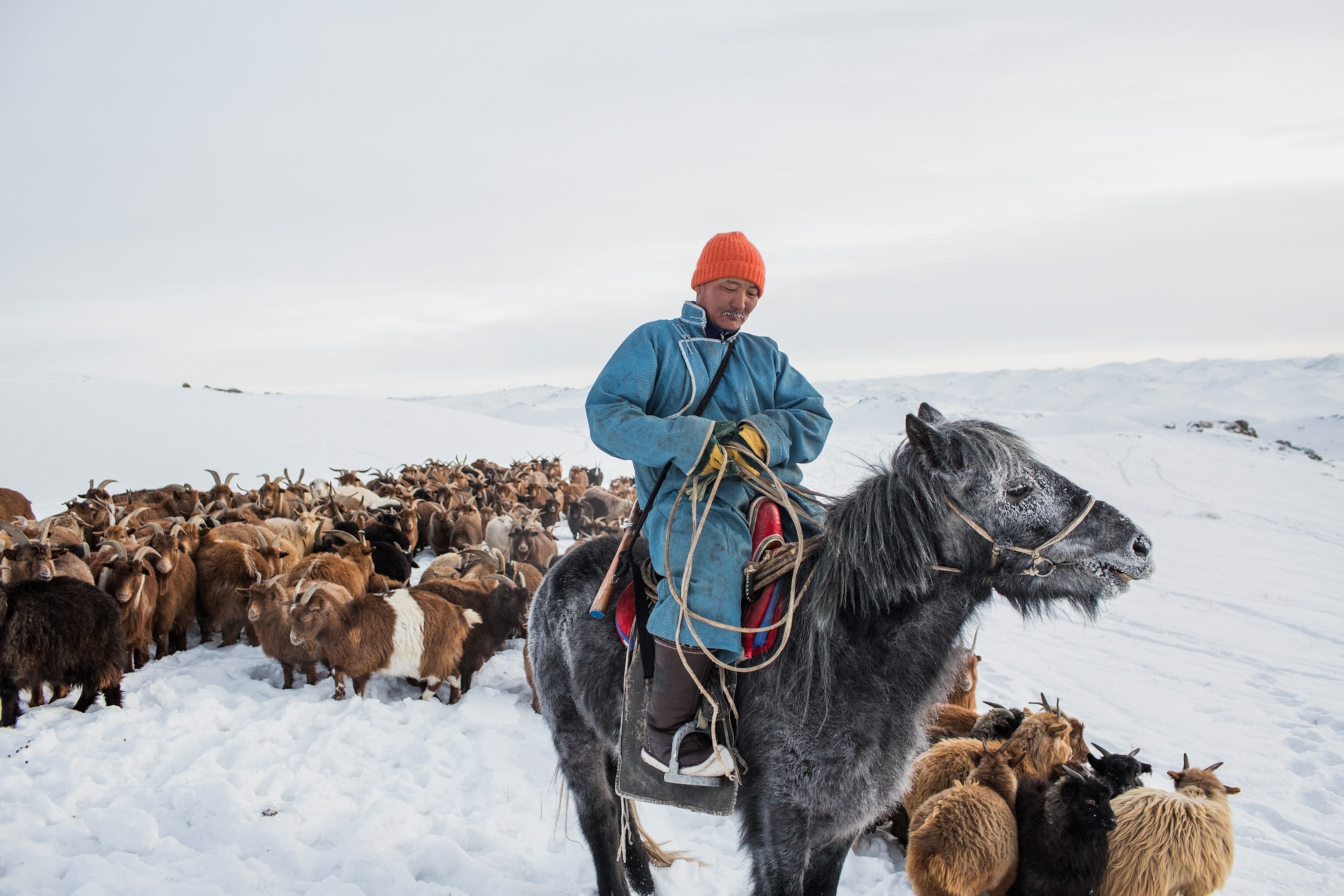 Nomadic herders of the Mongolian steppe are at the mercy of these dramatic winters, and scientists are struggling to understand the lethal phenomenon.

For the second time this decade, extreme winter conditions on the Mongolian steppe caused extensive die-offs of sheep, goats, cattle, and camels, animals that traditional herding communities rely on for their survival.

Due to an ongoing drought, the nomads’ livestock faced a lack of adequate forage in the grasslands along the country’s northern border with Russia, and they went into this year’s winter season much thinner than usual. If a bad winter follows a lean summer, livestock can burn through their fat reserves faster, and herders must turn to their hay reserves months earlier than usual.

This past January, temperatures on the steppe plunged to -58 degrees Fahrenheit—more than 10 degrees below average—and 700,000 animals perished as a result.

Severe winters that kill large numbers of livestock are common enough in Mongolia that there is a local term for the phenomenon: dzud. Now, the consensus among the nomads is that dzud has been occurring more frequently in recent years, and it seems to be getting worse. (Scientists have already shown that a warming Arctic is making U.S. winters worse.)

Patrick Nicholson, director of communications for the Catholic aid group Caritas, spent part of January speaking with people in Mongolia’s Uvs province about this year’s dzud. He says that a local governor, who goes only by the name Batjargal, believes overgrazing and changing climate are exacerbating the problem.

“We used to have four seasons, but now we only have three,” Batjargal told Nicholson. “Before, June, July, and August were warm and with rain. Different types of grass would grow, and the animals would get fat. Now, we have no rain and the wind dries up the grass. It is not what it used to be.”

This is a threat not only to livestock, but to the nomads’ way of life: Bereft of the animals they rely on for food and income, hundreds of thousands of herders have streamed into the country’s capital of Ulaanbaatar, hoping to send their children to school and find work.

Finding solutions is complicated by the fact that dzud is difficult to predict, since the conditions that give rise to the disaster are hard to pin down, says University of Maine climate researcher Bradfield Lyon.

“There’s not just one pattern we can identify and say, Ah! This will lead to problems,” he says. “Even with long-range weather prediction models, it’s difficult to capture how long these things are going to persist. There’s so much variability in atmospheric patterns.”

Different categories of dzud exist: white, for heavy snow that prevents animals from reaching forage; black, for lack of precipitation and long, thirsty months; iron, for winters with a short thaw and subsequent hard freeze that locks up pastures in ice; and cold, for extremely low temperatures that cause animals to burn through their fat reserves.

Between 1940 and 2015, an official “dzud declaration" was made a dozen times, and the phenomenon has killed more than 20 million animals since the start of the 2000s. But Nicholson says that people he interviewed reported that dzud was becoming the norm. While excessive winters might have previously occurred once every decade or so, they’re now happening every year in some parts of the steppe.

Analysis of recent weather patterns and models of future climate suggest that drought may be a factor. (Tree ring studies show that Genghis Khan's secret weapon for invading and conquering was rain.)

Namuntsetseo is seen in her family's home in Uvs Provence.

Summertime temperatures are up an average of 2.7 degrees Fahrenheit compared to centuries past, and that corresponds with an unusually prolonged period of below-average precipitation, says the National University of Mongolia’s Oyunsanaa Byambasuren, who studies tree rings to understand past climate and precipitation patterns.

As a land-locked, semi-arid region similar to the highlands of Montana, Mongolia’s year-to-year rainfall and temperature are notoriously variable. Still, while average precipitation is stable, a reconstruction of summer drought from a 2,060-year-old tree stump suggests that the recent dry spell is unusual compared with the last thousand years. Byambasuren does caution that few long records exist to test whether this event is unusual over longer time scales.

More frequent high-pressure systems may also be contributing. When persistent high-pressure “ridges” occur, like the one that planted itself over Russia in 2010 and caused a devastating heat wave, rainfall tends to drop off significantly. That means less water for grass, and skinny animals come winter. Yet the largest livestock die-off from dzud to date—9.7 million animals—occurred the previous year.

That timeline underscores University of Oxford researcher Troy Sternberg’s conviction that drought may not necessarily be a key factor. In one study, he found that drought has only preceded dzud winters three times out of the last 32 events.

“When [reports] on dzud [are linked] to drought, the drought is not quantified, a process that repeats throughout dzud studies,” Sternberg writes. “That other research has not chosen to isolate drought is perhaps not surprising given the predominance that the drought–dzud hypothesis has enjoyed. This is a major research gap.”

Byambasuren thinks higher summer temperatures and drought are strong contributing factors, but he agrees that more research is needed.

“Although both scholarly and popular sources have attributed these droughts to anthropogenic climate change, the instrumental record of moisture is spare and the satellite record short, making it difficult to assess whether 21st-century drying is without precedent,” he says.

While scientists struggle to find the cause of dzud, the herders are racing to develop strategies to keep their livelihoods afloat.

Nomadic herders have traditionally based their winter planning around observations of their environment, Byambasuren says. If marmots and other local rodents go to ground early, then a harsh winter is on the way.

Families could then reduce winter mortality by proactively culling old and weak animals from their flocks, and fatten the remaining herd by moving them to places where grass is more abundant.

In the wake of worsening dzud, some communities have responded by working more collectively. They improve overall quality of life and security by collaboratively culling herds, preparing winter feedstock, and determining pasture rotation schedules to give overgrazed areas a chance to regenerate, among other strategies.

And for those who persist on the steppe, international and faith-based aid groups like Caritas make deliveries of hay, animal blankets, and veterinary supplies. These groups also work to assist the herders in forward planning to prepare for bad winters—although this is a potentially unsustainable strategy if dzud keeps happening year after year.

Photographer Katie Orlinsky, who accompanied Nicholson to Mongolia to document people affected by the 2018 dzud, says the term “climate change” isn’t often on people’s lips. But there’s an awareness that something’s changed and worry about what may be coming.

“The cold has always been there, but the warm hasn’t,” Orlinsky says. “This traditional way of life is facing an uphill battle. It’s devastating.”

Katie Orlinsky shot these pictures while on assignment with the Catholic aid group Caritas.
Please be respectful of copyright. Unauthorized use is prohibited.