Along These Shifting Borders, Life is Full of Unease and Adversity

For people near the borders of these Russian-supported separatist territories in Georgia, uncertainty is a constant struggle.

Photograph by Daro Sulakauri
Read Caption
The village of Nikozi, which rests just south of the South Ossetia border, was heavily bombed during the Russo-Georgian War in 2008. At the time of the conflict, Isaiah, a metropolitan bishop, led a congregation that included people on both sides of the border. He chose to stay in South Ossetia with a portion of his community for three years, until finally returning home to Nikozi.
Photograph by Daro Sulakauri

For people near the borders of these Russian-supported separatist territories in Georgia, uncertainty is a constant struggle.

Fear, thick and unyielding, is a constant for many Georgians living along the shifting borders of South Ossetia and Abkhazia, Russian-supported separatist territories that were once governed by Georgia—and officially still are according to the United States and the majority of the international community. Could this be the day they wake up and find that—overnight, without warning—their home now sits on foreign soil and their money is worthless?

The regions declared their independence in the 1990s and have been under dispute for decades. During the Russo-Georgian War in 2008, Russian forces invaded the territories and have continued to move their administrative borders farther and farther into Georgia. Though the borders are not currently recognized by much of the world, they have real and serious effects on the people living in the area. Their frequent, sometimes daily, changes cause chaos for community members who find themselves, their schools, and their places of business unexpectedly under occupation.

Photographer Daro Sulakauri, who has spent nearly 10 years documenting this volatile region, says it is the “psychological games” imposed on those living on the borderlines that she finds most problematic. As a Georgian child of the nineties, she says tensions with her neighboring country were a pervasive part of her daily life. “You never know how safe you are,” says Sulakauri. “I felt this when I was walking around visiting the [borderline] villages. There is no one around. If you scream out, no one will hear you.” 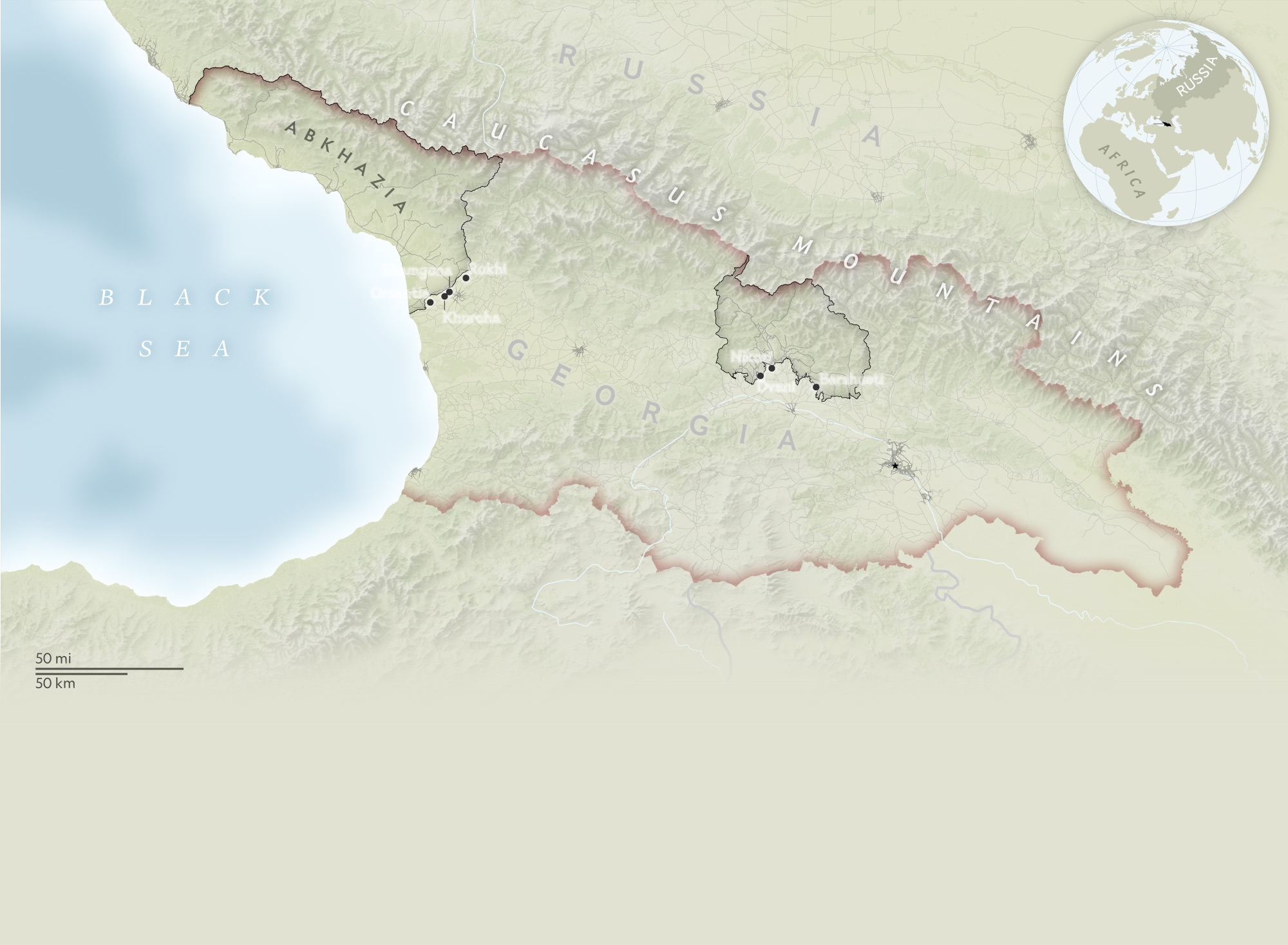 Separatists defeated Georgian troops to gain control of this region in

1993. In spite of years of negotiations and several military clashes, it

remains under the control of Abkhazians. Only a few UN member states

currently recognize this autonomous region as the independent

war between Russian and Georgian forces followed in 2008, leading

Ossetians to declare their independence from Georgia. Very few UN

Fighting between Ossetian separatists and

cease-fire ended the fighting until 2004.

A full-blown war between Russian and

Ossetians to declare their independence

currently recognize South Ossetia as a

control of this region in 1993. In spite of years

of negotiations and several military clashes, it

remains under the control of Abkhazians. Only

this autonomous region as the independent 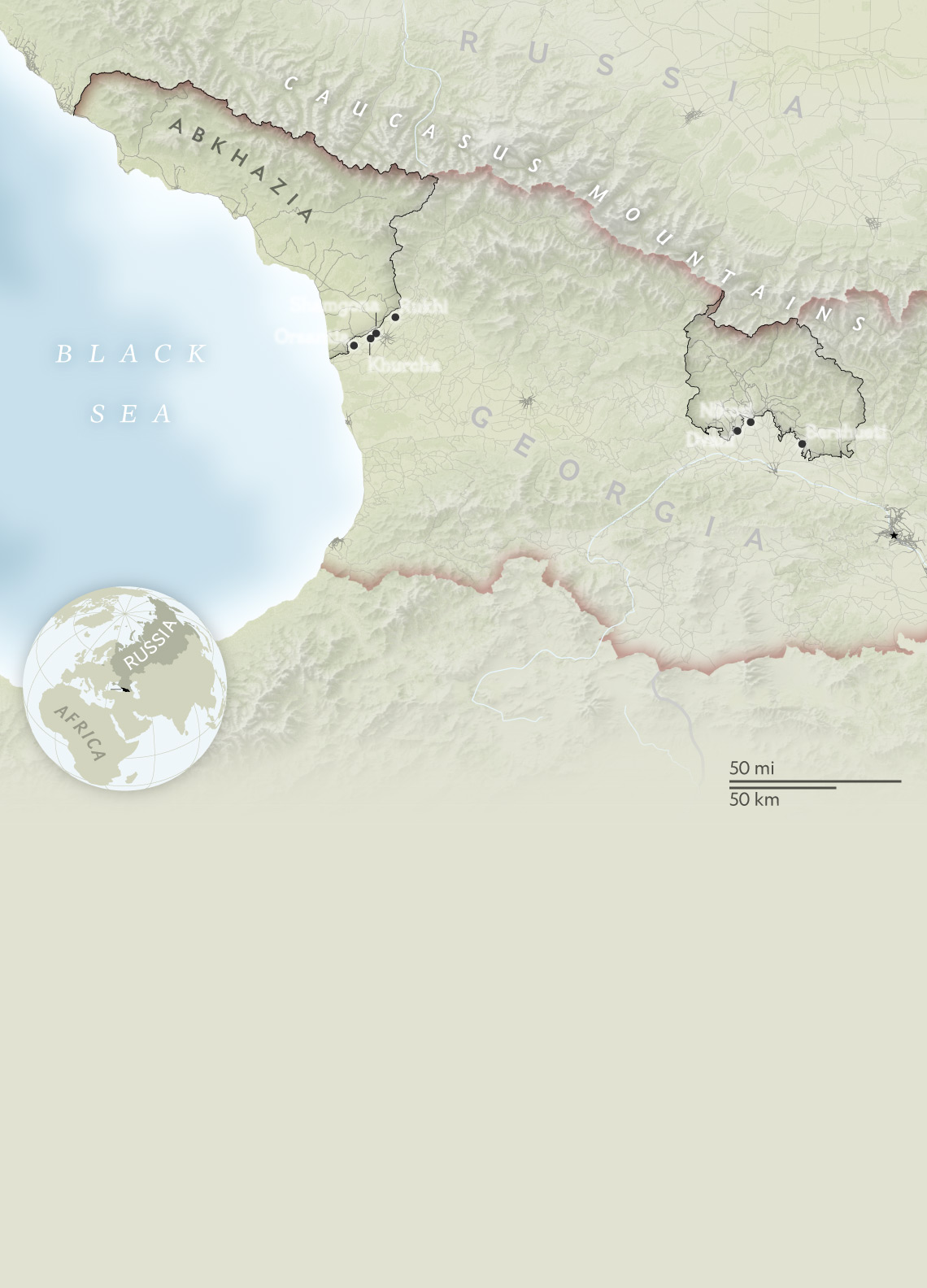 Separatists defeated Georgian troops to gain control of this region in 1993.

In spite of years of negotiations and several military clashes, it remains under

the control of Abkhazians. Only a few UN member states currently recognize

this autonomous region as the independent Republic of Abkhazia.

Fighting between Ossetian separatists and Georgian forces broke out

between Russian and Georgian forces followed in 2008, leading Ossetians

Sometimes the lines are clear; spikes of barbed wire that twist and taunt or concrete slabs that sit squat and indifferent. Many more lines are invisible and constantly mutating, so Georgian villagers out for a walk may suddenly find themselves across a newly moved border—facing fines, arrest, or detention. “There are also a lot of cases where farmers lose cows because they will wander over to occupied territory and never come back,” she adds. “This is a big issue when a lot of their income comes from their cows.”

Loss of livestock is one consequence, others include families being torn apart, loss of education, and crushing poverty. Data Vanishvili, an 84-year-old Georgian who Sulakauri met and photographed through a barbed wire fence, woke up one morning to find his home on the other side of the border and his money worthless. “It’s a really sad situation for him,” she says. “Since he got a pension in Georgian Lari, when he wants to buy bread he would call his neighbors and give them money over the barbed wire fence and then the neighbor would buy the bread and give it back to him. He's trying to survive somehow.”

Resilience and a warm-hearted optimism are these villagers’ lifeline and Sulakauri felt this most keenly among the children. “They're so pure, but they are also grown up because of what they have gone through,” she says. One nine-year-old girl named Nana was forced to change schools because hers was moved beyond the checkpoint in 2017. Nana misses her old friends but finds joy in dancing and would often put on her traditional folk dress and perform for anyone watching. “She has so much deepness in her,” says Sulakauri. “She's such a grown up but such a kid. Her family almost [doesn’t] have money for food and all of a sudden she has this idea to get dressed and dance.”

Daro Sulakauri is a Georgian photojournalist based in Tblisi. See more of her work on her website or by following her on Instagram.