NASA Sets Out to 'Touch the Sun'—Here's How

By boldly going where no spacecraft has gone before, the Parker Solar Probe will attempt to solve big mysteries about our nearest star.

For nearly five billion years, the sun has been ready for its close-up—and NASA is now at last on its way to reach out and brush the face of our home star.

After a few delays, the Parker Solar Probe launched at 3:31 a.m. ET on August 12, riding a ULA Delta IV rocket on a path toward solar orbit. Equipped with four instrument suites, the probe is—of course—solar-powered, and will be drinking in the energy of the star it’s studying over the course of its seven-year journey.

Its mission? To solve some of the stubbornly persistent mysteries about the sun by getting closer than ever before.

A Star Is Born

The sun has powered life on Earth for billions of years, and it has anchored theologies and fueled myths throughout human history. It is inescapable, its presence undeniable except in the rarest of earthly environments.

And yet, we really don’t understand how the sun works.

For more than a century, astronomers have studied this nearest of stars. They’ve stared at it in every wavelength of the electromagnetic spectrum, using Earth- and space-based telescopes that are specially designed to withstand the searing glare of its blazing face. But no matter how hard scientists have tried, they haven’t been able to crack its code.

Perhaps that’s because until now, no telescope has ventured close enough to really study the star at the center of it all.

“We need to get into this action region where all the mysteries are, really,” says project scientist Nicola Fox of the Johns Hopkins Applied Physics Laboratory.

Empire of the Sun

Billowing out from the sun, the solar wind stretches right to the edge of the solar system, accelerating from a relatively lazy breeze near the star to a faster-than-sound barrage of energy and matter that whips through space at millions of miles an hour.

Among the burning questions the mission aims to answer is what accelerates that solar wind, and why it’s so speedy—a phenomenon that will illuminate the inner workings of the star itself, and might even help with nuclear fusion experiments on Earth.

The spacecraft will also be studying the storms that sometimes erupt on the sun’s surface and sling huge blobs of material into space called coronal mass ejections. If these charged clouds slam into Earth, they can produce beautiful auroras—but they are also dangerous for astronauts and can disrupt communications systems and power grids.

“We have technology, we have people in space, and we have got to understand and characterize this place we’re traveling though,” Young says.

Solving these mysteries means that the probe needs to make multiple trips through the sun’s corona, the portion of its upper atmosphere that burns at several million degrees Fahrenheit. That presents yet another solar puzzle: Scientists don’t know why the corona is so unbelievable hot, while the surface of the sun is a comparatively chill 10,000 degrees Fahrenheit.

“Why is the corona 300 times hotter than the surface of the sun?” Fox asks. That’s another question the mission hopes to answer.

Slipping into that sweltering realm is no simple feat, and the Parker Solar Probe will eventually be going faster than any spacecraft ever has. By the time it makes its final solar loop seven years from now, the spacecraft will be speeding over the sun’s surface at 430,000 miles an hour, fast enough to get from San Francisco to Los Angeles in less than three seconds.

Its journey to the heart of the solar system will start with a pass by Venus in October, which will help focus the probe’s orbit toward the sun. And then, “we will encounter Venus another six times during our seven-year mission, allowing us to walk closer and closer into the sun until at our closest approach we are just 3.83 million miles above the sun’s surface,” Fox says.

the heat of the sun

The Parker Solar Probe launched on August 12, 2018. The mission’s trajectory includes seven flybys of the planet Venus, which will decrease the probe’s orbital speed, allowing it to get within four million miles of the sun, about eight times closer than any previous spacecraft. The probe will make 24 orbits of the sun over its seven-year mission.

Measure magnetic field of corona from 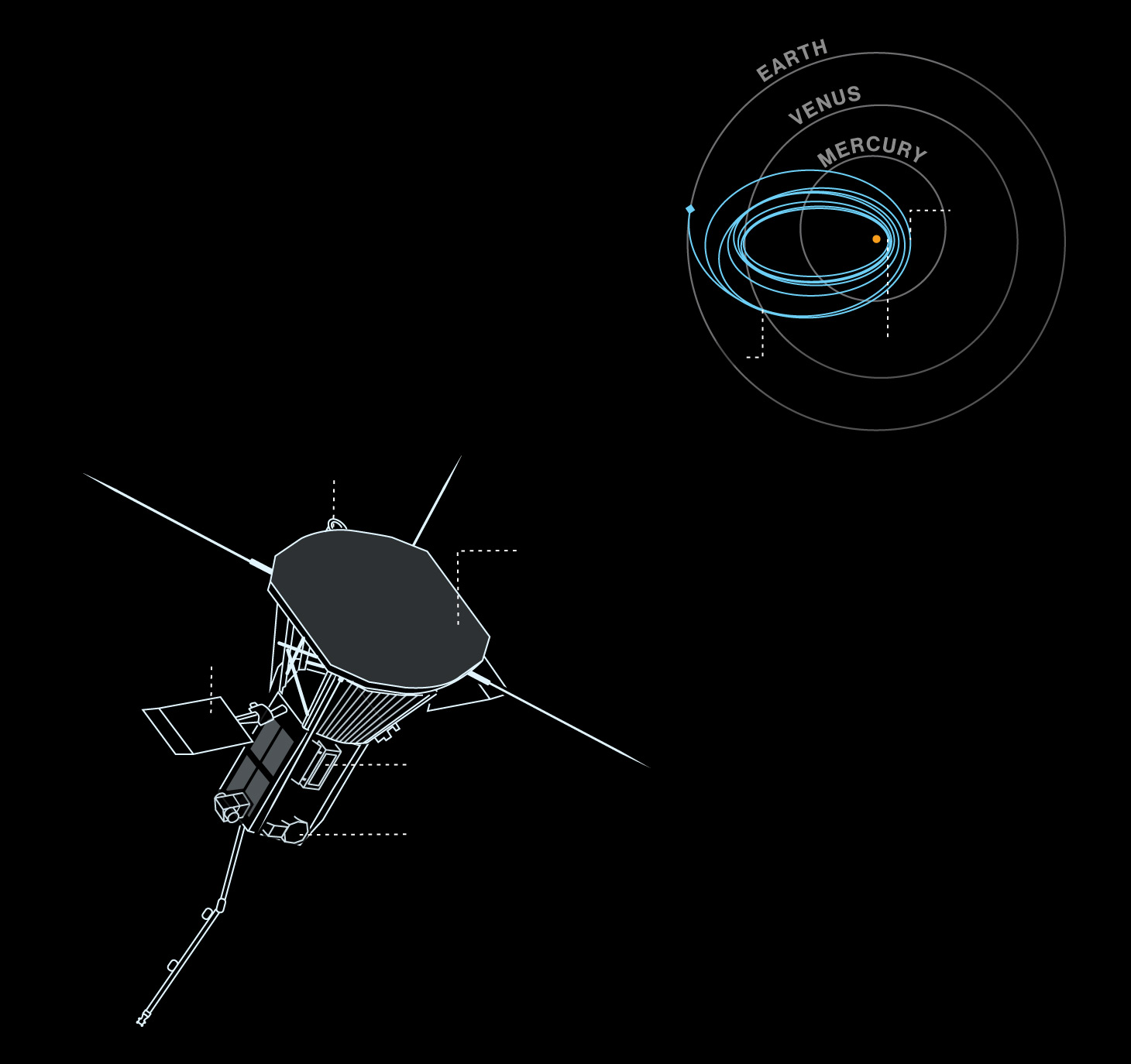 HEAT OF THE SUN

The Parker Solar Probe launched on

seven flybys of the planet Venus, which will

to get within four million miles of the sun,

about eight times closer than any previous

spacecraft.The probe will make 24 orbits of the

sun over its seven-year mission.

Measure magnetic field of corona from various spots on boom.

If you think that sounds like a terrible place to hang out, you’re right. The spacecraft is wearing a special, 4.5-inch-thick heat shield that will protect the four suites of onboard instruments from the sun’s intense heat. Made of carbon composites, the shield is a sandwich-like design that incorporates foam, mesh, and plates of material.

“Most of the instruments sit on the main body of the spacecraft and are well in the shadow provided by the heat shield,” Fox says.

A few of them, however, will be peeking out from behind the 160-pound shield as they collect crucial data about magnetic fields, radiation, particles, and energy.

If all goes well, the mission will last for at least seven years. When it’s time to say goodbye to the Parker Solar Probe, mission managers will let the spacecraft sail into oblivion.

“Once we run out of fuel,” Fox says, “the spacecraft will start to turn, and at that point, parts of the body that are not designed to see the full solar environment will then melt.” And as the spacecraft gets smaller and smaller, its bits and pieces will ultimately become one with the sun.

Editor's Note: This story has been updated to include details of the launch.