Tired of daylight saving time? These places are trying to end it.

It doesn't save energy, and it seems to put health at risk. Now, efforts to stop the twice-yearly time shifts are inching closer to success.

Each year, the approach of spring fills Scott Yates with a familiar sense of dread. The lengthening days and warmer weather are both signals that Yates—along with millions of U.S. residents—will soon be forced over an annual hurdle: shifting the clocks forward at the start of daylight saving time.

The impacts of this change, and the paired “falling back” of the clocks in autumn, run from mild annoyances to potentially severe consequences, including higher risk of heart attacks, fatal car crashes, and harsher judicial sentences. Yet with many business interests siding with the annual observance of daylight saving time—often incorrectly called daylight “savings” time—the pesky time change persists across most of the United States.

“It drives everybody nuts,” says Yates, who is a daylight saving time activist and entrepreneur-in-residence at the nonprofit firm CableLabs. He’s been campaigning for change since 2014, when his wife, Kathy Yates, challenged him to turn his grumbles into action. 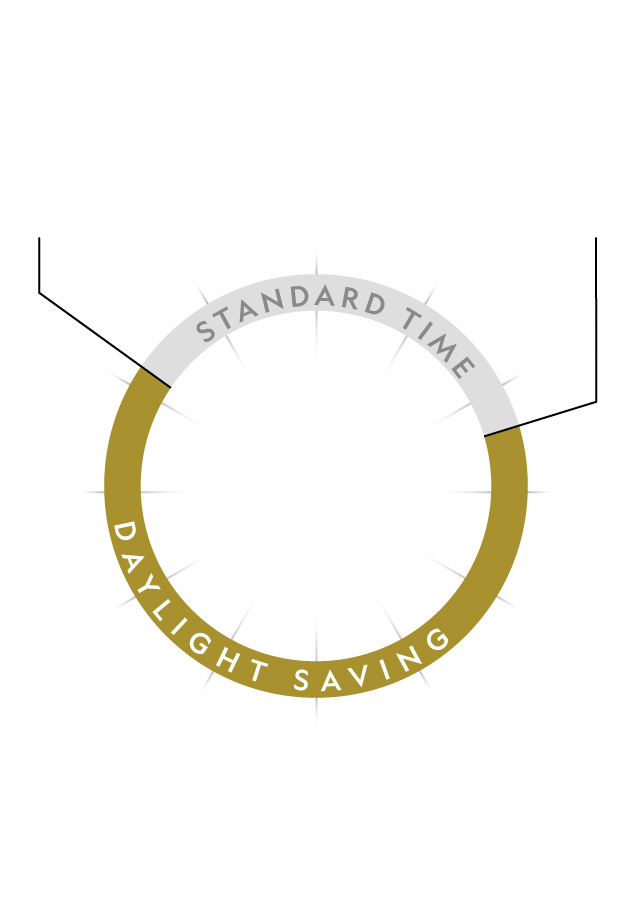 During the short-days of winter, daylight

saving time is not observed.

When daylight saving is in effect, the sun rises

and sets one hour later than it normally would. 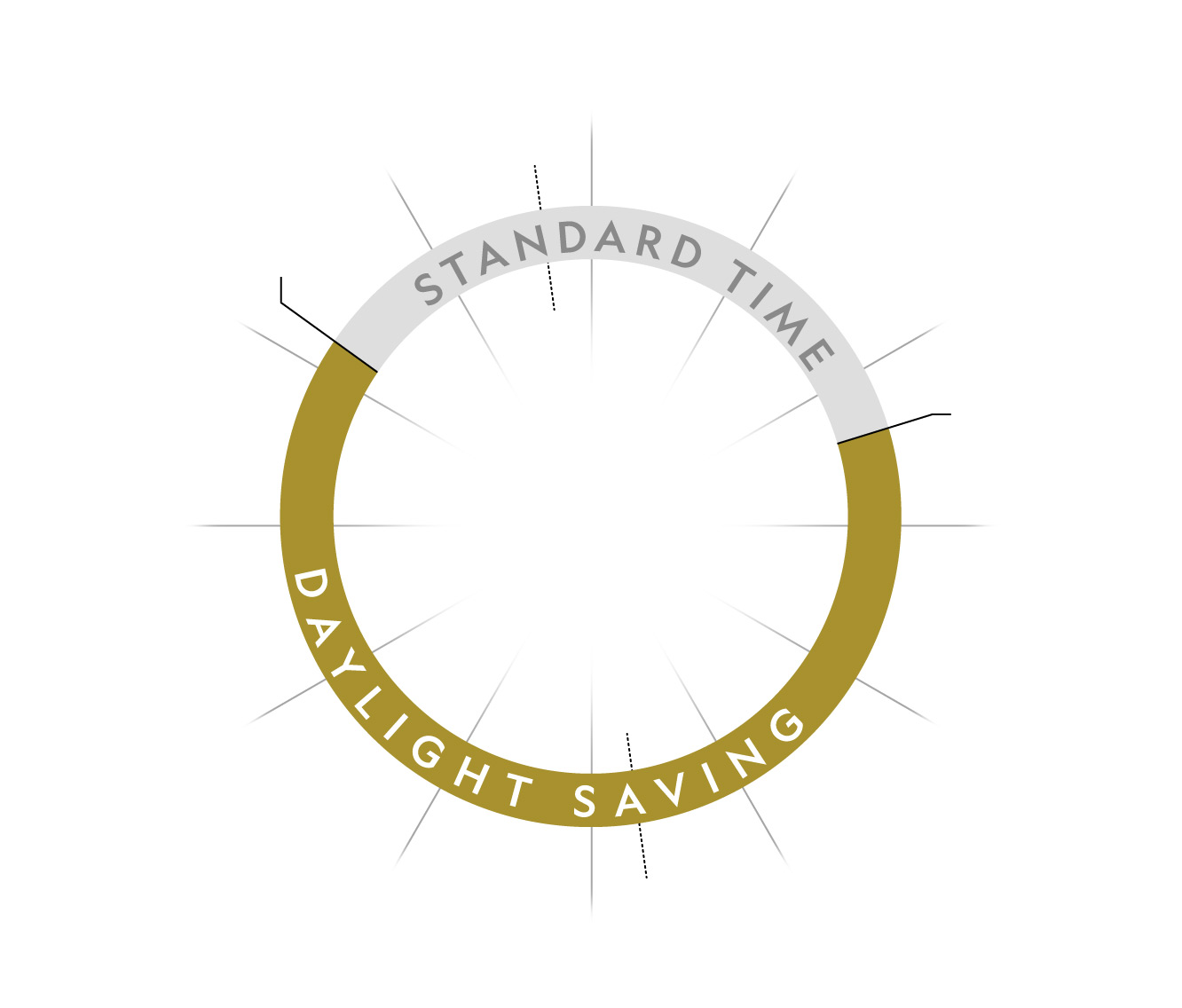 is in effect, the sun rises

and sets one hour later

than it normally would.

For many years, making changes to daylight saving time seemed like a Sisyphean task. But this year, the winds are shifting: More states than ever acknowledge the problems with the regular time changes and are joining forces to try to put a stop to the clock craziness.

“It’s just been a steady stream,” Yates says of this recent work. Each year brings more interest to the cause, and every bill, many of them bi-partisan, seems to get further through the legislature. “It's definitely moving forward.”

Daylight saving time in the U.S. began in 1918 as an attempt to save energy during the throes of World War I, following Germany's earlier shift in 1916. The idea was to maximize sunlight hours during the longer days of the year by taking an hour of morning sun, when many are sleeping, and adding it to the end of the day.

Year-round daylight saving time was implemented during the second world war, initially earning it the moniker “War Time.” When the U.S. was not at war, the states did what they wanted with daylight saving, choosing whether and when to change the clocks. But this patchwork of time zones caused problems; TV stations, transportation agencies, and more nationwide industries raced to keep pace with the shifting clocks.

Thus came the Uniform Time Act of 1966. This did exactly as its name implied and imposed a uniformity of time observance across the country, including setting the beginning and end of daylight saving time. Though later amendments have shifted the exact start and stop dates, it is this act that still regulates the time changes today.

But even when daylight saving was introduced, little was known about its actual energy savings. An increasing number of studies suggest there's not much benefit, especially with the widespread shift to electrical power since the world wars. Then there are the health concerns. For instance, Isaac Fausett, who lives with epilepsy in Grand Island, Nebraska, found that the sleep deprivation following the time shift likely sparked more seizures.

“We know a lot more than we did over 50 years ago, when it became sort of the uniform standard over the United States,” says Julie Fahey, an Oregon State Representative and a regular sponsor of a House bill that currently proposes year-round daylight saving time in Oregon. With more states than ever making moves to end daylight saving time, she says, “the time to talk about it is now.”

The Uniform Time Act allows states to opt out of observing daylight saving time—and remain on standard time—without any federal say so, and some states and U.S. territories have long chosen this option. Today, most of Arizona (except the Navajo Nation), Hawaii, the Northern Mariana Islands, Puerto Rico, Guam, American Samoa, and the U.S. Virgin Islands don't change their clocks.

This year, dozens of states have bills proposing changes to daylight saving, and a scattering of states, including Oklahoma, Texas, and Kansas have bills in progress to opt out of the shift entirely. This option would require the state to stay on standard time year round. But that's often met by opposition, because this would mean the sun would rise and set an hour earlier than citizens are used to for most of the year.

Businesses based on spending time outdoors, like the golf and barbecue industries, are also not fans of the move and have cited increased profits during the extended periods of daylight. Concern for the golf industry was even stressed in a 2017 hearing in Nebraska as a reason the state should not opt out of daylight saving time. 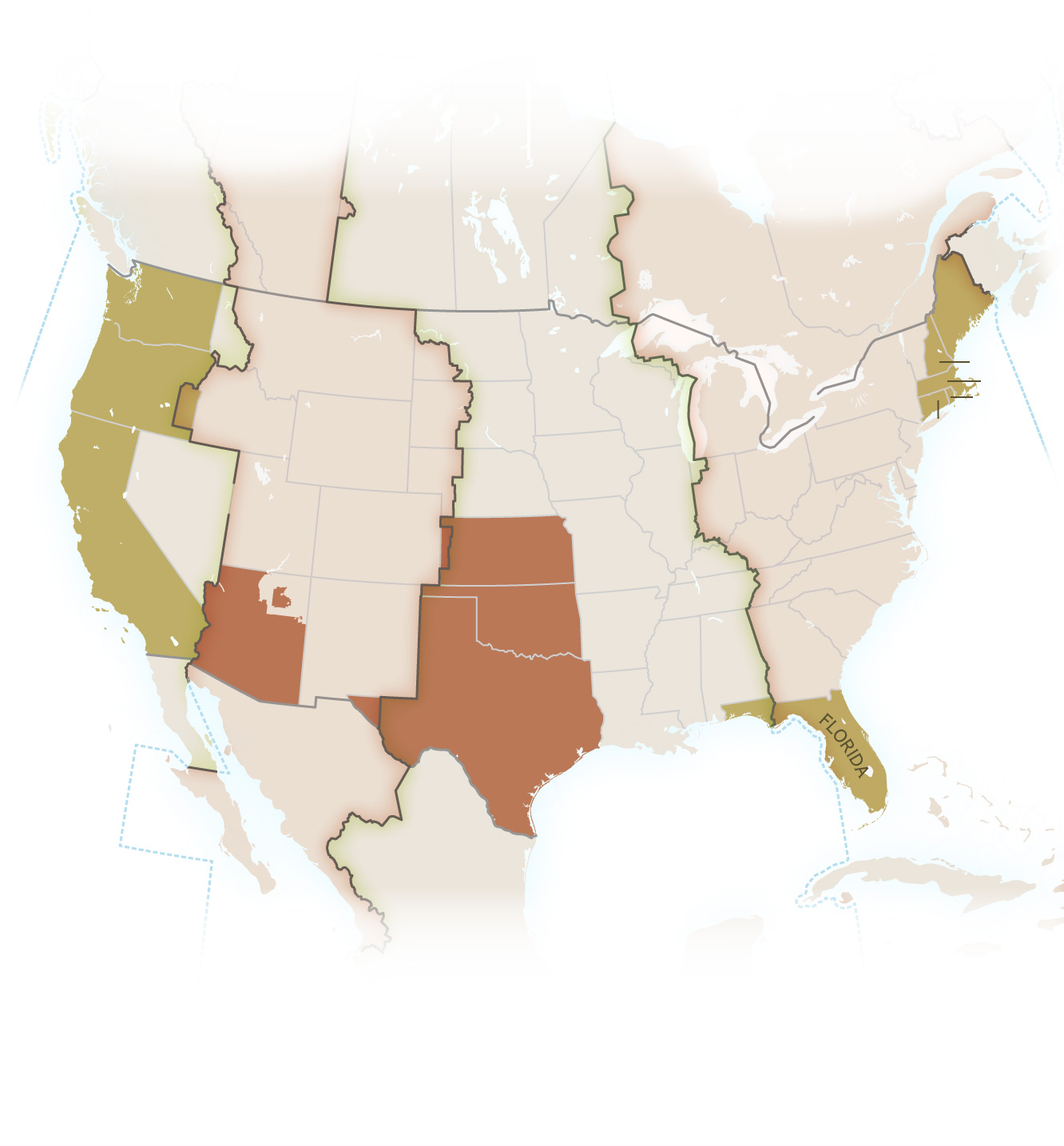 Some states are trying to stay on daylight saving time year- round, including California, Washington, and Oregon.

Several states, like many in New England, hope to shift one time zone east and then remain on standard time, which has the same effect as permanent daylight saving time.

Arizona (except the Navajo Nation) is the only state in the contiguous U.S. that does not observe daylight saving time.

Texas, Oklahoma, and Kansas are among the states trying to observe year-round standard time.

Florida passed a bill to set its clocks on permanent daylight saving time, if the federal government approves.

In many states, people are favoring another option: staying on daylight saving time year round. Some experts suggest this could have positive health impacts—barbecue notwithstanding—since more evening light hours mean more physical activity, such as walks, trips to the park, and participation in sports.

To do so, however, the U.S. Congress would have to amend the Uniform Time Act—a step in the process that is yet to happen.

While it's unclear if Congress will approve of this move, it's what many people want. “It’s all or nothing at this point,” Jonathan Lockwood, a Republican spokesperson in the Oregon capitol, says via email.

Still other states are trying out another route entirely: changing time zones. The contiguous U.S. is currently split into four bands of time—Pacific, Mountain, Central, and Eastern. So, if a state proposes to shift to the time zone directly east and then opts out of daylight saving time, the result is effectively the same as if they had just asked for year-round daylight saving time. Instead of needing a Congressional vote, however, this move could be approved by the Department of Transportation.

This is the solution that many New England states hope to adopt. New Hampshire, Maine, Rhode Island, Massachusetts, and Connecticut all have bills in the works to adopt year-round “Atlantic standard time,” a zone that lies to the east of Eastern standard time, and opt out of daylight saving.

One common concern is that once individual states start fiddling with time, the zoning could become exceedingly complicated. Some neighboring states are trying to combat the issue by proposing similar shifts. A few New England states even have notes in their bills that the change would only be enacted if others nearby join in as well. (Though that also means that if one bill fails, they all fail.)

Even so, the changes may sandwich some states between time zone boundaries and state clusters that are defying the bi-annual clock shifts. And for some parts of the year, adjacent time zones could even be two hours apart, rather than the regular one hour difference. Someone living just over a time boundary could conceivably leave work at 6 p.m., drive for 15 minutes, and arrive home at 8:15 p.m.

Oregon, at least, remains undeterred. Lockwood notes that plenty of chaos is already coming from springing forward and falling back: "The time-change rollercoaster ruins lives—time rules everything we do," he says via email.

Peggy Boquist, wife and legislative assistant for state Senator Brian Boquist, who supports Oregon's bill to lock in daylight saving year round, adds via email: “Changing the time on our clocks twice a year does only one good thing, in my humble opinion: It reminds me to change the batteries in my smoke alarms.”