A successful touchdown would have made Israel the fourth country to pull off a lunar landing. Despite the crash, the mission is still significant.

On April 11, an Israeli lander named after the Hebrew word for “Genesis” attempted to mark a new beginning for space exploration by becoming the first privately funded spacecraft to touch down on the moon. Built by the Israeli nonprofit SpaceIL, the Beresheet lander tried to softly land within Mare Serenitatis, a vast volcanic basin on the moon's northern near side—but as it made its descent, the spacecraft's main engine failed. Engineers reset the spacecraft but lost communications, and the 330-pound lander ultimately crashed.

On April 12, SpaceIL released preliminary data from the last few moments of the mission, which show that despite resetting Beresheet, the spacecraft was descending at more than 300 miles an hour while it was less than 500 feet from touchdown, leading to “the inevitable collision with the lunar surface.” 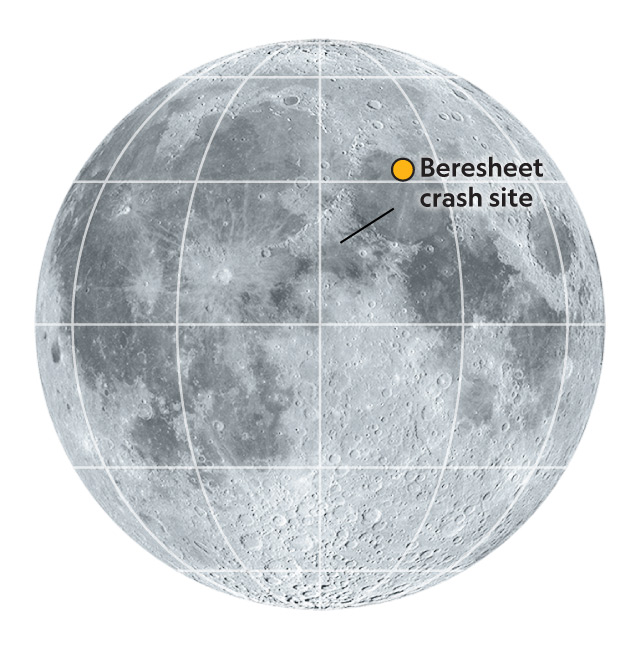 “We didn’t make it, but we definitely tried, and I think the achievement of getting to where we got is pretty tremendous,” Morris Kahn, SpaceIL's primary funder and president, said during a livestream of the attempt. “I think we can be proud ... you win some, you lose some.”

A successful touchdown would have made Israel the fourth country to pull off a soft lunar landing, and SpaceIL would have become the first entity primarily funded by private donors to land a spacecraft on another world. The lander was carrying two scientific instruments and a digital time capsule that included a “lunar library.”

Despite the hard landing, the mission is a milestone: Beresheet is the closest a private entity has come so far to landing on the lunar surface. And on April 4, the spacecraft successfully entered orbit around the moon—making Israel just the seventh country ever to accomplish that feat.

“Compared to not doing the mission at all, it [is] still an advancement, because it proves that they got that far,” says Phil Metzger, a planetary scientist at the University of Central Florida. “You can say they hit the moon, they didn't get hopelessly lost among the stars—that's amazing! That means they did 99 percent of their mission.”

Beresheet's landing attempt now concludes more than eight years of work. SpaceIL got its start in late 2010, when three students—Yariv Bash, Kfir Damari, and Yonatan Winetraub—met one night for drinks at a bar outside of Tel Aviv and convinced themselves they could build a moon-bound spacecraft. They promptly entered the Google Lunar XPrize, a global contest founded in 2007 that pledged $20 million to the first private entity to land a spacecraft on the moon. (Find out more about the Google Lunar XPrize in National Geographic magazine.)

“It’s been quite crazy, I never thought it would be this big,” Bash says. “I've been getting pictures of kids getting dressed up like astronauts—it's really exciting to see how it unfolded.”

Want to know more about the mission, its origins, and its significance? We've got you covered.

From the clouds to the moon

Initially, the SpaceIL team dreamed of landing a spacecraft on the moon by the end of 2012, with a lander weighing no more than a few pounds. But when briefed on the nonprofit's plans, the Israel Space Agency and Israel Aerospace Industries (IAI), the country's primary defense contractor, cautioned SpaceIL that its plans were only half-baked.

“Most of them thought we were a joke for the first few years,” Bash says.

Instead of turning their backs on the fledgling group, however, Israel's more experienced space entities chipped in. IAI agreed to build the spacecraft, and the Israel Space Agency agreed to provide technical support and $2 million. In the meantime, SpaceIL raised the vast majority of its $90 to $100-million budget from private donations. Much of the funding came from SpaceIL's Kahn, an Israeli-South African software entrepreneur, and the Adelson Family Foundation, a U.S.-based nonprofit founded by casino magnate Sheldon Adelson.

SpaceIL ended up becoming one of the Google Lunar XPrize's finalists, and in 2015, it became the first competitor to book its flight to space. “That was really fun to see: to see a business being built around this, in space, in Israel, inspiring the public and the next generation of kids,” says Chanda Gonzales-Mowrer, a vice president at the XPrize Foundation and the former director of the Google Lunar XPrize.

But like many of the prize's competitors, SpaceIL confronted budget shortfalls and technical delays. After extending the deadline several times, Google and the XPrize Foundation ended the Lunar XPrize in March 2018 without crowning a winner.

Despite the contest's end, SpaceIL persevered. On February 22, 2019, the spacecraft launched aboard a SpaceX Falcon 9 rocket, riding alongside an Indonesian communications satellite. SpaceIL hitched a ride with the help of Spaceflight Industries, which brokered the nonprofit's piggybacking. In the weeks since launch, Beresheet traveled more than four million miles, completing a series of three widening orbits around Earth that took it ever closer to the moon.

“This is a paradigm shift that's kind of hard to appreciate ... This is the first privately funded, voluntarily funded lunar mission, and it's the first mission that's really kind of doing something different,” says Ryan Olcott, the Spaceflight Industries mission manager who worked with SpaceIL.

Even with the Lunar XPrize off the table, the nonprofit will receive another recognition: a $1-million “Moonshot Award” from the XPrize Foundation to celebrate former competitor's perseverance. In a statement posted on Twitter, XPrize founder Peter Diamandis confirmed that this award would be given to SpaceIL despite the crash.

“It goes back to being proud of all the work that SpaceIL has done,” says Gonzales-Mowrer on creating the Moonshot Award. “We want to celebrate the achievements, and the fact that they're daring to dream.”

Now that SpaceIL has made its landing attempt, the organization is set to “self destruct”; the nonprofit's existence had been centered on Beresheet alone. Bash says that the group will decide on its long-term plans in the coming weeks. In the meantime, IAI has teamed up with the German firm OHB to offer the European Space Agency rides for its moon-bound instruments.

While SpaceIL is the first private entity to get this far with a moon landing, it certainly won't be the last, and those that follow will have a far more commercial bent. As interest grows in moving industry—maybe even people—off world, many new companies, including some former Lunar XPrize competitors, are angling to become the pillars of a new lunar economy.

“It's ridiculously hard, but it's getting more reasonable to aspire to,” says Bob Richards, CEO of Moon Express, a former finalist in the Google Lunar XPrize. “It'll be transformational. I see the democratization of access to the moon and deep space happening now, in the same way that CubeSats have democratized access to low-Earth orbit.”

NASA is helping fan the industry's flames, just as it did when it offered contracts to private companies to send supplies, and eventually astronauts, to the International Space Station. In April 2018, it announced the Commercial Lunar Payload Services program, offering contracts to private companies to take NASA scientific instruments to the moon. In November 2018, NASA approved nine bidders, including former Lunar XPrize competitors Moon Express and Astrobotic, to compete for the agency's contracts. Barbara Cohen, a planetary scientist at the NASA Goddard Space Flight Center, says that the program will provide a welcome return to the lunar surface for U.S. science after a four-decade absence.

“Orbital measurements are awesome, we're really happy with our orbital campaign, not just with LRO [the Lunar Reconnaissance Orbiter] but with GRAIL and LADEE and ARTEMIS, and a whole suite of spacecraft—but we have a lot of unanswered questions that we need lunar access to address,” she says.

In the coming months, India is expected to launch its Chandrayaan-2 spacecraft, which aims to be the first ever to land near the moon's south pole. And on the heels of Chang'e-4, the first spacecraft to land successfully on the moon's far side, China is making plans for its Chang'e-5 mission, which, if successful, would be the first mission since Apollo 17 to return samples from the lunar surface. At the same time, the Trump Administration is trying to rally support for a 2024 human mission to the moon, even as other space agencies sketch out plans for their own crewed lunar missions.

“Nations are seeing space as an area in which national prowess can be demonstrated,” says Joanne Gabrynowicz, an emerita professor at the University of Mississippi and an expert on space law.

As space becomes more international, will the cosmos become a free-for-all? Going back to the 1960s, spacefaring nations signed onto a series of treaties, such as the Outer Space Treaty of 1967, that set some ground rules, such as banning nuclear weapons. Language in the treaty says that countries are responsible for the space activities of their companies and citizens—but the specifics of such supervision are left to each country to implement.

Still, amid all the questions raised by this latest leap for the future of spaceflight, Bash is simply reflecting on how the group he founded made history—and nearly touched down on our close cosmic companion.

“It's one of those once-in-a-lifetime adventures,” he says.

This story has been updated to reflect that SpaceIL will receive the XPrize Moonshot Award, and to add information about the lander's speed right before the crash.