Trees that traveled to space now live on Earth. Here's where to find them.

Grown from hundreds of seeds that went to the moon on Apollo 14, the arboreal oddities were almost lost to history.

A moon tree stands tall, illuminated from behind by artificial lights, at NASA's Goddard Space Flight Center in Greenbelt, Maryland. Planted in 1977, the sycamore (Platanus occidentalis) grew from a seed that orbited the moon during the Apollo 14 mission in 1971.

Grown from hundreds of seeds that went to the moon on Apollo 14, the arboreal oddities were almost lost to history.

Since 1977, a stately sycamore has greeted visitors to NASA’s Goddard Space Flight Center. It looks like any other sycamore, one tree among many on the quiet, leafy campus in suburban Maryland.

But what many passersby may not realize as they stand under its dappled shade or admire its changing foliage is that this tree came from the moon.

The Goddard sycamore is one of the dozens of so-called “moon trees” scattered around the country, grown from seeds that traveled with astronaut Stuart Roosa on the Apollo 14 mission in 1971. Roosa was the command module pilot, which means that he remained in lunar orbit while commander Alan Shephard and lunar module pilot Edgar Mitchell visited the surface of the moon. During that time, Roosa had hundreds of seeds tucked inside his personal kit.

Part scientific experiment, part public relations venture, the seeds represented a joint project between the U.S. Forest Service and NASA. Roosa had been a smoke jumper with the Forest Service before becoming an astronaut, and bringing the seeds to space helped raise awareness of the federal agency, while also giving NASA scientists an opportunity to probe an important question: How does being in microgravity affect plants?

After splashdown, the seeds went into quarantine along with the crew. Standard protocol at the time, quarantine was meant to prevent any potentially harmful moon microbes from spreading to Earth. There was a brief moment of panic when the canister holding the seeds burst open inside a vacuum chamber, but the seeds survived the disturbance, and most of them went on to germinate normally.

Apollo 14 astronaut Stuart Roosa brought hundreds of tree seeds with him to space in 1971. Many of the seeds were later germinated and planted across the United States—and then largely forgotten. Two decades later, NASA planetary scientist Dave Williams got a tip from an elementary school teacher that sent him on a mission to catalog as many of the moon trees as possible.

Infested with pine beetles, this moon tree is not in good condition. But a community effort is under way to save it.

In 1976 a moon tree was planted at the birthplace of American author and activist Helen Keller.

Brought to NASA’s attention by a school teacher in 1996, this tree’s rededication plaque reads “Long live our beautiful moon tree.”

This moon tree was planted near a tulip poplar whose roots go back to George Washington and his Mount Vernon estate.

THERE ARE NO MOON TREES LISTED IN ALASKA OR HAWAII. 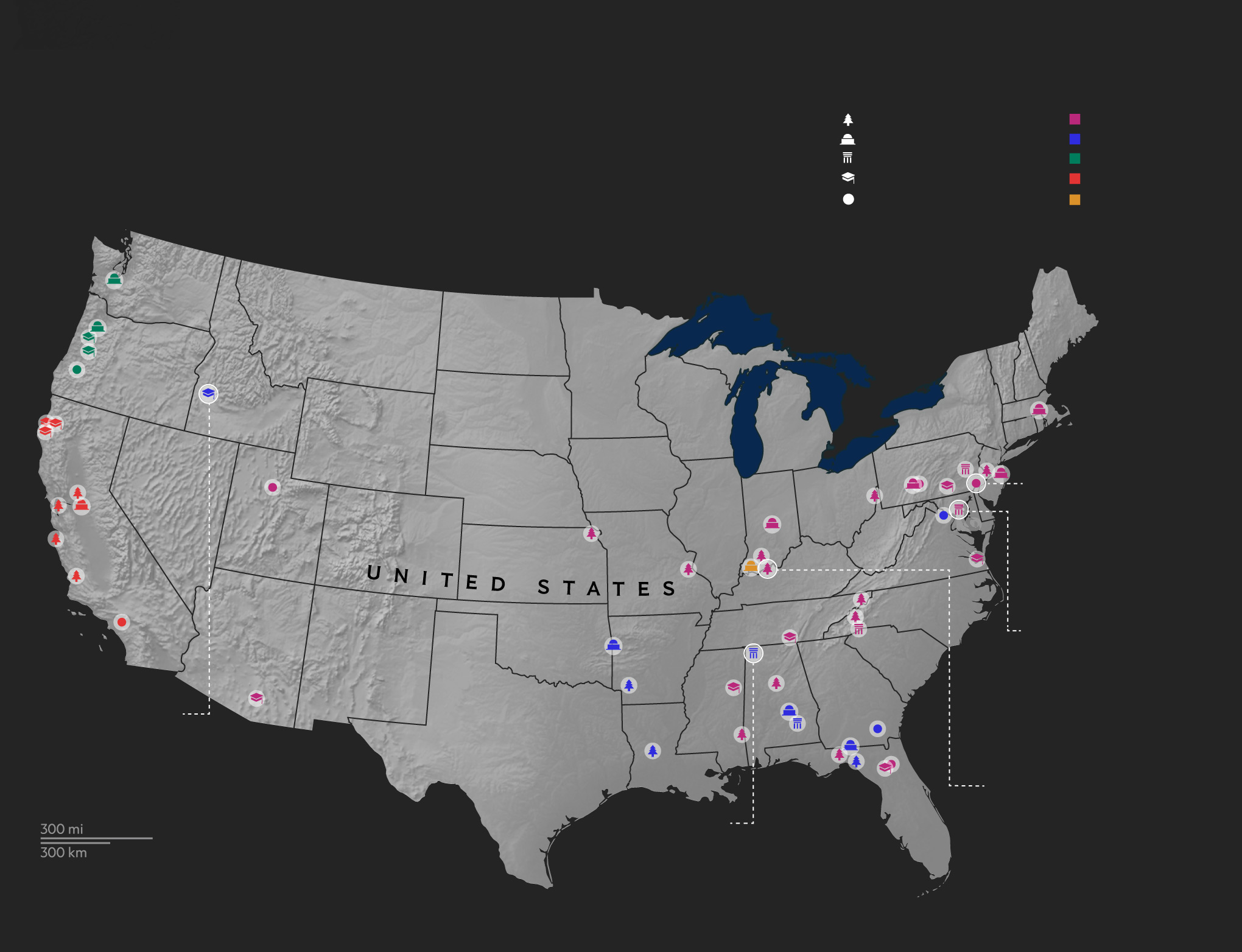 Apollo 14 astronaut Stuart Roosa brought hundreds of tree seeds with him to space in 1971. Many of the seeds were later germinated and planted across the United States—and then largely forgotten. Two decades later, NASA planetary scientist Dave Williams got a tip from an elementary school teacher that sent him on a mission to catalog as many of the moon trees as possible.

This moon tree was planted near a tulip poplar whose roots go back to George Washington and his Mount Vernon estate.

Infested with pine beetles, this moon tree is not in good condition. But a community effort is under way to save it.

Brought to NASA’s attention by a schoolteacher in 1996, this tree’s rededication plaque reads “Long live our beautiful moon tree.”

In 1976 a moon tree was planted at the birthplace of American author and activist Helen Keller.

THERE ARE NO MOON TREES LISTED IN ALASKA OR HAWAII.

Over the next few years, the saplings were planted across the United States, many of them during 1976 as part of the U.S. bicentennial celebrations. Perhaps overshadowed by that historic anniversary, the tree plantings received relatively little national attention, and aside from some local fanfare, they largely faded into the background.

Then, about 20 years later, Dave Williams got an email. A planetary scientist at Goddard, Williams had been tasked with archiving lunar and planetary data on the agency’s website, which, like many other websites in the 1990s, was in its infancy.

Meanwhile, a third-grade teacher from Indiana named Joan Goble had been perusing the site in search of information on a curious tree she’d found. When she saw Williams’ name, which was listed with the data he’d been cataloging online, she decided to email him. Goble explained that a class project on local trees had led her and her students to a girl scout camp near their school. There was a tree there, Goble wrote, and it had a little wooden sign on it marked “moon tree.” She asked Williams if he could elaborate on the curious moniker, and tell her if other moon trees existed.

“I said I’ve never heard of these at all!” says Williams, who was so delighted by the query that he took on tracking down the meaning of moon trees as a personal project. “I asked around at Goddard—there’s certainly a lot of old timers there who worked on the Apollo program,” he says. “I asked everyone, and no one had heard of [moon trees].”

Williams poked around online and asked NASA’s history office for help—a search that yielded the locations of roughly half a dozen other moon trees, and some old news clippings that mentioned the Apollo 14 moon trees. He also came across a 1976 telegram from President Gerald Ford that was sent to various bicentennial moon tree planting ceremonies, part of which read: “I send warm greetings to those who attend this unique ceremony dedicating a small tree which was taken from earth to the moon on January 31, 1971 aboard Apollo 14. This tree which was carried by Astronauts Stuart Roosa, Alan Shepard and Edgar Mitchell on their mission to the moon, is a living symbol of our spectacular human and scientific achievements.”

Williams shared what he learned with Goble, and then had an idea.

“I was thinking this is such a cool story,” he says, so he built a page on the NASA archive site where readers could learn about the Apollo moon trees. He also invited people to help him in his search. “At the bottom I said, If you happen to know of a moon tree near you—because there were no records kept of where they were planted—send me an email and let me know,” he says. “And I started getting emails!”

Williams’ moon tree page is still going strong, with a current tally of 80 verified trees. Some entries, like a loblolly pine planted at the White House, are marked with an asterisk to note that the tree has died. Others, like a Douglas fir that successfully sprouted at the State Capitol Building in Salem, Oregon, include a link to extensive information about the tree and its location.

Beyond showing that many of the seeds seemed to grow just fine back on Earth, the moon trees were never formally studied, so they don’t provide much insight on the botanical effects of a jaunt around the moon. Fortunately, NASA didn’t stop at saplings.

For instance, at Kennedy Space Center in Florida, researchers are actively experimenting with crops being grown on the International Space Station.

But the rewards are sweet, or, in this case, spicy. Since 2015, astronauts have been free to eat what they grow, Massa says, and right now on the ISS they’re enjoying mizuna mustard, a leafy green that has a peppery bite.

“They get to eat half of it,” Massa says, “and the rest comes back for science.”

One of the things Massa and her team study is food safety. In the closed environment of a spacecraft, the ecosystem consists of humans, plants, and microorganisms, and managing that balance is key. Massa also studies plants’ chemical and nutritional profiles, and whether future crop-growing on Mars could include making use of the red planet’s own dirt and minerals. (See how scientists in Antactica are advancing research on plant growth in space.)

Another potential key to farming beyond Earth involves capitalizing on a process called evapotranspiration.

“That means that the water they’re taking up is evaporated out of their leaves as kind of ultrapure water vapor,” Massa says. “That’s something we can collect and reuse, so we can think of plants as this really integral component of the future life-support system. Especially in the long term, when we’re trying to begin independence from Earth.”

Of course, it may be quite a while yet before humans—and trees—are thriving on Mars. But in the meantime, aspiring astronauts can visit a moon tree and perhaps feel a little bit closer to that grand off-world adventure.