Mysterious waves have been pulsing across Oklahoma

A buzz that rocked the state all summer sent geologists on a labyrinthine chase—and unearthed new mysteries about how energy moves through land and air.

It all started when a wave swept across Oklahoma on June 24, just before 11:11 a.m. local time. It buzzed one seismometer after another, seeming to ping-pong hundreds of miles across the state. This wave didn’t just breeze by—it pulsed like a geologic heartbeat for about 10 minutes.

“Well, that’s odd,” geophysicist Jake Walter at the Oklahoma Geological Survey remembers thinking. He had spotted the regular pulse as it scrolled across a big flat screen TV in the OGS seismic lab. At first he thought it might be a glitch in the monitoring devices, but when that happens, the signal is usually limited to a single instrument. That morning’s buzz, as he later found out, rattled 52 stations across the state.

Andrew Thiel, an OGS analyst tasked with investigating the event, traced similar signals back to at least March. Through the summer, the waves swept across the state with increasing frequency, intensity, and spread, sometimes sticking around for more than 20 minutes. But they always happened in the morning, and never on a Sunday.

After a labyrinthine chase, the team has now discovered at least part of the answer: The strange signals originate from the McAlester Army Ammunition Plant. But even with a source in hand, the case is far from closed. Scientists are still digging for clues to how the waves traveled so far, and why they changed over time.

A strange signal swept across Oklahoma’s seismometers (instruments detecting ground motion) in the summer of 2019. Unlike the burst and taper of natural and human-induced earthquakes, the signals pulsed at 20-second intervals. Researchers at the Oklahoma Geological Survey

dubbed it “The Anomaly.”

The mystery signal grew in intensity

and spread over the summer.

into its possible human origins:

It was never observed on a Sunday.

detecting the signal on a given day

By examining the direction the signals moved across the state, OGS tracked down its origin: demolition blasts from McAlester Army Ammunition Plant.

July 13, one day of observations 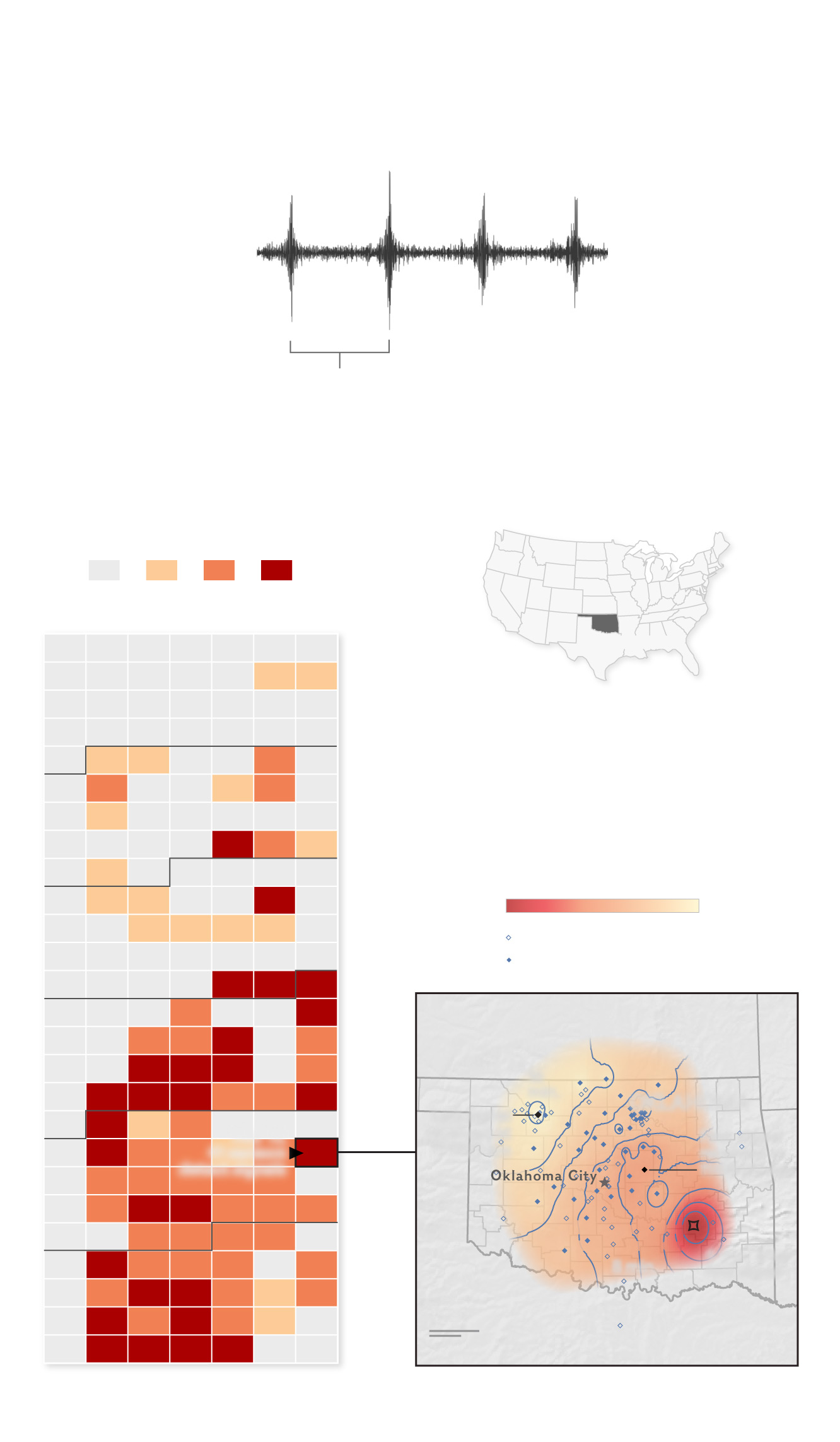 ground motion) in the summer of 2019. Unlike the burst and taper of natural and

human-induced earthquakes, the signals pulsed at 20-second intervals. Researchers at

the Oklahoma Geological Survey dubbed it “The Anomaly.”

The mystery signal grew in intensity and spread over the summer.

A curious consistency clued researchers into its possible human origins:

it was never observed on a Sunday.

detecting the signal on a given day

By examining the direction the signals

moved across the state, OGS tracked down

its origin: demolition blasts from

July 13, one day of observations

Studying these events is useful to science, says Carmichael, who is part of a group that develops physical and mathematical tools for monitoring nuclear activity abroad. For one, pinning down the source of each odd signal that ripples by can help researchers more easily discern the ordinary from the extraordinary.

“There is often ‘noise’ detected at stations, which could be a truck driving by or a cow walking past a sensor (no joke),” Thiel notes in an email. Figuring out which signals come from what kinds of sources—whether Buick or bovine—can help build a baseline for identifying curious natural phenomena or even global security threats, such as the distant boom of a nuclear bomb test.

“It’s always worth digging in and not immediately dismissing something that doesn’t look exactly like an earthquake,” adds Elizabeth Cochran, a seismologist with the U.S. Geological Survey.

Normal earthquakes are the result of slowly building stresses in Earth’s crust and upper mantle, created by the slow-motion march of tectonic plates. More commonly in Oklahoma, quakes come from the injection of waste fluids from oil and gas operations deep underground.

Eventually, the stresses hit a breaking point, forcing the surface to suddenly shift, and that sends out a spate of seismic waves. As the energy travels outward, it splits into a distinct series of wave types: First, there are the high-frequency body waves that move in bunches like a compressed slinky or in side-to-side wobbles. Rippling along behind them are low-frequency surface waves, some of which can send solid ground rolling like an ocean.

In the case of the strange signal, the body waves were conspicuously absent. The signal also pulsed unnaturally, arriving in short pops usually separated by 20 seconds, with some intensities as strong as a magnitude 2.2 temblor.

“We dubbed this acoustic pattern ‘The Anomaly,’” Thiel wrote in a blog post detailing the event.

Thiel and his colleagues spent more than a month investigating with few breaks in the case. All the while, the signal became more frequent, spreading over a wider swath of the state.

The waves—and their oddity—didn’t pass unnoticed by the public. Several people called the Oklahoma Corporation Commission, which manages the state’s public utilities, to report odd noises described as mini-explosions or thumps. One caller said it was reminiscent of a quarry blast.

“Some of the residents were able to specify, I can tell this feels different, it sounds different than some of the earthquakes that we’ve felt,” says commission spokesperson Sarah Terry-Cobo. Investigators headed out to one resident’s house to listen in, but the source of the curious noises eluded them.

“It has been very perplexing to us to try to wrap our heads around it,” Terry-Cobo says.

The heart of the beat

Eventually, Carmichael and the OGS researchers started zeroing in on a culprit. The signal appeared to generally sweep from the southeast, where the McAlester Army Ammunition Plant sits. There, explosions are a part of daily life, rattling windows and kicking up plumes of dirt into the air.

Confirmation of this hunch finally arrived on August 16, when Thiel got in contact with Gideon Rogers, a spokesperson from the plant. The plant disposes of old ammunition each morning around 11 a.m., except on Sundays, in explosions separated by 20-second pauses.

A request for additional details about their activities is still pending. But Carmichael suspects that the ammunition is being split into a small groups that are detonated sequentially, to avoid shocking nearby populations with a single large blast. That would send out pulses of energy that can account for the unusual geologic heartbeat across the state.

Some of the confusing ping-pong effect might because the scientists were too zoomed in when looking for patterns, like examining the individual dots in a pointillist painting. Realizing the source was McAlester—which is located farther to the southeast than the vast majority of the detectors—helped them take a step back and see the whole picture.

“It was just seeing data in a different way than we’re used to,” Thiel says.

By land or by air

But how the energy from presumably small blasts wound up traveling statewide has left researchers debating.

Speed estimates suggest that the signals swept across Oklahoma much slower than energy usually moves through the ground—during an earthquake, for instance, surface waves usually bop along at about 2,200 miles an hour or more. But Oklahoma’s waves weren’t exactly going slow, either, sweeping across the state at sometimes supersonic speeds of nearly 900 miles an hour.

One possibility is that the seismometers are picking up sound waves. Sound can travel stunningly far, says Boise State University’s Jeffrey Johnson, an expert in the use of infrasound to study volcanoes. However, it doesn’t necessarily zip straight to seismometers.

Explosions in particular send out a smattering of acoustic waves at different frequencies, the lowest of which, known as infrasound, travels the farthest. Infrasound can jettison up into the atmosphere, where the air grows steadily cold and then warm again. These layers of heat can bend the waves back toward the ground in concentric zones like a bullseye.

Such sounds could be shaking the ground—similar to a deep bass riff shaking your car window—or even rattling the solar panels above the instruments. These are extremely sensitive detectors, Thiel explains via email: “We even try to install stations away from trees, where the leaves and branches might sway in the wind, producing movement in the tree's roots, which could contribute noise to the sensor.”

According to Johnson, who reviewed OGS’ analysis of the event on National Geographic’s request, "this is definitely acoustic waves.”

But Carmichael spotted something that suggests sound might not be the only phenomena at work. The motion of the rollicking pulses logged by many of the seismometers points to a surface wave radiating through the ground. While rare, a slow surface wave is not impossible, he says, and perhaps in just the right atmospheric and geologic conditions, such a wave could sweep far and wide.

“Nature is conspiring to make the signals travel in such a way that we can’t tell whether they’re acoustic or seismic,” he says.

Studies of near-surface explosions, such as a 2006 attack on a U.S. military base in Iraq, reveal energy traveling out in a tangle of ways. Some of this energy travels along the interface between land and sky in a pair of waves—one through the shallow subsurface and another in the air just above the ground.

Such a pairing could allow the waves to feed off one another, “smearing out” the energy, Carmichael says, and forcing the duo to travel at an intermediate speed—one that’s slow for a surface wave but fast for an air wave. Acoustic waves returning from the sky likely complicate the situation, as they can couple with the ground and boost any potential waves passing through.

Johnson agrees such a wave is possible. Thiel and Walter, however, remain skeptical.

“I could be wrong,” Carmichael concedes. “But the cool thing about science is when you’re wrong, you always learn something new.”

Together, he and the OGS team hope to find more answers as they dig through the enormous data bank, examining how local atmosphere and other natural phenomena could influence the observed trends. Hopefully, with more information from the ammunition plant, they can pin down more answers.

For his part, Carmichael is excited to dig deeper: “I love studying weird, mysterious signals. It’s exciting. It kind of pulls the Scooby-Doo out of me.”