Unlike refusing a straw at a restaurant, it’s difficult to cut down on plastic while strapped unconscious to an operating table. Single-use plastic is facing more scrutiny than it ever has, and the medical industry could be the area where individual consumers have the least say.

Practice Greenhealth, a non-profit that works to make hospitals more sustainable, estimates that 25 percent of the waste generated by a hospital is plastic. A study on a single hysterectomy found that the procedure can produce up to 20 pounds of waste, most of which is plastic.

Single-use plastic can be an attractive option for hospitals—cheap, durable, and easily tossed out—and each new fresh plastic container or covering offers a newly sterile environment. That’s why clinicians cover themselves and everything they use in plastic.

Yet for all the ways plastic has revolutionized the medical industry over the past century, it’s now being scrutinized for what happens after it’s done its job. Plastic can easily end up in marine environments, where it breaks down into tiny particles called microplastics that have yet-to-be-determined health consequences. And the fossil fuels required to produce those plastics can contaminate air and water.

Increasingly, say medical care providers, the unfettered use of plastic is conflicting with a doctor’s promise to do no harm, but in facilities awash in blood and pathogens, is avoiding plastic even possible?

“Plastics for biomedical applications have many desirable properties, including low cost, ease of processing, and [ability] to be sterilized easily,” says Bridgette Budhlall, an engineer at the University of Massachusetts Lowell.

She notes that plastics can even be modified with coatings that make them particularly resistant to microbes.

A fact sheet published by the American Chemistry Council, a plastic trade group, says: “Single-use plastics are the cleanest, most efficient way,” to facilitate health and hygiene in hospitals.

But those working to make hospitals more sustainable say plastics have been overused.

In a survey of 332 hospitals that has not yet been published, Practice Greenhealth looked at common single-use plastic items in operating rooms that had been successfully replaced by reusable items. Tools like surgical basins and sterilization wraps could be reused and would reduce waste by several tons per year. Depending on where they cut back, hospitals could also save thousands of dollars a year, Practice Greenhealth says.

“It worked for a while when China took it,” says Janet Howard, the director of engagement at Practice Greenhealth, of medical plastic waste. But now, she says of hospital recycling efforts, “We’re going backwards.”

In 2018, China announced it would no longer buy two-thirds of the world’s waste. That's leaving facilities little choice but to toss their commingled plastic waste into landfills or incinerators. PVC that ends up in incinerators can release toxic chemicals.

“There are still certainly different types of plastics that could be recovered that aren’t being recovered today for a number of reasons,” says Kim Holmes, the vice president of sustainability at the Plastics Industry Association.

“There are items used in patient care that don’t come in contact with patients so they’re not biohazards, and those could be recycled,” she adds, referencing things like packaging and storage containers.

In hospitals that do attempt to sort their plastic for recycling, Holmes says producing enough material to be attractive to a recycler is a challenge for any one single hospital and more effective when trash is aggregated from a number of locations. The Healthcare Plastics Recycling Council offers a toolkit for hospitals looking for a recycling network to join.

One of the most common plastic items thrown out of operating rooms is “blue wrap,” a sheet of polypropylene that covers sterilized tools that is removed and discarded before surgeries.

Its single-use nature removes what Howard called the ick factor, but it also leaves a small mountain of trash behind.

“It’s like after a holiday when you have that pile of wrapping paper on the floor,” she says. “That’s blue wrap in the operating room every day.”

Some hospitals, she says, are experimenting with replacing the blue wrap with reusable sterilization containers that can be made clean just like the instruments they contain.

It was a desire to ensure their tools were free of pathogens that led two sibling dentists, David and James Stoddard, to create a pouch of tightly woven fabric to house their sterilized dentist tools. Their company, EnviroPouch, was created in 1993 and purchased by Barbara Knight in 2001.

The Centers for Disease Control outlines strict standards for sanitizing medical instruments, and the pouches that contain them must be registered with the Federal Drug Administration, which EnviroPouch is.

Knight says the product she sells is more effective than plastic pouches because it forms a thicker barrier around sharp tools. Each pouch eliminates roughly 200 single-use plastic pouches, she says.

“The fabric weave makes it a very torturous path for a sharp [a medical term for any instrument with a sharp edge] to penetrate,” she says, as opposed to the film in a plastic pouch.

Knight says the dentists who created the pouch were inspired by the story of Kimberly Ann Bergalis, a woman who died in 1991 after being one of six American patients infected with HIV at the dentist.

The same concern over spreading HIV is what Gary Cohen, president of both Practice Greenhealth and non-profit Health Care Without Harm, credits with a large industry-wide push for single-use packaging.

“It was one of the drivers that helped to fuel the use of single-use devices and excessive packaging in the healthcare sector because there was such deep concern of the spread,” says Cohen of paranoia during the AIDS crisis. “It was an overreaction.”

In addition to its abundance, Cohen points out that certain types of plastics like polyvinyl chloride (PVC) can contain toxic chemicals themselves. One 2016 study found that young patients exposed to a common PVC additive called DEHP—a type of phthalate—during intensive care showed signs of neurocognitive decline later in life.

On their website, the Plastics Industry Association maintains that PVC is an effective material because it’s germ resistant and easy to sanitize.

In 1931 the Baxter Travenol Company marketed the first IV solutions in glass bottles. Plastic bottles were introduced in the late 1940s, and the first flexible plastic IV bag was released in 1970. The IV bag allowed for closed transfusions, reducing the risk of contamination.

The U.S. uses around 20 million IV saline bags a month.

IV bags that contained regular saline or electrolyte solution can be recycled.

U.S. health-care facilities generate about 14,000 tons of waste per day; up to 25 percent is plastic. 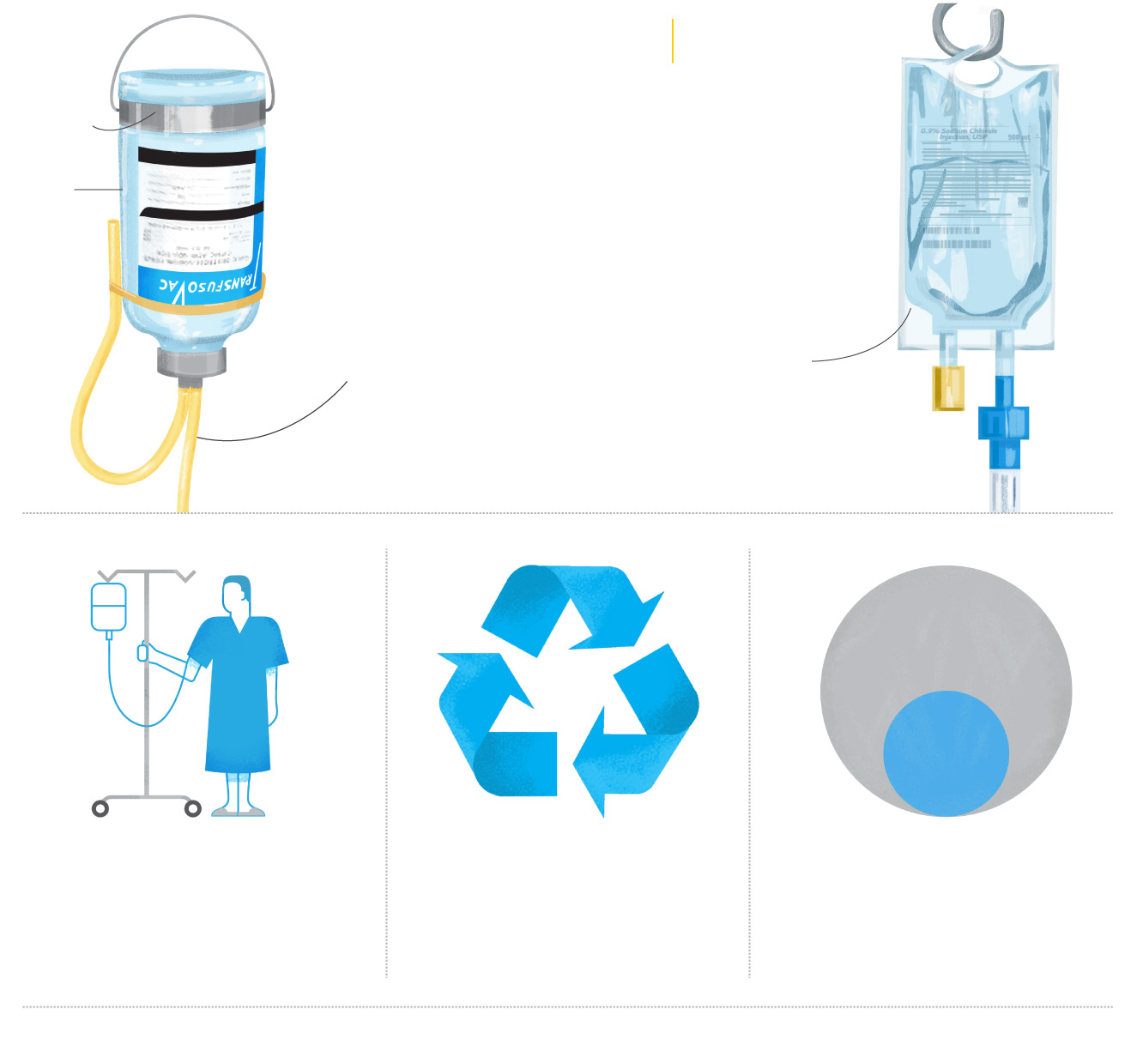 In 1931 the Baxter Travenol Company marketed the first IV solutions in glass bottles. Plastic bottles were introduced in the late 1940s, and the first flexible plastic IV bag was released in 1970. The IV bag allowed for closed transfusions, reducing the risk of contamination.

The U.S. uses around 20 million IV saline bags a month.

IV bags that contained regular saline or electrolyte solution can be recycled.

U.S. health-care facilities generate about 14,000 tons of waste per day; up to 25 percent is plastic.

The environmental non-profit Health Care Without Harm estimates that the world’s healthcare industry contributes just over four percent of the world’s emissions, much of that from round-the-clock heating and cooling. That’s the same level of emissions produced by more than five coal-fired power plants in a year.

While many hospitals are implementing sustainability offices, they won’t ever truly be “zero-waste” says Howard, because “there will always be some sort of biohazard component” that needs to be mitigated.

But she says to be better environmental stewards, hospitals and medical care facilities will need to reduce their plastic waste. Unlike carbon emissions, plastic trash is glaringly noticeable, and it’s something patients and doctors alike want to reduce.

“We’re looking at this in a big picture. ‘What is wellness and how do we get there?’" she asks rhetorically. “We need to eat healthy foods and go back to nature, and it brings us back to hospitals as healers.”

Not polluters, she adds.