Wildfires have spread dramatically—and some forests may not recover

An explosion in the frequency and extent of wildfires worldwide is hindering recovery even in ecosystems that rely on natural blazes to survive.

Pungent and damp, the so-called tall, wet forests of southeastern Australia are home to the tallest flowering plants on Earth. Eucalyptus regnans, the Latin name of the mountain ash, means “ruler of the gum trees”—which is fitting, given these giants can reach more than 300 feet high.

Many of Australia’s gum trees, particularly those in drier forest types, are famously able to tolerate fire, throwing out new buds and shoots within weeks of being engulfed in flames. But even these tenacious species have their limits.

Old-growth forests of the mountain ash and a related species, the alpine ash, are among the gum trees that are less tolerant of intense blazes. In the state of Victoria, these trees had already been severely depleted by logging and land clearing. Now, the bushfires that have burned more than 26 million acres of eastern Australia in recent months are putting the forests at even greater risk. 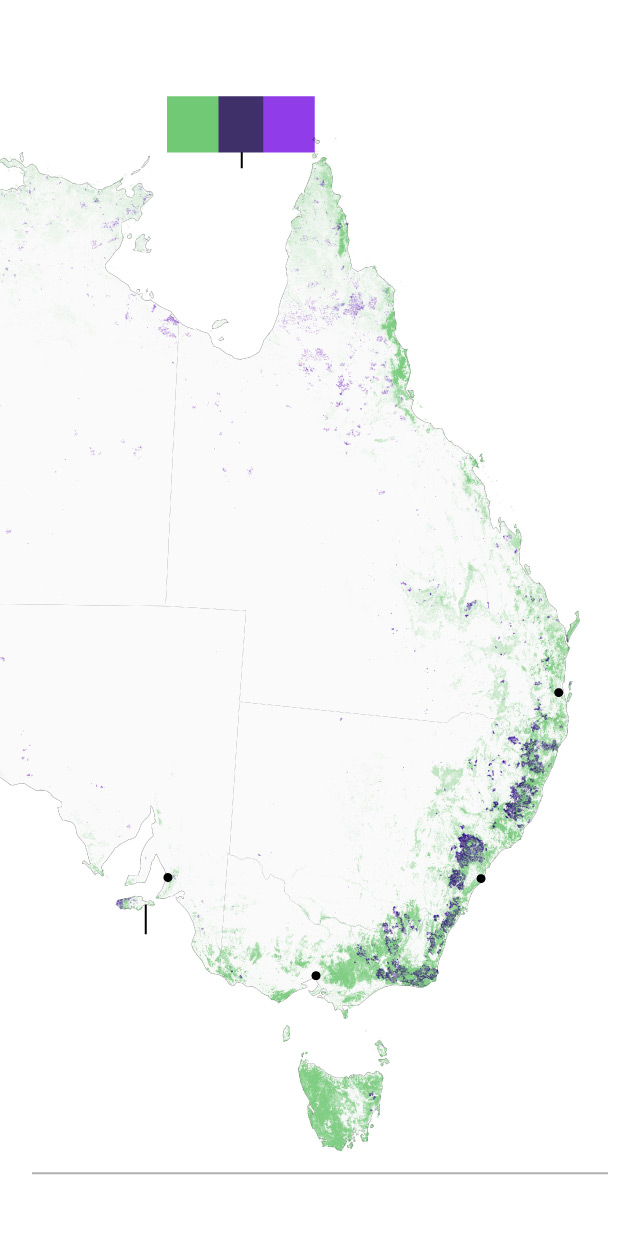 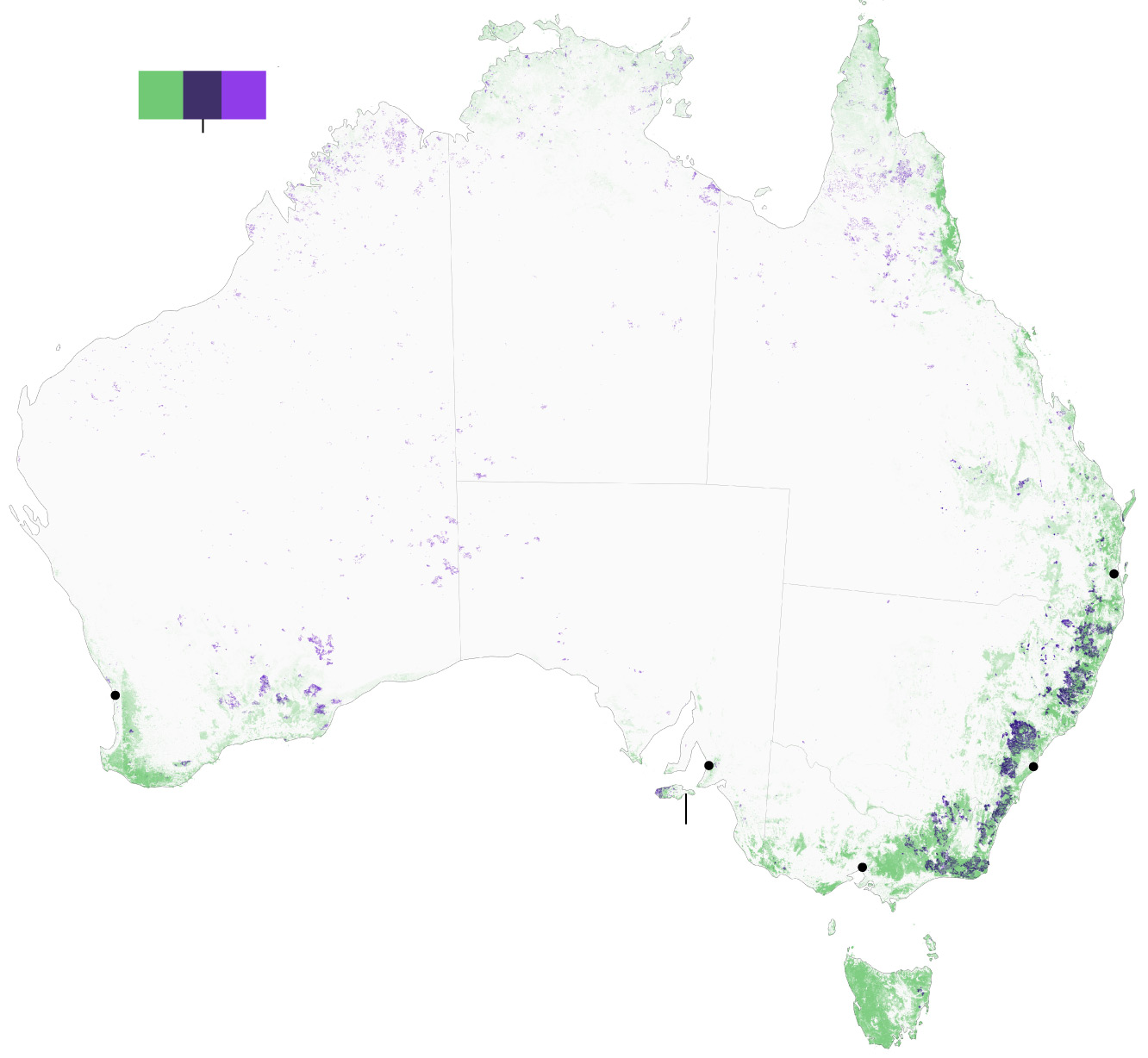 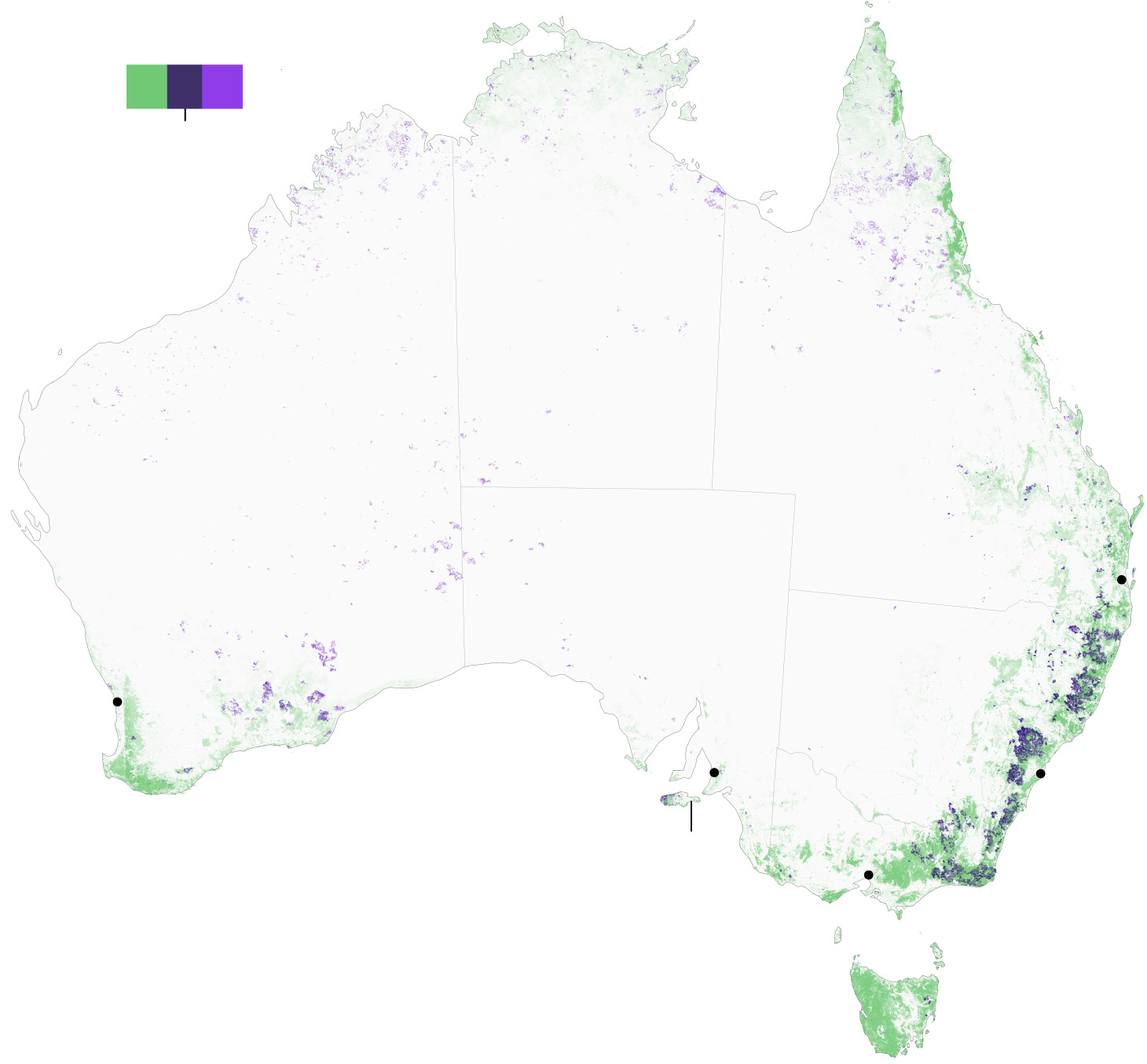 Some of the forests razed this year have experienced four bushfires in the past 25 years, meaning they’ve had no chance to recover, says David Lindenmayer, an ecologist at the Australian National University in Canberra.

“They should be burning no more than every 75 to 125 years, so that’s just an extraordinary change to fire regimes,” he says. “Mountain ash need to be about 15 to 30 years old before they can produce viable amounts of seed to replace themselves following fire.”

The loss of these dominant trees is a significant problem, since they provide vital habitat for threatened animal species such as the sooty owl, the giant burrowing frog, and a fluffy arboreal marsupial called the greater glider. (Also find out how Australia’s fires can create big problems for freshwater supplies.)

As the world warms with climate change, the situation in Australia reflects what’s happening in forests globally—from California and Canada to Brazil and Borneo. Even forests made up of species that thrive on cycles of fire and regrowth are losing resilience in the face of wildfires that are escalating in frequency, severity, and extent. According to research published earlier this month, climate change is significantly increasing the risk of wildfires by stimulating hot and dry conditions and high-risk weather. Over the past 40 years, the length of fire seasons has increased by 20 percent across more than a quarter of the world’s vegetated land surface.

California, for instance, suffered its worst ever wildfires in 2018. Record blazes also struck other places with arid Mediterranean-type ecosystems, such as Greece and Portugal. Tropical rainforests are being hit, too, with recent satellite data showing an 11-year high in Amazon deforestation, much of it through deliberately set fires for land clearing. Even boreal forests and tundra are igniting—fires consumed many millions of acres of Alaska and Siberia in 2019. (Here’s what Portugal’s wildfires may teach us about how to live with mega-fires.)

One of the things changing globally is that the air is getting warmer, Allen says. As air warms, it holds more water, drawing moisture out of the environment, drying soils, and stressing trees. This makes ecosystems more flammable and trees more likely to be attacked by insects, which increases the number of dead trees, further exacerbating fire risk.

“Warming temperatures are making fuel more available and lengthening fire seasons,” he says. “The fire season in western North America is two to three months longer than 30 years ago.”

The number of years with severe wildfires is also increasing, says Camille Stevens-Rumann, a scientist at Colorado State University in Fort Collins who studies how ecosystems respond to disturbance.

“Whereas before, maybe you had one a decade, or even less frequently, now, we’re seeing these large, bad fires at least every other year,” she says.

Last year was Australia’s driest and hottest in 120 years of record taking. An unprecedented drought left forests tinder dry and poised to ignite in fires that started in September and peaked in late December, burning great swathes of Queensland, New South Wales, and Victoria.

“The places burned will bear the marks of this year for centuries,” says Joe Fontaine, a fire ecologist at Murdoch University in Perth, Western Australia. “Drier forests, which burn more readily, will likely replace wet forests in many places.”

Similarly, increasingly frequent and intense fires in North America are acting like a filter, slowly pushing out dominant vegetation, Allen says. For more than a century, forest management has largely suppressed fires in the region’s Ponderosa pine forests, resulting in a huge increase in tree density. But extreme weather is making fires harder to suppress, and when they do blaze, they are so intense they are killing “mother trees,” which are vital for reseeding the next generation following fire.

“Ponderosa pine forests are perfectly suited to high-frequency, low-intensity forest fires, burning in grass and pine needles in the understory,” he says. “But if severe fires get into the canopy of the trees, the pines don’t tolerate that and die as mature individuals, which don’t regenerate.”

Ponderosa pine seeds rarely disperse further than about 500 feet, so when trees die, they’re leaving huge gaps. In some mountainous forests of western North America, Allen says, “we’re getting a wholesale conversion from dominant conifer forests—spruces, firs, and pines—to areas with a larger proportion of grasses and shrubs.”

Where forests can’t fully recover from fire, the animal species that rely on those ecosystems will face increasing challenges. Part of the problem is that species struggling through frequent fire events are often already stressed by other climate-related impacts, such as drought, heatwaves, and pest infestations. Whether so-called stacked disturbances are further compounding recovery is “a crucial and massively important question” to answer, Fontaine says.

His team has been studying a fire-tolerant shrub, Banksia hookeriana, from Western Australia which holds its seeds in a woody cone that only opens after fire. They’ve found that since the 1980s, climate change has caused a 50-percent reduction in the number of seeds it produces. Combine increasing fire intensity with climate change, and the shrub is facing a Sisyphean fate.

“Numbers like this take climate change from theoretical to a slap in the face,” Fontaine says.

This pattern spells bad news for many North American animal species that prefer old-growth forests, such as the spotted owl and the Canada lynx, says Stevens-Rumann. Australia’s current bushfires have so far burned more than 80 percent of the habitat of about 50 threatened species. The entire ranges of some have been obliterated, such as the Kangaroo Island dunnart, a shrew-sized marsupial carnivore, and the mountain trachymene, a fire-sensitive herb.

Losing these individual plants and animals from the landscape means we may also be losing important interactions between species, which could have unforeseen impacts on ecosystem function and their ability to recover from fire.

In Portugal, wildflowers appeared to burst back to life abundantly after fires, but a study published last year found that species of moths that are vital for pollinating them were transporting just a fifth of the pollen they were carrying in unburnt areas, spelling trouble for regeneration further down the line.

However, not all species will dwindle as wildfires increase. More than a century of fire suppression in North America had led to a decline in the black-backed woodpecker, which is camouflaged to blend in against burned trees. An increase in fires is now seeing it bounce back, Stevens-Rumann says.

In Australia, many predators—such as monitor lizards, some birds of prey, and introduced cats and foxes—actively seek out fire scars to hunt survivors that are left exposed in landscapes devoid of cover. Other animals that thrive in post-fire landscapes include the fire chaser beetles in the genus Melanophila, which lay their eggs in freshly burnt wood, where their larvae develop. Even species that are relatively common can benefit following fire, Stevens-Rumann adds.

“If you open up that forest and there are abundant shrubs and grasses … we tend to see a resurgence of things like deer and elk.”

While bigger, hotter wildfires are becoming an increasingly common reality, experts agree that the situation isn’t entirely hopeless. We need to be more ambitious, creative, and adventurous in our approach to conservation in a world where environmental disasters are more pervasive, says Woinarski.

“It's a major challenge and … we won't have all of the solutions in the short term.”

Post-fire seeding, for example, happens often in North America but is rare in Australia. Lindenmayer says that dropping mountain ash seeds from helicopters may be something they consider in the future. Planting forests with non-native, fire-resistant vegetation is a more radical idea. And better land management is another part of the solution.

“There’s this great Finnish proverb that says, Fire is a good servant, but a bad master,” notes Stevens-Rumann, alluding to the fact that humans can use fire effectively as a tool as long as it stays under our control. (Here’s how California is turning to natural solutions to manage wildfires.)

For tens of thousands of years, Aboriginal people in Australia effectively prevented large blazes by reducing fuel, such as dry grasses and leaf litter, with frequent, small, hand-set burns. Now there are increasing calls for a return to that kind of traditional burning.

“We suppress 98 percent of fires that start in the U.S., meaning that it’s only those 2 percent that make the news or are large,” says Stevens-Rumann. “But if we use more of that 98 percent to actually help clear high fuel loads, and create a more mosaic landscape, we have the potential to stop the spread of those large extreme fires.”

Nevertheless, the climate change trajectory we are on will mean an unavoidable increase in droughts, heatwaves, and other drivers of fire. Several decades from now, 2019 may be regarded as normal year, or even a relatively cool and wet year, Allen says.

“It’s a really foreboding future that has crept up on us very quickly,” Woinarski adds. “We’re witnessing the beginning of the deterioration of many of our most loved ecological systems. That's a tragedy for us, but a worse tragedy for our descendants.”