A chunk of Yellowstone the size of Chicago has been pulsing. Why?

An injection of magma under Norris Geyser Basin may be why the region is five inches higher today than it was 20 years ago.

In northwestern Wyoming, in the center of Yellowstone National Park, a bubbling caldera is the scar of a 640,000-year-old, gargantuan volcanic eruption. The 3,472-square-mile park encompassing the caldera is filled with geologic wonderlands of sprouting geysers and effervescing pools, all ultimately driven by magma and superheated fluids churning in the rock below the surface.

One of these areas, Norris Geyser Basin to the northwest of the caldera, contains more than 500 hydrothermal features. These tempestuous geysers and pools often change from day to day, but a much larger transformation has been taking place as well: For more than two decades, an area larger than Chicago centered near the basin has been inflating and deflating by several inches in erratic bursts. In a hyperactive volcanic region like Yellowstone, the exact causes of any specific movement are difficult to pin down. But a recent study in the Journal of Geophysical Research: Solid Earth may help explain why this pocket of land has been breathing in and out.

“In all likelihood, Norris has been a center of deformation for a very long time,” says Daniel Dzurisin, a research geologist at the U.S. Geological Survey’s Cascades Volcano Observatory and one of the co-authors of the new research.

Scientists used decades of satellite-based radar and GPS data of Norris Geyser Basin to model what may have occurred below its surface based on the changes above. In the late 1990s, a body of magma intruded beneath Norris, and fluids trapped within the magma bubbled out and made their way through the rocky labyrinth above them. As the fluids got stuck and pressure built up, the ground would rise, and when the fluids were able to escape elsewhere, the ground deflated. Today, magma-derived fluids could sit close to the surface, just a mile or so below the ground.

To be clear, the new research does not indicate that the supervolcano that created Yellowstone’s caldera—which last erupted 640,000 years ago—is any more likely to erupt now. Instead, these geologic movements may help explain why the park’s Steamboat Geyser, the world’s tallest active geyser, has been erupting at a record-breaking pace since March 2018. Researchers also speculate that the changes below Norris may mean a slightly increased chance of hydrothermal explosions taking place in the basin. (Get a peek inside Yellowstone's supervolcano.)

The geology of Yellowstone is complex and elusive, and investigations of the subsurface are particularly challenging. But researchers agree that the injection of a large body of magma and the fluids that escaped during the event are plausible explanations for the rising and falling ground.

“We’re only just beginning to understand just how dynamic [Norris Geyser Basin] is,” says Michael Poland, the scientist-in-charge at the U.S. Geological Survey’s Yellowstone Volcano Observatory who wasn’t involved in the new research.

Norris Geyser Basin is Yellowstone’s oldest thermal area, with evidence of thermal features going back 115,000 years. It’s also the hottest, registering 459 degrees Fahrenheit a thousand feet or so beneath the surface. 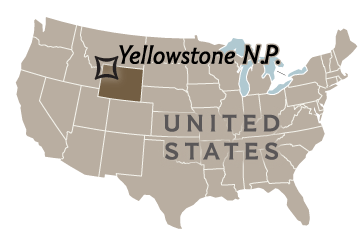 The region’s Steamboat Geyser exemplifies how drastically and unexpectedly this scalding patch of Yellowstone can change. The 400-foot-tall geyser has historically erupted infrequently, with gaps between major eruptions lasting between four days and half a century. But since March 2018, Steamboat has erupted as frequently as once a week. Its 32 eruptions in 2018 set a record that was broken the next year, when the geyser erupted 48 times.

“The blinking thing went nuts!” says Helen Robinson, a geothermal expert at Glasgow University who was not involved with the new work.

Although the hyperactivity of this mercurial geyser has captured the public’s attention, scientists are more interested in the dramatic quavering of the basin itself. Between 1996 and 2004, an 18-mile-long area rose 4.7 inches, only to sink back 2.8 inches between 2005 to 2013. Then the region suddenly shot up again at a rate of 5.9 inches a year between late 2013 and early 2014, the highest pace of uplift ever observed within Yellowstone National Park.

In March 2014, a magnitude 4.9 earthquake rocked Norris Geyser Basin, bring the seemingly unstoppable uplift to a sudden halt. The ground gradually fluctuated between sinking and rising until early 2019, when it began to subside—but the basin is now around five inches higher than it was in 2000.

Radar and GPS data from satellites were used to track the deformation of Norris Geyser Basin, and geologists suspect that the upheaval began when magma rose just shy of nine miles beneath the surface between 1996 and 2001. The basin, just outside the northwestern rim of the supervolcano’s youngest caldera, sits on a line of faults and vents known as the Norris-Mammoth corridor.

“Two weak zones intersecting one another—that would be a place where magma might find an easier way to intrude,” Dzurisin says.

The magmatic intrusion was responsible for the 1996 to 2004 uplift event, and as the magma cooled, fluids dissolved within it were able to bubble out. This process lowered the internal pressure of the magma body, causing it to deflate like a leaky balloon, which likely caused the ground to lower again between 2005 until 2013.

The escaping fluid has become repeatedly trapped in pockets beneath layers of rock, causing the ground to rise in fits and starts ever since. This cycle of magmatism and hydrothermal activity has proven elusive for scientists to identify and chronicle. The new model is “a reasonable hypothesis, but it’s by no means certain,” Poland says. Perhaps sources of fluids other than the body of magma, such as heavy snows in recent years, collect in pockets and sporadically escape elsewhere as the landscape inhales and exhales, Robinson says.

Geysers and possible explosions on the surface

The team suspects that magma-derived fluids are now sitting just beneath the surface of Norris Geyser Basin. Hydrothermal explosion craters dating back thousands of years can be found all over the region, caused by geologic pressure cookers of confined, scorching water that violently depressurize and flash-boil into steam if the rock cracks, an event that is all-but-impossible to forecast.

A new blast could potentially take place in Norris Geyser Basin at any time, though major explosions are rare. If fluids have pooled close to the basin’s surface, hydrothermal explosions may be slightly more likely to occur. But the rocky plumbing networks are remarkably complex, Dzurisin says, with small, undetectable changes constantly increasing and decreasing the chances of a blast. The possibility of more explosions remains highly speculative, so the team does not recommend closing off the region to visitors.

The team also wonders if the accumulation of magmatic fluids could be connected to Steamboat’s recent record-breaking number of eruptions. The geyser had similar upticks in activity in the 1960s and early 1980s, perhaps also linked to basin breathing cycles.

But if this really is the case, why is this particular geyser putting on a show when several others remain quiet? “Why not Echinus, which is right next to Steamboat?” wonders Poland.

The link between Steamboat’s hyperactivity and the magma intrusion is circumstantial at best, Dzurisin says, but “the timing does line up.” In the future, he and his colleagues hope to study the fluids that bubble up through the surface to see if they have the chemical fingerprints of a magmatic origin.

Still, the fact that researchers were able to craft a narrative that might explain these dramatic changes is a testament to decades of accumulated data and modern scientific techniques. Twenty years ago, Dzurisin says, such a feat would have been “nearly impossible.”