As the Arctic warms, light pollution may pose a new threat to marine life

Thanks to climate change, more humans are able to pass through the Arctic, and they're making the region's once black polar night brighter.

A research vessel pilots a team of Arctic research scientists through ice north of Svalbard, Norway. Working in the middle of polar night, little light is visible. The team wears survival suits in case the boat capsizes, and they carry rifles in the event they stumble upon a polar bear.

Thanks to climate change, more humans are able to pass through the Arctic, and they're making the region's once black polar night brighter.

The Arctic Circle in the middle of winter is so dark it's hard to see. Because of the way the top of the Earth tilts away from the sun, the star never appears to rise above the horizon, and dark skies drench the Arctic in what’s known as polar night.

“It kind of feels like you’re working the night shift all the time,” says Finlo Cottier, an oceanographer at the Scottish Association for Marine Science. 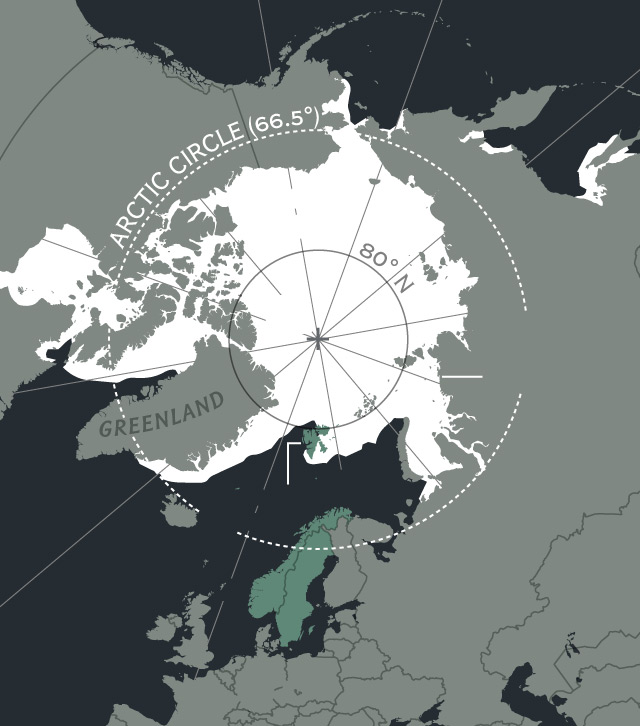 Two years ago, Cottier and a team of scientist traveled to the Arctic in the middle of winter to study how light affects the marine critters living in far northern waters. Like us, marine organisms rely on light to guide their daily functions. Light indicates behavior like when to migrate through the water column to find food, when to mate, and where to hunt.

“In June and July, there is this explosion of growth and activity,” says Cottier. “How do we get to that point? What happens in the polar night that sets things up for this spring bloom? We’re trying to understand the complete cycle.”

Understanding that complete cycle will be critical as the Arctic grapples with climate change. Thinner ice means more light will be able to penetrate dark ocean waters. It will also mean more ships will pass, bringing light with it. And warming waters around the world are pushing certain fish species to higher latitudes, disrupting the food web.

What it all means for marine life is yet unclear, but new research published today in the journal Nature Communications Biology indicates that light pollution could significantly alter how they live even as scientists are still trying to understand their full life cycles.

Testing light in the polar night

“As we go straight north, the hours of daylight diminish very fast,” says Geir Johnsen, a study author and biologist at the Norwegian University of Science and Technology. “At each latitude north we get darker. Then at around 80 degrees [north], there’s no difference between noon and midnight.”

To learn how increasing ship traffic affects marine organisms, the researchers conducted experiments at three different stations north of Norway ranging from 70 degrees North to just below and above 77 degrees North.

At each station—labelled A, B, and C—experiments were conducted in complete darkness when marine organisms might not otherwise be exposed to light. Turning the ship's lights on and off, the team then used echo sounders to sonically detect the presence of organisms in the water.

Not only did the light significantly alter behavior, but acoustic imaging showed it changed behavior as deep as 656 feet (200 meters).

For one, he says, scientific assessments may not be accurate if they don’t take the light conditions in which they study the organisms into account.

Knowing exactly how many fish are in the water has commercial implications, too.

“We know that as the Arctic warms up, species are moving northward. To be able to manage fisheries in a sustainable way, we need to know how many of a species there are,” he says.

Studies have predicted that warming temperatures will allow for trans-Arctic shipping by 2050. Researchers are only just beginning to monitor vessel traffic through the region so they can see how it increases over time. In a study published last September, researchers tracked everything from cargo to cruise ships and found that 5,000 vessels made a total of 132,828 trips over the course of two years.

A brighter world for some

“Behavior like where to be in the water column, when to mate, when to develop—all of this is regulated by light,” says Johnsen. “Light is one of the oldest cues for life, but for the past 100 years humans have used artificial light and we’ve been doing things [to animals] we haven’t been thinking about.”

An estimated 80 percent of the world lives under skies polluted with some form of artificial light, which is increasing by about 6 percent every year.

Steven Haddock from the Monterey Bay Aquarium Research Institute, who wasn’t involved with the study, notes that the research is interesting, but he would like to see it replicated in other conditions and with other methods.

The distinction between species flocking to and fleeing from light is behavior he’s seen in his own research.

“We’ve also seen this on nighttime scuba dives where you have to turn off your light for a period to clear out the swarms of animals that come to visit,” he says. “I definitely believe their result that light will have a profound effect, particularly in a place when there are many days without bright sun.”

He notes that light pollution is impacting marine organisms closer to the equator. Puerto Rico, for example, has a built a cottage industry of ecotourism centered around the bioluminescent plankton living in several of the island’s bays, but light pollution disrupts the organisms. Light pollution has also been found to negatively affect how baby sea turtles find the sea, the migrations birds take, and whether fireflies can mate.