Plunge in carbon emissions from lockdowns will not slow climate change

Emissions may be down, but carbon dioxide still piles up relentlessly in the atmosphere. It’s more important than ever to find climate change solutions, experts say.

In May, the concentration of carbon dioxide in the atmosphere crept up to about 418 parts per million. It was the highest ever recorded in human history and likely higher than at any point in the last three million years.

That record was broken in the midst of the coronavirus pandemic, even though the health crisis has driven one of the largest, most dramatic drops in CO2 emissions ever recorded. During the peak of the global confinements in the first quarter of the year, daily emissions were about 17 percent below last year’s, according to research published this week in Nature Climate Change.

But even such big drops in carbon dioxide emissions will have little impact on overall CO2 concentration in the atmosphere, says Richard Betts—a scientist at the U.K.’s Met Office—and that’s what matters most for climate change. 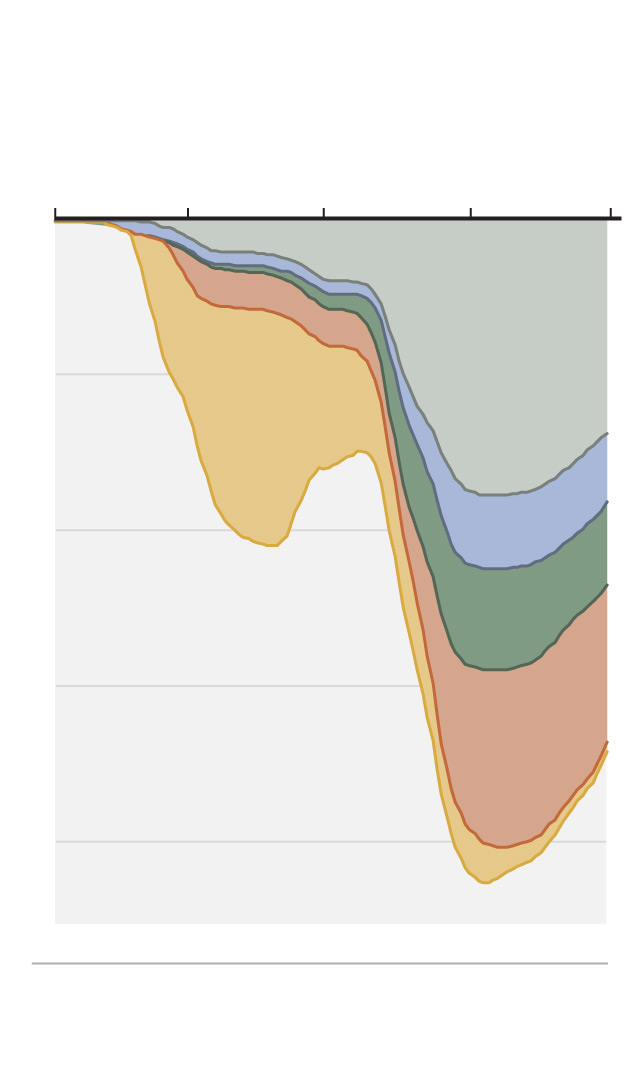 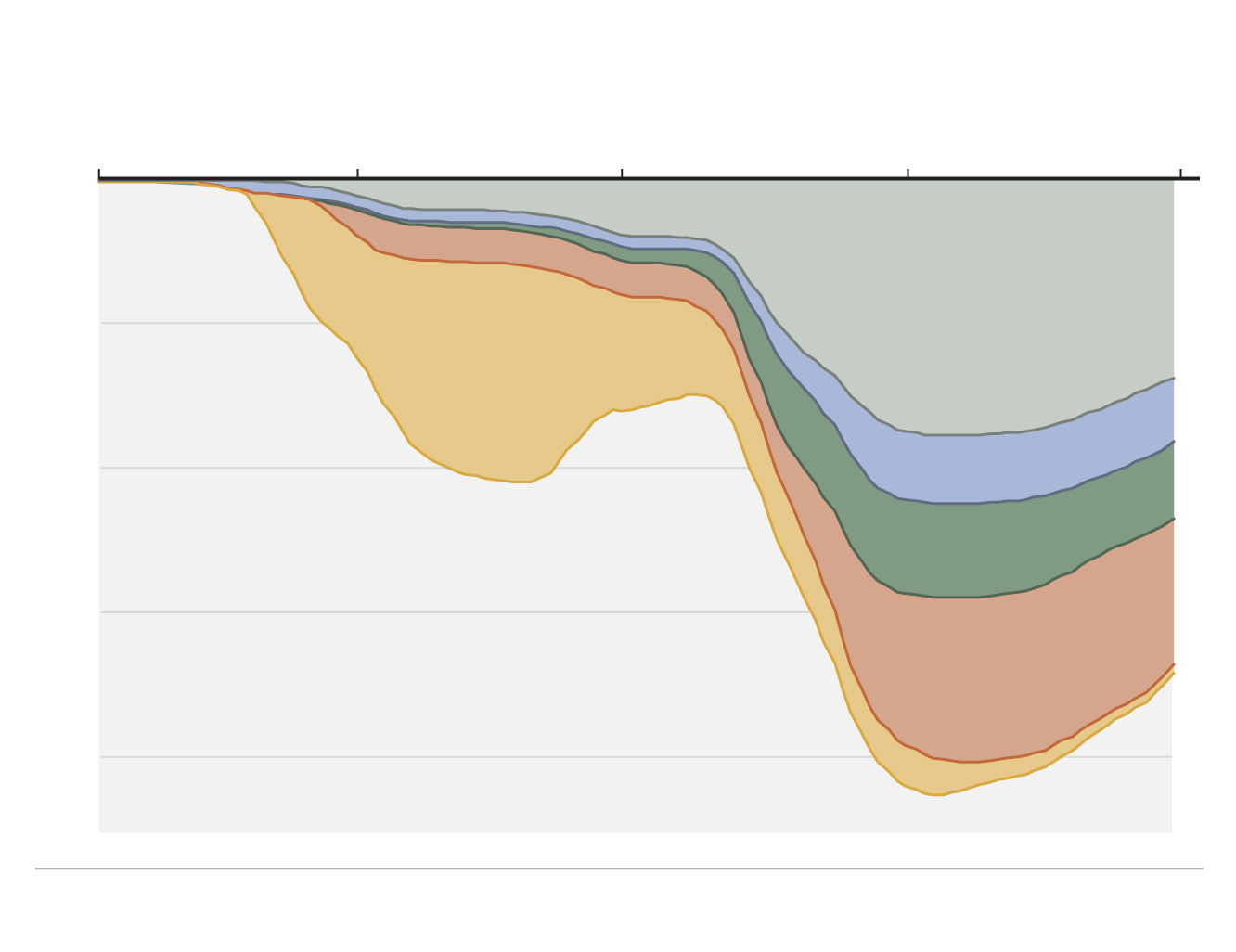 Rest of the world

The pandemic has disrupted life around the world, and stay-at-home orders have kept large swaths of the world at home for months now. But the disruption only results in a tiny drop in the overall concentration of CO2 in the atmosphere because of how long the gas effectively lingers.

So that record concentration of 418 parts per million? That would have been just 0.4 parts per million higher without the virus-driven emissions drop, according to an analysis posted on climate science and policy website CarbonBrief earlier in May.

Still, for energy and climate expert Constantine Samaras, the message is clear: Just because this devasting pandemic has only a small impact on today’s CO2 levels doesn’t mean the climate crisis is lost.

What did we see with CO2 emissions vs. concentrations?

During this unprecedented, deadly global event, millions of people who could stay at home did just that. Cars sat in driveways. Air travel ground to a halt. Manufacturing plants slowed or stopped. Public buildings shut their doors. Even construction slowed down. Nearly every sector of the energy-using economy reacted to the shock in one way or another.

The result was one of the biggest single drops in modern history in the amount of carbon dioxide humans emit.

Over the first few months of 2020, global daily CO2 emissions averaged about 17 percent lower than in 2019. At the moments of the most restrictive and extensive lockdowns, emissions in some countries hovered nearly 30 percent below last year’s averages, says Glen Peters, one of the authors of the Nature Climate Change analysis and a climate scientist at Norway’s Center for International Climate Research.

China’s emissions decreased by about a quarter in February. Other countries saw drops of a few percent in March and April, a team led by Tsinghua University’s Zhu Liu found in a separate analysis. The effects, in some ways, are big—but in other ways, not big enough, he says.

“Only when we would reduce our emissions even more than this for longer would we be able to see the decline in concentrations in the atmosphere,” he says. “We would probably need, like, a 20 percent reduction for the whole year—so every month, for the whole world, like April. But the world cannot suffer so long a lockdown.”

The International Energy Agency estimates that by the end of 2020, global emissions will decline by about 8 percent compared to last year. That would work out to about 2.6 billion tons of carbon not added to the atmosphere. The Nature Climate Change team estimates that drop to be somewhere between 4 to 7 percent, depending on the way lockdowns develop over the rest of the year. If people are driven back into their homes by rising COVID-19 infection rates, emissions could fall even more.

But that doesn’t mean the carbon dioxide problem is solved, or even that there will be much positive effect on skies overfull with CO2.

“Climate change is a cumulative problem,” says Peters. “It’s not like other pollution, where someone is putting something in the river and then they stop putting it in the river and [the] problem is solved. It’s all our emissions in the past that matter.”

Think of the atmosphere as a bathtub. Human-driven CO2 emissions are like the water coming out of the tap. The ocean and land, which absorb or use up some of that CO2, are the drain—but even when they’re wide open, they can only let out half the water that comes in.

When a momentous event like this pandemic happens to push CO2 emissions down, it’s as if the bath’s tap has been shut by 17 percent. But over 80 percent of the water is still gushing into the tub, so the water level in the tub will still rise. It might not fill quite as quickly as it did before, but it’s definitely not draining completely.

In short, even though emissions have dropped, CO2 is still going into the atmosphere and it will still accumulate there, just as it has since humans started burning vast amounts of fossil fuels.

“We treat the atmosphere like this big waste dump,” says Ralph Keeling, a scientist at the Scripps Institution of Oceanography whose lab runs the Mauna Loa long-term monitoring project of atmospheric CO2. “But when you throw something in the trash, it’s still in the landfill. It’s still out there. We can’t just sweep it away.”

What does this emissions drop mean for for climate?

Scientists have a pretty good idea of how much more atmospheric CO2 will accumulate each year: about half as much as we pump up there (the other half gets absorbed by plants and the oceans). Each year, the average concentration gets higher. In 2018, for example, concentrations rose by 2.5 parts per million, to an average of 407.4; 2019 averages have not yet been released, but a similar value is expected.

On top of this rising pattern—which depends primarily on how much humans emit—CO2 concentrations go up and down during the seasons. They’re highest in late spring each year, as plants around the Northern Hemisphere wake up from the winter and gobble up the carbon food, and lowest in early fall, as plants slow down for the coming winter (the Northern Hemisphere has so much more land and plants than the southern that it dominates the pattern).

Betts and his colleagues run a model that makes these predictions for the coming year. Their forecasts are usually remarkably accurate. As soon as it became clear that coronavirus would suppress emissions this year, they realized that they could figure out exactly how much the drop would affect the overall concentrations of CO2 in the atmosphere.

By the beginning of the pandemic, Betts’s team had already predicted what atmospheric CO2 was supposed to do in 2020. They forecast that in May, at the peak of the gas’s annual seasonal cycle, its concentration would probably hover around 417 ppm (and sure enough, in early May the station saw a concentration of just over 418 parts per million.) The team also expected that at its seasonal low in September, it would be around 410 parts per million. So the final prediction, for the average over the course of the year: 414 parts per million. That’s barely different than what the team expected without the coronavirus-related impacts.

“The message of all that is that there’s a limit of what you can do with individual actions,” says Betts—actions such as driving or flying less. “We’ve probably done as much as we can, personally, to reduce our own emissions during this devastating time.”

So, he says, “it’s not about going back to the way things were, but to a better way.”

What Betts showed was the dark side of the emissions problem. Even with all this economic upheaval and the emotional toll of isolating, our emissions have dropped only 17 percent in the short term and will likely drop by less than 10 percent for the year. The effects of those declines on the overall greenhouse gas problem are infinitesimal.

Framed another way: We’re still spitting out more than 80 percent as much CO2 as normal, even when life feels devastatingly different. Staying home, it is abundantly clear now, is far from enough to solve the climate crisis.

“From humanity’s perspective, the COVID-19 pandemic is the largest event many of us have ever experienced. It affects literally everyone on the planet,” says Anna Michalak, a scientist at Stanford’s Carnegie Institution for Science.

“In a way, it’s hard to mentally reconcile that with just a small difference in emissions; it seems almost dismissive. But what’s important to remember is that this shows how the use of carbon as a fuel source is so deeply embedded in every aspect of how humanity runs itself, so the emissions keep happening,” she says.

The IPCC has warned that global temperature rises should be limited to 2.7 degrees F (1.5 degrees C ) beyond pre-industrial levels in order to keep the worst, most devastating effects of climate change from battering human societies. To hit that goal, overall human-caused greenhouse gas emissions need to start dropping by about 7.6 percent each year from now until 2030 (and beyond). Eventually, of course, they need to get to zero.

(See how your city might change by 2070 if climate change isn’t addressed).

This year’s emissions drop is right around 8 percent. Samaras says that in no way represents what a concerted global effort to actually hit that goal would do. But it also shouldn’t be taken as an indication that efforts would be futile.

Where is all the CO2 still coming from?

The Nature Climate Change team split the CO2 sources into six categories and looked at how much each changed between January and April, while countries rolled in and out of confinement.

The biggest change in activity was in aviation; it dropped by an average of 75 percent by early April. But planes only make up about 3 percent of the CO2 emissions problem, so even that giant decrease has had only a small effect on the gushing of the CO2 “tap.”

The other huge change was in surface transport such as cars and trucks, where daily activity sank an average of 50 percent. That change translated into a big effect on emissions, because driving makes up a bigger piece of the normal CO2-waste pie. In the four months that people drove less, about 6 megatons of CO2 didn’t go into the atmosphere each day, equal to about 1.2 million American cars’ yearly mileage.

About 45 percent of the world’s CO2 waste generally comes from making heat and power. During the crisis, people needed those almost as much as ever. Emissions from power use dropped by about 15 percent—which translated into about 3.3 megatons of CO2 not added to the atmosphere each day.

All in all, the reduction in daily emissions got us, as a planet, back down to the levels we were at in 2006. The IPCC’s 2.7 degrees F goals suggest that we need to get back to 1990s emissions levels within about a decade.

“This pandemic—it’s tragic,” says Michalak. “It’s not anyone’s preferred way to get [CO2 reductions]. But what this experience does show is when humanity is united around a goal, big changes can happen on short time scales.”