Nearly 20,000 acres once existed of this wetland where groundwater was as salty as the ocean. Now conservationists are struggling to save what’s left.

Seen through a chain link fence is the Marsh Wren saline wetland just outside of Lincoln, Nebraska. The fence separates the newly restored marsh from a housing development. Urban sprawl is the biggest threat to the remaining marshes.

Nearly 20,000 acres once existed of this wetland where groundwater was as salty as the ocean. Now conservationists are struggling to save what’s left.

Around a hundred million years ago, what is now Nebraska’s tranquil prairie was covered by a vast sea, where shark-like marine reptiles roamed. When the sea eventually retreated, it left salty rock formations in its wake, making the groundwater that gurgles from the wetlands around Lincoln, Nebraska, as salty as today’s oceans.

More than a thousand miles from any coast, the marshes are one of the only places in the United States where the naturally occurring water is saline. In addition to providing the flood protection wetlands are known for, they’re a refuge for species uniquely adapted to salty conditions.

But a hundred years of building roads, homes, stores, and offices in and around Lincoln, a city of more than 280,000, have filled in and carved up roughly 80 percent of the marshes. It’s estimated that nearly 20,000 acres of salt marsh once existed; today only 4,000 acres remain scattered throughout the region.

Of more than a million acres of wetland that dot Nebraska, the salt marshes around Lincoln are the most endangered. If these salt marshes disappear, so too will Nebraska’s reminder that their prairies were once dominated by the shallow seas of the Western Interior Seaway.

But conservationists say the once-neglected marshes are slowly but surely being recognized for the environmental asset they are. 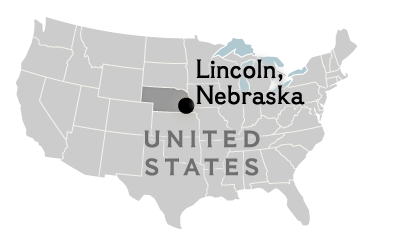 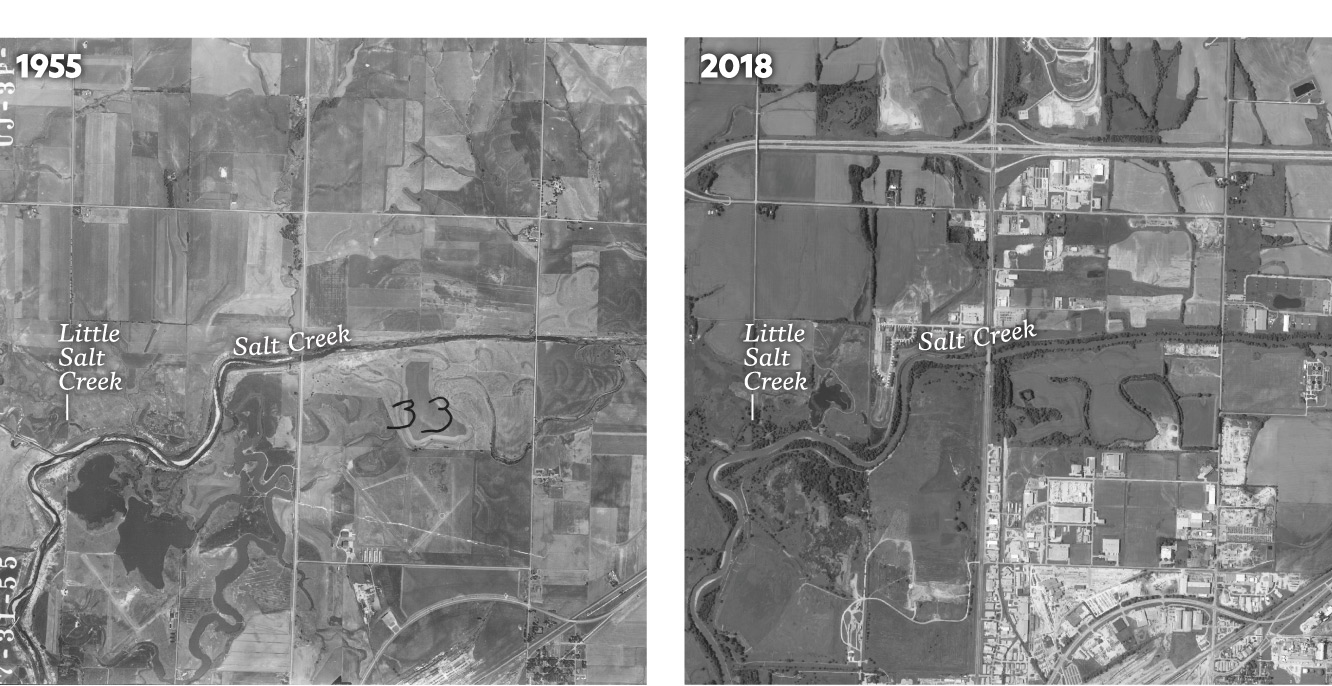 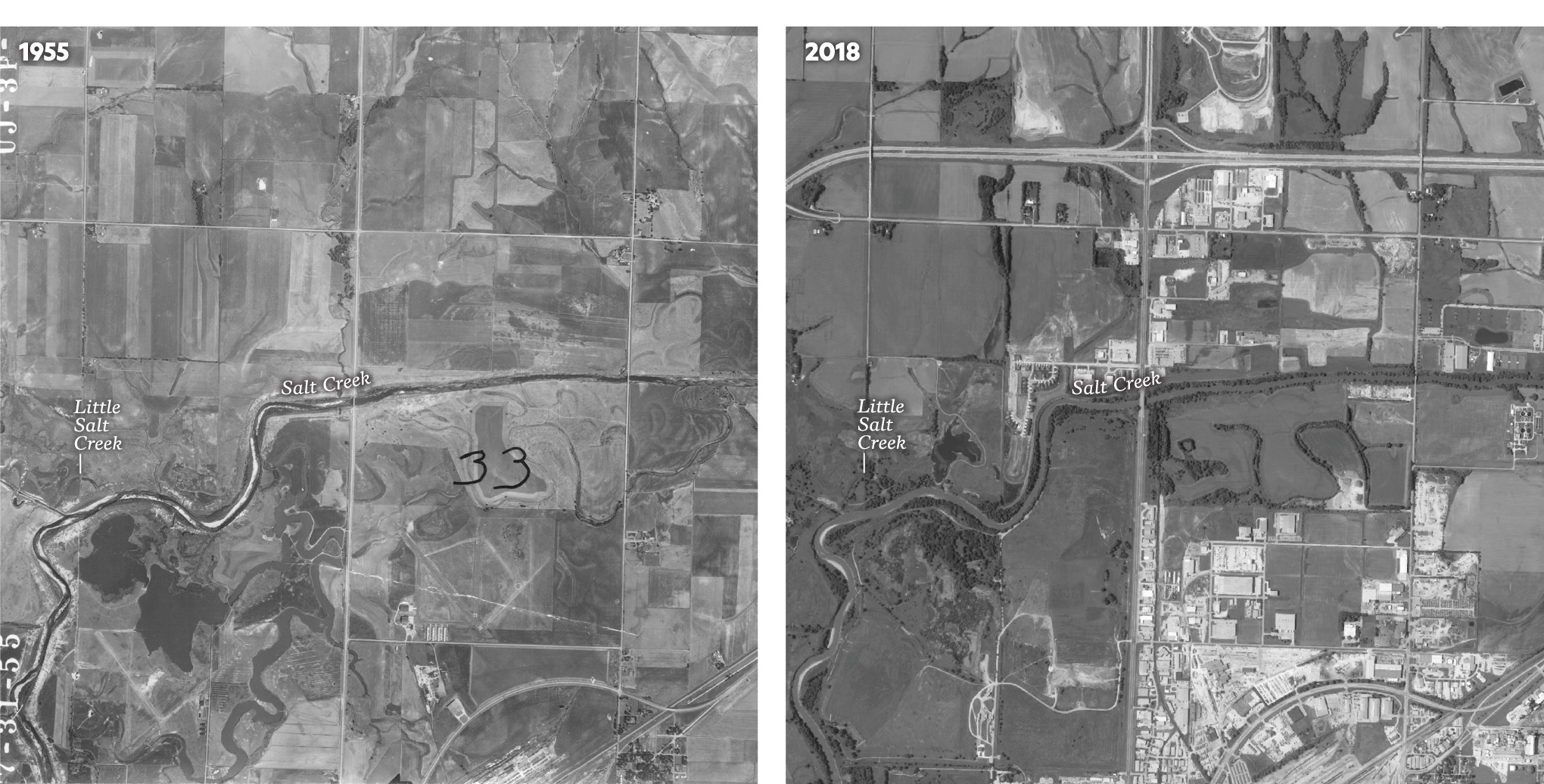 A landscape attraction for humans and animals

Salt marshes are common in coastal states, but only in Nebraska and Kansas are they so far from any present-day ocean. The salt marshes that lie outside of Lincoln are contained within the Salt Creek watershed that covers the roughly 2,016 square miles around Salt Creek, a tributary of the Platte River. The unique landscape has produced species that can’t be found anywhere else on Earth, like the Salt Creek tiger beetle.

“The females will only lay eggs with a certain amount of salinity in the soil,” says Stephen Spomer, an entomologist at the University of Nebraska Lincoln.

As the salt marshes slowly disappear, so do the beetle and endemic plants such as saltwort. Spomer estimates that only about 250 of the beetles are left.

In addition, Nebraska’s wetland, the salt marshes included, are an important stop for more than 200 species of birds as they migrate north every spring from as far away as South America. When the birds lose habitat, they’re forced to find alternate routes that are often longer, an adjustment scientists say threatens their survival.

The ecological beauty of this saline wetland is subdued, and for a long time its gradual disappearance attracted little notice.

“Kind of like everybody else, I don’t remember learning about it,” says Madeline Cass, a photographer who grew up in the region, but only began exploring the marshes in her early 20s.

“Historically, wetlands are looked at as a nuisance,” says Tom Malmstrom, the natural resources coordinator for the city park and recreation department’s Saline Wetlands Conservation Project, which formed in 2003 to restore and conserve what was left of the salt marshes.

The marshes flood with seasonal regularity, and when they’re dry, the sediment is soft and unstable, making them a challenge to build on.

But left intact and undeveloped, a marsh offers an important ecological benefit to humans living around it. Marshes improve water quality, meaning that what flows out is cleaner than what flows in. When polluted water enters a marsh, wetland plants trap the pollutants, which settle and attach to the muddy sediment at the bottom. Microorganisms living in wetlands can help convert chemicals like nitrates into gas that’s released into the atmosphere as nitrogen, and marsh plants store chemicals like phosphorus in their roots.

Drinking water in Lincoln is sourced from wells along the Platte River, which can become contaminated by polluted surface water.

Decades of carving up the marsh

Wetlands store floodwater by providing a sink that absorbs extra water, helping to mitigate flood risks, which are expected to increase as warming climate brings more extreme rains. Last year, much of the Midwest was struck by destructive flooding, yet Lincoln was largely spared.

While the wetland offers a way to naturally control flooding, it was flooding that led to much of the natural area being carved up by developers. Thirteen percent of Lincoln sits in a floodplain and since 1900, the city has experienced more than 100 floods. To mitigate damage from rising waters, the region’s Salt Creek was reconfigured into straighter, narrow channels.

Where the wetland hasn’t been channelized and straightened, it’s simply been covered up. A major highway runs through it, and Cass’s photos show where residential backyards directly meet marshland.

Lancaster County, which includes Lincoln, added just over 18,000 new houses between 2000 and 2014, most of them in the city itself. But as the city continues to grow—a major data center is planned that could bring more jobs and residents—it has adopted a Comprehensive Plan with a goal of “no net loss” of salt marshes.

Supporters of the saline wetlands are scrambling to save whatever they can of the remaining marshes. Since 2003, 1,676 acres of private land have been bought for conservation, and Malmstrom says eight different initiatives have protected or restored the marshland. To restore a formerly covered marsh, dirt must be excavated and steep banks flattened. In some cases, saline groundwater must be manually pumped to the surface to restore a marsh’s original hydrology.

Money for the projects is tight and may get tighter; the city is working on a new budget to account for the economic costs of the COVID-19 pandemic. But in the 18 years that Malmstrom has been involved in the city’s planning, he says he sees a greater interest now in conservation than there’s ever been.

“We probably didn’t do a great job 30 to 40 years ago,” he says of conserving the marshes, but now, “I think the city and the county have done a commendable job recognizing the benefits of environmental resources.”

“There’s always a problem of money. There’s only so much money to go around,” says Spomer. “The efforts have been pretty good, considering the times we’re in.”