Arctic summer sea ice could disappear as early as 2035

By the time a toddler graduates from high school, summer sea ice in the high North could be a thing of the past.

Last month, less sea ice covered the Arctic Ocean than in any other July since scientists began keeping track of it with satellites in 1979, marking another step toward a devastating and planet-reshaping inevitability: an ice-free summer for the Arctic Ocean.

Each year, Arctic sea ice expands as the sea surface freezes during the long, dark winter. At its maximum in March, the ice covers nearly the entire Arctic Ocean, almost 6 million square miles. It melts back during summer, reaching its lowest point in September. In July during the 1980s, the ice covered an average of about 3.8 million square miles, roughly the area of the U.S. or Canada.

This July, sea ice covered only about 2.8 million square miles. Since 1979, Arctic sea ice has declined by an average of 27,000 square miles a year, an area the size of North Dakota that melts each year and doesn’t grow back.

Area of Arctic sea ice in

In July of 2020, the area covered by sea ice in the Arctic Ocean reached a new low for the month. With record warming caused by human activity, the Northern Sea Route became ice-free earlier than previously recorded. At the end of July, Canada’s last intact ice-shelf collapsed.

EXTENT IS DEFINED AS OCEAN WITH AT LEAST 15% 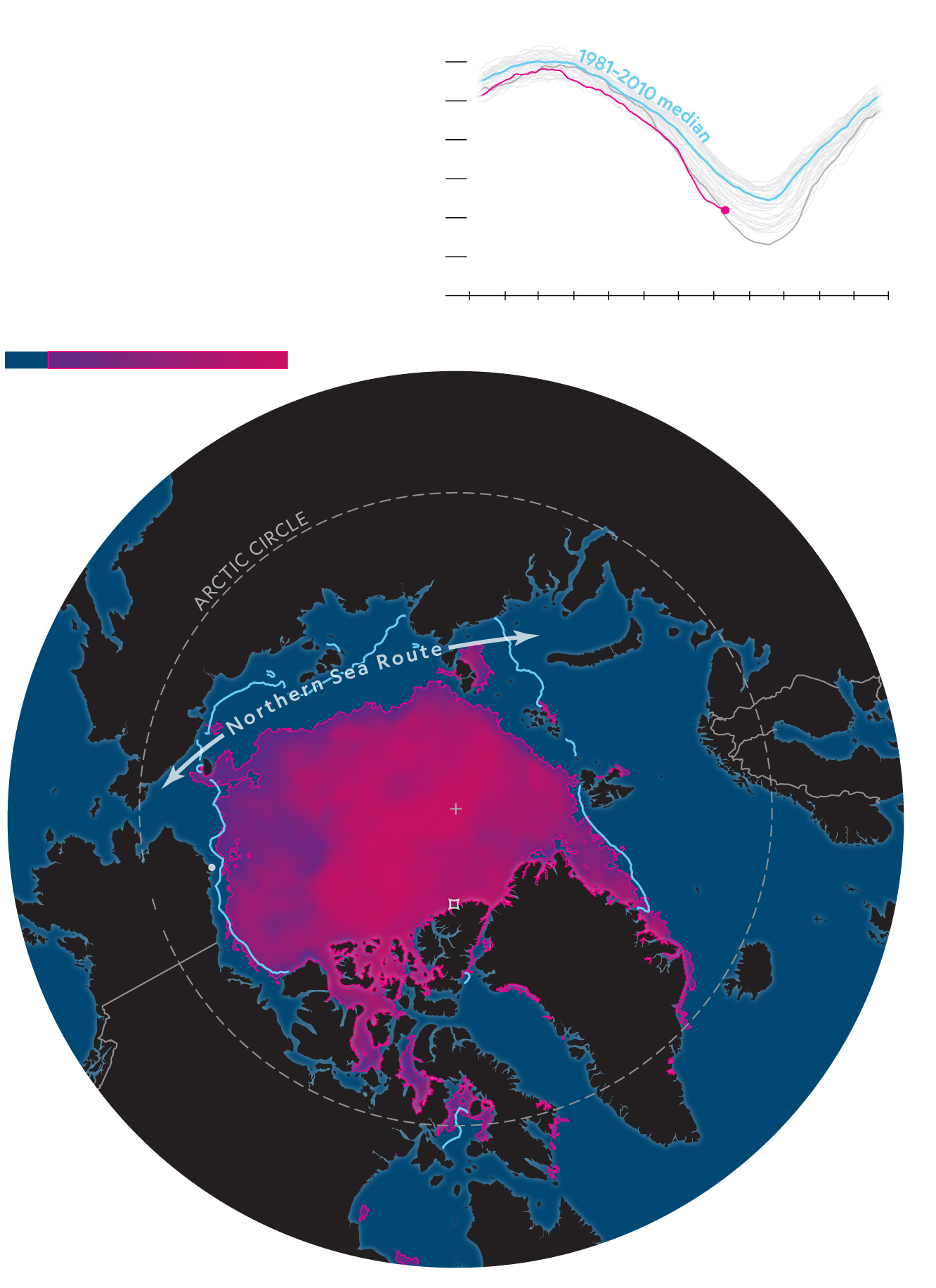 Area of Arctic sea ice in

In July of 2020, the area covered by sea ice in the Arctic Ocean reached a new low for the month. With record warming caused by human activity, the Northern Sea Route became ice-free earlier than previously recorded. At the end of July, Canada’s last intact ice-shelf collapsed.

EXTENT IS DEFINED AS OCEAN

IS inferred for North Pole.

A study published this week in Nature Climate Change strongly reinforces predictions that summers in the northernmost sea are likely to lose their ice cover entirely by 2035—around the time a toddler today will graduate from high school.

“This is pointing to something we know is happening very quickly, and now we know we have to be ready for it [sooner than we might have thought],” says Maria Vittoria Guarino, the lead author of the paper and a climate scientist at the British Antarctic Survey.

A center of warming

The Arctic is warming more than twice as fast as the rest of the planet, meaning that average temperatures have increased by about 3.5 to 5.5 degrees Fahrenheit (2 to 3 degrees Celsius) since the preindustrial period, compared to roughly 1.8 degrees F (1 degree C) for the planet as a whole. The change is accelerating, too: 0.75 degrees C of that warming have happened in the last decade.

“In the northern Bering Sea, sea ice used to be present with us for eight months a year,” a team of Arctic Indigenous leaders wrote in NOAA’s 2019 Arctic Report Card. “Today, we may only see three or four months with ice.”

The effects touch virtually every aspect of life in the region. Land-fast ice, now missing in many parts of the Arctic, used to protect shorelines from storms and waves. Its absence hastens coastal erosion, endangering dozens of communities. Villages like Shishmaref, on an island in the shallow Chuchki Sea, are in big trouble as rising sea levels, loss of protective sea ice, and melting permafrost destabilize the native town’s infrastructure.

“Alaska native people used to have a semi-nomadic lifestyle,” says Sarah Aarons, an Iñupiaq climate scientist at the Scripps Institution of Oceanography. After the U.S. colonized the region, “we were forced to choose one location for our villages, and most are on the coast. It puts us in a very vulnerable position for sea level rise, as well as for the timing of sea ice loss.”

A 2009 Government Accountability Office report suggested that nearly all of the 213 Native villages in Alaska are at risk of coastal erosion.

This year, an unprecedented Arctic heat wave, which researchers say was made at least 600 times more likely by human-caused climate change, sent air temperatures in Siberia above 100 degrees F, encouraged tundra fires to smolder there for months, and forced the collapse of Canada’s last remaining ice shelf off Ellesmere Island.

It also drove sea ice around the Arctic to melt even faster than usual.

Scientists are watching closely to see whether the rest of this summer continues on this record-breaking trend. But whether or not 2020 ends up being a superlative isn’t really the key question, says Julienne Stroeve, a climate scientist at the National Snow and Ice Data Center and a coauthor of the paper.

“We’re never going to return to conditions like there were in the 1980s and 90s,” she says. “It’s not recovering. There are going to be ups and downs, but it’s never going to go back to what it was, given our current climate state today.”

For many scientists, the big question is: When will the summer sea ice disappear completely, and how will its loss reverberate across the planet?

Arctic sea ice influences climate and weather far beyond the Arctic. Its bright whiteness reflects solar heat back into the atmosphere and insulates the ocean below. The temperature difference between a cold Arctic and the hot tropics drives winds and ocean currents and influences weather globally.

To better predict the future of the Arctic, scientists have looked to analogs from the past. Guarino and her colleagues focused on one period in particular.

About 130,000 years ago, as Earth swung out of an ice age, it entered an interglacial period even warmer than the one we’re in today. The ice age cycles are pushed along by changes in the shape of Earth’s orbit and the tilt of its axis, and at the time, the Northern Hemisphere was tilted more directly at the sun, which allowed more solar heat to reach the surface at high latitudes.

The warming during the Last Interglacial was especially intense though: The Arctic’s average temperature was between 7 and 9 degrees F (4 and 5 degrees C) warmer than just before the industrial revolution, and sea levels were at least 18 feet higher.

Evidence from sediment cores from the bottom of the Arctic Ocean suggests that there was much less, or possibly no, summer ice cover at the time. Most current climate models have trouble reproducing that ice loss, and the intense Arctic warmth in general.

Now, the UK Met Office's Hadley Center has developed a model that does. One of the crucial tweaks the researchers made was to accurately represent the small, glistening ponds of water that form on top of ice as the hot sun melts it.

Water is darker than bright, reflective ice, and it absorbs that solar heat more readily. So once the ponds form, they accelerate the melting. Ponds like these have been observed recently to speed up melting on land-based ice sheets in Greenland and Antarctica. In the Arctic during the Last Interglacial, say Guarino and her colleagues, they did the same thing.

With the melt ponds and some other added physics, the model generates an Arctic entirely without summer ice. And without the cooling effect of summer sea ice, the Arctic in the model is as warm as the data suggest the Arctic really was during the Last Interglacial.

The model’s ability to represent the Last Interglacial, in turn, suggests that it can be trusted with the future. When the model was run forward in time, it predicted that Arctic sea ice would all but disappear by 2035.

That is sooner than many forecasts, within the bounds of others—but the forecast of an early ice loss now seems more realistic.

“Now, there’s a physically plausible mechanism that tells us that the Arctic could go quickly in this direction,” says Jesse Farmer, a climate scientist at Princeton University, who was not involved in the research.

Even with aggressive action, it’s between unlikely and impossible that this trend can be turned around before the region hits the point where summer ice is gone and doesn’t come back, says Stroeve.

That is in no way a reason to give up on efforts to stop future warming, she says. It’s just looking at the situation realistically.

Alaska Natives have been doing that for some time. Lost sea ice is already affecting the timing, abundance, or presence of the fish, seals, or whales they hunt for and rely on for food. It’s not all bad: in some parts of the state, especially nearer the Beaufort Sea, the changing sea ice conditions benefit whalers, at least for now.

“For some of the whaling captains [on that side], they’re just smiling, saying we love it: our whales are butterballs right now,” says Kaare Siquak Erickson, the science liaison for the Ukpeaġvik Iñupiat Corporation in Utqiaġvik (formerly Barrow), Alaska.

For Aarons, the reality hit long ago, and the question now is about the future. “Communities that are located in these areas are already thinking about what the new Arctic is going to look like, and how we’re going to adapt our ways of life,” says Aarons. “We know how to adapt, to advocate for our region.”