The "Garimpo do Juma"—a gold mine on the Juma River in Apuí, Brazil—spreads over 10 hectares and was hollowed out to 25 meters deep. Deforestation, a consequence of mining, is irreversible. March 2008.

The mosquitoes come in swarms not long after the forest burns.

As they scorch one patch of trees after another, the miners carve deep pits into the cleared land to extract gold. Many of these excavations encroach on protected land near the clearings, destroying even more of the forest cover the people who live there depend on. The cavernous craters fill with water, which becomes even more stagnant once the mines are abandoned. It is there that mosquito-borne illnesses, like malaria, begin to spread more easily.

“All those pools of water become phenomenal breeding habitats,” says Marcia Castro, chair of Harvard University’s department of global health and population. “Since the ’80s, you find over and over again examples in the Amazon where mining pits were opened and you have peaks of transmission of malaria.”

Deforestation in the Amazon rose 25 percent in the first six months of 2020. Large pits created by gold mining destroy swaths of the rainforest and become breeding grounds for disease-carrying mosquitoes.

Year of most recent significant malaria presence, by municipality 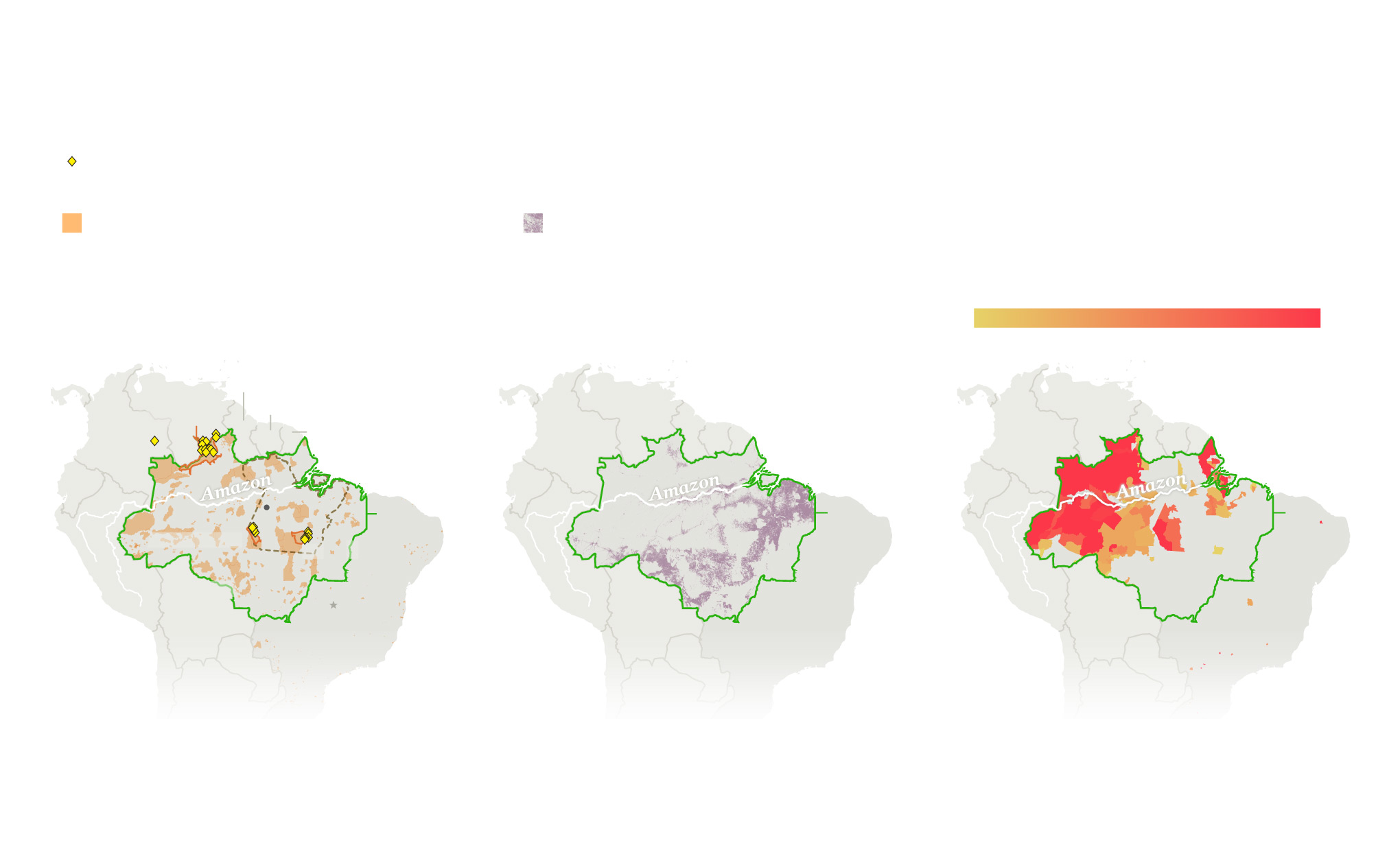 Deforestation in the Amazon rose 25 percent in the first six months of 2020. Large pits created by gold mining destroy swaths of the rainforest and become breeding grounds for disease-carrying mosquitoes.

Year of most recent significant malaria presence, by municipality

This connection—between deforestation and disease—has set off alarm bells for Amazon experts and locals alike this year. Last year’s record-breaking deforestation rates in the region surged again in the first half of 2020 and aren’t expected to slow down, as the forest heads into its burning season and the government lags in monitoring its destruction. And with gold prices at a decade high of more than $2,000 an ounce, illegal mining for the metal, often in conservation areas and on Indigenous land, is expected to leave the Amazon rife with mosquito breeding habitats—and one more public health crisis to manage.

While any deforestation can increase the transmission rate of mosquito-borne illnesses, it’s the pits left by rampant illegal gold mining that are creating ideal conditions for the malaria-carrying Anopheles mosquito to reproduce, says Rachel Lowe of the London School of Hygiene and Tropical Medicine.

Between 2017 and 2019, gold mining destroyed 25,315 acres of land across three Indigenous territories—Munduruku, Yanomami, and Kayapó—located in Brazil’s Legal Amazon (BLA), a socio-geographic area that includes all nine Amazon-basin states created by the Brazilian government in 1948 to help plan economic and social development in the region. That’s an area equivalent to 14,000 soccer fields, according to the nonprofit Amazon Conservation.

This tree loss has continued into 2020 and extends well past these Indigenous lands. Deforestation in all of the Amazon rose 25 percent in the first six months of the year, according to Brazil’s National Institute for Space Research (Inpe)—a stat independently confirmed by the Institute of People and the Environment of the Amazon, a nonprofit research institution that studies conservation and sustainability.

The institute also found that 43 percent of this deforestation happened in the northern Brazilian state of Pará. In June, as the Amazon entered its dry season, when fires spread more easily, 22 percent of BLA deforestation took place on conservation areas, and 3 percent occurred on Indigenous land.

Meanwhile, the Pará state government says the rate of malaria transmission in mining areas was up 17.8 percent over the first six months of 2020. That rate, however, could be much higher, as many cases go unreported. Looking more broadly, mosquito-borne illnesses overall are up 32 percent in the Tapajós region, which includes Itaituba, when compared to the same period in 2019. On Indigenous territories in the state, that number is 46.7 percent.

The conditions in the clandestine mining camps are part of the problem. Larger areas of land cleared to create pasture for cattle can also cause malaria to spread, but it’s the smaller patches of deforested land used for mining that have higher risk for malaria transmission.

“They’re confined, usually you have people living nearby, and those people are highly exposed to all the environmental changes,” says Castro. “The conditions are conducive to more breeding habitats, increasing the density of mosquitoes, and then increasing transmissions.”

The use of mosquito nets and other preventative measures are typically non-existent, and while Brazil does have a public healthcare system, known as SUS, gaining access to it in remote areas of the Amazon is almost impossible, notes André Siqueira, an infectologist and researcher at the Oswaldo Cruz Foundation (Fiocruz) in Rio de Janeiro. Even if there were clinics or hospitals nearby, prospectors likely wouldn’t seek medical treatment, since their work is illegal.

Instead, the miners, who generally haven’t been educated on the prevention and treatment of diseases like malaria, either “end up self-medicating, taking a smaller dose of the medication than necessary and being infected for several days, or taking anti-malaria drugs for any fever they get,” Siqueira says.

When those prospectors go from one area of the rainforest to the next, they bring malaria with them. The disease can’t be transmitted directly from person to person. But if a mosquito bites someone already infected with malaria, it can then take on the parasite that causes the disease and transmit it to others, whether it be people in the cities where miners eventually return home, or Indigenous people living in nearby regions of the Amazon.

Karo Munduruku has lived on the Praia do Mangue Indigenous Reserve his entire life. The reserve sits just outside of Itaituba, a municipality in Pará that locals refer to as Nugget Town. Illegal gold miners, known as garimpeiros in Brazil, started encroaching on the Munduruku land long before he was born.

“I’ll never get used to seeing the destruction they leave behind,” he says.

As attention has shifted toward the soaring number of COVID-19 cases and deaths in the country, and the federal government has made moves to weaken laws meant to protect the Amazon, Munduruku worries that deforestation will start taking a toll on his family’s health. He remembers how his two younger brothers suffered for weeks with fever, chills, night sweats, and nausea when they contracted malaria years ago. He doesn’t want that to happen again.

Migration in the Amazon region has also seen an uptick in recent years, as Venezuelans cross in and out of Brazil and other South American countries to escape the economic and political crisis at home. A traveler who contracts malaria in the Brazilian Amazon could later have a flareup of the disease in another country.

“That might provide an opportunity for transmission to start up again,” says Lowe, whose research focuses on how environmental and socio-economic factors interact to determine the risk of disease transmission. And because of the global connectedness between people and disease, finding a way to rid the world of this imbalance between human and environmental health is crucial.

For the region to regain its balance, Castro believes a complete about-face would have to take place. The development model in the Amazon, she says, has always been about exploiting natural resources, from the rubber boom in the early 1900s to the gold rush that continues today. Looking to Indigenous people and other traditional groups who live in the Amazon is the first step to creating a model that would allow the forest’s natural resources to be both used and protected.

“People know how to use the forest in a sustainable way, and there’s plenty of data showing that you can make the Amazon profitable and productive without increasing deforestation,” she says. “If we’re seeing what we’re seeing now, it’s because our model has completely failed.”