The colleges with virtually no coronavirus cases

A handful of institutes of higher learning are keeping COVID-19 at bay. Here’s how they do it. 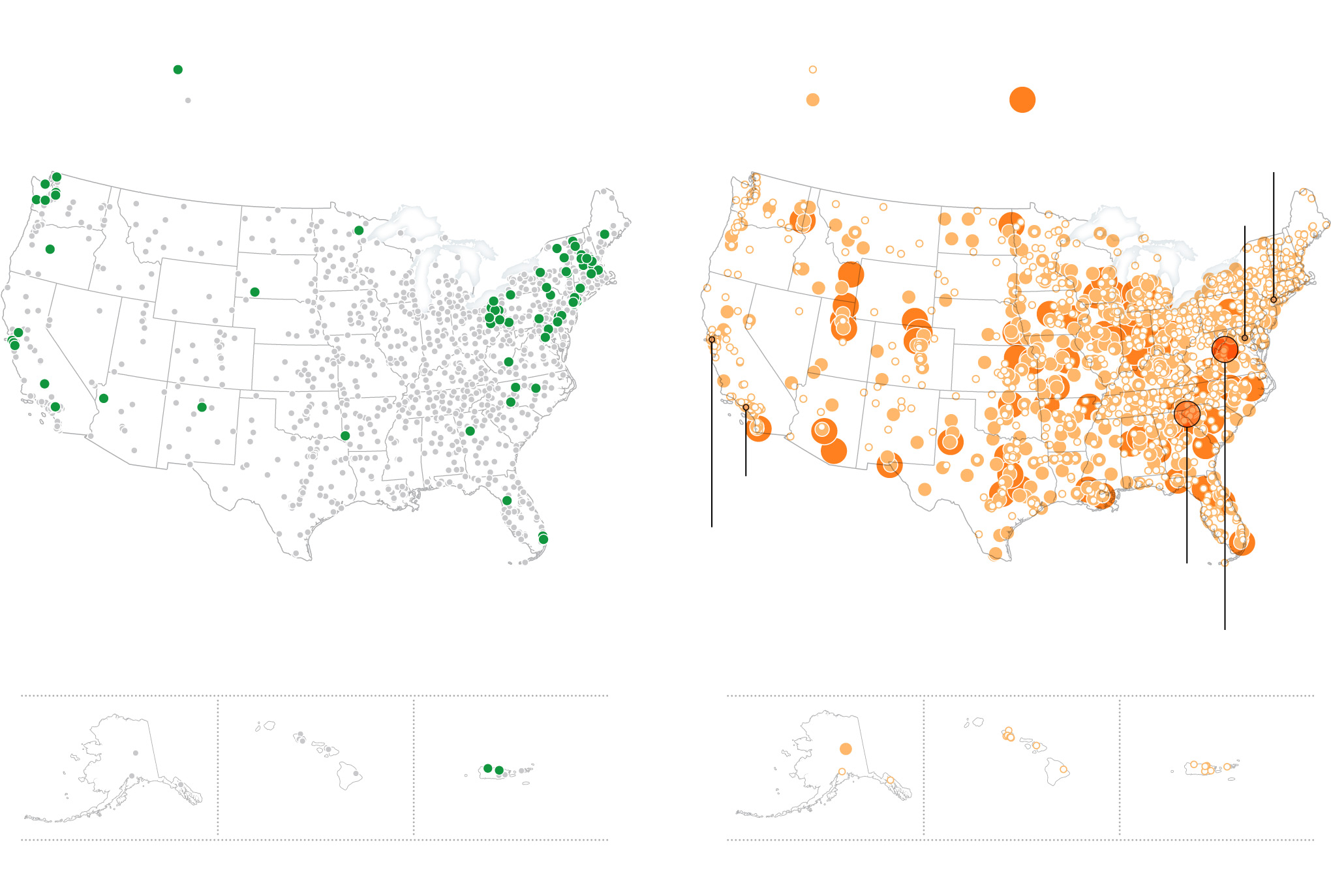 Ava McDonald strode across her college’s campus on the way to the library, happy to spend the fall back in idyllic Bronxville, New York, after what has been a tumultuous year. The sophomore’s classmates lounged on blankets. Some talked at a distance. Others pored over books. Except for their masks, everything at Sarah Lawrence College appeared to be just as it was before the coronavirus pandemic swept the globe.

For the venerable liberal arts college’s 1,400 or so students, the campus has felt like a safe haven where they could live without fear of catching or spreading COVID-19. As of this writing, Sarah Lawrence has had only 11 cases of the virus, a minuscule number compared to other colleges and universities across the United States, several of which exceed 1,000 cases on their campuses.

In contrast to the pandemic drama playing out at colleges and universities across the country, a handful of schools, including Sarah Lawrence, have kept the disease at bay. Some of these schools are public, others private. All have created their own small public health infrastructures, sharing cohesive public health messaging and implementing COVID-19 testing regimens to stop the virus from spreading on their campuses.

At Sarah Lawrence, a seemingly carefree atmosphere belies months of planning. This past summer, college president Cristle Collins Judd started thinking about what the fall would look like on her campus. When fall arrived, the college had received a makeover that was nearly invisible from the outside, except for posted signs reminding students to wear masks and circles painted on the lawn to indicate the best places to sit for proper social distancing.

Only about 35 percent of the undergraduate student body now lives on campus, down from 84 percent last year. Most of these students are freshmen. They had to provide their COVID-19 test results within two weeks of arrival, and they have continued to undergo what Judd calls “surveillance testing” at monthly intervals throughout the semester.

Every dorm room houses a single student instead of the usual double or triple occupancy, and the school has kept several rooms empty to be used for quarantines. The school also reworked the pedestrian traffic flow, adjusting the entrances and exits of buildings to make social distancing easier. All the buildings are locked, too: only people with key cards can enter, as McDonald does almost every day.

Even though her classes as a writing major are all online, McDonald hasn’t been cooped up in her room. She picks up grab-and-go meals at the campus center, and when the weather is good, she studies at a desk outside. Life on campus has felt far from lonely. As a resident advisor, McDonald helps keep her residents on track with pandemic safety protocols even while making sure they haven’t become isolated from the rest of campus.

“The activities council does an event almost every day either in person or online,” McDonald says. “I would end my night by going to the open mic, for example, where a bunch of students just get on a Zoom call, and everyone performs whatever they want to share.”

The school attributes its success at keeping coronavirus at bay not to the students’ strict adherence to the rules, but to the campus’s camaraderie. “A key part for us was active communication with our students about caring for each other as a community,” says Judd.

The coronavirus saga played out differently on James Madison University’s bucolic Shenandoah Valley campus in Virginia. When junior Joseph Dwyer arrived to help the football team as a trainer this summer, he felt confident the school had the situation under control. He lived in a dorm with the team. They wore masks and followed the guidelines from the U.S. Centers for Disease Control and Prevention.

When the rest of the students arrived in September, everything changed. The university’s plan quickly went off the rails for its 22,000 person student body, of which 30 percent live on campus in a typical year.

“There was no testing. They didn’t take temperatures anywhere,” Dwyer says. “They tried to space the desks six feet apart, but there wasn’t enough room for that.”

One week-long stretch in early September brought about 80 coronavirus cases a day as more than one of every two COVID-19 tests came back positive. As numbers mounted, Dwyer stayed in his room. By the time the school sent everyone home on September 7, less than three weeks after residence halls opened, the campus had recorded more than 1,060 total cases.

While Dwyer has seen pictures of his classmates at parties on Instagram, the kinesiology major says that most people he knows were staying in their apartments at the time. “I haven’t seen more than maybe five other people that I don’t live with,” he says. Dwyer has since dropped his classes for the semester. He is one of thousands who have done so, as enrollment is down across the country. (James Madison University declined requests for comment.)

Still, Dwyer is indignant toward the widespread blame laid on college students for outbreaks at their schools. Superspreader events, like fraternity parties, might include only a few dozen students, but they can have an outsized domino effect. In society at large, superspreader events can spark infections in communities. As few as 10 percent of infected people are responsible for spreading 80 percent of cases. In colleges, that effect is amplified by a formerly positive trait: the interconnectedness of campus life.

Almost all students are connected by a shared classmate, says Kim Weeden, a social science professor at Cornell University. At a mid-size school like Cornell, 92 percent of the student body is connected by three degrees of separation or fewer, according to a study by Weeden and Benjamin Cornwell, the chair of sociology at Cornell.

(Related: Millennials and Gen Z are spreading coronavirus—but not because of parties and bars.)

“A lot of colleges and universities spend an enormous effort trying to connect students to each other across interests, across class lines, across all sorts of lines,” Weeden says.

People at a university are so interconnected that, without any preventative measures in place, it is likely that every student and staff member at a mid-size university of 20,000 students would catch coronavirus within a single semester, even if the school had no cases when the semester began. We know that because Philip Gressman, a mathematics professor at the University of Pennsylvania, and Jennifer Peck, a professor of economics at Swarthmore University, put various campus coronavirus scenarios to the test in a new mathematical model.

“If everything goes right,” Gressman explains, “if there’s a low level of transmission in the surrounding community, if all the students are wearing masks basically all the time, if you’re cutting large classes to limit crowd size, if you’re doing a robust testing and contact tracing program—the combination of all of these things and a little bit of luck works, even if students are still taking classes in person.”

In the real world, though, everything seldom goes right. Students can only control their own actions, and even the university can’t regulate transmission in the community that surrounds them. Of the colleges that haven’t experienced major coronavirus outbreaks, “many of those places have had the advantage of being relatively isolated,” explains Sarah Fortune, a professor of immunology and infectious diseases at the Harvard T.H. Chan School of Public Health.

By isolation, Fortune doesn’t mean a school has to be in a rural area. Rather risk can vary based on how freely people from the community move on campus. Schools situated in what Fortune calls porous communities, where there is more movement between the school and the surrounding area, have faced the threat of more serious outbreaks. If a college is less porous and it has established a solid testing program to help keep it COVID-free, then the student body could, in theory, be more relaxed, says Fortune. “The places that are more porous, where there is definitely transmission into the campuses from the outside community, these are the places that have to attend much more behavioral risk mitigation strategies.”

Both Cornell’s mathematical model and Fortune’s research suggest a testing scheme that rapidly reacts to the presence of COVID-19 is the best strategy for controlling the spread of coronavirus on campus and in the world at large. Those kinds of decisions come from the top.

Solving problems before they happen

College officials can help prevent coronavirus cases among their student body—even when no one is on campus. In North Carolina, sophomore Ashleigh Fields continues with her studies online, far from the nation’s capital and Howard University, where she is enrolled. Other than track practice, during which she leaps borrowed hurdles in a nearby field, the journalism major has stayed focused on her academics and freelance writing. She’s eager to return to her school and the District of Columbia in the spring.

“Howard is very lively,” says Fields. “You never truly have to go looking for an opportunity because one will approach you. You could be talking to your friends and meet someone creative who’s making a movie, and then they want you as an actor.”

Even with her excitement to rejoin campus life, Fields knows that it might not be possible with the pandemic going on. As a historically Black university situated in a metropolis of about 700,000 people, nearly half of whom are people of color as well, Howard University has a unique risk profile. Black Americans who contract COVID-19 are more than twice as likely to die than their white counterparts. The school’s administration has taken that into account for every aspect of its pandemic strategy.

“Given our student and faculty population, we would have to be very careful,” says Howard University’s president, Wayne A. I. Frederick, about the potential for on-campus activities. “If we don't feel we could do that safely, we will not bring them back to campus until there’s widespread distribution of a vaccine, which would be the ultimate way to decrease the spread of the virus.”

(Related: Dozens of COVID-19 vaccines are in development. Here are the ones to follow.)

Howard’s decision to go fully online came with a great deal of planning as well. The school made sure students with economic insecurity could stay in the apartment complex near campus, and they have kept the campus food pantry open through the crisis given most Howard students hail from the surrounding area. Securing these necessities helps the students focus on their studies and reduces their exposure to the coronavirus by lowering their need to travel outside the home for public resources, such as WiFi access at a cafe. As of now, only 39 of Howard’s roughly 10,000 students have tested positive for coronavirus.

Although the school’s strategy differs from Sarah Lawrence’s in several major ways, one factor is the same: their thorough organization. Both schools researched their student populations, relied on science, and shared clear public health messages that told their students exactly how to guard themselves and their classmates against the virus.

“A college administration’s actions are hugely important,” Fortune says. Despite appearances, the number of coronavirus cases at most colleges remains low. At schools that have successfully stifled transmission, like her own Harvard University, she says, they “have a whole public health infrastructure. You just cannot believe the commitments that they have made to public health and the health of their communities.”

Editor’s note: This story was updated to reflect the latest case data for U.S. colleges and universities. It was originally published on November 5.