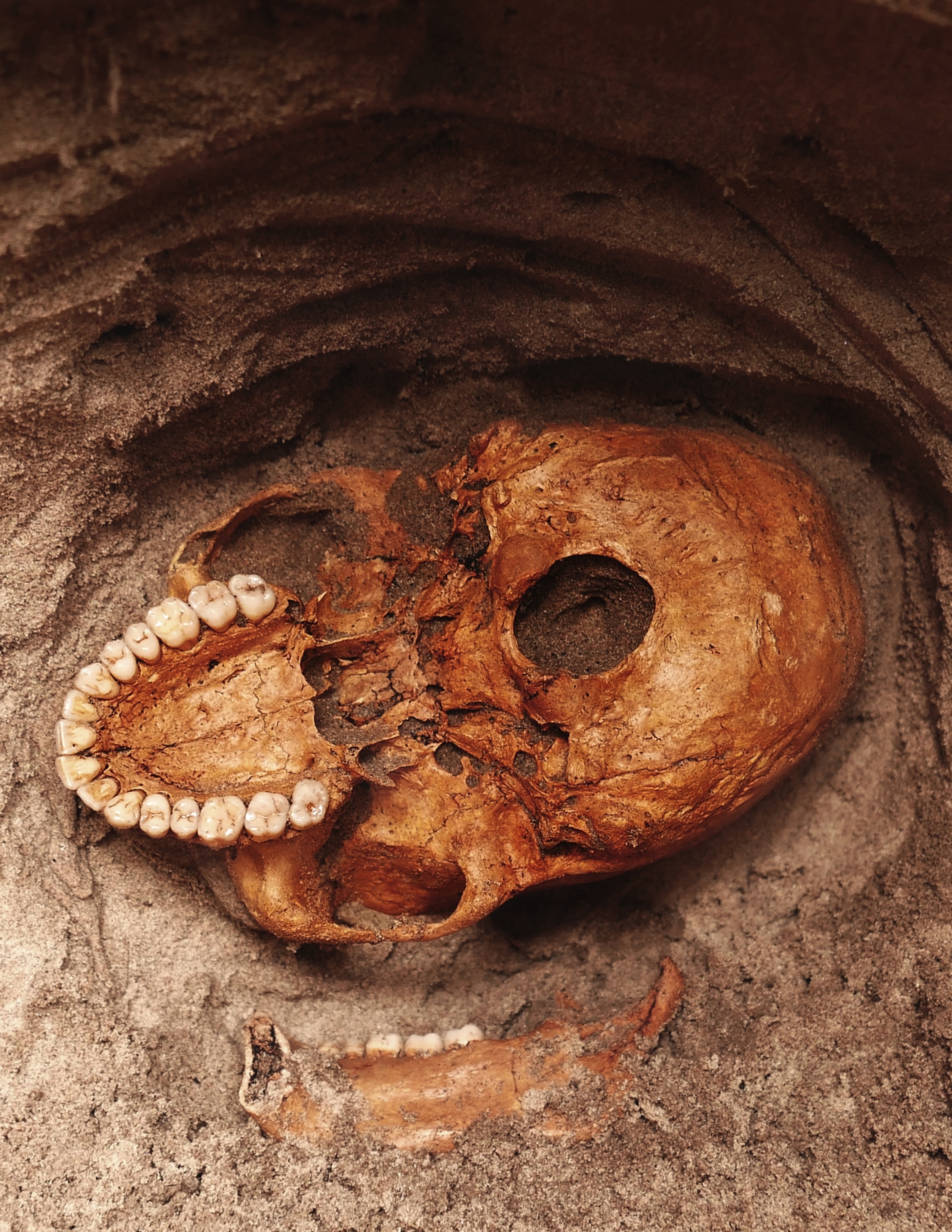 A great wave submerged an ancient fishing village in present-day Tanzania, prompting researchers to revisit the risk of tsunamis on Africa’s east coast.

A human skull peeks out from the gray sand along Tanzania's Pangani River, at the site of what was once an early Swahili fishing village. About a thousand years ago, a tsunami suddenly destroyed the village and killed many residents.
Photograph by Vittorio Maselli

A thousand years ago, a thriving early Swahili village bustled on the banks of Tanzania’s Pangani River, a few miles inland from the Indian Ocean. Residents built their houses out of wood lattices daubed with earth. They filled their nets with fish and crafted beads from shells. Their ceramics were plain and functional.

And then one day, a tsunami barreled in, triggered by an earthquake on the other side of the Indian Ocean.

New research, funded by the National Geographic Society and published today in Geology, describes a macabre rarity in the geological record. The villagers evidently had no chance to escape the torrent that overtook them. Many drowned in their razed homes and were buried in the wreckage. As far as the study’s authors know, the Tanzanian site is the first—and oldest—tsunami deposit bearing human remains found in East Africa. The oldest such deposit with human remains in the world, found across the Indian Ocean in Papua New Guinea, is 7,000 years old.

The Tanzanian site adds a crucial data point in the study of Indian Ocean tsunamis, which can prove devastating. Even though large tsunamis in the region occur relatively infrequently, about once every 300 to 1,000 years or so, they do happen—and in East Africa, the stakes are high. Tanzania’s economic center Dar es Salaam, which sits on the coast, is one of the world’s fastest-growing cities. United Nations projections forecast that Dar es Salaam will become a “megacity” with more than 10 million residents by 2030 and may exceed 70 million by the end of the century. (Find out more about the rapidly growing Dar es Salaam—and how its planners are trying to keep up.)

East Africa got lucky in 2004, when a tsunami triggered by a huge earthquake off the coast of Indonesia killed more than 227,000 people. The bulk of the damage and fatalities from that tsunami occurred in South and Southeast Asia. The waves also made their way to the shores of East Africa, but the first wave made landfall on the continent during an extreme low tide, mitigating its impact.

The tsunami that occurred a thousand years ago, however, was a different story. “It doesn’t seem to have been that big of a tsunami, but if people are living on low ground, and they have no idea what’s coming, it’s probably the worst situation,” says Jody Bourgeois, a sedimentologist and tsunami specialist at the University of Washington who reviewed the new study before publication. “There’s no earthquake to warn you, because you’re on the other side of the Indian Ocean.”

Despite the potential for Indian Ocean tsunamis to reach East Africa’s shores, the region’s tsunami risk hasn’t been studied much. The Tanzanian site is one of only a handful of known East African tsunami deposits from the past 12,000 years. “This kind of information needs to be known by governments and by the population,” says lead study author and National Geographic Explorer Vittorio Maselli, a geologist at Canada’s Dalhousie University.

Maselli started studying the thousand-year-old tsunami in the spring of 2017, while he was working in the University of Dar es Salaam’s geology department. By chance, he found out about the work of archaeologist Elinaza Mjema, also at the University of Dar es Salaam, who had been working at a site 95 miles to the northwest, near the town of Pangani. An early Swahili fishing village, the area once abounded with beads and ceramics, and the university used it to teach proper archaeological field techniques.

But when Mjema took students there in 2010, test pit after test pit revealed human bone. “Every student was going: Teacher, there is a skeleton,” he says. “It was a surprise.”

Mjema returned to the site in 2012, 2016, and 2017, and his further excavations found bodies that were randomly oriented in the dirt—including one with intact iron bracelets around its ankles. War and disease didn’t seem to account for the village’s sudden demise. No cut marks or signs of illness were on any of the bones. By the looks of it, the village’s men, women, and children had drowned and were buried in the shattered remains of their homes.

A team of researchers including Maselli and study co-author Andrew Moore, a sedimentologist at Earlham College in Richmond, Indiana, visited the site in 2017 to take more sediment samples. They were facing a race against time. The University of Dar es Salaam had begun digging holes on the property to make fish ponds to teach aquaculture, destroying some of the archaeological site in the process. The researchers dug their trenches along the ponds’ margins and collected whatever they could. “Within about three months’ time, maybe less, they were going to fill those ponds with water,” Moore says. “Some of this was very much salvage geology.”

The sand that buried the village contained the remains of fish, rodents, birds, amphibians, and even the shells of small marine mollusks—a sign that water had washed in from the Indian Ocean, several miles downriver. And wherever the researchers dug, they kept finding more human bones. “Sometimes, it was kind of emotional—we needed to think about the science, but in the meantime, we were working with the people who died there,” Maselli says.

Radiocarbon dating of charcoal and bone in the deposits confirmed that the flooding event happened about a thousand years ago. Tsunami deposits from around the Indian Ocean also date to that time, suggesting that an event similar in scale and intensity to the 2004 tsunami occurred a millennium ago.

Computer simulations found that an earthquake along the Sunda megathrust—the fault off the coast of Indonesia that triggered the 2004 tsunami—could have formed big enough waves to explain the Pangani deposits. The Pangani River’s funnel-shaped bay would have amplified the tsunami waves as they raced upriver, making the flooding at the site even more destructive.

“If we go to other places around Africa that saw 2004-like events ... would we find this ancient event writ in the rock history?” Moore wonders.

The research team hopes their study will motivate work to assess the tsunami risks facing East Africa. In particular, more detailed mapping of the region’s ocean floor is needed, Maselli says. Just like mountain ranges channel the flow of air, the ocean floor’s topography affects the movement of waves and currents. And tsunamis don’t just come from earthquakes; they can be triggered by underwater landslides, too.

“The United States has a huge program for mapping the entire shelf and slope all along the Atlantic coast for understanding landslides,” Maselli says. “We don’t know for East Africa.”

As for the ancient community, Mjema’s archaeological work shows signs of post-tsunami renewal. Within 50 to 100 years, people were building atop the flood deposits. Even today, building in the area continues. Though local officials have started moving construction out of the lowlands, Mjema says, recent buildings have been erected on old tsunami deposits along the Pangani River. Will these communities be prepared for the next possible catastrophe?

“We can learn a lot from the past, if we really want to understand what we are facing,” Mjema says.