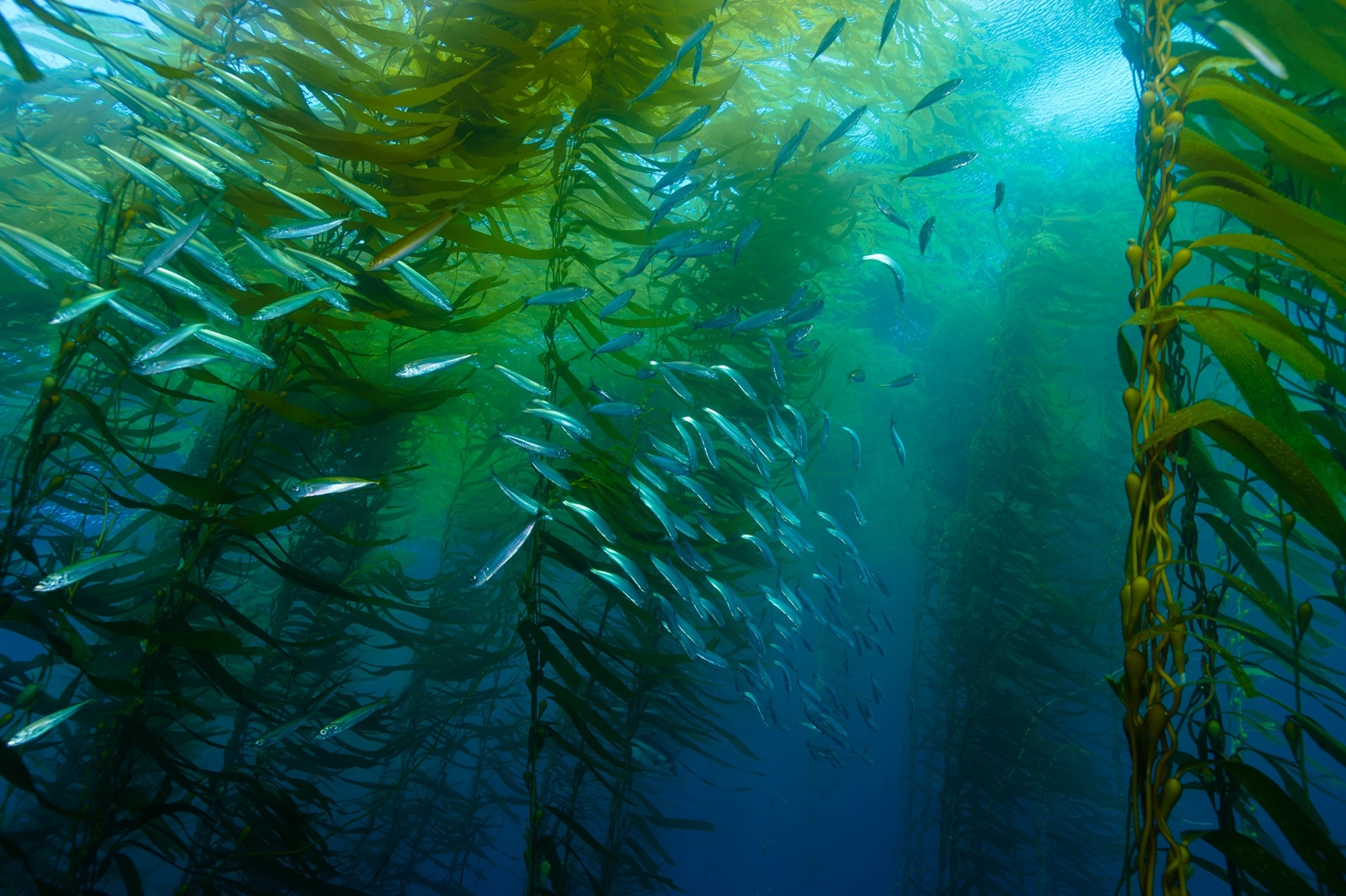 California’s critical kelp forests are disappearing in a warming world. Can they be saved?

The “sequoias of the sea” suck up carbon and shelter special species. They’ve been hit hard, but scientists, surfers, and more are banding together to save them.

Kelp need our help. Which is why an unprecedented alliance of scientists, fishers, surfers, entrepreneurs, and experts is coming together to revive California’s vital kelp ecosystem, decimated by a warming ocean.

“The California coast without kelp is like the Amazon without trees,” says Tom Ford, executive director of the Bay Foundation, a nonprofit dedicated to restoring Santa Monica Bay and its coastal waters.

Indeed, scientists call these fast-growing underwater forests the “sequoias of the sea” for their ability to store large amounts of carbon dioxide. By absorbing CO2 in the surrounding water, seaweed decreases acidification that can kill marine life. Through photosynthesis, kelp forests boost oxygen levels in the ocean while helping protect the coast from erosion by reducing the speed and size of waves. (See beautiful photos of kelp gardens around the world.)

Kelp forests don’t just play a fundamental role in curbing climate change. Sea otters and some 800 other marine species depend on them, as do fishers in the state’s abalone and red urchin industries, now devastated by a purple urchin population explosion. Gray whales shelter their young in kelp forests. The algae can also be used as biofuel, and when fed to cows dramatically cuts planet-warming methane emissions from their burps. In California, kelp forests shape waves by absorbing some of their energy to produce optimal conditions for surfing, a multimillion-dollar business.

But between 2014 and 2016, a marine heat wave wiped out more than 90 percent of the kelp cover along a 200-mile stretch of California’s north coast. Kelp in some areas of Southern California already had been reduced by 75 percent over the past century due to pollution and overfishing of species that protect kelp ecosystems.

“Just like the coronavirus is requiring an interdisciplinary, multipronged attack using all our wits, I think that same mentality is going to help deal with climate change impacts, and in this case, kelp forest decline,” says Laura Rogers-Bennett, a marine scientist with the University of California, Davis, and the California Department of Fish and Wildlife, whose research has documented the kelp die-off.

The red abalone fishery is closed down until 2021 in hopes that the snail population would rebound. Many coastal communities are suffering from the closure.

The research vessel Xenarcha is about 10 minutes out of the Port of Los Angeles on an overcast March morning. A gray whale breaches off the boat’s bow, its tail sending a spray of seawater skyward. The 28-foot boat belongs to the Bay Foundation, which has restored nearly 53 acres of Palos Verdes Peninsula’s kelp forests since 2013.

That’s a fraction of the 2,500 acres of seaweed estimated to exist a century ago. But it’s a huge increase since the late 1960s, when kelp had become all but extinct in that area.

Rough water gives way to the glassy calm of Honeymoon Cove and its eight acres of giant kelp, roots anchored to rocky reefs some 18 to 30 feet below.

For decades, this cove was largely devoid of life, devastated by seaweed-eating purple urchins. The urchins resemble small, spikey balls and are a natural part of kelp ecosystems. But when the predators that keep their numbers in check disappear, the population booms and can quickly consume a kelp forest, creating what is called an urchin barren. Once their food is gone, the urchins, which can live for more than 50 years, lower their metabolism and essentially hibernate.

Over the past half century, overfishing and pollution killed off sheepshead fish, abalone, and other marine animals along the Los Angeles Coast that either preyed on purple urchins or competed with them for habitat. Commercially valuable species like the red urchin also vanished once their only food source, kelp, was lost. And most purple urchins aren’t marketable because their only edible parts, their gonads, are considered too small.

Before kelp restoration began in 2013, Honeymoon Cove was “a complete barren, with densities of urchins approaching 70 per square meter,” says Ford.

The Bay Foundation now hires out-of-work red urchin divers to methodically cull the purples by smashing them with hammers.

Also on the boat is Kevin Whilden, executive director of Sustainable Surf. The nonprofit is working to get surfers, surfing fans, and the consumer brands they patronize to finance restoration of kelp forests through its SeaTrees program.

Individuals can donate to pay for restoration of kelp forests, mangroves, and seagrass meadows, or by purchasing products from SeaTrees’ partners. Buy a pair of shoes made by SeaVees, for instance, and the Santa Barbara company will underwrite replanting of a square foot of kelp, which adds up. Since the program launched last year, SeaTrees has planted 115,000 mangroves in that program.

“We're using surfing as a way get everyone involved in kelp restoration,” says Whilden.

The Bay Foundation’s Ford pilots to a spot called White Point, where SeaTrees will fund removal of a 3,200-square-foot patch of urchin-infested reef as part of a reforestation project set to begin in the fall.

At the UC Davis Bodega Marine Laboratory on the Sonoma County coast, Rogers-Bennett has been testing methods to “ranch” starving purple sea urchins, about 20 percent of which are big enough to be collected by divers and fattened up in tanks with a special feed.

The UC Davis scientists are collaborating with a Norwegian company called Urchinomics that plans to sell ranched urchins to high-end sushi and seafood restaurants.

While the volume to be harvested for Urchinomics may not have a significant impact on purple urchin populations, keeping divers employed would, notes Rogers-Bennett. They need to keep their skills sharp for government-funded kelp restoration projects, including one set to begin this summer off the Mendocino County coast, north of San Francisco.

“We’re geared up to do this. We have the boats, we have the equipment, and we need the work,” says Grant Downie, a 31-year-old red urchin diver in Fort Bragg, California.

Around Catalina Island, about 30 miles off Los Angeles, University of Southern California scientists are working on harnessing the extraordinary growth of some strains of giant kelp—2 feet a day in ideal conditions—for harvest as a biofuel.

In a 110-day trial, an experimental triangular-shaped structure of PVC pipes moored to a solar-powered buoy, called a kelp elevator, lowered seaweed fastened to it to depths of 260 feet at night to absorb cold-water nutrients. In the morning, the elevator returned the kelp to the sunlit surface.

Water at those depths is richer in nutrients; seaweed riding the kelp elevator grew three times faster and weighed four times more on average than kelp at a control site, according to Diane Kim, associate director of special projects at USC’s Wrigley Institute for Environmental Studies.

Large-scale offshore kelp farming could amplify a crucial function of kelp ecosystems: carbon sequestration. In a 2019 study, scientists found that farming just 3.8 percent of federal waters off the California coast could offset the emissions from the state’s $50 billion agriculture industry.

And the research into kelp reproduction could help develop strains suitable for regrowing coastal kelp forests.

The return of the abalone

Back at Honeymoon Cove, Heather Burdick, director of marine operations for the Bay Foundation, uses a long pole to scoop up kelp, which she stores in a cooler, to be used as food for abalone being raised in the organization’s portside lab.

Vanquishing purple urchins and bringing back the kelp alone won’t restore a complex ecosystem; every former resident possible must be returned. And so Burdick and her colleagues have been seeding the abalone in restored kelp forests like this one. Last November, the Foundation and its partners placed 3,200 white abalone in restored kelp forests and are planning to release 800 to 900 more this fall.

“Abalone play a critical role in the kelp forest,” says Rogers-Bennett, noting that the grazers clean reefs, which attracts other marine life—including predators of purple urchins—to the seaweed ecosystem.

Meanwhile, the California Ocean Protection Council’s (OPC) new strategic plan to restore kelp statewide is planned to start over the summer, though COVID-19 may slow things down. The goal is to create a network of kelp refuges that can seed other areas and to begin monitoring the coastline for changes in kelp cover. “Preventing local extinction is key to future success,” says Rogers-Bennett.

“I think we have a shot here,” says Michael Esgro, OPC’s marine ecosystems program manager. “But there is this race-against-time component, and the longer those urchin barrens persist—and if we get hit with marine heat waves—we could be in even deeper trouble.”