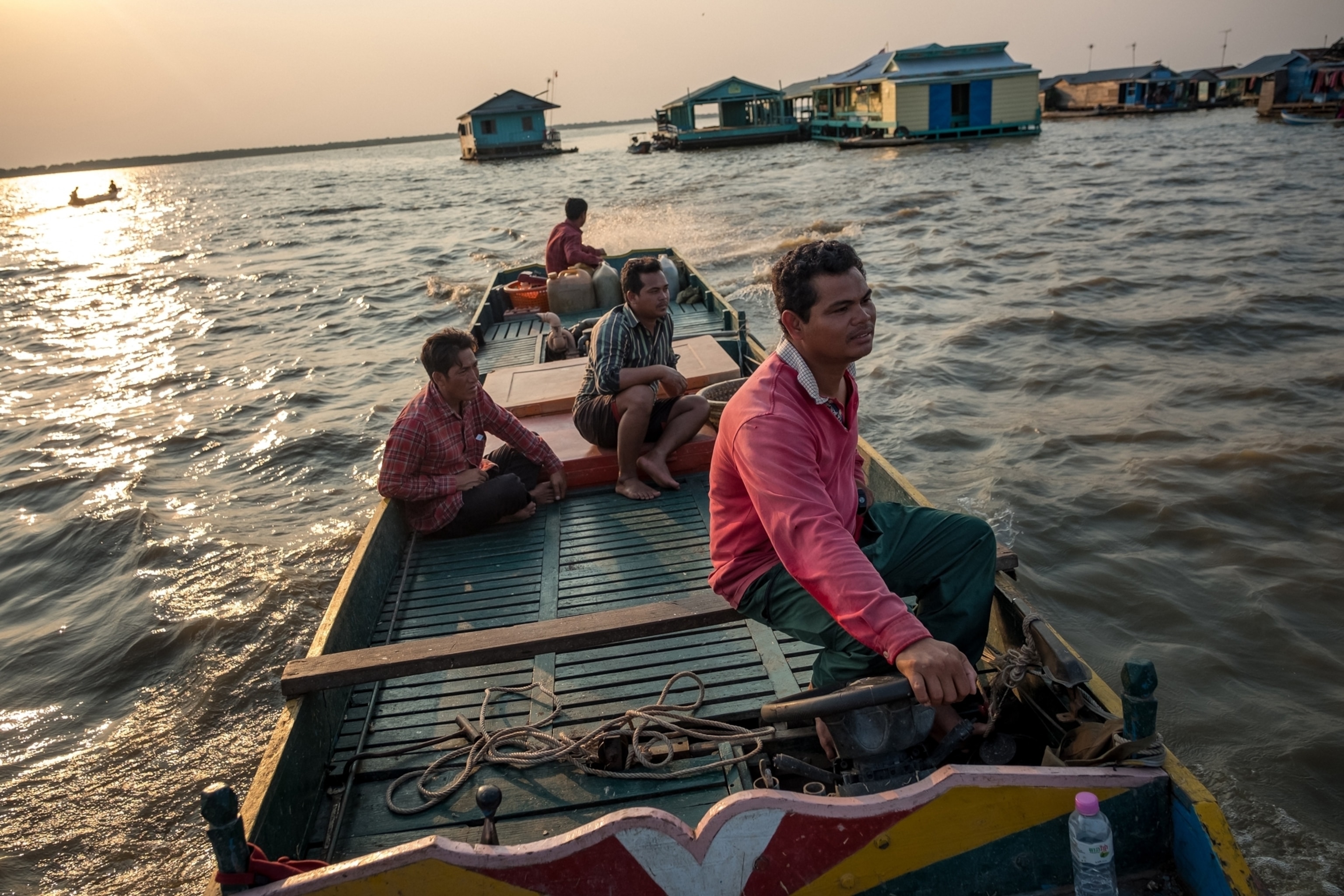 Cambodia’s biggest lake is running dry, taking forests and fish with it

A fishermen drives past a floating village on Tonle Sap. Many residents that live on the lake are experiencing drought and diminishing water levels, and are abandoning fishing for farming in the increasingly dry swamp forest around the lake.

Hun Sotharith recalls when he moved to Cambodia’s Tonle Sap to become a fisherman. It was the early 1990s, and the lake's freshwater swamp forest where he fished was so dense that it could take Sotharith, a former soldier, a day and a half to find the way back to his floating village.

Back then, during the six-month rainy season, the vast wetland became a place to feed, breed, and hide for a wide diversity of fish, including the critically endangered Mekong giant catfish. “Everywhere was forest, and fish was abundant,” says Sotharith.

Today, only remnants of that forested water world remain in Koh Chivang, the five-village district on the northwestern end of the lake where Sotharith is now deputy chief. A fire in the 2016 dry season burned 80 percent of the district’s flooded forest, destroying critical fish habitat and causing many of the 13,000 residents, who live in floating houses, to abandon fishing; they now grow chili and other crops.

A similar story plays out around Tonle Sap, Southeast Asia’s largest lake and the center of the world’s most productive inland fishery. In many places, where native forest once grew from the lakebed, drab, dry, treeless farmland—yet to be inundated by the floodwaters that in recent years have arrived late—now stretches as far as the eye can see. Fires, often lit deliberately to clear land for agriculture, has further reduced the flooded forest.

Many conservationists now warn that Tonle Sap, a UNESCO Biosphere Reserve, faces an existential threat. Further deforestation and environmental degradation have the potential to inflict devastating economic damage to the nearly one million Cambodians living around the lake and the many millions more who depend on it for fish—the country’s primary source of protein.

A government fish farm grows giant barb fish. Fish nurseries in the flooded forest around Tonle Sap are in trouble as drought and tree deforestation destroy their habitat.

A military policeman looks for illegal loggers in the sanctuary.

While other areas, such as Prey Lang, a nature reserve in central Cambodia and one of Southeast Asia’s last remaining lowland evergreen woodlands, have suffered high deforestation—often because of illegal logging underpinned by government corruption—the greatest loss proportionally has occurred in the Tonle Sap floodplain forest, according to a study published recently in the journal Water. It shows a 31 percent loss of flooded forest since 1993.

Other studies have shown that flooded forests hold more potential for carbon absorption than dry forests, meaning they could help mitigate the impacts of climate change by removing large amounts of carbon dioxide from the atmosphere and storing it.

“This is concerning, because there is so little flooded forest” in Cambodia compared to other types of forest, and “the flooded forest plays such a strong role in aquatic system health,” says the Water study’s lead author, Sapana Lohani, an environmental scientist who is affiliated with a USAID research project called Wonders of the Mekong.

Zeb Hogan, a fish biologist at the University of Nevada, Reno, and a National Geographic Explorer who has worked in the region for decades and leads the USAID project, says: “We’re seeing the destruction of a unique ecosystem, with the tragic loss of wildlife, loss of fisheries, and loss of livelihoods for a huge number of people.”

Before the mid-twentieth-century, Cambodia was prized for its lush interior. Although smaller in land area than neighboring Thailand and Vietnam, the nation had more intact forest. But as the country emerged from its civil war and the economy began to grow in the early 2000s, so did deforestation rates. A government scheme that turned more than 10 percent of the nation’s territory over to foreign-owned companies, mostly rubber plantations, led to widespread environmental destruction.

Even after that program was suspended in 2012, deforestation in Cambodia continued to rise. According to Global Forest Watch, an online monitoring initiative of the World Resources Institute, Cambodia lost a quarter of its total tree cover—more than five million acres of forest—between 2001 and 2019, the highest rate of any Asian country and much higher than Brazil, for example.

Cleared forests in Preah Vihear Province, in northern Cambodia near the border with Loas. The South East Asian country has one of the fastest rates of deforestation in the world; it's estimated that only 3 percent of primary forest remains.

A rubber plantation in the Beng Per Wildlife Sanctuary, in northern Cambodia. Most of the sanctuary's land has been sold by the government.

The ecological richness of Tonle Sap is sustained by an annual pulse of water that enters the lake during the June–November rainy season from the Mekong and other rivers. When the surrounding forests are inundated, Tonle Sap can expand more than five times its dry-season size. So productive is the fishery that more fish are caught here annually than in all of North America’s rivers and lakes combined.

But things are no longer normal in the Tonle Sap area. Years of overfishing have dramatically reduced catch sizes, though it’s impossible to know exactly by how much since the Cambodian government is reluctant to release reliable figures.

And now, the whole system appears to be running dry. Since last year, water levels throughout the Lower Mekong River Basin have dropped to historical lows, the result of drought and water being withheld by Chinese-built hydropower dams far upstream. This year, the flood pulse that should have arrived by now has not. The water level in Tonle Sap is lower than it was last year at this time, according to the sole recording station that the Mekong River Commission monitors (it is located where the Tonle Sap River flows into the lake).

The dry conditions leave the normally flooded forest exposed to further logging and human-caused fires, both accidental and intentional. In 2016, massive fires burned as much as a third of the 750,000 acres of flooded forest in the Tonle Sap region. This year, the fires began in February. Although not nearly as extensive as in 2016, they burned through large swaths of previously untouched forest, and continued to burn in some places even after the first rains arrived some two months ago.

It’s not just fish that are threatened by the loss of the flooded forest, but also turtles, reptiles, and an array of critically endangered species, including the hairy-nosed otter, one of the least known otter species in the world. Many of these animals have been burned out of their habitats, such as Germain’s langurs, a threatened monkey species, several of which were seen hanging entangled in the charred trees.

Prek Toal is an internationally recognized bird sanctuary in the northwestern corner of Tonle Sap. Home to the largest water bird colony in Southeast Asia, with an estimated 100,000 breeding pairs, it protects many species of egrets, ibises, and cormorants, a small population of extremely rare greater adjutant storks, and the only colony of spot-billed pelicans in Southeast Asia.

The fires in 2016 burned almost 20,000 acres in Prek Toal, a third of the reserve. They did not, however, kill a significant number of birds, which were able to move into safe habitat. This year, the site appears unscathed by fire, but conservationists worry that future fires may wipe out more of it.

“We stand to lose everything,” says Simon Mahood, an ecologist with the Wildlife Conservation Society, which helped set up the reserve in the 1990s. “Prek Toal is probably one of the greatest conservation success stories in Southeast Asia.”

The COVID-19 pandemic has wiped out any income that people used to earn from tourists visiting Prek Toal and the famous temples of Angkor, which stand north of the lake. It has also pulled many migrants back from Thailand, a development that observers worry will put extra pressure on the land around the Tonle Sap as more people grow crops.

Already, there appears to be brewing tensions between water-based communities and people living further upland, with reports of “outsiders” coming into flooded forest areas and starting fires—sometimes by dropping smoldering cigarette butts—to clear land for farming or to scare out wild animals that they can kill.

“The upland residents are not easy to talk to,” says Sotharith. “They come with swords and knives, and they can do violence on us.”

In the Koh Chivang, which lies adjacent to Prek Toal, Sotharith estimates that 70 percent of residents, most of whom formerly relied on fishing, have now turned to farming on small plots next to their stilt houses. Chili, which recently has been fetching unusually high prices, is a preferred crop.

“Our people don’t go farming away from home, and we have urged them not to cut any forest,” says Sotharith. “We have learned our lesson.”

Still, conservationists are hopeful that the flooded forest will not be lost. “As a tropical ecosystem, the Tonle Sap is very productive and things grow quickly, so there is potential for some recovery, if the pressures are released,” says Nick Souter, an ecologist with Conservation International. That organization is helping Tonle Sap communities replant their sections of the flooded forest and establish local fire brigades to manage wildfires.

But for some, including Nai Sina, a 24-year-old fisherman in the village of Kampong Prohoc, it may be too late. Sina, who has been fishing for the past eight years, says he plans to move abroad to work. If the water rises up as normal, he says, he will come back home to fish. But everything depends on the forest.

“When we have forest,” he says, “we have fish, we have other wild animals, and our natural resources are abundant. When you do deforestation, you have to think about the future.”