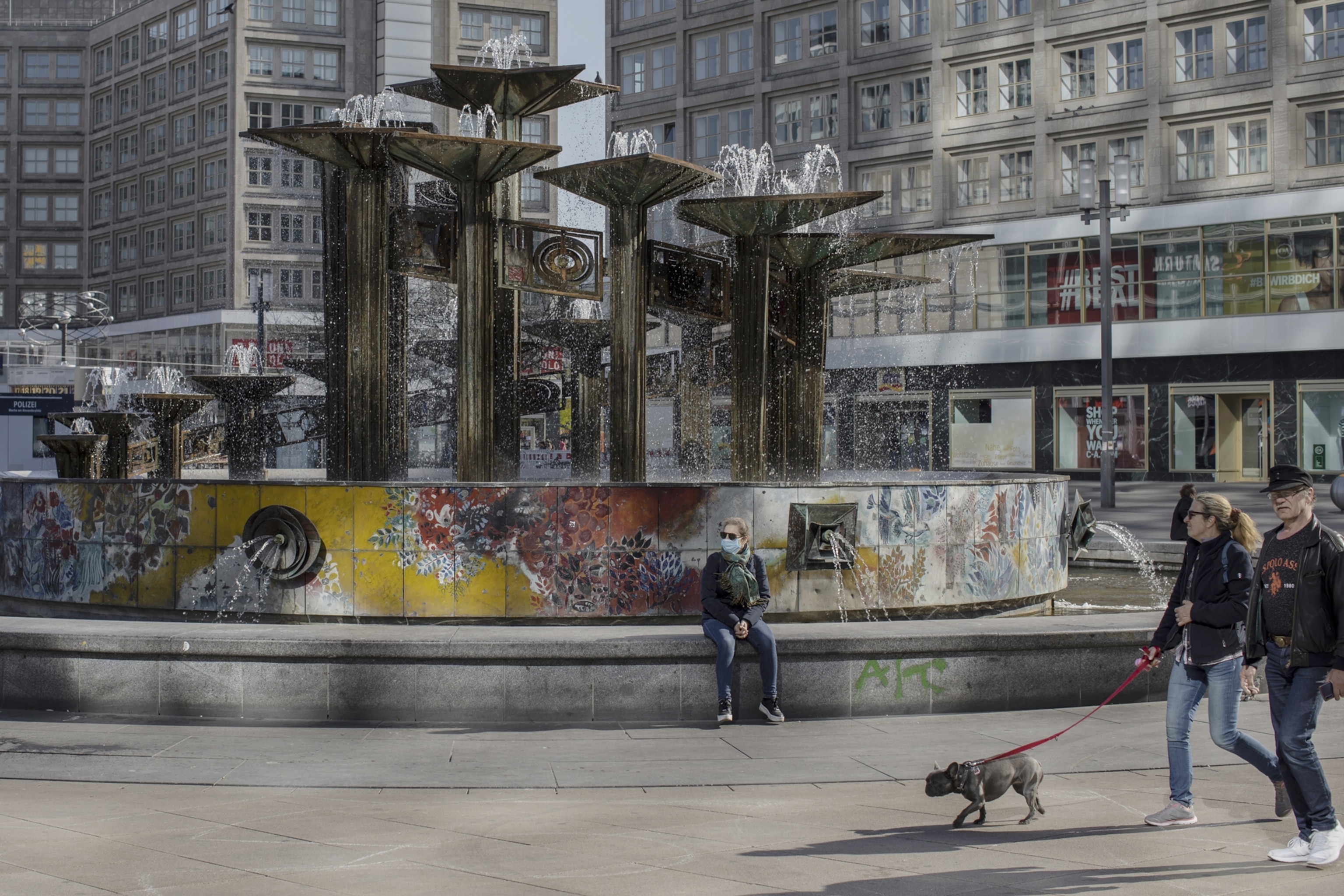 How to measure your nation’s response to coronavirus

Alexanderplatz, a large public square in the center of Berlin, is nearly deserted on Tuesday, April 21, 2020, during the coronavirus pandemic.
Photograph by Emile Ducke, The New York Times via Redux

“Wuhan unexplained pneumonia.” It’s been four months since this simple phrase appeared on the popular health alert service ProMED-mail, the earliest public warning that the novel coronavirus had begun its deadly rampage. Since then, COVID-19 has killed hundreds of thousands across six continents, while sparking a global economic crisis that could rival the worst slowdowns in modern history.

When it comes to managing the spread of this disease, some countries, states, and cities have been faring better than others. Data from Imperial College London and other research groups around the world now showcase the dramatic differences in how countries have been curbing transmission rates within their borders—and which actions have been most effective across the board.

Take Germany versus Sweden. The two countries reported their first cases in late January, within four days of each other. Despite both being wealthy European nations with bountiful health-care resources, Sweden is currently experiencing three times as many deaths per capita as Germany, according to Our World in Data, while Germany is planning its reopening.

Germany was quicker to roll out the first line of defense against outbreaks: containment efforts such as testing, contact tracing, and border restrictions meant to completely stop disease transmission. But it also started what’s known as social mitigation a few days ahead of Sweden, more rapidly adopting measures such as school closures, public event bans, and stay-at-home orders that can slow a disease that’s already spreading. Even now, as of May 1, Sweden is yet to issue a full lockdown.

As the World Health Organization reconvenes its emergency committee three months after declaring a global health crisis, National Geographic reviews the lessons learned from national responses to the COVID-19 pandemic.

Typically, the best weapon in the containment arsenal is a vaccine, which stops a virus before it can multiply inside a person. While the world waits for this preventative medicine, which may not be ready until next year, countries are focusing on other measures, such as testing, isolating sick people, and shutting down borders. But what scientists have learned since January is that COVID-19 often beat these defenses before they could even be established.

Genetics work has revealed the outbreak started at least a month before Chinese hospitals sent their international alert on New Year’s Eve, and we now know COVID-19 can spread before symptoms arise, or with no signs at all.

When the World Health Organization convened on January 22 to discuss whether to declare a public health emergency and ostensibly shut down travel to China, there were only 82 cases and no deaths reported outside of the Asian nation. Yet it was already too late.

“By the time they detected the tip of the iceberg, unfortunately, there were thousands of infections in several cities,” says Alessandro Vespignani, director of the Network Science Institute at Northeastern University in Boston.

In early February, his institute was among several projecting that the coronavirus had escaped China before Wuhan was locked down on January 23. Subsequent research has now backed those early models, as data published last week in Nature shows 11.5 million people left Wuhan between January 1 and January 24, mostly as part of the large migrations for the Lunar New Year. These travel restrictions also failed because most countries focused on incoming foreign nationals, and the earliest known cases in several countries have since been traced to citizens returning home from overseas.

“In a sense, travel restrictions are always chasing an invisible enemy,” Vespignani says. “They are an important piece of slowing down the virus, but unfortunately for [a] disease like COVID, it’s very tough to prevent the spreading.”

The WHO took an additional eight days after its initial meeting to declare a global health emergency. At a May 1 briefing, National Geographic asked if the committee had any regrets over originally postponing that declaration.

“We’re proud to be WHO, because we always put our lives on the line to save lives,” director-general Tedros Adhanom Ghebreyesus replied, citing how the organization used the intervening days to collect on-the-ground evidence in China. “The world had enough time to intervene.”

To measure a country’s response once COVID-19 arrived within its borders, experts often look at how many diagnostic tests were performed per person. The countries most lauded for taming their outbreaks—South Korea, Germany, Vietnam, South Africa, Australia, and New Zealand—all started with high per capita testing rates. Early evidence also shows that it matters which groups receive the tests, and how often.

“We found that testing was most effective when targeting high-risk groups, like health-care workers,” says Grassly of Imperial College. Health-care workers account for as many as 20 percent of all cases in hard-hit places such as Spain. A recent report from the MRC Center estimates that weekly screening of health-care workers and other at-risk groups could reduce their transmission rates by a third. (Learn why the U.S. coronavirus testing failures were inevitable.)

Yet testing isn’t a panacea, Grassly says, because so much transmission is happening before cases even develop symptoms, if they arise at all. This is why so many new efforts to scale up contact tracing have emerged, either by hiring legions of foot soldiers or through the development of smartphone apps. Aggressive contact tracing combined with widespread testing is how some countries flattened their curves. Once those contacts are found, they need to be isolated and continuously tested until it's safe for them to be released, Grassly says.

“In South Korea, they've done a lot of contact tracing using mobile phone apps,” Grassly says. “A lot of the effectiveness of that program relates to the compliance with using the app, which in some cases is legally enforced.”

However, lessons from one country aren’t necessarily applicable to another. For example, New Zealand announced earlier this week that it has effectively eliminated the virus from its shores, “but it might not have attributes that would fit with New York City or many densely populated parts of the U.S. and Europe,” says Wafaa El-Sadr, an epidemiologist and director of ICAP at Columbia University, an initiative that strengthens health systems in resource-poor countries.

New Zealand has a population of 4.9 million, about half the size of London, spread across a land mass that’s 170 times as large. The island nation is also relatively remote, with international tourism arrivals numbering less than half those of neighboring Australia, according to the World Bank. New Zealand simply didn’t start with an imported outbreak on the scale of the one bearing down on many other nations, including countries with similar populations. Also, eliminating an infectious disease isn’t the same thing as total eradication from a public health perspective, and New Zealand has already reported a handful of new cases since its announcement.

“New Zealand and Germany demonstrate how you can bend the curve and get a sustained decrease in the numbers of new cases over time,” El-Sadr says. “But you also need to see what happens after you start easing some of these mitigation measures.”

Places with early COVID-19 outbreaks suffered so many difficulties with containment methods—like testing, contact tracing, and quarantines—that some countries that lagged behind opted to skip a step and go straight to using social mitigation, such as distancing, school closures, and work-from-home mandates.

“[Many African countries] went directly to mitigation,” says El-Sadr, whose organization has worked with African nations for nearly 20 years. “They believed that containment is not going to work based on [what happened in] Western Europe and the U.S.”

But even these social mitigation measures can vary in effectiveness if people are not reacting to mandates and official guidelines—a factor that can be influenced by cultural norms. In 2008, researchers asked more than 7,000 people from eight European countries to keep diaries of the social contacts they had each day, from kisses and handshakes to in-person conversations. Based on these surveys, the team predicted that it’s more likely a respiratory virus will spread rapidly in certain countries due to differences in social mixing.

“The average number of contacts per day that could lead to disease transmission were 20 in Italy, versus eight in Germany,” says Grassly, who adds that these patterns appear to be holding true for COVID-19.

Tech giants including Google and Apple have begun sharing anonymized smartphone data so public health researchers can assess public responses to mitigation orders, and one surprising trend so far is that people don’t seem to care about emergency declarations.

When Vespignani’s group at Northeastern looked at this mobility data for major U.S. cities, they found that most people kept moving even after city, state, and national emergencies were declared for COVID-19. Many cities saw a gradual decline, with mobility dropping below 50 percent of normal only after full stay-at-home orders were issued.

“What we do as single individuals, our behavior, can change the pattern and trajectory of the epidemic,” says Vespignani.

Mobility data may also reveal which leaders are succeeding with their messaging and convincing people to change their behaviors. New Zealand prime minister Jacinda Ardern has been celebrated for speaking plainly to the public, namely via a regular slate of Facebook Live video streams since late February. When a lockdown was implemented a month later, mobility plunged, suggesting a broad adherence to governmental policy.

Relatable messaging will be fundamental as nations continue through this pandemic, El-Sadr says. If the vaccine takes time and natural immunity wanes, much of the world may experience multiple waves of the virus, where cases ebb and flow. That would mean moving back and forth between periods of pushing containment, and periods of relying on social mitigation.

“What you need is very clear and consistent messages,” El-Sadr says. “People in general are thirsting for this kind of thing. They really want clarity.”

Editor’s Note: This story was updated to include comments from a World Health Organization briefing.