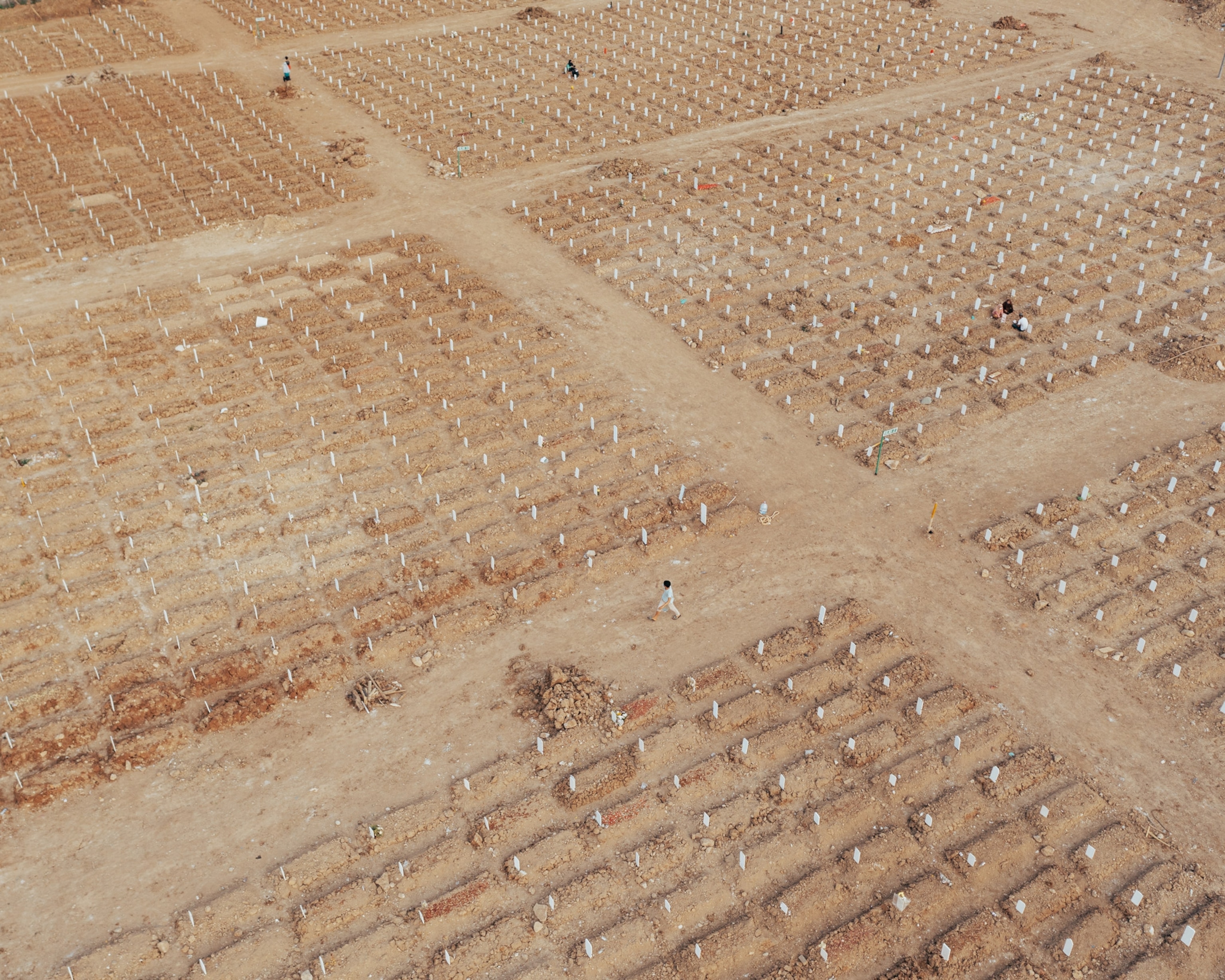 As the world confronts another tragic milestone, experts say the death toll and collateral damage will rise unless vaccines are delivered swiftly.

Aerial view of a COVID-19 victims' burial ground at Rorotan Public Cemetery in Cilincing, North Jakarta, Indonesia on July 21, 2021. This cemetery opened in March and can accommodate up to 7,200 people, but is filling up fast. Jakarta's government is planning to add more land as Indonesia is rapidly becoming the new epicenter of the pandemic.
Photograph by Muhammad Fadli, National Geographic

COVID-19 has now killed more than five million people worldwide. It is yet another grim milestone in a seemingly endless stream of them. In many countries, including the United States, COVID-19 is now a leading cause of death, alongside heart disease and stroke. And yet experts say the pandemic’s true toll is likely much higher.

“It’s quite possible that the number of deaths is double what we see,” says Amber D’Souza, professor of epidemiology at the Johns Hopkins Bloomberg School of Public Health. “But five million is such a staggering number on its own. No country has been able to escape it.”

D'Souza and other experts point out that the official global tally captures only confirmed cases in each country—and standards for reporting deaths vary widely. Some countries lack the robust testing protocols needed to diagnose cases while others may not count people who died because of complications due to COVID-19. In many places, too, people are dying at home because they can’t reach care, and therefore aren’t counted in official death tolls.

The official tally also doesn’t account for COVID-19’s vast collateral damage. Around the world, sick people have refrained from seeking care for fear of getting infected and countries have diverted resources from other critical health-care priorities. For example, the World Health Organization says deaths from tuberculosis have risen for the first time in a decade.

And though death rates are declining after the surge driven by the Delta variant, they remain staggeringly high and will likely continue to climb.

“Tens of thousands of Americans died just in the past month,” D’Souza says, adding that it’s a reminder of how many people are still losing their lives nearly two years into the pandemic despite the availability of highly effective vaccines in the U.S. And she points out, much of the rest of the world remains unvaccinated—and vulnerable.

Who is dying, where, and why

Rebecca Martin, vice president for global health and director of the Emory Global Health Institute at Emory University, says much of the devastation in the U.S. and parts of Europe is because their populations tend to be older with more underlying conditions—diabetes and high blood pressure—that make COVID-19 particularly deadly. Scientists have come to understand that age is a particularly significant risk factor for severe disease.

However, she notes that many low- and middle-income countries with younger populations are seeing waves of death because of weaker health care systems that make it harder for sick people to access life-saving therapies. This is particularly the case in some African countries like Eswatini, formerly known as Swaziland, where many people who live in rural areas don’t have access to health facilities—and where the health facilities that do exist might not have adequate access to oxygen. (Oxygen is a vital medicine—but not everyone can access it.)

And it’s not just the inequities of healthcare systems that drive deaths. Many countries have seen vast racial and socioeconomic disparities in COVID-19 deaths. Christopher Mores, a professor at the Milken Institute School of Public Health at George Washington University, says that poverty has made it impossible for many people in marginalized communities to protect themselves from the virus. Some still need to commute to work to provide for their families while others might not have access to the running water that’s necessary for practicing good hygiene.

“It’s just heartbreaking to see how hard they’ve been hit,” he says. “You’re not able to stay home.”

Researchers are still trying to understand why some regions, such as sub-Saharan Africa, have seen comparatively fewer COVID-19 deaths. Martin points out that many African countries have a relatively younger population, but other factors might be in play from the warmer climate to the possibility that past exposure to other infectious diseases might be providing cross-immunity. But, she says, it could also simply be that COVID-19 deaths aren’t being diagnosed and reported.

COVID-19 has taken lives in indirect ways too. Many of the world’s excess deaths—the number of deaths above the level that’s typically expected each year—are from medical conditions that couldn’t be prevented, diagnosed, or treated because of COVID-19.

“Many healthcare systems are very overwhelmed throughout the world,” D’Souza says. Even in communities that aren’t seeing shortages of oxygen tanks or ICU beds, health care providers everywhere are dealing with staffing shortages due to the physical and mental toll that COVID-19 has taken on healthcare workers.

The pandemic has disrupted efforts to provide preventive care for diseases like tuberculosis, as well as other communicable diseases like malaria, measles, and Ebola. The WHO says in the case of tuberculosis, the pandemic “has reversed years of global progress.” In October, the organization reported that deaths from tuberculosis have risen for the first time in more than a decade to approximately 1.5 million—on par with the levels seen in 2017. Tuberculosis diagnoses also fell by 18 percent in 2020, back to a level last seen in 2012.

Sick people have been discouraged from seeking care for fear of a COVID-19 infection—and when they do seek care, D’Souza says, they might not get adequate treatment.

Then there’s the toll that COVID-19 is taking on families and communities. Although each death is an enormous loss, Martin points to particularly poignant new data showing a rise in children who have been orphaned during the pandemic. A study published in July in The Lancet estimates that 862,365 children in 21 countries had been orphaned or lost a custodial grandparent due to COVID-19. South Africa, Peru, and the U.S. have seen the highest numbers of newly orphaned children.

Where do we go from here?

The rollout of highly effective vaccines raised hopes at the beginning of the year that the world might finally stem the rise of COVID-19 deaths. Nearly seven billion vaccine doses have now been administered globally. But vaccination rates remain extremely low in some countries—due both to vaccine inequity and vaccine resistance.

Countries in Africa have had particular difficulties getting COVID-19 vaccines. As a result, only 8 percent of people across the continent have received at least one dose. Meanwhile, vaccination rates are also low in central and eastern Europe, where misinformation and disinformation campaigns have sowed vaccine hesitancy.

Mores says a low rate of vaccination could be particularly troubling for populous countries like India, where only about 22 percent of the population is fully vaccinated. Despite its devastating surge earlier this year, India’s case and death rates remain surprisingly low. Although undercounting certainly plays a role in that, Mores says it also suggests there are plenty of people left in India who don’t have any immunity from either the vaccines or prior infection—and the virus will eventually find them.

And it isn’t clear how the vaccines will alter the course of the pandemic even in highly vaccinated countries. Much will depend on whether new variants emerge and whether countries continue to enforce public health measures like masking and social distancing.

“I am hopeful that the surges we see this winter will have fewer deaths than we’ve seen in the past,” D’Souza says. “But that’s not a guarantee.” She explains that’s because the virus will continue circulating among the millions of people who remain susceptible in the U.S. and billions of people globally.

The Delta variant has proven to be a particular threat, Martin says, explaining that it is more transmissible and therefore more efficient at infecting new and vulnerable people. But while the existing vaccines are effective against the Delta variant, she and other experts worry that if countries can’t increase their vaccination rates, it could eventually give rise to a variant worse than Delta that will evade vaccines entirely.

“The virus’s goal is to survive,” Martin says. “If we don’t get everybody vaccinated, the pandemic will never end because there will be more and more variants.”

But there are things that can be done to help protect people. Clear communication about the reasons for continued public health measures, like masking, is key to fighting misinformation, says Martin. In places where trust in government is low, she says this message might be better received coming from a source that has gained public confidence.

On a global level, Martin says that countries need to share data in real time so that public health officials can get ahead of the next pandemic before it happens. The attempts of some countries to tackle a highly transmissible virus that knows no borders on their own without such robust collaboration was one of the missteps of the initial pandemic response, Mores says.

We also need more empathy. With each passing milestone, Mores says, it’s important to find ways to feel the losses of people who were parents, friends, and coworkers. “It’s important to not let them just become an ever-growing cold number,” he says. “They need to be remembered as the people we’ve lost.”

D’Souza agrees. “I remember being shocked when 100,000 Americans had died,” she says. “And to think almost 50,000 people in America died from COVID just last month—it just shows how numb we’ve become to the numbers."