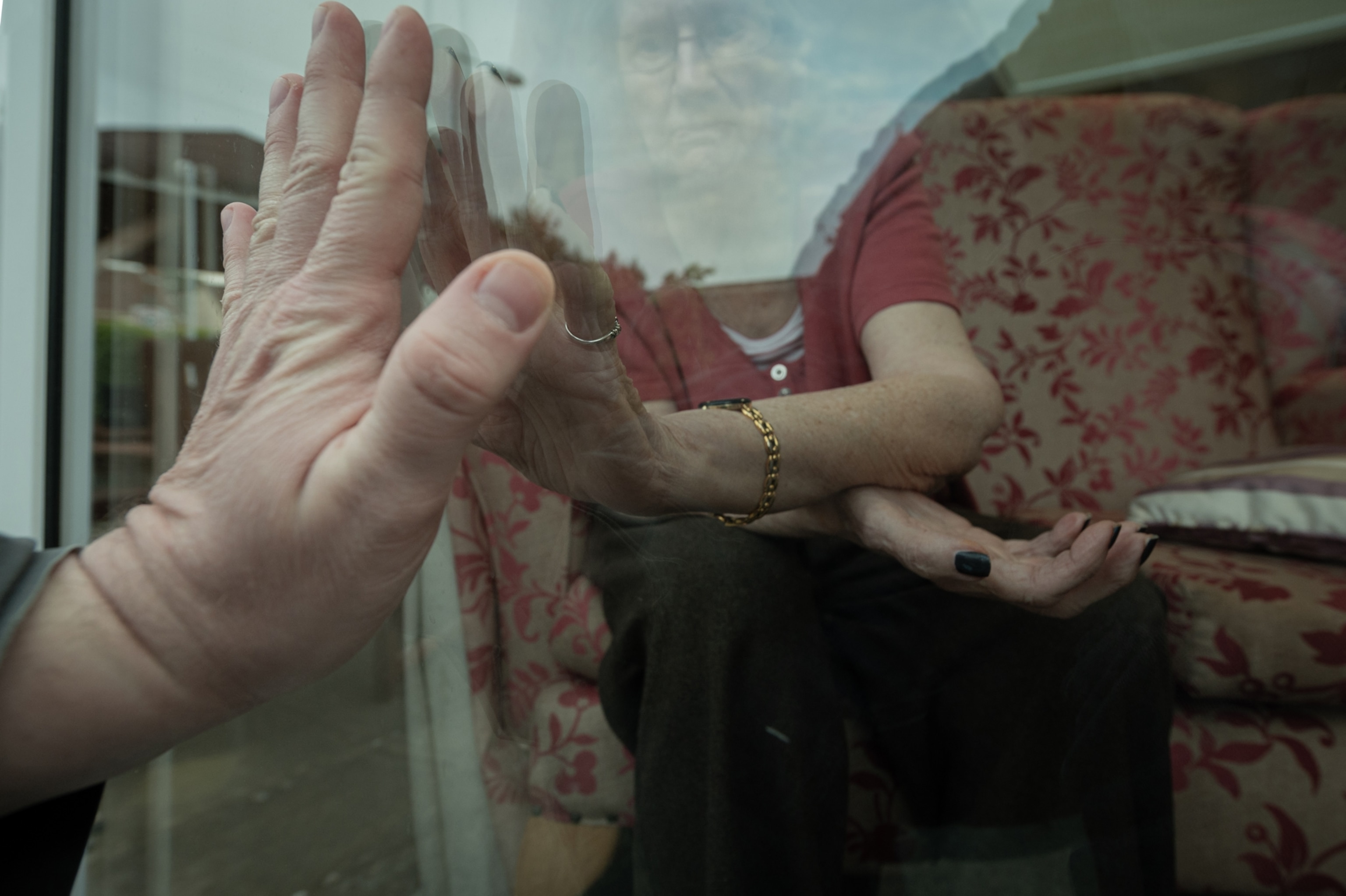 For dementia patients and their families, isolation during the pandemic is a heavy burden

In memory care facilities, patients with Alzheimer's or other forms of dementia have endured extended time alone without understanding why.

An image from photographer Paul Bayfield's ongoing project "Keeping Mum," which is now in its third year. Bayfield has been documenting his mother's life with frontotemporal dementia, which the project will be able to show before, during, and after the COVID-19 pandemic.

When Thomas Shaw visits his wife Lynn, they like to put in earbuds and listen to music from a single iPod. Lynn, a former competitive dancer, has lived in a memory care facility in San Diego since last year, and though early-onset Alzheimer’s disease has taken much of her memory, it has spared her love of music.

But since Lynn’s memory care facility began social distancing in March, Thomas, a 55-year-old retired Navy captain, has been unable to make his daily visits. It has been 11 weeks. Lynn, 60, recently tested positive for COVID-19. She is not showing symptoms, and Thomas is optimistic she will pull through unscathed by the virus. Still, the diagnosis means she is isolated in the facility and it may be even longer until he can see her again.

Like many long-term care residents suffering from dementia, Lynn struggles to comprehend her loved one’s absence. The two speak over the phone, and Thomas receives regular updates from staff, but he worries that her condition will worsen while he’s away.

“She still knows who I am” now, but she won’t as her disease progresses, “so this is time we’re not going to get back,” Thomas says. “I know how this story ends with her.”

Alzheimer’s disease progresses at varying rates, but over time, the degeneration of neurons in the brain leads to an inability to remember or recognize even familiar people or surroundings. Patients with Alzheimer’s or other forms of dementia often need increasing levels of care as the damage to nerve connections advances.

More than 50 percent of the patients in nursing homes and assisted living facilities have some form of cognitive impairment, and the unique challenges of providing memory care in normal times are dramatically exacerbated during the pandemic. The U.S. Centers for Disease Control and Prevention estimated 26,000 nursing home residents and 449 staff in the U.S. have died from COVID-19 as of June 1, although only about 80 percent of nursing homes have provided data. An NBC News tally found that about 40,000 COVID-19 deaths were associated with nursing homes and other long-term care facilities, or about 40 percent of the country’s deaths from the virus.

Across the country, those involved in memory care are struggling to quarantine a population that does not remember they are quarantined. “It’s been truly heartbreaking to see,” says Alyssa Kamp, a speech-language pathologist who works with dementia patients at a handful of facilities in the Kansas City area. “They know their families haven’t been to visit them, but they can’t remember why.”

For a population that is particularly vulnerable to the mental consequences of social isolation, the barring of family visits, group activities, and communal dining in nursing homes and assisted living facilities has taken a unique toll. “The whole issue of isolation is huge right now,” says Doug Pace, director of mission partnerships for the Alzheimer’s Association, a Chicago-based national nonprofit focused on care, support, and research related to the disease. “Loneliness, helplessness, and boredom, we know, is something that, even in normal times, can really affect the quality of life of someone with dementia.”

Nursing homes, which suffered a critical lack of personal protective equipment (PPE) at the beginning of the pandemic, have been hit especially hard. “It’s the kind of work that requires a lot of contact. You can’t distance,” says Lindsay Peterson, a gerontologist at the University of South Florida.

Quarantining such a vulnerable population is difficult for workers and patients alike, but for those with cognitive impairments, such a break in routine can be traumatic. A 2012 study on nursing homes found that evacuations, such as those required in a hurricane emergency, and other breaks in routine can compound dementia patients’ confusion and anxiety, resulting in increased outbursts and aggression.

“People with dementia, they have routines and they can function within their routines because it’s kind of rote,” Peterson says. “When you change everything up, it can completely pull the rug out from underneath them.”

Dementia wreaks havoc on the brain. While the condition comes in various forms, many involve the cluttering of spaces between nerve cells by myriad types of proteins. This clogging gradually damages and destroys neurons involved in cognitive functions such as memory, learning, thinking, and speaking. Dementia is degenerative, worsening over time, and is ultimately fatal, most commonly due to complications from pneumonia or heart disease. There is no cure.

Alzheimer’s is the most common cause of dementia, accounting for 60 to 70 percent of cases in the world. But there are other types. Paul Bayfield, a photojournalist based in Norwich, England, has a mother with Pick’s Disease, a rare, aggressive form of progressive dementia. Bayfield was documenting his mother, Janice, and her life in a memory care unit when the lockdowns and social distancing began.

Now unable to enter the facility that his mother moved into in March, shortly before the lockdown began, Bayfield visits every day for lunch, setting up a table outside his mother’s window. Janice cannot speak, but even through the window, Bayfield notices her confusion. “My main worry is that she is utterly terrified because she’s in an unfamiliar place,” he says.

The possibility of an outbreak is a close-second worry. “Mum’s care facility is the only one in town not to be hit with COVID,” he says. “They lost 15 [residents] last week at the one down the street.”

To maintain routines under lockdown, some facilities have employed creative solutions, such as staging bingo games in hallways, broadcasting morning updates on residents’ TVs, and displaying large photo IDs on their chests while wearing masks. Many facilities, like Janice Bayfield’s, allow “window visits,” but it can still be difficult for dementia patients to connect with their loved ones.

For keeping in touch with family, video chatting has become a common solution, but the screens present their own problems. “For those who have loved ones who are a lot further along in their journey with dementia, who maybe don’t understand what a tablet is or why their loved one is on a screen, or who can no longer communicate or hear well, those are actually proving to be the more difficult interactions,” says Nicole McPherson, who coaches dozens of dementia caregivers in Minnesota for Ceresti Health, a caregiver coaching agency.

Individuals with dementia can react to stress in different and unexpected ways. Upon learning that communal dining was indefinitely cancelled, the father of one of McPherson’s clients began losing the ability to read, a loss the daughter attributed to the stress brought on by the disruptions. When Bayfield’s mother, Janice, is under stress from a break in her routine, she stops eating.

According to Kathryn Hyer, a gerontologist at the University of South Florida in Tampa, the best facilities for dementia patients are ones that practice “resident-centered care” with “consistent assignment,” where the same aides deal with the same residents every day. “They’re much more likely to know if Mrs. Z likes her pillow fluffed, if she prefers a bath at night rather than in the morning, if you can remind her about her grandchildren,” Hyer says.

This story was supported by the journalism nonprofit the Economic Hardship Reporting Project.