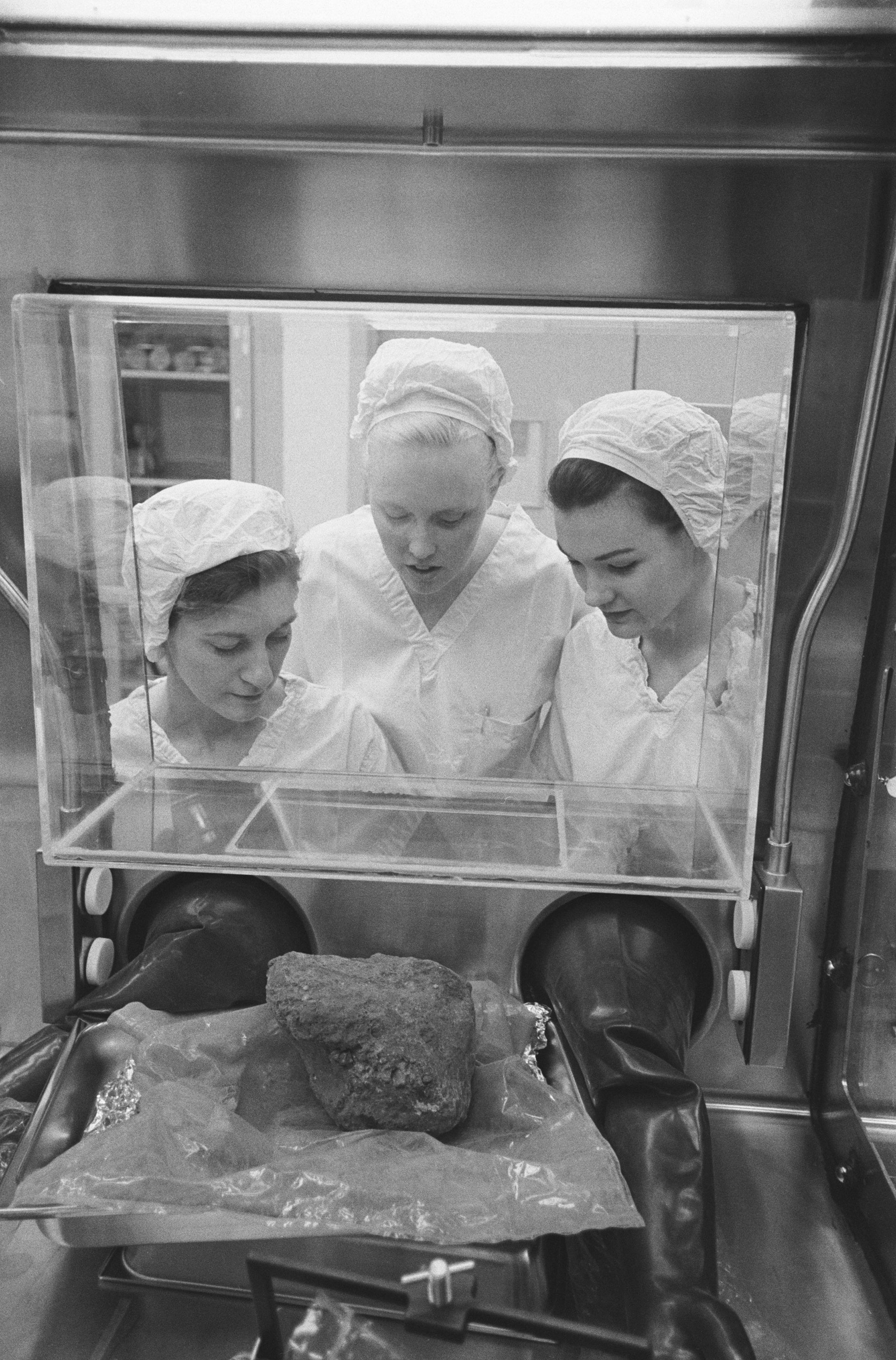 The discovery is either the first of its kind in human hands, or it's evidence that we need to rethink our picture of the lunar interior.

Scientists may have just found the oldest intact Earth rock—on the moon. A study published Thursday in Earth and Planetary Science Letters makes the case that one of the rocks collected by Apollo 14 astronauts in 1971 contains a fragment of Earth's ancient crust, dating back more than 4.011 billion years.

It's possible that the fragment formed in a weirdly water-rich pocket of magma deep within the ancient moon. But the study authors think it's likelier that the rock formed within our planet's crust and got jettisoned to the moon by one of the many meteor impacts that bombarded early Earth.

Earth is the only planet known to maintain life. Find out the origins of our home planet and some of the key ingredients that help make this blue speck in space a unique global ecosystem.

If so, the fragment is one of the oldest Earth rocks ever found. The oldest minerals found on Earth come from Australia's Jack Hills and are up to 4.4 billion years old. But those dates have been disputed, and even if the minerals really are that old, they're debris left over from rocks that disintegrated long ago. By contrast, the Apollo 14 fragment is much more fully preserved.

“It is technically a 'rock,' whereas the Jack Hills [minerals] are individual, contextless crystals,” lead study author Jeremy Bellucci, a researcher at the Swedish Museum of Natural History, writes in an email.

The finding adds to the Apollo missions' decades-long scientific legacy, and it further cements the moon as the solar system's premier archivist. Since the moon is so ancient, airless, and geologically inactive, its surface records the history of impacts in the early solar system—most likely including impact debris sent there from other worlds. It's thought that up to 0.5 percent of the schmutz on the lunar surface first formed on Earth, and bits and pieces of other rocky planets, such as Venus or Mars, probably litter the moon, too.

But the Apollo 14 rock, if confirmed to have earthly origins, would be the first of its kind plucked from the moon and in scientific hands.

“If that’s true, then this is quite a fascinating finding,” says Cornelia Rasmussen, a researcher at the University of Texas at Austin who studies the chemistry of Earth's impact craters. “We don't really have a rock record of this time on Earth, which means [the find] gives us a window to a time we can't really study here.”

Collected by Apollo 14 astronaut Alan Shepard on February 6, 1971, the rock bearing the suspected piece of Earth—formally named 14321—is one of the largest that the Apollo missions brought back from the moon.

The basketball-size stone weighs almost 20 pounds. It's a type of rock called a breccia, sort of a stony collage pieced together from bits of many different, older rocks. The impact that made Imbrium crater, one of the huge dark splotches on the moon's near side, likely forged this larger rock and flung it to the Apollo 14 landing site.

Most of its components, called clasts, are dark in color. But one piece stands out as oddly bright, with a makeup similar to the granites you might find on Earth. To find out where did this outlier bit of 14321 came from, Bellucci's team re-sampled the rock and focused on minerals within it called zircons.

“Zircon is an incredibly hardy, robust, sturdy mineral,” says study coauthor David Kring, a senior staff scientist at the Lunar and Planetary Institute. “So if you are looking for a relic of the most ancient geologic processes, zircon's a very good mineral to begin with.”

When the team analyzed these zircons and the surrounding quartz, they found that the oddball clast formed in conditions that would've been really weird on the moon at the time. For one, the zircons formed in far colder, oxygen-rich magmas than the moon typically has.

In addition, the clast seems to have formed at pressures you'd only find on the moon more than a hundred miles below its surface. But the impact that geologists think formed 14321 probably dug no more than 45 miles into the lunar ground. If the clast formed so deep, how did it get up to the surface?

The researchers soon realized that the clast's head-scratching properties make perfect sense if it instead formed on Earth. About 12 miles beneath Earth's surface, magmas experience temperature, pressure, and oxygen levels just like the ones that formed the mystery clast. When Bellucci made a chart that compared Earth's zircons against the lunar ones, the similarities became clear.

“It was dead in the middle of the terrestrial field, and then I was like, Whoa ... that's awesome!” Bellucci says. “From there, it snowballed.”

Future research on the samples could firm up Bellucci's interpretation. It's also possible that other moon rocks currently in humanity's collection contain flecks of ancient Earth.

“I'm sure we'll find additional samples, and I have a sneaky suspicion that this is going to prompt a lot of other people in the community to do likewise,” Kring says.

Fresh samples from the moon also would help—and may be coming soon. For instance, China's upcoming Chang'e-5 lunar mission is expected to return samples. But for now, work on the Apollo material is grounded. Though U.S. lawmakers have reportedly reached a deal to fund the U.S. government temporarily, the ongoing shutdown has derailed many scientists' lives—including those of the study authors.

As of Thursday evening, Kring says, “my institute is going to be shutting down at the end of tomorrow. We’re not going to be able to do the exciting science that this discovery illustrates.”