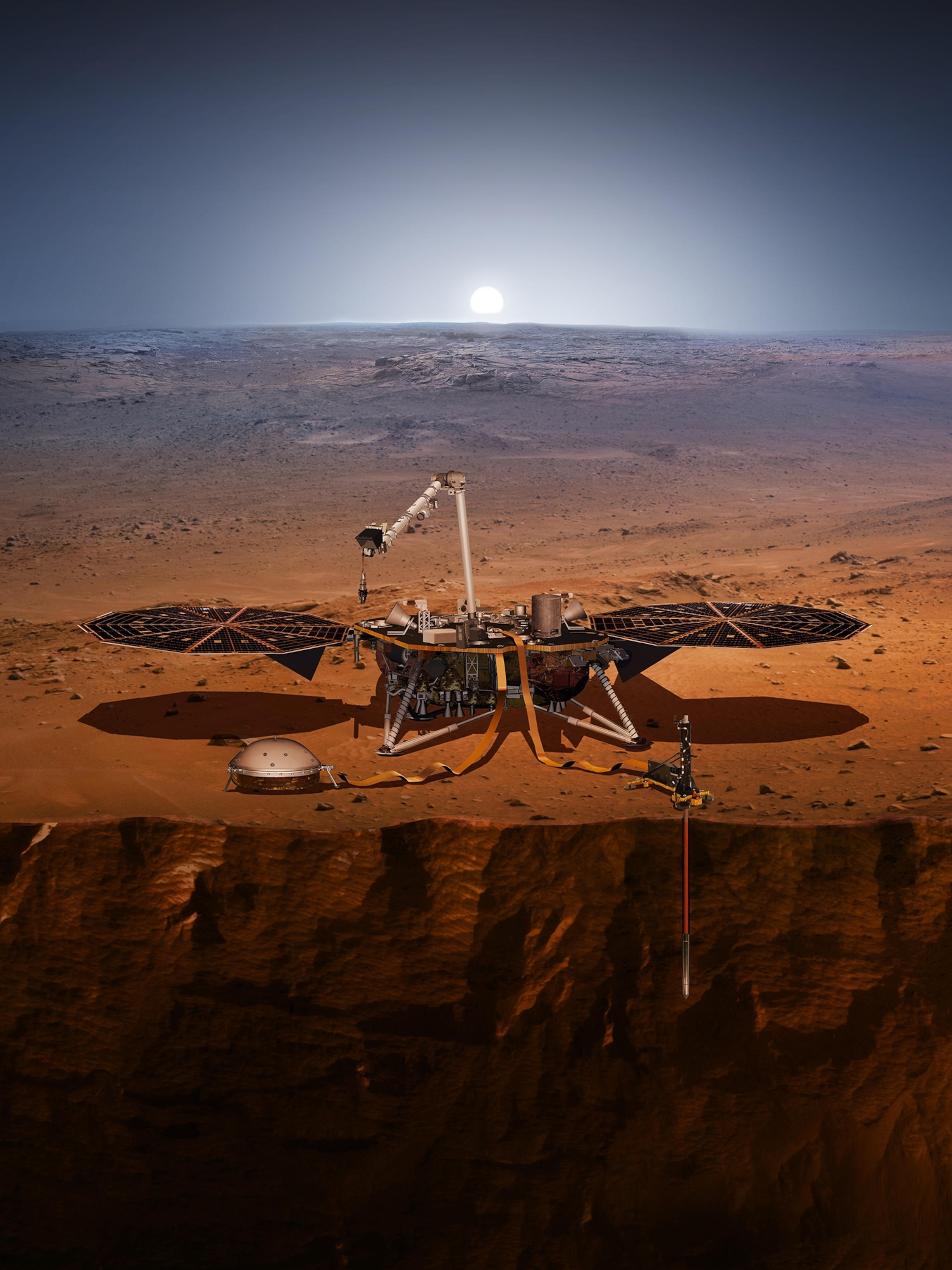 It's the first tremor on the red planet ever recorded—and almost certainly not the last.

An artist's impression of NASA's InSight lander on Mars. The space agency has announced that the lander has probably detected a tremor within the red planet—the first "marsquake" ever recorded.

NASA's InSight Mars lander has recorded its first “marsquake,” making waves among Earthling seismologists tens of millions of miles away and kicking off a new era in our study of the red planet.

The faint signal, which came on April 6, is the first tremble that scientists believe comes from the Martian interior, rather than from surface forces, such as wind. But researchers are still studying the data to pin down the quake's precise source.

The detected waves are fairly small and seem to correspond to a magnitude 2 or 2.5 quake, which would barely be perceptible on Earth's surface. But this tiny tremor marks a momentous moment for InSight scientists, who have waited for this day since the installation of the seismometer in December 2018 and the official start of its monitoring phase several weeks ago. (Read more about InSight and its mission to map Mars's interior.)

“For the first month, it was like, 'This is fine, this is fine, no problem,'” says Bruce Banerdt, principal investigator of NASA's InSight mission. “And then getting to the second month we’re going, 'Eh, anytime now, go ahead Mars, do your stuff.'”

“I was compulsively checking my email at all hours of the day and night,” adds Renee Weber, a planetary scientist at NASA's Marshall Space Flight Center and an InSight co-investigator. “Before I even got out of bed every morning, I would look at my phone and go, 'Maybe today’s the day we're going to get that first quake!'”

Finally, 128 Martian days after InSight landed, the faint echoes of the quake arrived. The team rushed to review the signal—and determined it was in all likelihood a marsquake. “A sigh of relief went up from the team,” Banerdt recalls.

“I’ve been chasing this marsquake for about 30 years,” he says. “This is almost a culmination of kind of a career-long quest for me. ... I’m finally on the road to getting the data I dreamed about starting back in the 1980s.”

What is a 'marsquake'?

Quakes on Earth are primarily caused by the steady march of our ever-shifting tectonic plates. As they jostle for position, stresses build up until they can't any longer—triggering a breaking point we feel as an earthquake.

Unlike Earth, however, Mars doesn't seem to have tectonic plates. Instead, its trembles are thought to come from the slow cooling of the planet over time, which causes the orb to contract and develop fractures on its surface. These quakes can also come from the impact of meteors and possibly the movement of magma deep underground.

Researchers hope to use Mars' shakes and shivers to study the planet's innards. The process is a bit like using an ultrasound to peer inside a body: By looking at how seismic waves bounce around inside the planet, researchers can infer its internal structures.

What can we tell from this event?

The latest quake and three other marsquakes, which are still unconfirmed, are too small to give scientists details about what's going on under Mars' rusty red surface. But that doesn't mean the signal is useless.

“It starts to tell us how active Mars is,” Banerdt says.

On February 4, 2019, InSight deployed a wind and thermal shield to protect the lander's seismometer, which was set down on the Martian surface on December 19, 2018.

The lander's seismometer, called SEIS, was built by France's National Center for Space Studies with support from other European researchers and NASA's Jet Propulsion Laboratory. It is so sensitive, it can detect tremors smaller than the width of a hydrogen atom.

On Earth, there's a well-established relationship known as the Gutenberg-Richter law, which states that for each unit decrease in magnitude—or about a 32-fold decrease in the energy released—earthquake frequency increases by about 10 times. The same approximation also holds for the moon, Banerdt notes. So by monitoring the frequency of these tiny quakes, scientists might get an idea of how often they'd expect to see a larger one.

The tremor's curiously long length—which lasted about 10 minutes—may also hold clues to Mars' surface. Weber adds that the marsquakes look more like the seismic activity recorded on the moon by the Apollo missions than Earth's rumblings.

The difference may come down to how the worlds' soils vary, Weber explains. The moon's surface is dusted with regolith, a very fine-grained, jagged material formed from eons of meteor impacts and other wear and tear. On Earth, however, our active geology constantly weathers down small sand grains, which alters how our soils pack together. As a result, seismic waves percolate through the two worlds' uppermost layers differently. Signals that would appear on Earth as short, sharp bursts get far more smeared out on the moon.

Weber cautions that Mars's lengthy rumbles don't necessarily mean that its soil properties are the culprit. The InSight team is actively working to nail down the specifics.

“We had this library of tools already assembled to analyze the seismicity as it came in ... and it was a little bit frustrating that the first signals that we saw were not really appropriate to be ingested into those waiting tools,” says Weber. “But that just means more fun and more excitement for us, because we're going to have put together new tools.”

Is there hope for more?

The longer that InSight runs, the more events it will see; if these first signals really are marsquakes, more data will confirm that. And Weber notes that InSight will almost certainly feel a meteor impact's jolt at some point during its mission, based on impact rates inferred from satellite observations.

“It’s just a matter of time that we see something else,” she says.

Regardless of what InSight finds, every bump and buzz it feels will add to our knowledge of the red planet, says Tanya Harrison, Mars scientist at Arizona State University. “It’s helping paint the picture that Mars is still an active place—and I think that’s a very different view than what we had even in the Viking days,” she says, referring to the 1970s missions that landed on the surface of Mars. “We’ve just been building incrementally onto this story.”

Each new experiment seems to suggest that the red orb is more complex than we ever thought, she notes: impact craters, landslides, shifting polar caps, and now even possible hints of activity from within the planet.

While scientists are thrilled about the event, they're even more excited about what's to come.