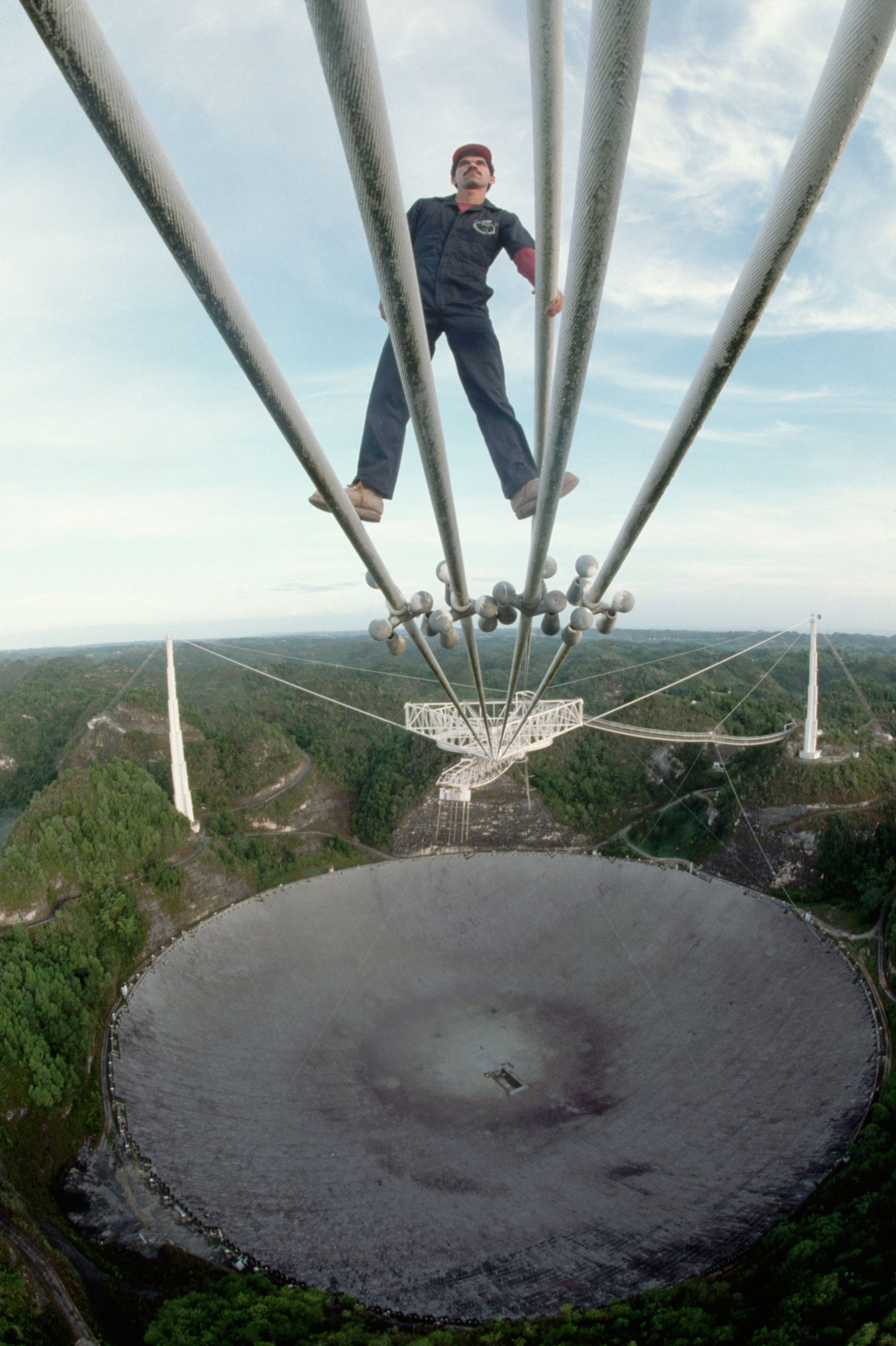 Iconic radio telescope in Puerto Rico to be demolished

After two support cables broke at Arecibo Observatory, the facility is in danger of a catastrophic collapse, prompting the National Science Foundation to decommission the telescope.

Technician Luis Heredia checks some the cables which suspend the receiver over the radio telescope dish at Arecibo Observatory in 1989.

It’s game over for the Arecibo Observatory, home to an iconic, thousand-foot-wide radio telescope near Puerto Rico’s northern shore. Today, the National Science Foundation (NSF) announced that it is decommissioning the massive 57-year-old telescope. The agency also intends to demolish the instrument, which is teetering on the verge of collapse.

“As someone who was inspired as a child by the observatory to reach for the stars, this is devastating and heartbreaking. I’ve seen how the observatory to this day continues to inspire my island,” writes Edgard Rivera-Valentín of the Lunar and Planetary Institute in a direct message on Twitter to National Geographic.

The decision comes after a tough few months for the observatory. Engineers were trying to stabilize the telescope after two of the cables suspending its 900-ton platform broke. With additional cables showing signs of weakening and degradation, worries were growing that the platform could fall roughly 450 feet, crashing through the dish and into the jungle below. Now, NSF has decided to cease repair efforts and decommission the observatory.

“The telescope is in danger of catastrophic failure,” NSF said in a November 19 statement. “Any attempts at repairs could put workers in potentially life-threatening danger.”

Built in the early 1960s, Arecibo’s telescope has been an inspiration and source of pride for the people of Puerto Rico. Many residents have relied on the facility for crucial resources and support during emergencies, such as 2017’s Hurricane Maria. It has played a key role in science, spotting the first confirmed planets beyond the solar system, and detecting gravitational waves emitted by whirling dead stars called pulsars—a discovery that ultimately won the 1993 Nobel Prize in Physics. The telescope is also an extremely powerful planetary radar, which is key for studying asteroids that cross Earth’s orbit.

“Think about what the Golden Gate Bridge means to San Francisco, what the Statue of Liberty means to New Yorkers. Arecibo is this and more to Puerto Rico because it has gone beyond an icon,” Rivera-Valentín writes. “For some of us, it became that goal to reach towards, that symbol that we can achieve great things, that pride that in our own backyard; we were serving the entire planet.”

Over the last decade, the Arecibo Observatory has faced a series of challenges. Hurricane Maria destroyed large portions of the island’s infrastructure and damaged the telescope in 2017. A recent swarm of earthquakes also shook the facility, which Michael Nolan, a former director of the observatory who is now at the University of Arizona, says could be a major factor in its loss of structural integrity.

NSF has been hesitant to continue funding the observatory in recent years, citing several reviews that recommended its decommissioning. Today, after reviewing recommendations from three engineering firms, it decided to go forward with decommissioning the telescope. One of those reports cited a high likelihood of catastrophic failure should another cable break, and Thornton Tomasetti, an engineering firm that has been on-site, recommended “the controlled demolition of the structure as soon as pragmatically possible.”

“Our team has worked tirelessly with the NSF looking for ways to stabilize the telescope with minimal risk,” Alexander Cartwright, president of University of Central Florida, which manages the telescope, said in a statement. “While this outcome is not what we had been working towards, and we are disheartened to see such an important scientific resource decommissioned, safety is our top priority.”

Another report suggested some possible ways to stabilize the structure, and Nolan says he’s disappointed that NSF isn’t going to attempt one of those options.

For now, NSF is recommending that portions of the observatory remain intact, and that the site can still be used for educational purposes.

Editor's Note: This story has been updated with a statement from University of Central Florida president Alexander Cartwright.