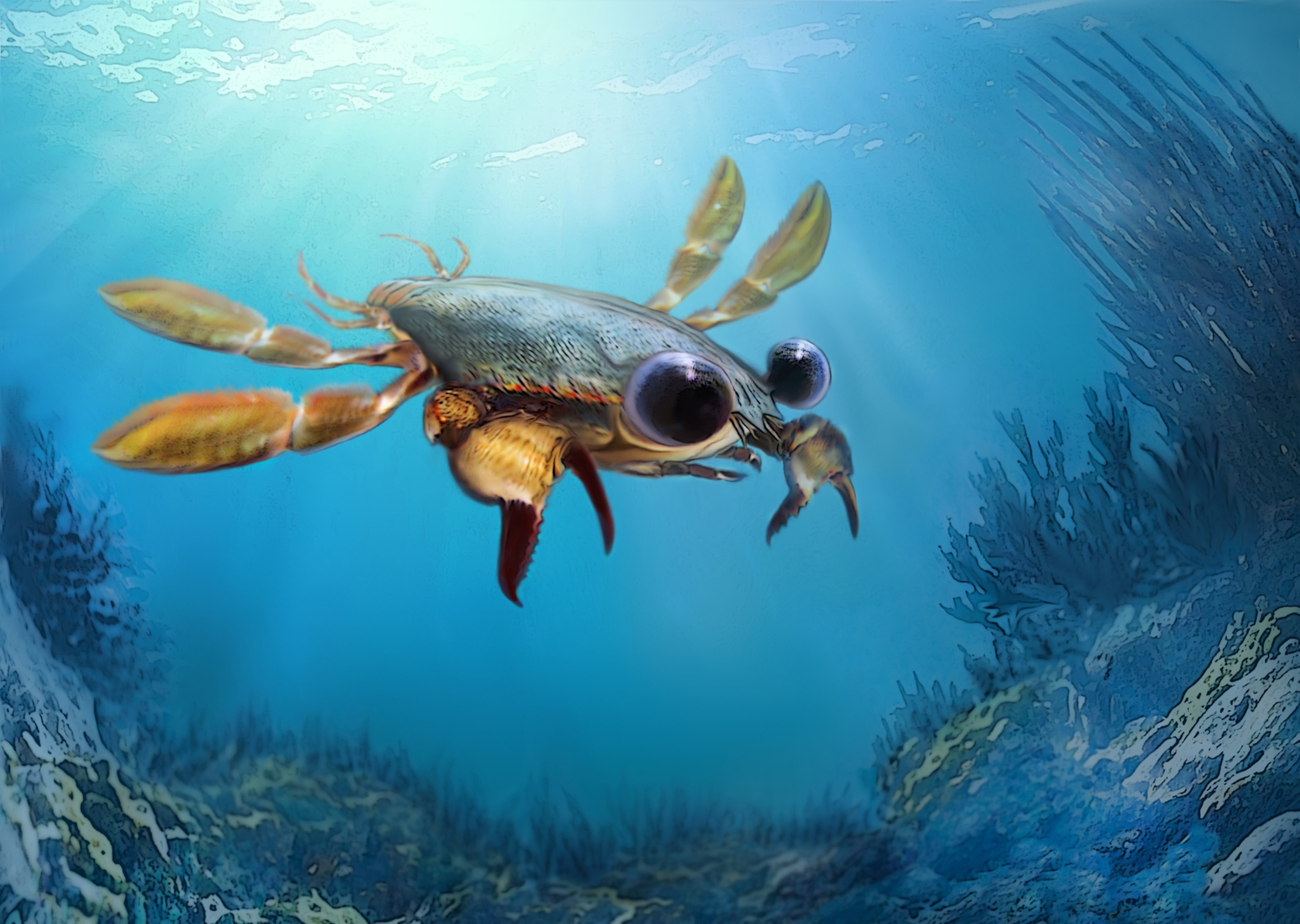 How did crabs evolve 'crabbiness'? It's complicated.

This artist's reconstruction depicts the newfound fossil crab Callichimaera perplexa, what may be the strangest crab that ever lived.
Illustration by Oksana Vernygora, University of Alberta

What makes a crab a crab? As it turns out, it's not an easy question to answer: A strange new species of fossil crab and a massive new genetic study shed new light on how the animals evolved.

In a new study in Science Advances, researchers unveil a newfound fossil site in Colombia that was formed some 90 million years ago. The site's astounding level of preservation—tiny shrimps' bodies down to the millimeter—is extremely rare, and only a few such sites have ever been found in the tropics.

The bounty includes dozens of specimens of a bizarre crab unlike anything ever found. Named Callichimaera perplexa—the “puzzling, beautiful chimera”—the crab seems to contain a mashup of traits seen in today's larval and adult crabs, such as large bulbous eyes, large oar-like front limbs, and mouthparts that resemble legs. “It's more like the platypus of the crab world,” says the study's lead author Javier Luque, a postdoctoral researcher at Yale University and the University of Alberta.

The find underscores the stunning diversity, past and present, within decapods, the group of animals containing shrimp, crabs, and lobsters. The ancient group has roots 350 to 370 million years old, and even today they are dazzlingly diverse, with more than 15,000 species.

“This is like nothing we've seen before in the decapod body plan, so it kind of makes us reconsider what it means to be a crab,” says Heather Bracken-Grissom, a biologist at Florida International University who specializes in decapod evolution. “The name is rather fitting.”

Today's adult true crabs typically have wide, oval-shaped bodies, and their eyes are mounted on stalks. Crabs that burrow or swim, such as blue crabs, might have flattened, oar-like pairs of hind legs. What's more, true crabs' tails are tucked underneath the body.

Callichimaera breaks all of these rules. Its body is far narrower and fuselage-shaped than the standard crab body plan, and its Ping Pong ball-like eyes aren't on stalks, a trait more often seen in larval crabs today than in full-grown adults. In addition, its tiny tail isn't tucked underneath the body, and it has two pairs of enlarged, paddle-like limbs—but they're on the animal's front, not its rear. Its shell also bears a pattern unlike anything seen on another crab, living or dead.

Based on what Luque's team has learned so far, researchers think the crab was an active predator that swam in the water column. Given its eye size, it's also possible that Callichimaera was nocturnal.

“This is completely the opposite to its analogs, the ones that live in the sediments,” says Luque. “Imagine you had a flying dolphin—that's what we have.”

Decapods' diversity and age makes it extremely challenging to plot how all decapods, extinct and living, are related to each other. Charting the group's biodiversity is essential, researchers say. They are ecologically vital components of aquatic food webs, and their fisheries generate food and livelihoods for many, to the tune of $24 billion worth of aquaculture per year.

News of Callichimaera comes as another major study sheds light on the evolution of crabs. In the Proceedings of the Royal Society B, a team led by Bracken-Grissom and paleontologist Joanna Wolfe unveils the most detailed genetic family tree of decapods ever assembled. Over six years, the team sequenced hundreds of genes in 94 different species, comparing them against each other to chart the decapods' tangled branches of ancestry. Previous studies had attempted to pull this off with just a handful of genes.

“What astounded me was that there was no well-supported framework for the relationships of one of the most iconic groups of marine invertebrates,” says Wolfe, the study's lead author and a research associate at Harvard University.

Callichimaera's discovery was as happenstance as the animal is enigmatic. In December 2005, Luque and some of his fellow university students were helping to map the geology of Pesca, a town northeast of Colombia's capital Bogotá. Exhausted from a day's work, he and a friend of his sat down against a rocky outcrop. Curious, Luque began to chip at the rocks and one split open—revealing a strange-looking animal. “It was like the best Christmas present,” he says.

Luque wasn't initially planning on studying invertebrate fossils; he had been drawn to paleontology by the promise of dinosaurs and ancient mammals. But six months later, when Luque was digging in a different patch of rock nearby, he found a second fossil of the same creature; the more specimens he found, the more his curiosity deepened. He started sending pictures of the fossil to experts around the world, including Francisco Vega at the National Autonomous University of Mexico and Rodney Feldmann at Kent State University, who are now his coauthors.

At first, Luque thought that the fossils represented an extinct type of frog crab. But the more he and his colleagues pored over the fossils, the more the ancient animal defied modern checklists for what constitutes “crabbiness.”

The find suggests that some advanced aspects of the crab body plan, such as the swimming limbs and large claws, were evolutionarily firmed up by 90 million years ago—implying that some groups independently evolved to lose the traits, rather than gaining them over time.

In their first hundred million years or so as a distinct lineage, decapods were fringe players in the aquatic ecosystem, as ancient animals such as trilobites and eurypterids—extinct invertebrates nicknamed “sea scorpions”—dominated. But about 252 million years ago, huge volcanic ulcers in what's now Siberia belched massive amounts of greenhouse gases into Earth's atmosphere, triggering a sudden drop in ocean oxygen levels.

This blow was enough to wipe out more than 95 percent of all life on Earth, in what's now called the Permian-Triassic extinction or the “Great Dying.” But the survivors of this catastrophe—including decapods—thrived in the aftermath. In the millions of years afterward, decapod lineages diversified rapidly.

Crabs saw a second, bigger boost in their diversity about 145 million years ago, at the end of the Jurassic period. Wolfe and her colleagues speculate that the change occurred because that's when reef-building corals started to emerge. As the first reefs as we know them formed, the habitats they created may have provided many ecological nooks and crannies.

Now that Luque and Wolfe's studies have published, the researchers are now teaming up. Luque and Wolfe plan on creating an even larger genetic tree of life for all crustaceans, which would provide a bigger test of the coral-diversity hypothesis.

Through it all, the authors say that even more bizarre fossil creatures are sure to be found, adding ever more twigs to the tree of life.

“It's really exciting that today in the 21st century, we still discover (fossil) organisms for which we had no knowledge or no information whatsoever,” says Luque. “It just makes us wonder how many treasures—how many valuable pieces of information about our distant past—are still waiting out there to be discovered.”