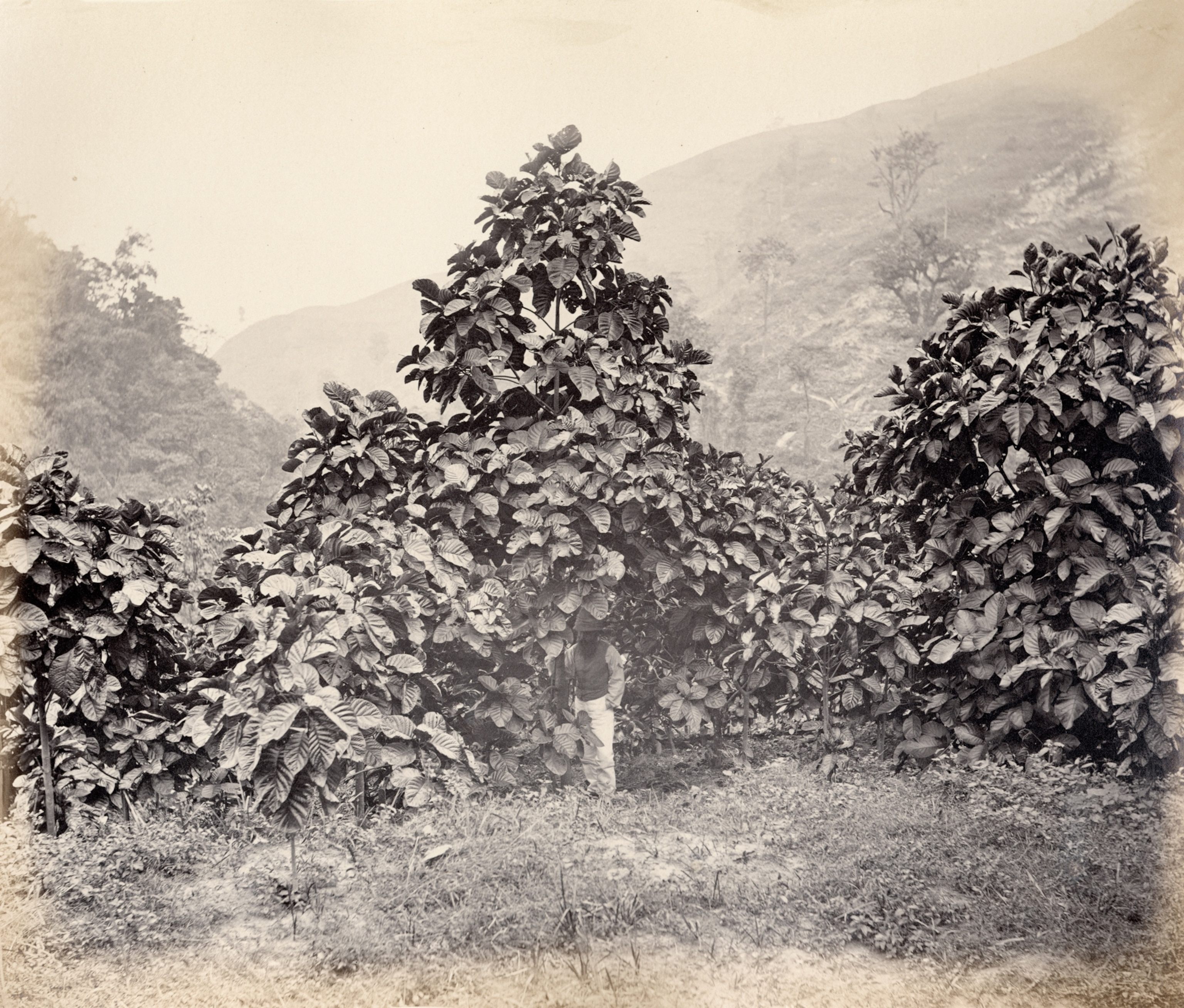 ‘Hydroxychloroquine tea’ is being peddled as a coronavirus cure in Brazil. It's fake.

Though there’s no proof that hydroxychloroquine fights COVID-19, an Amazon tree is being tapped for its supposed remedy. That may be unsafe.

Cinchona succirubra, a variety of quina tree also known as Cinchona pubescens, on a government plantation in Sikkim, India, 1866. Cinchona trees are native to South America but were transferred to plantations in India, after Europeans colonists learned that its plant extracts could fight malaria.
Photograph by Royal Geographical Society via Getty Images

SÃO PAULO, BRAZILIn the Facebook video posted on March 30, a man turns over a small plastic bag he’s holding, filled with tree bark shavings. He shows his followers that it’s labeled “quina tea” and explains how to prepare the drink he says will “immunize your body and fight COVID-19.”

The demand for the tea will be high, he says, and he urges everyone watching to buy theirs now. He’s not the only one who thinks this way—and that may be a big problem.

As scientists the world over search for a way to prevent and treat COVID-19, some Brazilians have turned to nature for a remedy. They’ve stumbled upon a family of plants known locally as quina, used often in the Amazon and other rural communities to combat malaria and other inflammatory conditions. The tree is thought to have inspired what would later become hydroxychloroquine, a medication being touted by both Brazilian President Jair Bolsonaro and U.S. President Donald Trump as a treatment for COVID-19, despite a lack of solid scientific proof. (Here's what you should know about experimental therapies for coronavirus.)

For decades hydroxychloroquine has been used against diseases such as malaria and lupus, despite side effects including cardiac toxicity. The two politicians’ promotion of the drug has launched a debate over whether the medication is safe for those trying to avoid poor outcomes with the coronavirus. On June 3, a study of 800 people in the New England Journal of Medicine reported no evidence that hydroxychloroquine is helpful in preventing COVID-19, the latest in a long line of research citing shortcomings with the drug.

What’s more, quina trees aren’t quite what these Brazilians think—and the tea being promoted in videos and messages across social media could do more harm than good.

The year was 1638. After visiting the Amazon rainforest in Peru, the Spanish countess of Cinchón fell ill with a high fever. She was treated by a local indigenous group with a bitter substance they called quina quina. To her delight, the fever receded and she was cured—of what we now know was malaria.

The remedy came from an Andean tree traditionally called quina, or china, that would later be given the genus name Cinchona in the countess’s honor. Europeans returned home with the plant and sold it as a medication known as “Jesuits’ powder.” More than four decades later, it would also save England’s King Charles II from malaria.

It would be centuries before scientists discovered this particular variety of Cinchona was a source of quinine, which would later inspire synthetic drugs including chloroquine and hydroxychloroquine.

As Europeans continued to extract the Cinchona for the malaria-fighting molecule, the Peruvian tree was pushed to the brink of extinction. The following century, a call went out to find substitutes for the bark in the Brazilian Amazon. Several plants were found and also given the name quina.

They weren’t, however, sources of quinine.

Instead, these alternative trees contain other alkaloids—natural chemicals that are bitter like quinine, which likely convinced the Europeans that these plants would have the same medicinal properties.

To this day, however, many of the dozens of Brazilian quinas, often referred to as false quinas, haven’t been extensively studied.

“They’re full of chemical substances we know nothing about yet,” Brandão says. “A lot of them are toxic and shouldn’t be ingested at all.”

Plants don’t produce anything specifically for us...
They only produce what they need to defend themselves. And a lot of the time, what they produce is toxic.
ByVanderlan BolzaniSão Paulo State University

Brandão and her team have created a database of Brazilian plants and are studying the DNA of barks being sold in open-air markets as quinas. Of the 36 samples they’ve taken so far, four are false quinas. The other 32 plants are completely unrelated to the Cinchona genus and their medicinal effects are unknown.

Even if the Brazilian quinas did contain quinine that could be extracted, that wouldn’t make their derivatives equal to hydroxychloroquine. While quinine is a naturally occurring compound, the active ingredient in hydroxychloroquine is synthetic and has a completely different chemical makeup.

“Plants don’t produce anything specifically for us,” says Vanderlan Bolzani, an organic chemist at São Paulo State University who specializes in the chemistry of natural products and medicinal plants. “They only produce what they need to defend themselves. And a lot of the time, what they produce is toxic.”

Moreover, while many people consider tea a safer choice than taking a medication produced by the pharmaceutical industry, that’s not always true. When adding a natural substance, like quina bark, to boiling water, it’s not only the desired substance that is extracted, but also all the other chemicals produced by the plant, which could lead to dangerous results. One piece of quina bark may not even be chemically the same as another piece, depending on where the two trees are grown.

“Depending on the season, a plant modifies itself. It stops producing some substances and starts producing others,” Bolzani says. “Who can guarantee that, in order to survive, to adapt, to regulate itself, that plant has produced the same chemical composition?”

Quinine itself has always been known to be toxic. Quinine pills are still used as an alternative treatment for malaria when the disease shows resistance to newer drugs, such as hydroxychloroquine. But its common side effects—blurred vision, hearing loss, nausea, vomiting, and confusion—can be severe. In 2006, the U.S. Food and Drug Administration stopped allowing the sale of over-the-counter quinine to treat night leg cramps, after reports of serious side effects and death.

As many people turn to fake quinine tea as an alternative treatment for COVID-19, there is also concern that the plants themselves could suffer.

“When you take the bark from a tree, it dies,” says Brandão. “So, by using these plants in this way, you’re not only possibly harming the health of the person drinking this tea, but you’re also harming the environment at the same time.”

Experts agree that plants like the Brazilian quinas could have other therapeutic properties—but whether they could treat a disease, including COVID-19, is unknown.

“The majority of the scientific discoveries of value that we have, going as far back as aspirin, come from inspirations from nature,” says Lauro Euclides Soares Barata, an organic chemist specializing in natural products at the Federal University of the West of Pará. “But we need more studies. A small study takes at least four years. We’ve only been dealing with this virus for four months. What we need is time.”