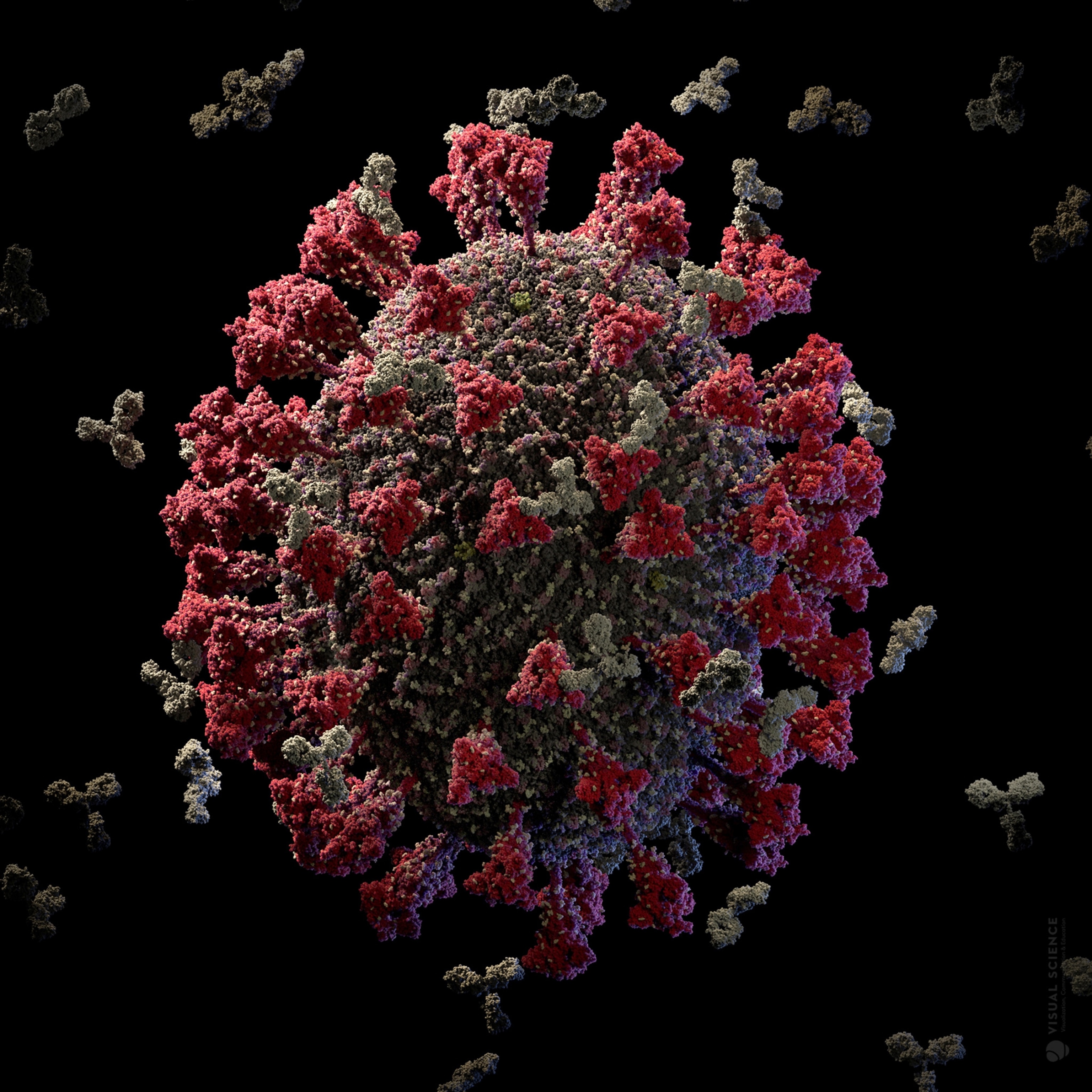 The biotech firm's leading candidate has just entered phase three clinical trials in the U.S. Find out why this vaccine technology is promising—but not without its skeptics.

The surface of the SARS-CoV-2 virus is covered in protein spikes (red). Moderna’s messenger RNA (mRNA) vaccine would teach the human body to recognize these spikes, allowing the body to produce an army of neutralizing antibodies (white) to stop the coronavirus before it can establish an infection.
Model at atomic resolution in by Visual Science

A promising coronavirus vaccine candidate hit another milestone this week, when Moderna Therapeutics began phase three of clinical trials. The move signals the biotech company and the National Institutes of Health, which are collaborating on the trial, are one step away from bringing the drug to the public and commercial markets.

After nearly seven months of global deaths and economic shutdowns wrought by the COVID-19 pandemic, people are anxiously awaiting a glimmer of hope for a return to normal routines. This partly explains the continued frenzy over vaccine development, including a candidate from the University of Oxford that also recently entered phase three in Brazil. (Read: Now that the Oxford vaccine has entered its final phase of COVID-19 trials, here's what happens.)

Moderna moved its candidate from the lab in Cambridge, Massachusetts to human trials in a record-setting 63 days, making it the frontrunner. On May 18, the company announced preliminary findings that healthy subjects had responded to its mRNA vaccine by producing “neutralizing antibodies.” Antibodies are the key sentinels made by the immune system to prevent infection by the coronavirus. Experts were quick to point out that the results applied to only eight people out of 45 in the trial. The company took another two months to release a peer-reviewed study with sufficient information to gauge whether phase one subjects had protective immune responses, which is widely considered by immunologists to involve more than simply producing antibodies.

The details that Moderna presented suggest that the company may be on its way to achieving something unprecedented: licensing the first mRNA vaccine for human use.

“The results are exciting, because they've got phase one data showing that the vaccine is safe, which is a big deal,” says Ali Salem, a drug developer and professor at the University of Iowa’s College of Pharmacy who is not involved in the Moderna trial.

Moderna’s phase three trial will involve an estimated 30,000 participants tested at 89 sites spread across 30 states and the District of Columbia. The aim is to determine if two doses of the mRNA vaccine prevent people from catching COVID-19, stop those with the disease from dying, or both.

“Our principal investigators would easily say that these studies are the most important that they’ve done in their lifetimes,” says Jaime Farra, a marketing director at the Alliance for Multispecialty Research, which is running a site involved in phase two that is now also conducting phase-three tests in Newton, Kansas.

Yet the introduction of phase three is somewhat unusual given Moderna hasn’t completed phase two of its trial, which began in late May. While phase one is an initial safety check among healthy individuals, phase two is meant to give the first indications that a vaccine can be used among patients sickened by the disease.

If phase three were to fail, it would vindicate those who have questioned the decision to expedite Moderna’s candidate as part of Operation Warp Speed. This federal project, led by the Department of Health and Human Services, has also already scheduled phase three trials with 30,000 subjects for the Oxford vaccine and a candidate being developed by Johnson and Johnson. Still, skeptics argue that fast-tracking Moderna’s candidate is a gamble in light of the up-and-down history of mRNA vaccines.

Whenever a germ infects a body, our immune systems scramble to recognize and mount a response. Traditional vaccines take advantage of that response by injecting whole but inactive viruses, or their whole proteins, into our bodies, triggering an immune reaction. These vaccines take time to develop, in part because scientists must grow and inactivate an entire germ or its proteins in a specific way.

Messenger RNA is genetic material made of nucleic acid—the same stuff as our DNA—that travels throughout our cells, giving final instructions on which proteins to build to form the body’s cellular architecture. In the early 1990s, scientists wondered what would happen if they manufactured pieces of viral DNA and mRNA and then injected them into human cells or lab animals. The hope was that the cells would take in the genetic snippets, make viral proteins, and trigger an immune response.

In theory, this method would allow scientists to make vaccines faster; instead of weeks, a candidate could be ready to test in hours or days. These vaccine candidates would also be more flexible and durable against germs that tend to evolve through mutation, such as coronaviruses, influenza, and HIV. This could help lead to a universal vaccine that would work against multiple strains of a virus, says Margaret Liu, chairman of the board for the International Society of Vaccines.

Thirty years ago, Liu was among the first wave of lab researchers to try to use DNA and mRNA vaccines; her early results with a universal DNA vaccine for influenza were the first to show protection and showed the most promise—at least in mice. Overall, the early days of DNA vaccines and mRNA vaccines showed repeated success in animal models, which is known as the “pre-clinical” stage of drug development, but then couldn’t generate potent immune responses in humans.

“People thought, well, it must be because humans are bigger,” Liu says. But that hypothesis lost support after successful DNA vaccines were developed for horses, fish, and California condors.

Meanwhile, mRNA vaccines struggled with weakened stability. Once inside the body, the mRNA from a vaccine breaks down faster than DNA, which also limits the immune potency. Additionally, mRNA can aggravate immune cells, causing adverse reactions. For years, these challenges sidelined mRNA vaccines and relegated DNA vaccines to veterinary medicine.

The pivot in progress

The narrative began to shift in 2005, when scientists at the University of Pennsylvania introduced slight chemical modifications to mRNA vaccines. These changes added durability and made the vaccines safer, causing fewer adverse immune responses.

“A lot of people started to look at mRNA as a therapeutic strategy for a variety of diseases,” the University of Iowa’s Salem says. One of these offshoots would become “ModeRNA Therapeutics,” now known as Moderna, a company created in 2010 after Harvard researcher Derrick Rossi used modified mRNA to reprogram stem cells in a bid to treat cardiovascular disease.

Over the years, the company also came to rely on a popular tool for drug delivery called lipid nanoparticles. By packing genetic material inside a slippery pod made of oily lipids, these particles could more easily slide mRNA into cells, where it could go to work. With safer mRNA technology and better drug delivery, the company was able to expand its portfolio and pursue remedies for cancer and a range of infectious diseases, including the flu. But the major turning point arrived with the mosquito-borne Zika virus.

After Zika emerged in 2015, laboratories rushed to find a suitable vaccine. Justin Richner, now an assistant professor at the University of Illinois at Chicago, was part of a multi-university effort to conduct early research on mRNA vaccine candidates made by Moderna Therapeutics. Richner says the team honed the mRNA codes, which led one of Moderna’s Zika vaccines into early human trials in 2016—where it stalled.

Moderna Therapeutics did not respond to multiple requests from National Geographic for an interview. But the company’s corporate updates, which are not peer-reviewed, can yield clues about their progress with the COVID-19 vaccine. For example, while Moderna’s May 18 announcement didn’t provide hard numbers about how many antibodies were present in humans or mice after immunization. But it did reveal that the first phase of its COVID-19 trial has apparently achieved its primary goal to determine the safest drug dosage.

“When you do a first-in-humans clinical trial, the utmost important information to get out is whether the vaccine is safe,” says Maria Elena Bottazzi, associate dean at Baylor College of Medicine's National School of Tropical Medicine, who is not involved in the Moderna trial.

She adds that a better sign of success for Moderna may be something that wasn’t addressed by the company’s early statements and featured briefly in its peer-reviewed study: T-cells. Antibodies are only one branch of an immune response. T-cells are another. Both can form lasting protection on their own, but T-cells help make antibodies emerge. That matters because DNA and mRNA vaccines are better geared toward triggering T-cells, Bottazzi says, but assessing such a response is laborious and typically reserved for later phases of human trials.

Still, Moderna could have a long way to go. Phase two subjects are slated to be monitored for at least 15 months, and the third phase isn’t scheduled to finish until October 2022—though if early results in these trials are promising, its approval may be expedited given the pandemic.

Regardless of whether Moderna succeeds, the world will need multiple versions of the coronavirus vaccine to beat the pandemic. Globally, more than a hundred COVID-19 vaccine candidate trials are underway, and so far, multiple companies are reporting promising peer-reviewed results. Numerous bets are ultimately an advantage, because if any single vaccine candidate fails, the others remain to offer continued hope, Bottazzi says.

Please be respectful of copyright. Unauthorized use is prohibited.
Editor's note: The story has been updated with the news that Moderna has confirmed the start of its phase three trial. The story was originally published on May 29.