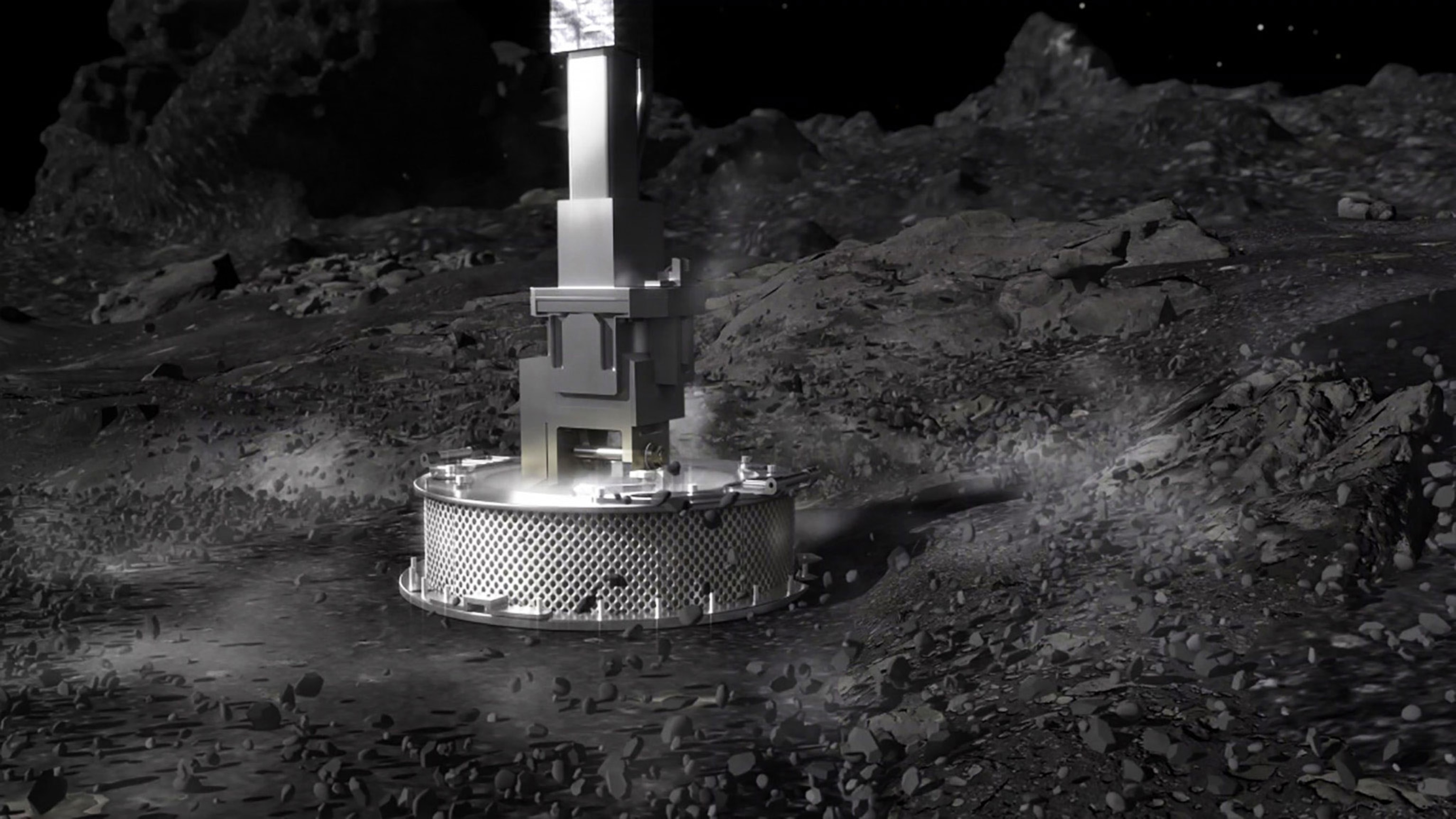 The historic attempt to sample the asteroid Bennu could provide clues to the origins of our solar system—and of life itself.

Working like a reverse vacuum cleaner, the sampler head of the OSIRIS-REx spacecraft appeared to operate flawlessly collecting material from the surface of asteroid Bennu. NASA awaits confirmation.

Illustration by NASA/Goddard Space Flight Center
Editor's Note, October 23: Leaders of NASA’s OSIRIS-REx mission have confirmed that the spacecraft collected a significant amount of material from the asteroid Bennu during its October 20 encounter. In fact, the spacecraft’s sampling mechanism collected so much material that the device was jammed slightly open, letting some of the sample escape. “The loss of mass is of concern to me, so I’m strongly encouraging the team to stow this precious sample as quickly as possible,” said OSIRIS-REx principal investigator Dante Lauretta of the University of Arizona in a statement.

Littleton, ColoradoIn one of the most ambitious games of tag in human history, NASA’s OSIRIS-REx spacecraft has successfully reached out and touched Bennu, a tiny, top-shaped asteroid that’s been spinning through the solar system for a billion years. If all went according to plan, the spacecraft scooped up a bit of material during its brief moment of contact and departed seconds later with precious cargo: rocks and dust dating back to the solar system’s birth.

Confirmation of a successful sample will take days, but even now, the team knows that the spacecraft touched down on Bennu’s surface within 2.5 feet of its target.

“We’re safely moving away from the asteroid’s surface,” said University of Arizona planetary scientist Dante Lauretta, the principal investigator of OSIRIS-REx, after the team confirmed the spacecraft’s sample collection mechanism activated. “We did it, we tagged the surface of an asteroid.”

OSIRIS-REx could bring back more material from another world than any other robotic mission, with only the Apollo moon landings collecting more extraterrestrial rock and dust. If OSIRIS-REx has successfully collected enough of a sample, the spacecraft will depart Bennu in March 2021, reaching Earth two and a half years later to eject the filled capsule, which will parachute to the deserts of Utah for collection and study.

OSIRIS-REx stands to provide a wealth of insight into Bennu’s history, and perhaps help scientists better understand the origins of water and life on Earth.

“Asteroids are like time capsules floating in space that can provide a fossil record for the birth of our solar system,” Lori Glaze, the director of NASA’s planetary science division, said in a press briefing on October 19. “They can provide valuable information about how the planets—including our own—came to be.”

Some space rocks also pose a threat to life’s future—and that includes Bennu. NASA estimates there’s a 1-in-2,700 chance of Bennu colliding with Earth sometime in the late 2100s. Decades from now, if future measurements confirm a collision course, data from OSIRIS-REx would help scientists monitor the asteroid and alter its orbit to avert a potentially catastrophic impact.

Flying to an ancient world

Getting to Bennu has been a hard, 16-year journey for the mission team.

To safely reach the Nightingale sampling site on Bennu, the OSIRIS-REx team had to map the area's surface hazards. Green regions are hazard-free. If the spacecraft predicted that it will touch either a cautionary (yellow) or hazardous (red) area, it would have aborted its descent for another day.

Because OSIRIS-REx couldn't capture sample particles more than two centimeters wide, the team also mapped the best areas to sample within the Nightingale site. Blue areas seem to have a lot of fine-grained material, while red areas look less promising.

Illustrations by NASA/Goddard/University of Arizona

Though the mission was first conceived in 2004, NASA didn’t formally select it to fly until May 2011. Mere months later, OSIRIS-REx’s original leader, University of Arizona planetary scientist Mike Drake, died after a prolonged illness following liver failure. University of Arizona planetary scientist Dante Lauretta, Drake’s deputy, stepped into the role left by his mentor, and the mission has been carried out in Drake’s memory.

“It’s really achieving the magnificent dream that [Drake] had,” says NASA associate administrator Thomas Zurbuchen, who was friends with Drake. “There’s a tremendous sense of achievement I’m sure he would have, a pride in the team, if he was here—and in spirit, we think he is.”

After launching on September 8, 2016, OSIRIS-REx traveled tens of millions of miles to arrive at Bennu in December 2018. Bennu is the smallest celestial body a spacecraft has ever orbited: a mere rubble pile less than 1,700 feet wide on average, barely held together by its own feeble gravity. In such tenuous conditions, even the subtlest forces can nudge OSIRIS-REx out of whack, such as the pressure of sunlight pushing against the spacecraft.

As a result, the OSIRIS-REx team has had to model the spacecraft’s behavior and check its orbit to an unprecedented degree. Without regular corrections, errors in OSIRIS-REx’s trajectory would add up quickly, eventually leaving researchers without an accurate sense of where the spacecraft is at any given time.

Bennu’s landscape has also given NASA some nasty surprises. Prior to OSIRIS-REx’s launch, researchers expected the asteroid to have smooth, fine-grained “sandy beaches” on its surface. But once the spacecraft arrived, NASA learned that Bennu is actually covered with blocky boulders.

The terrain was far rougher than OSIRIS-REx had been designed for, so the engineering team had to update the spacecraft’s navigation software in the middle of the mission. To give this new software as much information to work with as possible, the OSIRIS-REx team mapped the asteroid’s entire surface to within two inches—by far the most detailed global map a spacecraft has made of another celestial body. “We really had to sharpen our pencils,” says Lockheed Martin’s Mark Fisher, OSIRIS-REx’s chief engineer.

Bringing it all back home

When Lockheed Martin engineers tested the deployment of OSIRIS-REx's Touch and Go Sample Acquisition Mechanism (TAGSAM), they used a helium balloon to simulate the microgravity environment the arm would experience in space.

While the team still needs to confirm a sample, data already collected by the spacecraft reveals that carbon-bearing molecules, necessary for life, are found all over Bennu’s surface, including the Nightingale sampling site. Researchers are already prepping labs around the world to study this material for clues to the origins of life in the solar system.

“Bennu has turned out to be everything I hoped it would be,” Lauretta says. “Scientifically, it’s literally pay dirt.”

Two earlier asteroid sampling missions, performed by Japan’s Hayabusa and Hayabusa2 spacecraft, paved the way for OSIRIS-REx. Hayabusa returned the world’s first asteroid sample in 2010, and Hayabusa2 will drop its cargo—a capsule filled with several grams of the asteroid Ryugu—from space into the Australian outback on December 6.

But these Japanese missions picked up only small amounts of fine-grained material. By contrast, OSIRIS-REx is designed to pick up as much as 4.4 pounds of material that ranges in size from tiny grains to two-centimeter-wide pebbles.

Jamie Elsila, a research scientist at NASA’s Goddard Space Flight Center in Greenbelt, Maryland, is interested in the amino acids—protein building blocks—that formed within Bennu’s dirt through abiotic chemical processes. Life on Earth uses 20 amino acids, but many more kinds have been found within meteorites that have fallen to the ground. Bennu’s pristine samples could shed light on which amino acids were present in the early solar system and how their proportions may have affected the origins of life on Earth.

The successful TAG event is cause for relief, but the team is not ready to pop the champagne just yet. The next week and a half are crucial for checking whether OSIRIS-REx actually picked up material from Bennu as designed.

In the coming days, researchers will issue a command to make the spacecraft pirouette in place with its robotic arm extended. The more debris that the robotic arm picked up, the more force it will take to speed up OSIRIS-REx’s rotation, allowing researchers to estimate the sample haul to within a few grams. On October 30, Zurbuchen will decide whether OSIRIS-REx packages its sample to return to Earth, or turns back to Bennu for a second sampling attempt.

Future missions to other small, primordial worlds are already in the works, such as a planned flight to the metallic asteroid Psyche. Lockheed Martin, which hosts OSIRIS-REx’s mission control, is also building NASA’s upcoming Lucy spacecraft, which will launch in late 2021 to visit the Trojan asteroids orbiting alongside Jupiter.

These smallest of worlds can help solve the biggest cosmic mysteries, and like an impatient detective on the case of a lifetime, Lauretta is looking forward to seeing Bennu’s clues. “I cannot wait to get those samples,” he says. “We’re going to have so much fun.”

This story has been updated to reflect the successful contact with Bennu.