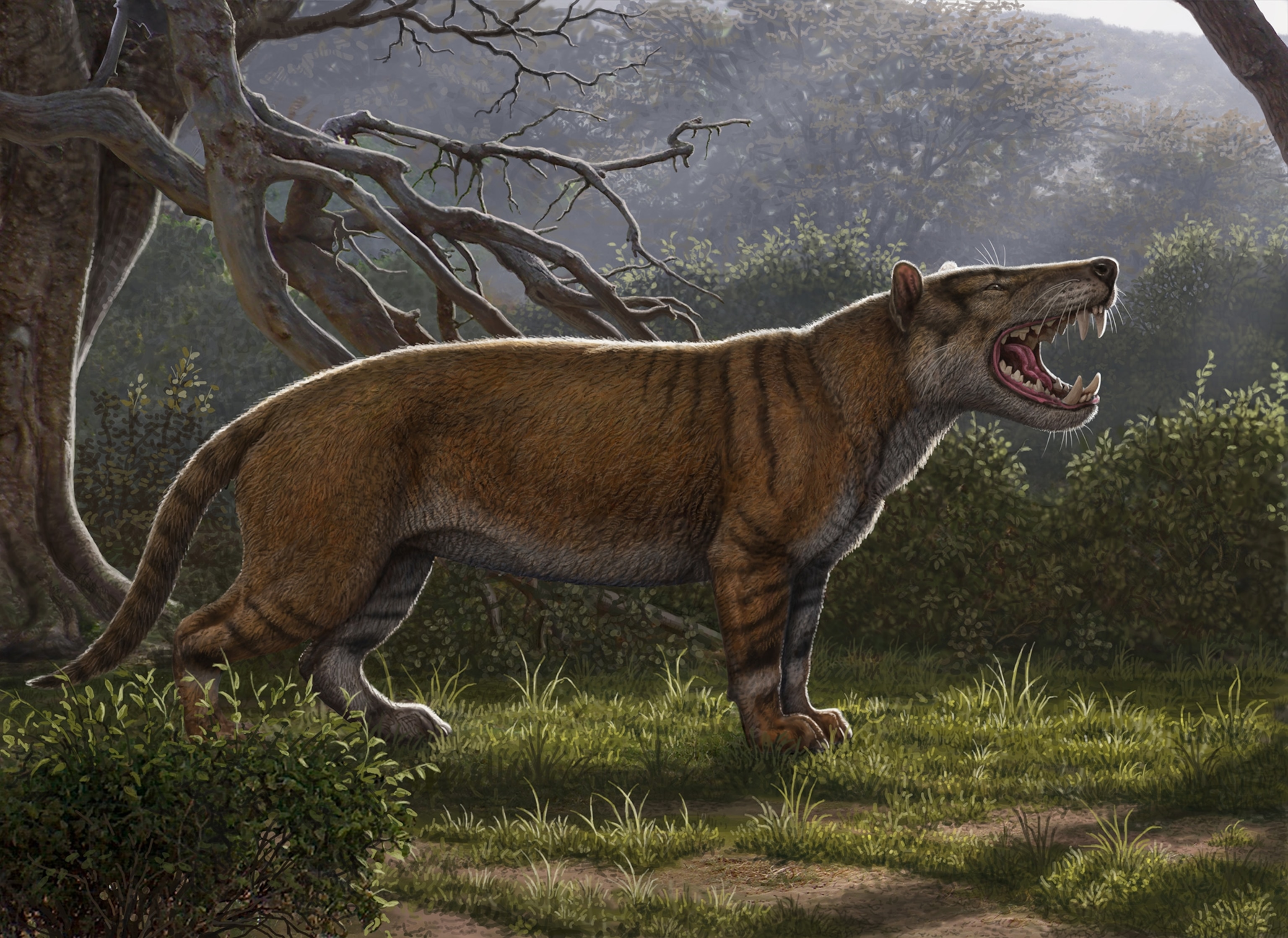 About 22 million years ago, Simbakubwa was a fierce predator that “had lots of blades,” paleontologists report.

Simbakubwa kutokaafrika, a gigantic carnivore known from most of its jaw, portions of its skull, and parts of its skeleton found in Kenya, was a member of the extinct group known as the hyaenodonts.

The handful of mysterious fossils sat unstudied for decades, tucked safely in a drawer at the Nairobi National Museum in Kenya. But now, analysis of the ancient remains has revealed that they belonged to a giant meat-eating mammal larger than a polar bear, a newly described species that’s been dubbed Simbakubwa kutokaafrika.

Reported this week in the Journal of Vertebrate Paleontology, the powerful predator prowled the Earth some 22 million years ago. Although Simbakubwa translates to “big lion” in Swahili, this behemoth was not a big cat. Instead, it is the oldest known member in a group of extinct mammals called hyaenodonts, so named due to their dental resemblance to hyenas, even though the groups are also unrelated.

How much do lions eat? When do they begin to roar? Find out how many pounds of meat they devour, how loud their roars can be, and whether they are endangered.

The discovery helps connect some of the evolutionary dots for this group of massive meat-eaters, which were near the top of the food chain in the same African ecosystems where early apes and monkeys were also evolving. The fossil may also help scientists better understand why these apex predators ultimately did not survive.

The find “is a good chance for us to bring these other lesser known carnivorous predators to the surface,” says Jack Tseng, an evolutionary biologist and vertebrate paleontologist at the University at Buffalo who was not involved in the study. “Before the predecessors of modern carnivorans that we’re so familiar with—lions, hyenas, wolves—before they ever evolved, the global scene of predators was essentially dominated by these hyaenodonts."

In 2013, paleontologist Matthew Borths was doing research at the Nairobi museum for his dissertation on the hyaenodonts, and he asked a curator if he could look at their specimens. There, he found the unusual fossils in a cabinet that was part of a collection marked “hyenas.”

The fossils had been excavated between 1978 and 1980 at a site in western Kenya called Meswa Bridge. So Borths reached out to Ohio University paleontologist and National Geographic grantee Nancy Stevens, who had discovered an important fossil site in Tanzania that’s only a couple of million years older. Their fate was sealed when Stevens told Borths that she had opened the exact same drawer while working in Nairobi and had wondered about its contents.

“It was like the two of us could commiserate, like, Isn’t this amazing, we should do something!” Borths says. Stevens later asked Borths to join her lab as a postdoctoral researcher, and together the two returned to the Nairobi National Museum in 2017 to begin analyzing and describing the specimens, which included most of the animal’s jaw as well as bits of skeleton, skull, and teeth.

Carnivores are often noted for their front canine teeth, which help grab prey, but their back teeth are important, too.

“It’s in the back of the head that this business of slicing through meat takes place,” Borths says. All modern carnivores—including cats, dogs, racoons, wolves, and bears—have one pair of these meat-slicing teeth. Hyaenodonts had three pairs.

“This animal had lots of blades,” Borth says.

Aside from their fear factor, the teeth were key to helping the duo grasp the full picture of an extinct species. Without good teeth to study, Borths says, “it’s like having pieces from different sides of the puzzle, and nothing to connect the pieces in between.”

“The science is definitely very impressive,” Tseng adds. “Any time you have a new record of something this large in the fauna and ecological food web, it makes you reconsider exactly what the interactions were like between predator and prey.”

One of the goals of the research, which was partially funded by the National Geographic Society, was to put Simbakubwa in its family tree, Borths says.

“Once you figure out the relationships between these animals, you can start to do things like estimate how big do you think the common ancestor of these creatures was, what was the world like when that theoretical common ancestor might have been alive?” he says. “You can experiment with the data a little bit to figure out how these big evolutionary changes map onto other changes, like climate change and continental drift.”

As Africa got closer to Eurasia 20 million years ago, animals began to mix across continents, creating an ecological exchange that “raises all kinds of hell,” Borths says. And as the continents shifted and the east African rift began to rise up, ocean currents shifted, too.

“All of those pieces are really fascinating natural experiments in how different groups adapt,” Borths says.

Despite being large and in charge, Simbakubwa did not make it and even its relatives were extinct by the end of the Miocene epoch, roughly five million years ago. But why?

The animal “was not built for failure,” Borths says, and it survived for a long time after hyaenodonts evolved in Africa and spread to Asia and Europe. But as a hypercarnivore, which by definition is an animal that gets more than 70 percent of its calories from meat, it seems the predator was likely a casualty of rapid environmental change.

Modern hypercarnivores, such as lions, hyenas, tigers, and wolves, “are among the most endangered mammals we have, and part of the reason for that is they’re so sensitive to environmental disruption,” Borths says. Because hypercarnivore populations are relatively small compared to other organisms, they suffer most when the food chain begins to destabilize.

This story has been updated to correctly refer to Ohio University.