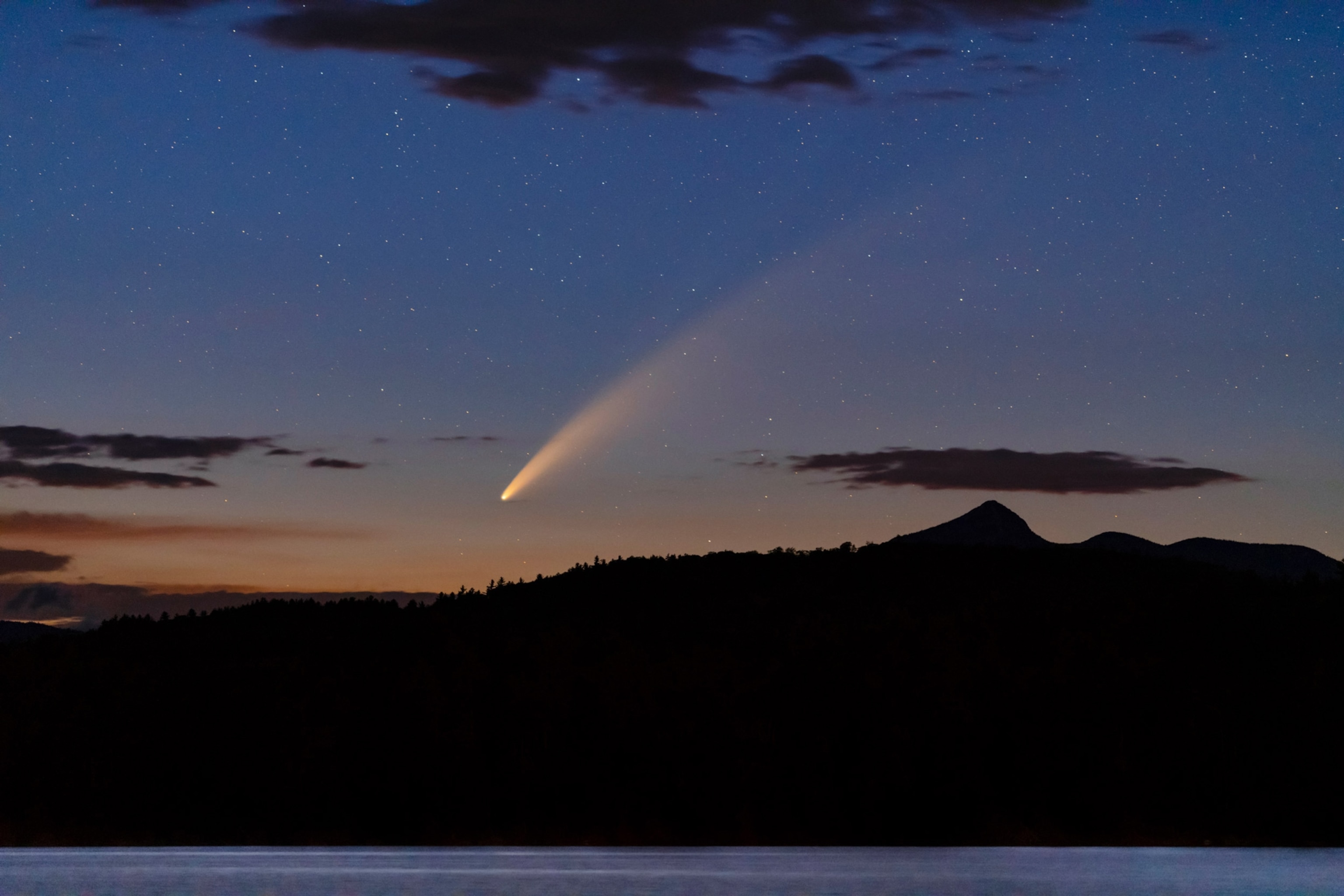 One of the brightest comets in decades is passing Earth. Here’s how to see it.

Comet NEOWISE is delighting professional astronomers and amateur stargazers alike, and it will be visible in Northern Hemisphere skies until mid-August.

Far from city lights in New Hampshire, the Comet NEOWISE put on a spectacle on Sunday, July 12. The comet tail was visible to the naked eye, but fainter and smaller than what you see in this single 15-second exposure.

A comet called NEOWISE is paying a visit to Earth’s neighborhood this month, and astronomers say it may end up ranking as one of the brightest comets seen in our skies in more than a decade.

The comet is currently bright enough to be seen with the unaided eye, if you know where to look. It’s already delighting sky-watchers across the Northern Hemisphere who have been rising before dawn to gaze at the glowing celestial traveler.

Chris Schur, an astrophotographer based in Payson, Arizona, describes the comet as “gorgeous.” When he trained his binoculars on it on the morning of July 7, he estimated that its tail spanned about five degrees in length, which is about 10 times the apparent size of the full moon. If the tail continues to grow, which astronomers say is possible, “it could be very dramatic,” Schur says.

For the next week or so, NEOWISE will be strictly a predawn target. To see it, head outside at least 45 minutes before sunrise and look just above the northeastern horizon. The bright star Capella can serve as a marker, as the comet lies just below it, while the brilliant planet Venus is visible to the east. In about a week’s time, the comet will transition to the evening sky, making it even easier to spot. Beginning around mid-July, the comet will be visible in the northwestern sky after sunset, arcing slowly upward beneath the stars of the Big Dipper.

To have the best chance of glimpsing the celestial transient, a little planning goes a long way. “It’s not like you’re just going to glance up and, Oh wow, there it is!” says Dave Schleicher, a senior astronomer at the Lowell Observatory in Flagstaff, Arizona. “You need to have a good idea of where to look—and binoculars will help.”

Still, judging by photos posted on social media over the past few days, the comet is putting on a quite a show—arguably the best since Comet Hale-Bopp, which lit up the night sky in 1997. Comet McNaught, which passed by Earth in 2007, was also brighter than NEOWISE is now, but it was primarily visible from the Southern Hemisphere.

“The buzz around this comet is justified,” says photographer Malcolm Park, who captured an image of NEOWISE and its tail from his home in eastern Ontario on the morning of July 5.

Flying close to the sun and Earth

Named for the space telescope used to discover it in late March, the comet’s full official moniker is C/2020 F3 (NEOWISE). It made its closest approach to the sun, known as perihelion, on July 3, and the fact that the comet is still visible at all has sky-watchers breathing a sigh of relief. Many comets don’t survive the heat of a close approach to our host star. Comets, often described as “dirty snowballs,” are made up of rock, dust, gases, and ice—a combination that doesn’t always hold together in extreme temperatures.

“As it comes closer to the sun, it heats up, it blows off all kinds of material, and you get a spectacular tail,” says Laura Danly, curator of the Griffith Observatory in Los Angeles. “But sometimes they just fall apart completely, and they disappear.”

NEOWISE seems to be a survivor, emerging from its encounter with the sun sporting a long tail of gas and dust. “We’ve already gone past that point of closest approach, and the comet is still there,” Danly says. “So we can hope for another month of good viewing.”

Several factors determine the comet’s brightness. Having passed the sun, it’s now reflecting less of the star’s light toward us, but it is also getting closer to Earth. NEOWISE will make its closest approach on July 22, when it comes within 64 million miles of our home planet. After that, it will gradually fade from view as it heads back to the outer reaches of the solar system.

To catch the best view, should you get up early to see the comet this week, or wait until later in the month when it’s more conveniently positioned in the evening sky? Many sky-watchers, fearing that the comet’s show may be fleeting, suggest setting a morning alarm and seeing the comet as soon as possible. And with many people feeling a bit stir-crazy due to the pandemic, a passing comet might be the perfect excuse to get outside and engage with nature, Danly says.

“Get your kids up early, if you have them, or get yourself up early, and go see this beautiful sight,” she says. “And maybe stay for the sunrise.”