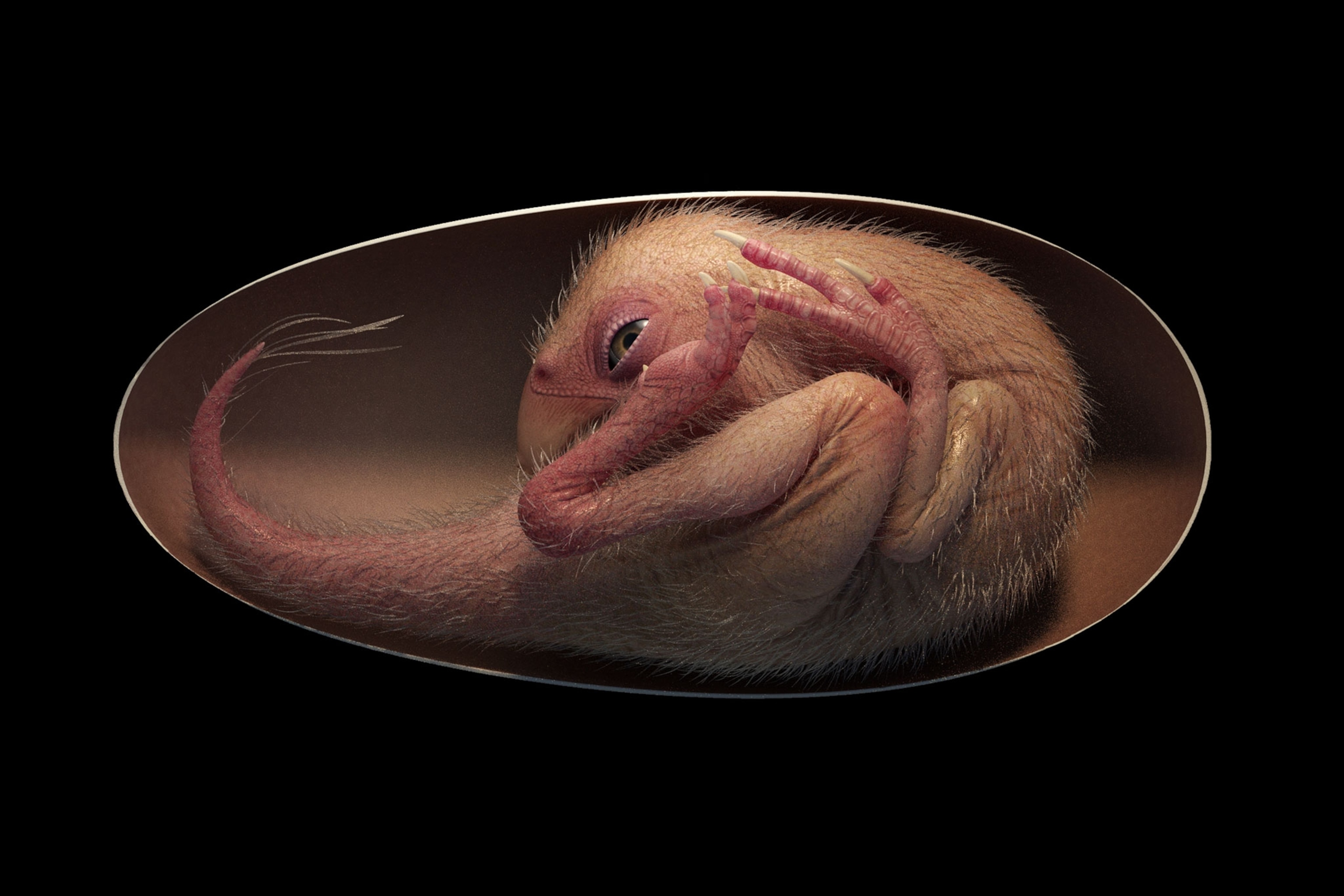 See a rare baby dinosaur curled up in its fossilized egg

One of the most complete dino embryos ever found shows the ancient infant tucked into a position that's strikingly similar to today’s unhatched chickens.

The baby dinosaur seemed almost ready to burst free from its shell, curled up so tightly its head tucked between its toes. But an unknown event buried the egg before the small creature ever took its first breath, preserving the unhatched animal for tens of millions of years in what is now southern China.

The stone mining company Yingliang Group discovered the egg in 2000, but another 15 years passed before anyone realized the significance of the find, when a few fragile bones exposed by a crack in the egg's surface hinted at the prize inside.

As scientists report this week in the journal iScience, nestled under the fossil egg's dimpled surface is one of the most complete dinosaur embryos ever found.

"I couldn't believe my eyes because it is so perfectly preserved," says study author Darla Zelenitsky, a paleontologist at the University of Calgary who specializes in dinosaur eggs.

Dubbed Baby Yingliang, the infant dino comes from rocks estimated to be roughly 70 million years old, though its precise age remains uncertain. The embryo is a type of oviraptorosaur—a group of beaked therapod dinosaurs closely related to modern birds that lived about 130 million to 66 million years ago. These creatures share many traits with their avian relatives, and the embryo hints at one more: a curled pre-hatching position.

"It's remarkable to get a glimpse into the very first stages of life of animals that lived more than 70 million years ago," Lindsay Zanno, head of paleontology at the North Carolina Museum of Natural Sciences and a researcher at NC State University, says via email. "The evidence that birds are living theropod dinosaurs is, at this point, overwhelming."

The remarkable egg was rediscovered in 2015 when Yingliang staff were sorting through the company's fossil finds with plans to open a natural history museum. The egg is slightly longer than an ostrich egg but pill-shaped, and its surface was fractured, allowing a worker to spot a few bits of bone.

"In that moment he realized there might be [an] embryo inside," says study author Waisum Ma, a doctoral researcher at the United Kingdom's University of Birmingham.

A technician carefully chipped away one side of the fossil and cleared out some of the sediment filling the egg to reveal the young dinosaur curled up in death as it would have been in life. Realizing the significance of the discovery, Yingliang reached out to the study's lead author, Lida Xing of the China University of Geosciences in Beijing, who began assembling a team to study the exquisitely preserved baby dino.

While many dinosaur eggs have been found, embryos are rare—and well-preserved embryos are even rarer still. "They're mostly these jumbles of bones at the bottom of an egg," says Matthew Lamanna, a paleontologist at the Carnegie Museum of Natural History in Pittsburgh who was not part of the study team.

Only two other nearly complete oviraptorosaur embryos have yet been found, Ma says. "Wow," she recalls thinking when she first saw images of the fossil. "This is the best dinosaur embryo I've ever seen." Just a few parts of the skeleton seem to be missing, she says, including a forelimb and a section of the tail.

For other fossils, scientists have used CT scans to reveal details of the bones hidden inside. However, the type of sediment filling the egg made it difficult for scientists to discern the bones from the background. Still, the team was able to carefully study the exposed surface of the fossil, comparing it to the other two oviraptorosaur embryos previously found.

Baby Yingliang's head lies along its belly, with its knees bent near where its tiny forelimbs would sprout. Its curved back lies at one end of the egg, where a gap hints at an air sac now long gone. All these features are similar to modern chicken embryos, which slowly curl into tight balls as they develop, leading to the chickens' heads nestling under their right wings. Known as tucking, the series of poses is key to successful hatching.

While Baby Yingliang isn't as tucked as a chicken just about to break free of its shell, "it's getting there," Zelenitsky says. The slightly different positions of the two previously found oviraptorosaur embryos may show the chicken-like shifts in pose during development. The team posits that birds’ tucking behavior can be traced back millions of years to baby oviraptorosaurs.

The find adds to the variety of behaviors and physical traits thought to be passed from theropod dinosaurs to modern birds, such as the recent discovery of an oviraptorosaur crouched like a brooding bird over its clutch of eggs. While Baby Yingliang's "birdie behavior" isn't necessarily surprising, Lamanna says, such fossils are vital to truly grasping evolution's twists and turns.

"We can speculate until the cows come home," he says. But without fossils displaying the evidence, these early behaviors remain speculation.

The fossil may hold even more clues to the evolution of modern birds, adds paleontologist Timothy Rowe of the University of Texas at Austin, who was not part of the study team. For example, a key step in bird evolution is the transition from forelimbs to wings lengthy enough for flight. Exactly how—and how many times—this change happened in dinosaurs remains uncertain. But clues to these evolutionary transformations can be found in animals’ early development, he says. "They really start to play out inside the egg."

A big challenge is that the rarity of well-preserved embryos makes it tough to draw firm conclusions, Ma says. But that may soon change: The company that discovered Baby Yingliang also found other eggs at the same site. "So there might be more embryos," she says, and thus more clues to the ancient origins of the birds that soar, glide, and waddle around the planet today.