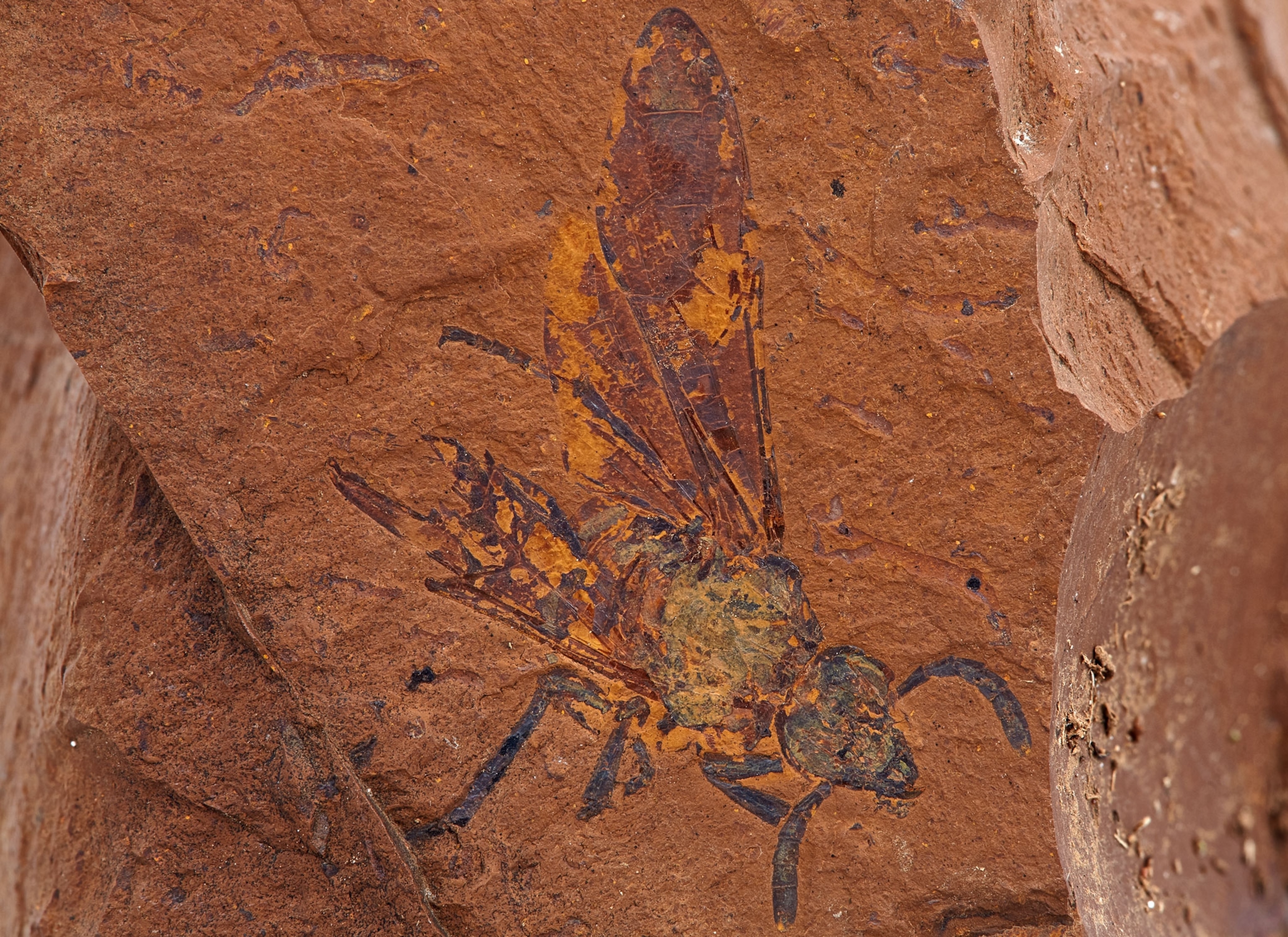 See the spectacular fossils from a newly discovered prehistoric rainforest

Hundreds of amazingly well-preserved finds from Australia include plants, insects, fish, and more that existed more than 11 million years ago.

This sawfly lived in what is now southeastern Australia between 16 and 11 million years ago, and grains of pollen are still preserved on its head—a snapshot of life in an ancient rainforest.
Michael Frese

Some 16 miles outside of the town of Gulgong in southeastern Australia, landowner Nigel McGrath spent one day a few years ago working a particularly tough part of his fields. The patch of land was strewn with heavy, iron-rich rocks that menaced his farm equipment, so McGrath had to haul the loose blocks into piles by hand. That’s when he noticed them: immaculately preserved fossil leaves, tucked into the rocks like pressings in a book of stone.

Now scientists have confirmed that these ironstones—strewn over an area no bigger than half a football field—contain one of the most astonishing records ever found of life in an ancient rainforest.

Unveiled in the journal Science Advances, the site—known as McGraths Flat—is one of only a few places in the world that preserves rainforest ecosystems dating back to the Miocene epoch, a time period that lasted from 23.03 million to 5.33 million years ago. During this time period, the world saw massive ecological change, and Australia started transitioning from mostly rainforest—like the modern-day Amazon—to the shrubby, grassy drylands we see today.

There are other Miocene fossil sites in Australia that are famous for mammal and reptile bones, but these sites don’t always preserve the innumerable small, squishy things that form an ecosystem’s foundation. McGraths Flat has an abundance of these smaller fossils, chronicling an astoundingly diverse rainforest that grew in New South Wales between 16 million and 11 million years ago.

At McGraths Flat, spiders fossilized down to their leg hairs, and fossil fish are still engorged with bellies full of midges. Leaves are preserved with such fidelity, researchers can see the pores they once used to suck in CO2.

“The exceptional quality and quantity of the material discovered is remarkable, as is the biological and ecological information extracted and presented,” says University of New South Wales paleontologist Suzanne Hand, an expert in Miocene fossils who wasn't involved with the new study.

The McGraths Flat fossils even contain snapshots of life in action. One sawfly’s head was covered in pollen, presumably after feasting on a flower’s nectar. One fish’s tail held a passenger: the parasitic larva of a mussel, which subsisted on the fish’s slime as it hitched a ride upriver.

“Because of the quality of preservation, we can see into these ecosystems like never before,” says Matthew McCurry, a co-lead author of the new study and paleontologist at the Australian Museum Research Institute in Sydney.

McCurry and his colleagues first heard of the site from McGrath in 2017. Once they realized the potential significance of the fossils, they began visiting the site for three to four days at a time, cutting up their hands on the flint-like rocks to get glimpses of an ancient rainforest.

The more the scientists analyzed the site, the more they realized just how unusual the mode of preservation was. The fossils were all entombed in extremely fine layers of an iron oxide mineral called goethite. Fossils have been found in these kinds of rocks before, but the quality of the McGraths Flat specimens stands out.

“This is a type of preservation that has either been overlooked or not given much attention,” says study co-lead Michael Frese, a virologist at Australia’s University of Canberra who also studies microfossils. “If you would have asked a person: ‘Do you really expect great fossils in ironstone?’ They may have said: ‘Silly you!’”

Frese adds that the unusual type of fossilization makes the McGraths Flat fossils especially easy to analyze with scanning electron microscopes (SEM), some of the most powerful microscopes available. Generally, samples being put under an SEM have to be coated in thin layers of gold or platinum, which can restrict future research on those samples. But the McGraths Flat fossils are already so iron-rich and conductive, they can be placed directly beneath an electron microscope without any extra preparation.

“The fossil goes into the SEM exactly how it comes out,” Frese says.

Already, the smallest fossils have yielded some astonishing finds. In the site’s only known fossil feather, researchers can see sacs of the pigment melanin, whose shapes suggest the feather may have been dark or iridescent in color. Scientists also can see melanin preserved in the eye of a fossil fish, and they even found a single scale shed from a butterfly or moth’s wing more than 11 million years ago.

A lake flooded with iron

The team’s current thinking is that McGraths Flat was once an oxbow lake that formed when part of a meandering river was cut off. Most of the time, the lake was fairly quiet, with low oxygen levels and few predators. But judging from more than a dozen fish fossils recovered from the site so far, fish and other riverine creatures periodically washed into the lake, perhaps when the nearby river flooded its banks.

McCurry and Frese suspect that iron from nearby basalt deposits dissolved into water passing through the weathering rock. This iron-laden water then reached the underground water table and eventually leached sideways into the oxbow lake.

Whenever fresh, highly oxygenated water entered the lake—perhaps through torrential rains or floods—the iron ions could no longer stay dissolved and rapidly formed goethite on the lakebed floor. These rapidly precipitating minerals then buried whatever leaves or carcasses happened to have sunk to the bottom of the lake. Over time, goethite replaced the buried soft tissues, recording their shapes in the fossils we see today.

The team has some reason to think that the lake’s goethite cycle may have been caused by seasonal monsoons. Of the hundreds of fossil flowers found at McGraths Flat so far, most of them died before they had bloomed, suggesting that the burials occurred during a consistent time of year. The team also has many fossils of insects that, in modern ecosystems, are seen only in the spring and summer.

The researchers have much more to do to test their ideas, as well as to analyze the treasure trove of fossils they have already found. McCurry and Frese are eagerly trying to refine estimates of the fossil site’s age, which could help researchers better understand how McGraths Flat transformed from a tropical rainforest into a dry shrubland—a clue about how rainforests may respond to changing climates today.

Windows to the past and future

During the early and middle Miocene, atmospheric CO2 levels were roughly 400 to 500 parts per million, similar to estimates of near-future CO2 levels brought on by human activity. The Miocene also saw sustained warming periods, such as the mid-Miocene climatic optimum 17 to 14 million years ago, which may have overlapped with the slice of time recorded at the McGraths Flat site.

“These results may help to better understand future changes in rainforest ecosystems faced with anthropogenic global warming,” says Bo Wang, a paleontologist at the Chinese Academy of Sciences who wasn’t part of the new study. “This paper shows that the tropical biotas reached at least 37 degrees south in Australia, but we do not know when they came and left. What is the driving mechanism?”

To learn more about the transformation at McGraths Flat, McCurry and Frese plan to return with a wish list of additional fossils they hope to find. “We know that a feather of a bird preserves really well—but we want the whole bird, and when we do find a bird, we know that it’ll be immaculately preserved,” McCurry says.

But even as the team looks for more fossils, the researchers will be plenty busy with the dazzling specimens they’ve already found, McCurry says. “We’ve literally got a decade’s worth of work ahead of us.”