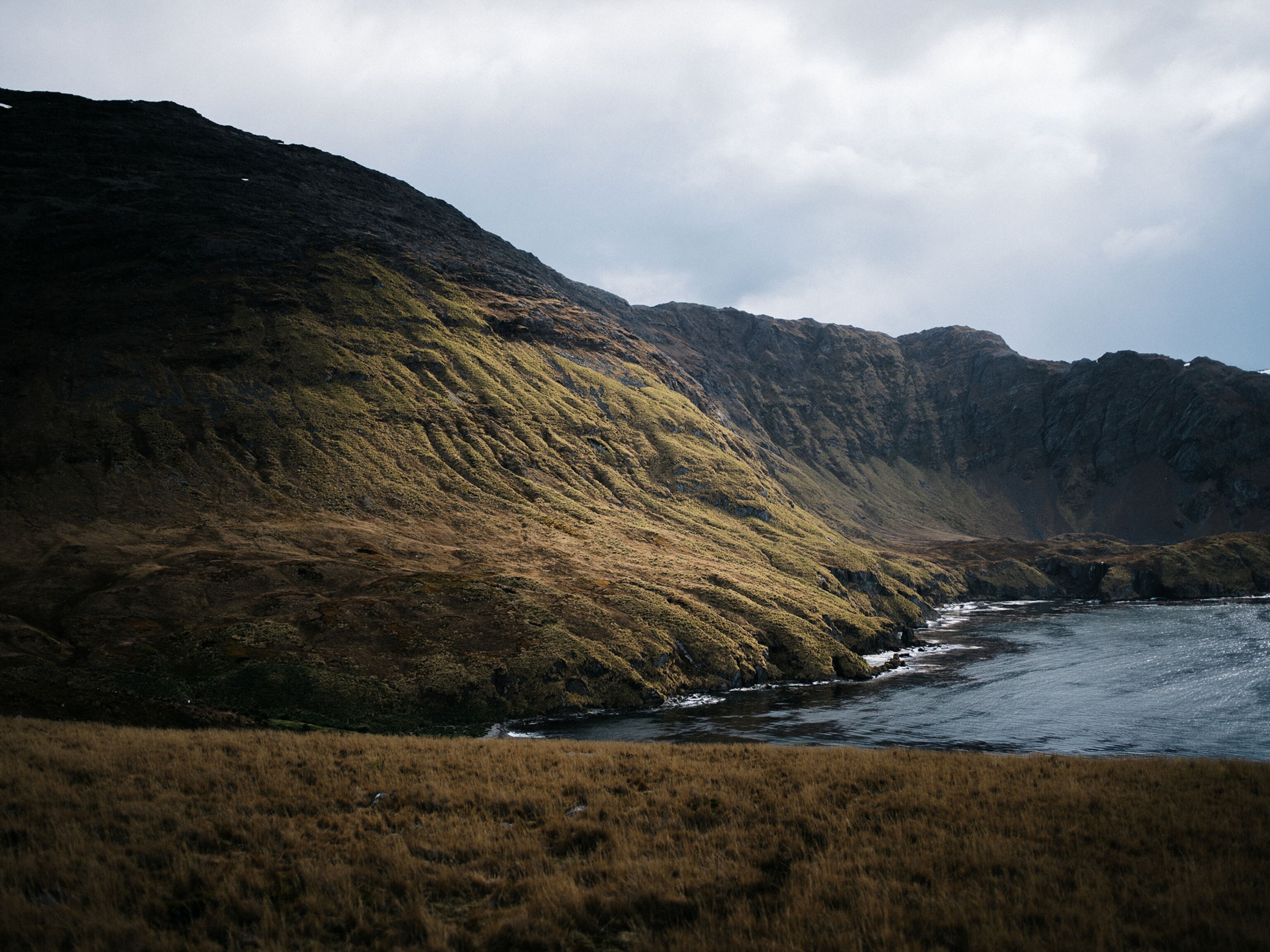 A rare, multi-part earthquake that disturbed waters in three oceans is helping scientists understand how different types of quakes can trigger tsunamis.

The remote South Georgia Island, pictured here, is the closest inhabited landmass to an unusual earthquake that sent tsunami waves rippling around the world. South Georgia Island and the uninhabited South Sandwich Islands, where the quake occurred, together make up a British Overseas Territory in the southern Atlantic northeast of Antarctica.

When a mysterious series of temblors emanated from the uninhabited South Sandwich Islands, scientists all over the world found themselves scratching their heads in confusion.

First a magnitude 7.5 earthquake struck under the islands, a British Overseas Territory in the frigid waters of the southern Atlantic Ocean. Three minutes later, a magnitude 8.1 quake shook the region again.

These rumblings, which occurred on August 12, 2021, were not unusual on their own, since the islands sit atop a combative meeting of tectonic plates. The odd part is that they were followed by a tsunami powerful enough to show up on distant shores along the Atlantic, Pacific, and Indian Oceans. Although the swell wasn’t destructive, it was the first since the catastrophic tsunami of 2004 to be recorded in three different oceans.

While certain types of earthquakes are known to cause tsunamis, the initial depth estimates for these quakes suggested they were too deep to sufficiently flex the seafloor and push a vast volume of water forth. “It was a big mystery, and a big challenge for the seismological community,” says Zhe Jia, a graduate student of geophysics at the California Institute of Technology.

After spending months untangling this enigmatic earthquake sequence, Jia and his colleagues think they have figured out what happened. In a study published this month in the journal Geophysical Research Letters, the team concluded that there were actually five major ruptures that day, the components of a single powerful quake that took place within a few minutes of each other. One of these ruptures, previously buried in the noisy seismic signals, was powerful and shallow enough to trigger the multi-ocean tsunami.

By deciphering this strange seismic event, geoscientists can develop a better understanding of how earthquakes generate tsunamis. “We rely heavily on initial seismic estimates to make a guess about whether an earthquake triggered a tsunami,” says Judith Hubbard, a structural geologist at the Earth Observatory of Singapore who was not involved with the study.

“I think the event is telling us more that our tsunami detection systems might not be good enough.”

The odd series of quakes has also made researchers wonder if we will ever fully grasp the many intricacies of our planet. “As time goes on, and we see more earthquakes, they tend to just get weirder and more complicated,” says Stephen Hicks, a seismologist at Imperial College London who was not involved with the study.

Deep below the isolated South Sandwich Islands, the South American tectonic plate plunges beneath the South Sandwich plate at a modest speed of 2.8 inches a year. The uneven grind between these two plates causes stress to build up over time. Sometimes that stress is released in earthquakes—including the kind that can generate tsunamis.

These large coastal waves are usually made when something displaces a lot of water. In this case, “the thing that triggers a tsunami is the deformation of the seafloor,” Hubbard says. But a quake here needs to be shallow enough for a tsunami like this to happen.

The magnitude 7.5 quake on August 12 occurred at a depth of 29 miles, so it “was very unlikely to have generated the global-spreading tsunami we observed much later,” Jia says. The magnitude 8.1 event just after was a slightly more suspicious event, with a shallower depth of 14 miles.

But the seismic signals from this earthquake sequence were seriously messy. The two quakes struck nearby one another in very rapid succession. The data are a bit like a recording of one person talking when another person starts shouting over them, creating a lot of indecipherable noise. Automated systems struggled to produce consistent values for the magnitude, location, and depth of the second temblor.

“We thought that we were all missing something,” Jia says.

Over the next few months, Jia and his team untangled that day’s messy web of seismic waves, removing interference and pinpointing individual ruptures within the chaos. Ultimately, they found that there weren’t two major ruptures involved in this event, but five, all striking within just 260 seconds.

“In a first-order sense, this is a single earthquake,” Hicks says. It was just complicated—and powerful. “It ruptured the vast proportion of this subduction zone.”

The third rupture in the rock, however, sandwiched between the other four, stood out. Registering as a magnitude 8.2 event, it was extremely powerful, unleashing the majority of the entire five-part quake’s energy. It was also slow, taking 180 seconds to transpire. That was partly why it remained hidden for so long: The team wasn’t using the right kind of seismic searchlight.

The shapes of seismic waves from slower quakes are different from the sort you typically get with sudden ruptures. When Jia changed the filters on the data recorded by a global network of seismographs to search for far slower ruptures, the event suddenly jumped out.

In addition to being more powerful and longer lasting, this quake was quite shallow, with a depth of just 8.5 miles—perfectly capable of creating a global tsunami.

Earthquakes are rarely as straightforward as they initially appear. Sometimes, as with New Zealand’s 2016 Kaikōura earthquake, that complexity is plain to see. Like a rocky Rube Goldberg machine, the quake featured a rupture that jumped between a dozen different faults. But that quake’s puzzles could be more easily solved.

“In that case, you’re talking about surface rupture,” says Kasey Aderhold, an earthquake seismologist at the Incorporated Research Institutions for Seismology who wasn’t involved with the new study. “It ruptures all these different faults, and they’re right up top. We can walk around on them and look at them.”

Not so for the South Sandwich Islands’ strange quake of 2021. “It’s deep, it’s under the ocean, it’s in a pretty remote place. You can’t touch it or walk around on it,” Aderhold says. There is no geophysical monitoring station on these islands, no ocean-bottom seismometers listening to the creaking subduction zone.

The researchers were only able to untangle the geological workings thanks to the Global Seismographic Network—an open-access, planet-wide network of 152 seismometers jointly operated by the U.S. Geological Survey and the National Science Foundation. “It’s really important,” Jia says. Without its nodes recording the seismic rumbles coming from remote earthquakes, strange events like this one would be impossible to decode.

As with most complex quakes, some mysteries remain. The magnitude 8.2 rupture most likely triggered the tsunami, but the specifics aren’t yet clear.

“A lot of tsunamis actually involve submarine landslides, which can be triggered by earthquakes,” says Robert Larter, a marine geophysicist at the British Antarctic Survey. “I’m personally wondering if that’s the case here.” The only way to check would be to peruse the seafloor—perhaps with a sonar-equipped boat, or with robotic submersibles—and compare its appearance to older bathymetric maps.

Geologists also wonder whether the subduction zone under the South Sandwich Islands could continue to unleash strong quakes. Last year’s rupture was expansive and potent. “Does this mean that this probably won’t rupture in such a large event for another, what, 500, 1,000 years?” Hicks wonders. A lack of instrumentation in the region makes this “a really difficult question to answer.”

The good news is that this quintuple quake’s discovery will bolster scientists’ ability to see similar events coming next time. “This offers the opportunity to detect these kinds of slow-rupture events from the seismic data, and with that we could more quickly and accurately trigger warnings,” Hubbard says.

The bad news is that this won’t be the last time an earthquake bamboozles scientists hoping to offset their more destructive elements. As Larter puts it: “The natural world is full of surprises.”