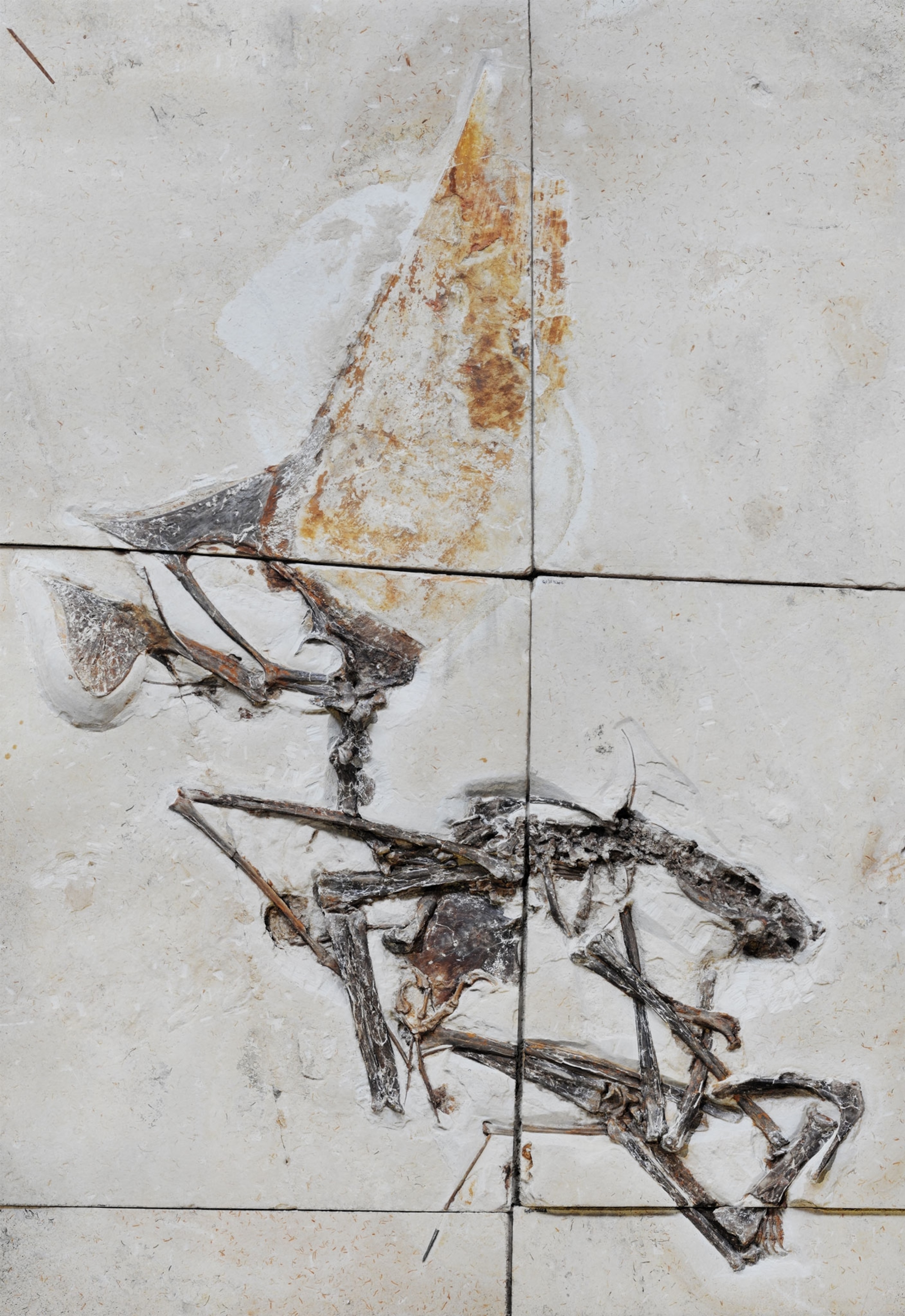 The nearly human-size pterosaur from Brazil had a gargantuan head crest and was likely a better walker than a flyer.

Entombed in limestone blocks, the newly studied fossil is the first nearly complete skeleton of a pterosaur species that was first described in 2003.
Photograph by Victor Beccari

Hidden in barrels and loaded on trucks, thousands of limestone slabs were set to be smuggled out of Brazil in 2013. Taken from a quarry in the country’s renowned Araripe Basin, these were no ordinary rocks. They contained preserved remains and impeccable imprints of creatures that lived millions of years ago.

Bound to be sold to museums and potentially private collectors around the world, the fossil bounty would have fetched its poachers thousands of dollars, if not more. Instead, police raids that were part of an investigation codenamed Operation Munich intercepted the illegal export and sent nearly 3,000 of the seized specimens to the University of São Paulo.

Among the relics was a bizarre winged reptile, nearly four feet tall with a jaw similar to a bird’s beak and larger-than-life headgear. Now scientists report it to be the first nearly complete skeleton of the pterosaur species Tupandactylus navigans, which lived during the early Cretaceous period, roughly 110 million years ago.

“I’ve seen many exceptional, beautifully preserved pterosaurs in Brazil and abroad, but specimens like this one, which is nearly complete and articulated, with soft tissue preservation, are scarce,” says Fabiana Rodrigues Costa, a palaeontologist at the Federal University of ABC in São Paulo, Brazil, and co-author of the study published today in the journal PLOS ONE. “It’s like winning a lottery.”

The species was first described in 2003 by scientists from Germany and England using two skulls. But this is the first time palaeontologists have been able to study the rest of the animal’s body, including some soft tissues and the neck, wing, and leg bones. The findings could one day help resolve an ongoing debate about how the gargantuan crests on these reptiles’ heads may have affected their flying abilities.

Ancient reptiles of the sky

Pterosaurs were close cousins of dinosaurs and lived alongside them. While dinosaurs flourished on land, pterosaurs ruled the skies. They co-existed from the late Triassic period, more than 200 million years ago, until the end of the Cretaceous period 66 million years ago, when both groups went extinct in the global calamity sparked by an asteroid strike.

But pterosaurs have no living descendants, unlike dinosaurs, which are survived by birds. Fossils are the only window into the looks and lives of these prehistoric flying creatures, and pterosaur fossils are extremely rare. Their delicate bones preserve poorly, often yielding only fragments of a skeleton.

Palaeontologists have recovered pterosaur remains mainly from sediments that were once submerged underwater. The soft mud rapidly buried carcasses after they sank to the bottom of lakes or seas, and low oxygen conditions there limited their decay.

Brazil’s Araripe Basin, which was once covered in saline lagoons but is now arid and scrubby, yields many exceptionally preserved fossils entombed in layers of limestone. “You open the stone like you’re opening a book, and inside those pages you’ll find fossils,” says palaeontologist and study co-author Felipe Lima Pinheiro at the Federal University of Pampa in São Gabriel, Brazil.

Twenty-seven of the more than 110 known pterosaur species have come from this region. The tapejarids are among the most diverse and abundant groups, particularly those in the genus Tupandactylus, which all have oversized, flamboyant head crests.

While the Araripe Basin is fossil-rich, Pinheiro says that pterosaur fossils aren’t commonly found, let alone a nearly complete one. The illegal fossil trade doesn’t help. Specimens often end up in the hands of foreign buyers as opposed to Brazil’s museums and research institutions.

In 2014, when the Tupandactylus navigans specimen came to the University of São Paulo, its skeleton was embedded in six beige-colored limestone slabs. Victor Beccari, a graduate student affiliated with the university and lead author of the new study, first noticed that the pterosaur’s headgear accounted for nearly three quarters of its skull. “It’s so huge for the animal size, like a peacock’s tail,” he says.

To scientists who described Tupandactylus navigans in 2003, the cranial crest resembled windsurfing sails and thus a propulsion system for aiding flight. For that to be possible, they envisioned an animal with a short neck and bony tendons locking the neck vertebrae together.

With access to the full skeleton, Beccari and his colleagues were able to investigate the animal’s suitedness for flight. The team generated a three-dimensional model of the skeleton using a computed tomography (CT) scanner to x-ray the ancient bones.

It turns out that Tupandactylus navigans had a long neck, long legs, and comparatively short wings. The findings suggest that the animal was a better walker than it was a flyer. The creature’s extravagant cranial crest—possibly an ornament for sexual display—would limit it to undertaking short-distance flights, possibly to flee from predators.

For now, thanks to the police raid, scientists and the general public all have the ability to see Tupandactylus navigans with their own eyes: Its remarkable skeleton has been on display in São Paulo’s Geosciences Museum since 2017.